Pilanesberg is balm for the soul

‘How does the glove fit?’ Pretty well, I was thinking – if you’re a boilermaker. The thick asbestos glove lined with leather was never going to fly on the Paris runways, but then those dainty kidskin efforts didn’t have to save your life.

Below, the admittedly beautiful Magalies range stretched out, the bottom of the gorge a very long way away. Between it and me was nothing but a couple of slender steel cables, disappearing down the gorge, across to (apparently) platform five. Figuratively of course, the glove didn’t fit at all.

‘This is the fastest stretch,’ said the guide. ‘So remember to use the glove as a brake, pulling down on the cable behind you. Not in front, hey. If you do that you’ll lose a finger.’ Charming.

Three, two, one, into the hands of fate. A whirring sound, the wind on my face and, good grief, it worked. This was fun. I knew the Magaliesberg Canopy Tour wasn’t going to kill me but it still came as a surprise when it didn’t. 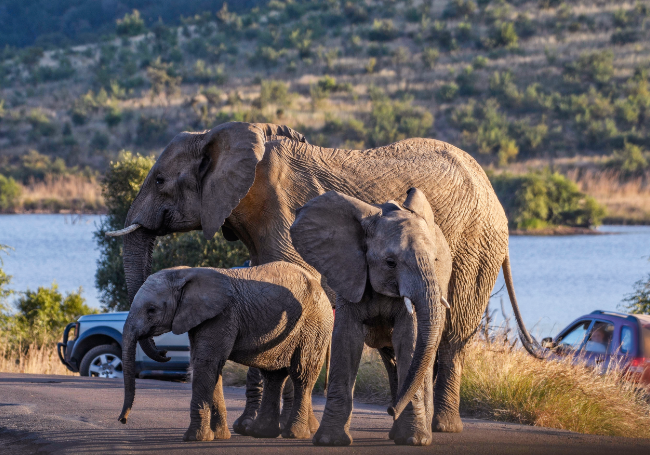 A few weeks before, the plan had been to head for the Pilanesberg National Park, but instead of an eyes-closed, hell-bent rush for the reserve, I decided to take it slow and wind through the Magliesberg first. Hence the (not-so) near-death experience. The Magalies region has seen an explosion of growth in the past decade as Joburgers flee ever further westwards. It had once been my quaint little escape from the city, a few artists and a jar or two of homemade jam down a dusty lane. Not so anymore – I wasn’t sure my old friend would be recognisable.

First stop, Maropeng, home of Neanderthals, weird boat trips and a little guy named Karabo. The Cradle of Humankind has in large part spearheaded the Magalies region’s growth. Thank Karabo for that. Karabo? He’s a juvenile hominid skeleton of the new Australopithecus sediba species, a tiny nine-year-old who is actually 1.95 million years old. He is potentially (another) link between us and the apes, if you follow the science. Certainly his weird little hands – part ape, part human – are oddly familiar. He’s a reminder that the area is one of the oldest stable geological regions in the world, some 2 400 million years old and linked to the Waterberg further north.

Maropeng of course is younger, but just as timeless. There’s no way to describe the brilliantly conceived interactive displays that trace man’s development through the millennia – it has to be seen and experienced to be fully appreciated. Certainly chatting to a dodo on the phone and the boat trip through the ice ages are highlights.

Maropeng behind me, it was time to check in with a good friend over at Die Ou Pastorie on the R560 in Skeerpoort. An old converted African rectory is hardly the place you would  expect to find a thriving music scene (COVID notwithstanding) but there you go. Susan Rothbletz is a force of nature, keyed in to live music of all kinds: jazz, classical, bands. And they love trekking out to the Pastorie, those artists – the simple life a panacea for all things city. It’s cosy, unpretentious, fresh and clever, a million miles away from the lapa-and-built-in-braai brigade endemic to the area.

The next day, it was cheese I had on my mind. A few kilometres away, also on the R560, the Van Gaalen cheese farm has been, well, churning out boerenkaas, or matured Gouda, since 1990. Annelies van Gaalen and her husband Erik have steadily grown the business, adding a restaurant, conference facilities and, more recently, mountain bike tracks. They are big business. Since opening the Skeerpoort mountain bike trail, Erik has added 130 km to it, crossing 50 farms. It now hosts a clutch of important races, including the Cradle Quest. The cheese factory itself is small, a few rooms visible through large windows, and all the cheese that’s produced (not every day) is sold on-site, which means you have to go to the farm to buy it. A good idea – it’s delicious; the boerenkaas especially is tangy, creamy and, much like the farm, stays with you long after you’ve left. Maybe it was the excellent cheese or perhaps just the beauty of the day but the next stop, the Margaret Roberts Herbal Centre, appeared to glow. The doyenne herself is no longer with us, but her spirit lives on in her daughter Sandy, determined to carry on the legend’s work. Over the years Margaret engineered a vista that features every kind of edible or useful plant imaginable. It’s all labelled and beautifully laid out. The gardens are open by appointment and Sandy’s epic scones are part of the deal.

Susan Rothbletz, Margaret and Sandy Roberts… Strong women are well represented down the R513. Add another to that list – the namesake of the Ann van Dyk Cheetah Centre, now 90, may have handed the reins to her nephew Eric, but her presence is everywhere. Research is as important as the interactive part of the farm, and from that work came the understanding that the darker King cheetah is simply a recessive gene and not a separate species. The centre’s guided tour starts with a cheetah race – or rather cheetahs that chase a lure on a track, much like greyhound racing.

Suitably impressed by the flash of spots that rocket past, groups then climb on board a safari vehicle and cruise through the reserve, seeing all manner of creatures, from African painted dogs to the rare African cat and a multitude of vulture species. It’s lots of fun and there’s even an opportunity to have your picture taken with what the centre calls their ambassador cheetah, a regal beast indeed. The kids love it and the Welsh tourists nearly fainted with delight.

From the cheetah centre, the road to the Pilanesberg winds through the ancient landscape, clogged as it is with mining concessions and informal settlements. It’s good to see the Sun City signpost, and I finally turn off, aware  that just beyond Sol Kerzner’s ode to all things glitzy lies a wilderness of unspoiled simplicity. And so it is; once inside the park it’s as if time has stood still. 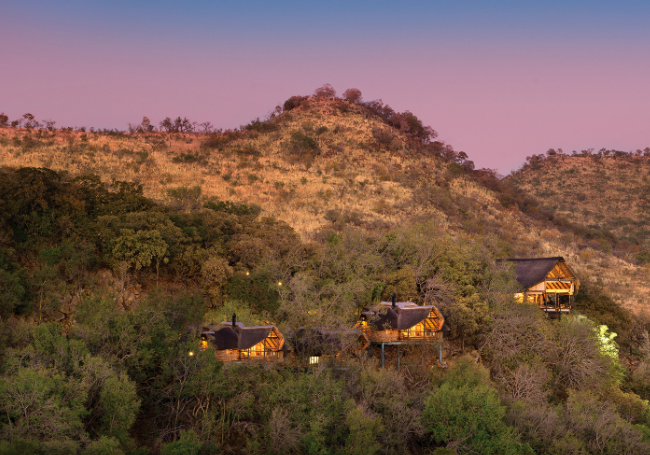 There’s something eternal about the various Highveld biomes, as if you can smell – almost touch – the age. To know that very little has changed for close on 2 400 million years is both heartening and terrifying. Certainly it’s humbling. My destination was Tshukudu Bush Lodge, the more exclusive of the two Legacy Hotel properties in the park (Bakubung is the other). Six luxury chalets, all with their own amenities, views and service, make it hard to beat for pampering, certainly in the park. Each is individually designed and decorated beautifully too, and if the intention, like me, is to base yourselves there and explore the wider park, make sure to leave enough time to enjoy the many comforts of the lodge itself.

My aim though was to track down the legendary vet, photographer and activist Johan Marais, forever bound to Pilanesberg by his work with its elephants. Pachyderms are of course central to Pilanesberg’s appeal, and the reserve has a long and noble history with the behemoths. Marais is the elephant whisperer, if there ever was one, though he’d hate the moniker. Years before, trailing tuskers in the Zambezi valley, he had told me the story of Owalla, an elephant in Pilanesberg, and ever since then I’d wanted to track her, see the remarkable beast. The story? Owalla had a large wound that needed attention. Marais was called to do the business and, because of a complication, had to operate without anaesthetic. To find and then calm the animal, authorities flew in the previous owner, Randall Moore from Abu Camp in Botswana. Owalla hadn’t seen Moore in 16 years but instantly identified him and obeyed his commands, formulated all that time ago. 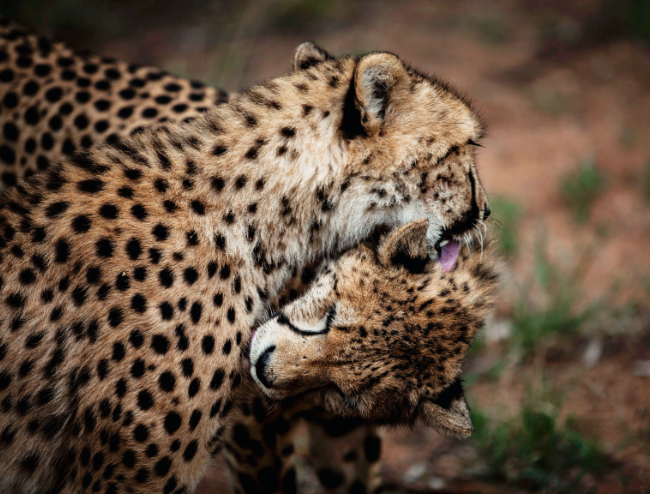 How did she remember? Marais had an answer for that, and I’ve never looked at an elephant quite the same again. Elephant brains are very much like ours, with an extra-large hippocampus, the area where long-term memories form. Like us, they accumulate memories over time, rather than relying on instinct, because they have much to remember as they grow (the location of water, food over long distances, much of their social behaviour). I wanted to ‘meet’ Owalla.

Dawn on the second day and the news was mixed – Marais had been called away to a rhino emergency upcountry, but Owalla might just be in the area. She was a matriarch now, her circus and Botswana days well behind her. And so it was, some two hours into a drive that the Elephant That Remembered appeared, grazing happily, with a nursery of calves playing at her feet in the dust. In a world of bad news and tragedy, disease and distancing, here was a moment of triumph, a simple win.

Ancient beast in an ancient land, the rustle of leaves, deep thunder of the herd’s gossip. What a continent, what a park, what a moment. A special place, the Pilanesberg.