There’s an inherent contradiction in the droptop market – in tough times convertibles are generally the first to disappear off the radar (SUVs rule the roost at the moment) but, let’s face it, cabriolets make the world a better, happier place. Escapism? Box ticked. Stress buster? Ditto. The open-top car with the retractable roof has come a long way since the early days of the Peugeot Éclipse Décapotable of 1934, but one thing has never changed; the desire to be, ironically, free of the motorised box, out in nature. It’s a powerful urge and one that manufacturers tap into, as much for marketing their brands as selling the actual cars themselves. Happily it means convertibles are unlikely to be going anywhere soon. Good news for car lovers everywhere.

Mercedes-Benz
Of the premium brands playing in the droptop pool, Mercedes-Benz is the deep diver, with a wide range of models catering to most tastes and peculiarities. The big news is that the new SL – arguably Merc’s most iconic cabriolet – will make it to SA, but not anytime soon (2021). In the meantime the marque has quietly dropped the existing model, largely in deference to the slew of other, more contemporary offerings. When the SL does arrive it will boast all of its brethren’s digital fireworks, but will need to work hard to differentiate itself from the barnstormer AMG GT and uber-chic S-Class Cabriolet, both superior to the SL in dynamics (the GT) and comfort (S-Class).Observers see the SL conundrum as typical of the current hyper segmentation trend; what is the SL’s point of difference over the S-Class Cabriolet? Especially if, as insiders are predicting, the new SL gets two extra seats like the S-Class Cabriolet. Tricky.

The rest of Stuttgart’s topless troupe is aimed at an ever-changing world where convenience is as important as status. A quick release roof, airtight construction, full passive and active safety kit and a digital smorgasbord are all standard essentials. Starting with the tots, the evergreen SLC (the old SLK) journeys on, represented in SA by the AMG SLC 43, the smallest cabriolet available from Mercedes. Up the ladder, the C-Class, E-Class and S-Class all have topless representation, most flying the performance-orientated AMG flag. The range includes the E53 Cabriolet, one of the most complete Mercs in years, featuring the sublime AMG 3.0-litre turbocharged inline 6-cylinder, which pumps out 320 kW of power and 520 Nm of twist. It’s not as wieldy as the S-Class Cabriolet, the lightness making for a class-leading ride, while the performance is more than enough to scare the in-laws in the back. Every manufacturer has an over-achiever (if they’re lucky) and this is Merc’s. Great car.

Aston Martin
Few marques garner as much press as Aston Martin, especially in a Bond year (the DBS Superleggera and futuristic Valhalla will feature in April’s No Time to Die, along with a selection of vintage Astons). For (wealthy) ordinary mortals, Aston’s 2020 offering is the latest Vantage Roadster, the droptop version of the already gorgeous coupé. British as a pork pie and Worcestershire sauce it may be, but the engine is German; it’s no secret that Gaydon’s choice is an AMG mill (the 4.0-litre twin-turbo V8, producing 375 kW of power and 685 Nm of torque) – a unit that, ironically, makes all the right Aston noises and is reliable and relatively efficient to boot. The rest of the car is satisfyingly old-school: rear-wheel drive and an eight-speed gearbox and an interior identifiable as such, rather than a tech geek’s gaming den.

BMW
The BMW motorworks crew had a busy 2019, birthing the 8- and 3-Series as well as the Z4, a coupé star that hopes to carry the manufacturer into the new digital age. Certainly the latest interiors are head and shoulders above their predecessors, a carefully thought-out mix of digital nous and ergonomic simplicity. New for 2020 is the company’s most ballistic of missiles, the M8 convertible, to the brand what Concorde was to BAC – supersonic, aspirational and ever so slightly bonkers. Mad? In the age of nanny hybrids it’s lovely (and increasingly rare) to see a hairy-chested V8 under an origami bonnet. This one is of course the twin-turbo 4.4-litre, good for a sub four-second 0–100 km/h time, even with all that heavy additional bracing underneath. The Competition version will be even quicker, which begs the question; why bother with the ‘standard’ M8 at all? Good question. Answers on a postcard to Midrand.

Porsche
All the chatter this year will be about the electric Taycan and its insane acceleration (yes, we can confirm it will give you whiplash). Yet Porsche’s topless family is just as alluring. The ever so beautiful 718 Spyder, the latest 911 Carrera and a little piece of heaven called Speedster are the star performers. That 718 Spyder is essentially a Boxster in drag, with – what have we here? – a naturally aspirated 6-cylinder boxer engine that will gladden traditionalists’ hearts. It’s fast, hard and, for purists, both gearbox and soft top are manual, intended to delight the aficionados even as it sets itself apart from the EU-complying mainstream. And what drag; along with the 911 Speedster, it harks back to a golden period in Porsche design when freedom was a drug marked topless. There’s more retro charm higher up the evolutionary ladder in the shape of the 911 Speedster, Porsche’s swansong for its much-loved 991.2 generation of cars.

The design’s obvious reference is the bulbous 356 Speedster of the 1950s, an icon that made Porsche’s name. It’s all about the lineage and in fact you can specify a factory-ready Heritage Design package (Gumball stickers on the doors, black and cognac interior and gold lettering). There are, however, modern bits, happily. The final 911 Speedster is heaps faster, essentially a 911 R with no roof, 4.0-litres of flat-six guts and glory propelling the collector’s item to more than 300km/h, easy as pie. There’s a catch; only a handful will be made and chances are if you don’t ‘know a guy’, you’re going to be paying well over the asking price (don’t ask) for the privilege. Far more sensible for everyday glory is the latest 911 Carrera, with its twin-turbocharged 3.0-litre flat-six and lovely new 8-speed PDK box. It used to be that if you chose the all-wheel drive version (called ‘4’ in Porsche-speak), you got a wider car. Not any more. Rear-wheel and all-wheel drive cars now share the same bodywork, so it’s going to be ever harder to tell them apart. For the rest, Carrera boasts all the latest Porsche 911 family additions: a squarer front, that much-discussed full-width rear light treatment, the all-new, less-is-more digital interior and the standard Porsche Active Suspension Management electronic dampers, arguably the best of their kind in the business. It’s a sports-car for the new age, certainly, but then 911 has always been a usable everyday speedster, so here’s to more of the same, refined. 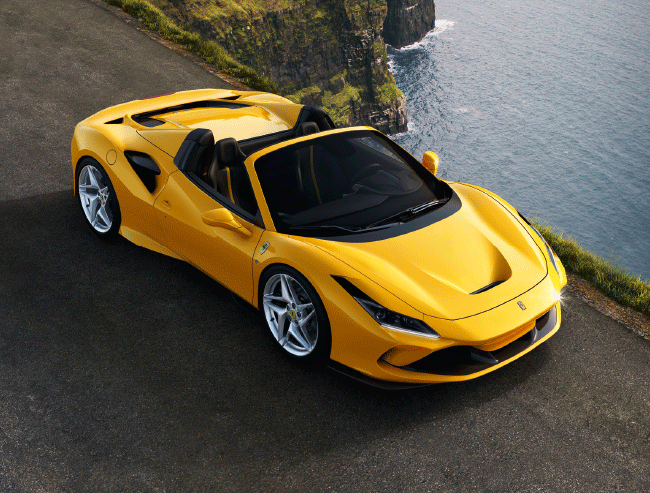 Ferrari
Beauty might be in the eye of the beholder, but few would argue that Ferrari’s latest work of art, the F8 Spider, represents some of the best design work to come out of Flavio Manzoni’s Maranello studio in years. There’s something distinctly 1970s about the purity of the curves (did someone say 308 GTB?), echoes of Leonardo Fioravanti’s work for Pininfarina in what many regard as Ferrari’s design golden age. Under the seductive curves, however, is a very modern Ferrari, with the company’s latest twin-turbo V8 4.0-litre behind the driver and a whole host of aids aimed at keeping the frisky Italian on the road, whoever is driving, even erratically. Inside it’s still traditional Ferrari (deep cowls, deep seats, a central tachometer) but, horror of horrors, there’s the option of an infotainment screen that will be tacked onto the dash in front of the passenger. Not a wonderful idea but alas, a sign of the times. Get up and go is predictably swift – expect to see 300 km/h from the 530 kW mill in a blur. In fact the slowest thing about the F8 is the roof, which at 14 seconds means theoretically you could have managed 200 km/h and stopped again before it had fully deployed. It won’t, of course – the hard top refuses to emerge at anything above 40km/h.

Lexus
Continuing the ongoing Lexus trend of design bravery, the LC500 Convertible ventures where others fear to tread. Granted, that enormous spindle grill up front divides opinion but, for the rest, the Japanese maker has to be applauded for its radical origami approach. Certainly you’re not going to be mistaken for anything else. Yacht-like in its colour choices and detailing, the big two-door coupé won’t look out of place among the jet set, blending in nicely with the Germans and the Brits down at the water’s edge. Not that it’s cheaper because it is Japanese – don’t expect much change from R2 million. For all that money you get a degree of exclusivity (only 100 units are being offered), a beefy 5-litre V8 engine coupled to a 10-speed automatic transmission and a bespoke interior that accents minute detailing and handcrafted finishes. And the drive? Ditch your prejudices – this isn’t a boulevard loiterer. The 351 kW is channel-led seamlessly to the rear wheels and much fun can be had. Big? Yes. Bloated? No. There’s something tremendously addictive about its muscle car attitude. And yes, that includes power slides, big smiles and a degree of yahoo. 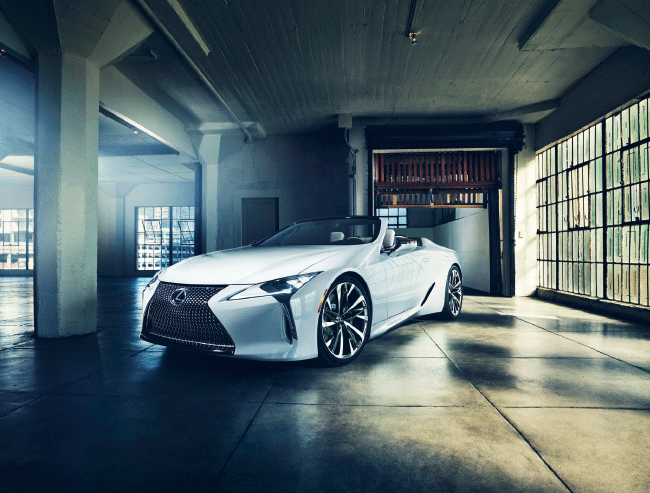 Audi
After a busy (and stellar) 2019, Audi’s plans are less heroic this year, facelifts of the A5 and R8 ranges due and a quietening down of the A3, ahead of the all-new car in 2021. The updates will include cosmetic and electronic changes to the A5 cabriolet as well as the flagship R8 Spyder, which also sees upgrades to the engineering: the 5.2-litre 10-cylinder gets a power hike for both its variants, the topless wonder now capable of well in excess of 329 km/h. Suspension and steering systems have been tweaked to offer more feel and better stability, and brakes have also been upgraded to cope with the increase in power.