Chief among the seismic shifts in motoring over the past five years has been the fracturing of traditional segments such as sedans, hatchbacks and 4x4s. Nothing new there, but few expected to see innovation in one of the most traditional segments – the convertible market. Especially as data from insight analysts Information Handling Services (IHS) Markit in 2016 revealed that convertibles, along with the traditional hatchback and sedan, were the main victims of the niche explosion.

The analysis showed that a combination of Chinese tastes (they don’t love convertibles much), post-financial crisis hangover, the abandonment of the segment by mass-volume players and climate change devastated convertible sales, which peaked in 2004 and plummeted some 60% in the following 13 years. Those dates and figures hint at something else too – the convertible has always been a bellwether for wider sentiment, mirroring the global zeitgeist, and post-2008 it’s been all about caution, if not outright fear.

Good news then that, against this backdrop, sales in Europe and the US – traditionally the leading convertible markets – saw a rise in the third quarter of 2017, hinting at a new optimism. Thank technology too. Contemporary convertibles are light years ahead of their cousins of just 10 years ago, with advances in roof technology, materials and rigidity engineering making them almost as practical as their tin-top brethren. But back to the innovation discussion. Or disruption might be a better word, at least in the case of the Range Rover Evoque Convertible. The car is the only truly new convertible of the past 20 years, insomuch that it doesn’t reference anything else, competes in a brand new niche of its own making and represents genuine, out-of-the-box thinking.

The idea goes like this… We choose 4x4s and SUVs to get away from the rat race, and yet when we get out there, we’re still stuck in a metal box, alienated from the great outdoors. Land Rover thought it would be a great idea to offer a degree of fresh-air freedom to those unlikely urban off-roaders who choose the Evoque as their chariot of choice. In a nutshell, go hiking in your car. But slackpacking. No ick. Very millennial, very clever. And actually it’s a bit genius – hit the dirt or the hidden B-road, reduce speed, release the hood and bingo – bird calls and fynbos smells, without worrying if your sports car cabriolet is going to blow a tyre or tortoise on a middelmannetjie. 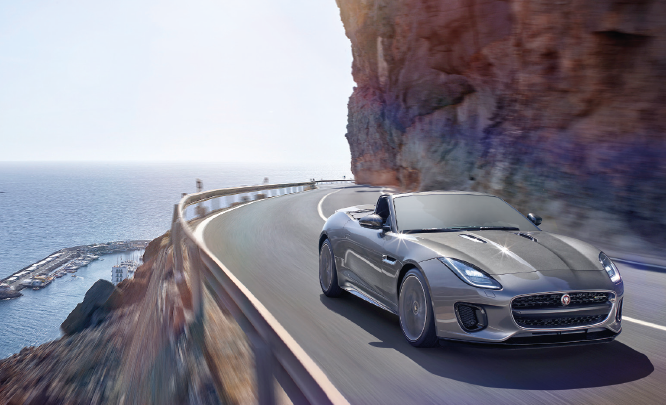 There are only two drawbacks, at least for the upwardly mobile target market: getting dust and grit on your bespoke caramel interior and the perceived security issue – a serious concern for this particular crowd (the Evoque’s roof is reinforced cloth, not metal).

As IHS Markit noted in their research, the financial crash of 2008 more or less wiped out mass-volume convertibles, such as the affordable Golfs, Opels and Peugeots. Buyers in these markets took fright, choosing instead the motoring equivalent of a low-risk investment in the shape of a bulletproof resale value ‘everydrive’ such as the VW Polo. The segment morphed quickly into a high-end, second or third car sector, accenting the enviable and the covetable, rather than the quirky and the kooky.

The SA market epitomises this trend – the best in breed now comes from the luxury brands, with just three notable exceptions (the Mini Convertible, Mazda MX-5 and the Ford Mustang).

Audi, smallest of the mainstream luxury brands, has been unusually busy of late, bringing to market new versions of their fleet. The niche luxury car maker fights well above its weight class, targeting a particular ethos of contemporary cool that has found much traction in SA.

According to Trevor Hill, head of Audi South Africa, theirs is currently the youngest portfolio of vehicles available, locally. The new A5, A3 and R8 as well as the Q2 will soon be joined by the A7 Sportback and new A8 sedan and the all-new Q8. In addition, expect the introduction of the face-lifted Audi TT and a clutch of Audi Sport specials, including the RS5 Sportback and R8 Spyder V10 Plus. If ours is a market that loves a convertible, Audi is best placed with fashionable stock – the A3, S5 and R8 all offer sharp, new topless versions sporting the company’s adaptable digital interface – the much-loved virtual cockpit.

Comparatively speaking, Mercedes-Benz and BMW have been quieter. Both marques spent much of 2015/16/17 refreshing their line-ups, Mercedes particularly, realigning their brand to appeal to a younger, more contemporary market. The primary weapon in their arsenal has been the roll out of AMG products – the performance wing of the company – now wholly integrated and making its presence felt at every turn. It has been used to upscale the ancient SLK, now repackaged as a SLC, with the sole survivor, the AMG SLC43 getting the company’s new V6 engine and an eye-watering price tag of close to R1 million. Competing as it does with the cheaper, new four-cylinder Porsche 718 Boxster S, it has its work cut out for it.

A much better call has been transforming the sybaritic Mercedes-Benz S-Class into the company’s de facto hairy chest flag bearer, the new S63 AMG S cabriolet – a monster of a car, complete with fire-breathing V8 engine and widescreen, all-digital cockpit care of the latest E-Class. Merc was justifiably concerned about the recent launch of the latest Bentley Continental, and this is their answer. In AMG guise, their cabriolet plays the dual Jekyll and Hyde roles of comforter and killer, thanks to intelligent adaptive suspension and smart steering that intuits the needs of the driver and the terrain ahead. 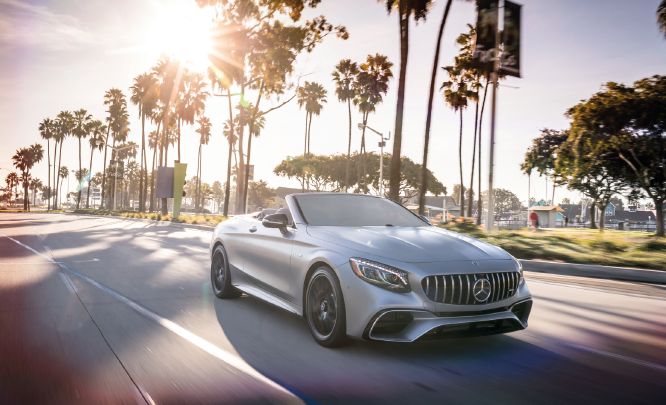 The S63 AMG joins its ‘baby’ sisters, the C63 and E63 AMG cabriolets in the stalls. Mercedes has complicated market differentiators for the trio’s customers, but a common trait will be a love of disrupting neighbourhood equanimity – each sounds like Armageddon with the ‘exhaust loud’ button engaged.

BMW’s game plan –  oft criticised these past few years – suggests a less glamorous though sports-orientated path into the future. As with Mercedes and AMG, BMW is pushing its ‘M’ moniker, adding it to the mainstream fleet in an effort to score kudos as much as kilowatts. In the recent BMW M4 convertible, that kudos comes in the form of three very traditional litres of silky smooth M-power (albeit with a big turbocharger).

BMW has been making sublime in-line six-cylinder engines for more than 70 years, and it’s a relief to see the downscaling fairy has yet to scatter her dust here. It’s less a traditional M – in the way of the M3 and M5 – than a warmer 440i M (the placement of the M is all-important, before the number is optimal, after it a sign that the marketing boys have had their way). Other recent Ms include the M240i convertible, also a 3l car, and the grand daddy master-blaster M6 convertible, hiding the company’s 4.4l eight-cylinder plant under a tightly stretched new skin that suggests grievous bodily harm and more aggro for BMW drivers in traffic.

If there has been a downside to the elites running the convertible show, it’s that a degree of distinctiveness has been lost. Enter this pair of unlikely brothers – Ford’s throwback Mustang convertible and Jaguar’s ‘baby’ F-Type 400 Convertible 2.0l. Brothers, because both elicit the same sort of wide-eyed glee from onlookers that pricier machinery can only hope for. The secret is in their heritage. Both are generational successors to a long line of class acts, sporting family design cues that spark personal resonances. Everyone wanted to be that wanderer crossing the US in a drop-top Ford, or has lusted after a classic, open-top Jag. 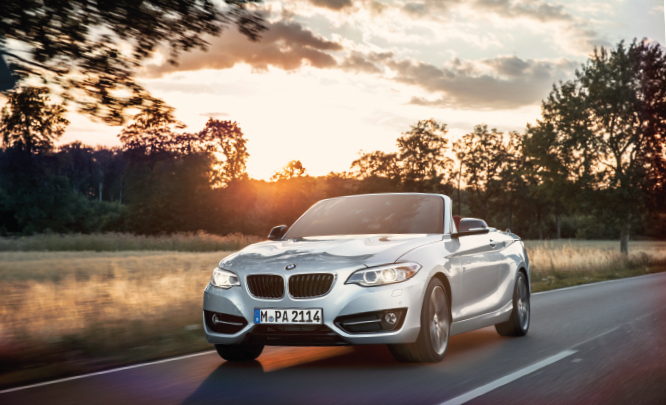 To their credit, both F-Type and Mustang retain something of those elemental dreams – the Ford is basic and gruff enough to recall the blue-collar days of miracle and wonder. And the Jaguar, even in new, four-cylinder guise makes the kind of noise that puts posters on walls. And both look the part, the Pony as elegant a muscle car as Detroit has ever made, especially in cabriolet form, and the 400 a genius amalgamation of style and substance, channelling E-Type, as well as contemporary Brit designs trending in current Aston Martins, Bentleys and McLarens.

The cabriolet market’s shift into exclusivity brings with it sales challenges for manufacturers and disappointment for average buyers (even the evergreen Mazda MX-5 is now R540 000). Yet the idea of open-air travel remains a solid dream, and for those able to pay the price, the market has never offered such a sweep of covetable, reliable, rousing machinery. A good time to be collecting dreams.