Tricky though 2020 was, it offered myriad opportunities for those agile and quick enough to take advantage of the chaos. So it was in the motoring sector, with new ways of selling cars a characteristic of many forward-thinking manufacturers. The much-vaunted idea of pushing showrooms online finally happened; Mercedes, BMW, Audi and Ford led the way in creating digital turnkey sales operations. Crucial to the success of that push was understanding precisely what was selling well and what wasn’t. The plethora of SUV models currently being sold – and launched – speaks to that deep dive. The market has made up its mind: big, small, on- or off-road … customers want SUVs above all other offerings for their perceived strength, safety and added value. The battle has been won. Given that victory, many manufacturers are now aggressively looking at inventive ways to subdivide the lucrative SUV market, carving up their own model ranges and populating niches that buyers didn’t even know existed a few years ago (they didn’t). Cue the micro SUV, led by the all-conquering Suzuki S-Presso; the performance SUV; even the limousine SUV (Rolls Royce’s Cullinan did brisk business during 2020).

AUDI
In this climate it was inevitable that Audi would follow fellow Germans Mercedes and BMW down the sportback or coupé SUV path. Next year’s big hope will be the success of the Q3 and Q5 Sportback variants. They join the Q8 on the showroom floor, offering a neat marketing trick – SUV but not SUV, a high, partly capable dirt-roader but with a sleeker, more sports-focused silhouette. The coupé SUVs, say the marketing folk, suggest a driver that values both heft and style. Audi, like Mercedes and BMW, will tell you that the coupés lose very little over their Q3, Q5 and Q7 brethren in terms of space or ability, but it’s also true that they gain very little in terms of sportiness. It’s an aesthetics game ultimately, one being fought in the style-conscious trenches of upwardly mobile Green Point and Pimville. Inside, all three variants feature pinched tech and ideas from sister brand Porsche, a good thing mostly; an airliner’s worth of screens greet the new Audi owner, with the marque’s third generation virtual cockpit (configurable digital dials and screens) again the hero take-out. Driving the new Q3 Sportback is entirely similar to the standard Q3, despite the marketing hype. Again, that’s no bad thing – Audi’s much  copied, rarely mastered combination of silk and steel is magnificent and, happily, on show here. The Q5 Sportback should be the same when it arrives, fist in a velvet glove the overarching ethos. Against the Sportback backdrop, suddenly Audi’s once cutting-edge Q7, recently relaunched with updated infotainment connectivity, four-wheel steering and a subtly sharper look, seems leaden in comparison. Until it’s driven. Then the wisdom of a full-sized SUV is apparent, especially in Audi’s grand beast, which errs on the side of comfort, rather than sport. There’s acres of space, no compromised rear sight lines and a certain airiness that’s missing in the new tribe of sportback SUVs.

MERCEDES-BENZ
Just like Audi, Mercedes was late to the sports SUV market with its GLC Coupé, though as an SUV brand it is the overachiever. In a splashy reveal, the marque flooded the market with no fewer than eight new or updated SUVs. The smallest, the GLA reflected a new simplicity for Stuttgart (did someone say Audi?), while the big boys, the leviathan Mercedes-Maybach GLS 600 and ageless G-Class, represent the limitless aspirations of both maker and client. Of particular interest was the re-emergence of the diesel engine, until recently banished in the aftermath of VW’s Dieselgate. Mercedes’ sublime 3.0-litre, 6-cylinder 400d turbodiesel engine offers 243 kW and 700 Nm of torque and is well suited to SUV work. In the G-Class and the GLC Coupé, it makes perfect sense; bags of go, epic for the long road, efficient and – as long as it’s new – relatively clean for a fossil-fueller. Diesel, however, has its detractors, and for the non-believers, Mercedes has a smorgasbord of petrol scorchers on the menu. Happy news for 2021 is the inclusion of the AMG twin-turbocharged 4.0-litre V8 engine in the GLC 63S and GLE Coupé 63S as well as the GLS 63S. That means 450 kW and 850 Nm, good for a 0-100 km/h time of 3.8 seconds in the smaller GLE.

Yet for all that testosterone, it was the introduction of the long-awaited GLB that garnered the most attention. GLB used to be GLK in overseas markets (it never reached SA shores), a boxy, no-nonsense, much-loved, sit-up-and-beg load carrier. Out of the GLK chrysalis came a much curvier, smaller and lower iteration, instantly identifiable as a contemporary Mercedes, rather than the quirky cousin. It’s cavernous inside, will be hugely efficient in 2-litre diesel guise and should do well on the school and antiques runs. 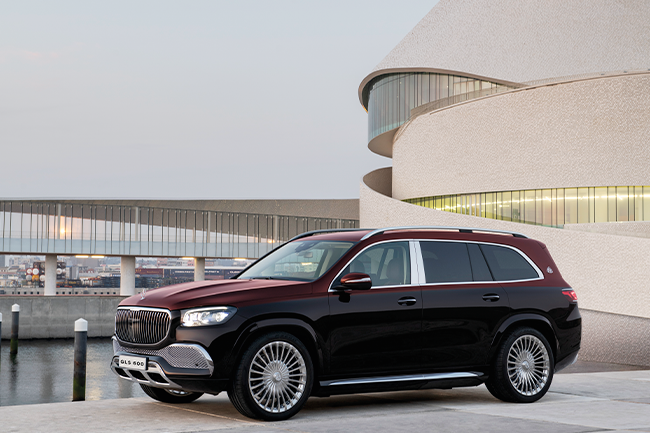 THE SPORTS STARS
The other meteoric-growth SUV segment is the performance niche. For academic reference, performance means ridiculously fast, as opposed to ordinary fast for the sports specimens. The current champions are the Bentley Bentayga, Porsche’s Cayenne Turbo, the Range Rover Sport SVR, Audi’s RS Q8 and Lamborghini’s mad, bad, entirely beautiful Urus. Freshly gloved for the fight are BMW’s X5 M Competition and Jaguar’s F-Pace SVR, both with fanatical followers. The BMW, which benefits from a mild facelift this year, gets the full Motorsport treatment, meaning the fire-breather biturbo 4.4-litre V8 so beloved of the race jockeys and a dizzying range of drive modes and selectable chassis controls. The end result is a crazy happy 3.8 second sprint to 100 km/h and enough low-down grunt to ensure effortless around-town ambling when the claws are retracted. Turbo lag? Nothing to see here. Jaguar’s approach is slightly different, though there’s also a V8 involved, this time a supercharged work of art. Traditionally that means better low-down response than a turbocharged unit, but with the penalty of a hike in fuel economy. Jaguar is at pains to refute the latter, suggesting its tech wizards have managed to achieve 12 litres/100 km, overall. Whatever, the 405 kW 5.0-litre V8 is a thing of real beauty, as nice to listen to and look at as to experience on the track. The Special Vehicle Racing F-Pace has had an interior upgrade as well, with new screens featured, as well as upgraded seats and improved materials, including aluminium and Alcatara suede accents in and around the dashboard. The steering wheel is new, as is the electric system governing its work. And the de rigueur 0–100 km/h time? Four seconds in Dynamic mode, says Jaguar, good enough (just) to see off the nemesis Porsche Cayenne Turbo. 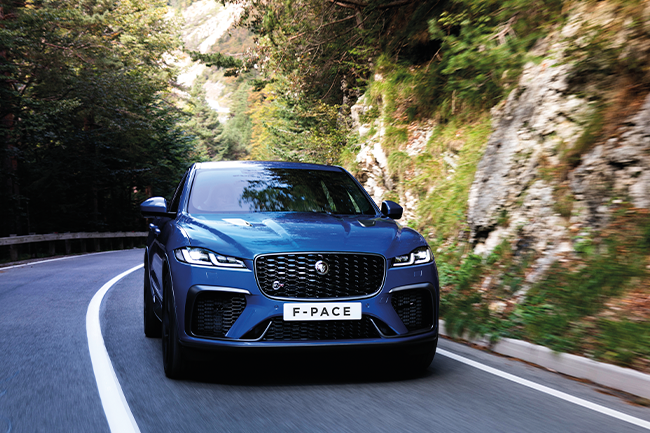 LAND ROVER
For many who can afford it, which SUV to buy is a question easily answered, or so suggests the sales success of Land Rover’s latest Defender. Starting at more than R1 million, it is most definitely not the Defender of old, but then the new Defender is about as agricultural as a hipster in Googleplex’s Mountain View chill lounge. It is easy though, tech aside, a masterful fusion of ability and flair. It’s a car that grows on you as the kilometres pile up, whether travelled on tar or through deepest mud. Engine options are interesting – a 2-litre turbodiesel that seems the business but is prone to turbo lag, and the V6 turbo-petrol, which uses more fuel but makes for smoother, more elegant progress. Hang on to your R1.6 million and the bigger straight-six turbo-diesel could be yours mid year, a seemingly sensible compromise. Whatever the choice, the interior experience is the same – quiet, accomplished, comfortable; three descriptives you cannot use for the old Defender. Chief asset is the air suspension, which is set up ostensibly for dirt-road work. That means an excellent ride over corrugations, ruts and rocky terrain. Faster cornering is conversely less adept – Defender is high, and the laws of physics come into play, active suspension or not. Still, compared to the old car, which was the embodiment of Newton’s Third Law of Motion, it’s a Lamborghini Huracán in the twisties. 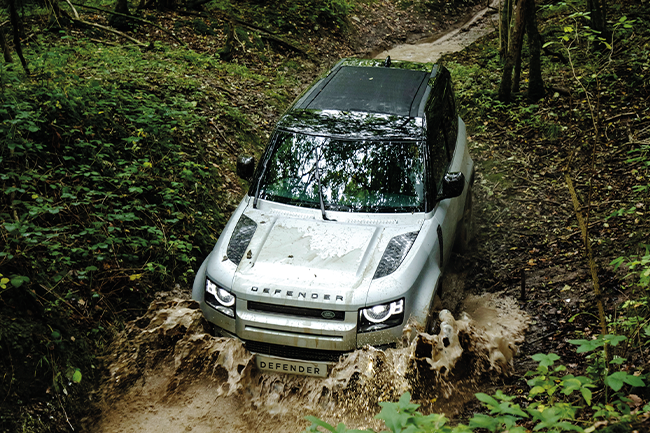 The SUV revolution continues to evolve, led ironically by the original; you just have to drive both Defenders to see how far the segment has come. And while most of the dynamism is in the small SUV market, the aspirational end is now a properly accomplished place – with increasingly independent suspensions winning out over ladder chassis, and fully electronic drive systems the order of the day. It’s little wonder that South Africans are choosing SUVs in record numbers – the old compromises are gone. Ability, economy, comfort, even performance is now on the table. Welcome to the world of SUV dominance.