It’s not unlikely that the meat inside a chicken burger from your favourite fast-food restaurant is Brazilian, born and bred. As Paul Matthew, CEO of South Africa’s Association of Meat Importers and Exporters (AMIE), told Farmer’s Weekly, broiler-meat imports into SA doubled between 2010 and 2018 due to local production being unable to keep up with national demand. Imports of poultry in 2018 accounted for 11% to 16% of total national supply, of which 61% (348 155 tons) came from Brazil, according to SARS figures.

SARS-verified statistics provided by the South African Poultry Association show that poultry imports from Brazil totalled 19 219 tons in January 2019, representing 54.6% of total poultry imports, with an FOB import value of R186.8 million. On a monthly basis, imports from Brazil decreased by 11.2% and showed a 29.2% drop compared to January 2018. It paints a general picture of trade relations between the two southern hemisphere nations.

SA’s trade with Brazil has been dominated primarily by commodity imports from the South American country, a trade deficit the SA government has been attempting to restrain. Speaking at the Latin American Defence and Security exhibition in Brazil in 2019, Shanaaz Ebrahim, SA’s foreign economic representative in Brazil, explained that the preferential trade agreement between the Southern African Customs Unions (SACU) and the Southern Common Market (Mercosur) trade blocs had, to some extent, reduced the deficit between the two countries. The Mercosur member states consist of Argentina, Brazil, Paraguay and Uruguay. 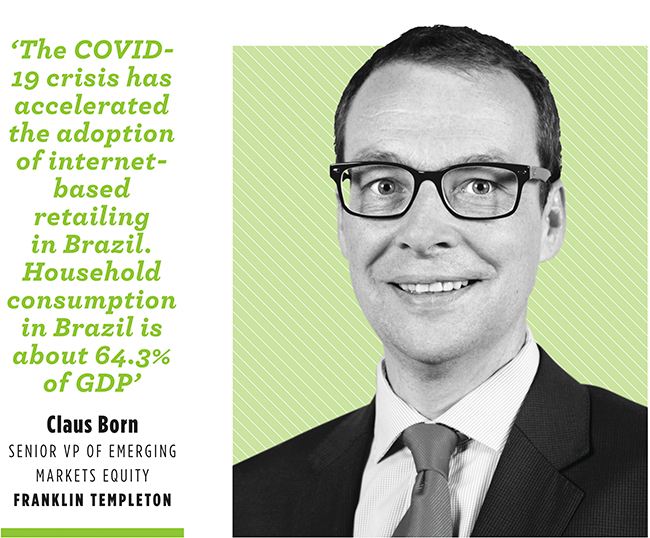 Trade tariffs on poultry exports to SA were also increased last year. Duties on frozen bone-in chicken pieces were raised to 62% from 37% for imports from all nations, excluding the EU and SADC members. Levies for frozen boneless chicken cuts increased to 42% from 12%, which ruffled some feathers, especially among US decision-makers. Despite the communications from various corners of government, we shouldn’t be relying on our inclusion in BRICS as the catalyst for balanced trade between Brazil and SA, says Martyn Davies, MD of emerging markets and Africa at Deloitte. The one subject BRICS has not spoken about is the one-sided trade issues with SA. ‘We haven’t seen a liberalised trade  bloc. Has any South African company gained market access into Brazil due to preferential treatment because of our inclusion in BRICS?’ asks Davies. ‘It’s a provocative question.’

As Ruchir Sharma, head of emerging markets and global macro at Morgan Stanley Investment Management, is quoted in BRIC Beyond the Collective, a report by the Gordon Institute of Business Science, ‘lumping [countries] into faceless packs with catchy but mindless acronyms … straight-line extrapolations [and single-factor theories] are almost always wrong’. But what about IBSA, another collective including India, Brazil and SA, which was established in 2003? The group promised to align the globe’s largest developing-country democracies to trade with one another, among other aims. It also seemed a novel idea but results are based on what could be, rather than actual deliverables.

‘The three countries can diversify their trade away from industrial countries by trading more with each other,’ writes William Gumede, associate professor at Wits University’s School of Governance, in issue 4 of the BRICS Academic Review. ‘IBSA countries could create a complementary market between them.’ This market, says Gumede, would be based on one country selling to another what that country needs, and vice versa. Instead of relying on industrial nations, the IBSA nations should import from each other. Each country can become part of the value chains of the other’s manufacturing and services production chains. Ideally, India and SA can source competitive agricultural products and ethanol, construction materials and vehicle parts from Brazil, while Brazil and SA can source competitive pharmaceuticals and IT-enabled services from India.

‘Similarly, Brazil and India, in turn, can source competitively certain minerals and metals from South Africa,’ he says. IBSA, apart from the IBSA Fund, which aims to alleviate poverty and hunger, remains mainly hypothetical. Looking at foreign direct investment opportunities, Brazil, following the same trend as other developing nations, is experiencing somewhat of a boom in the technology sphere, with venture capital funding of $1.3 billion flowing into start-ups – a 40% compound annual growth from 2013 to 2020. According to the McKinsey Brazil Opportunity Tree 2020 report, this can be attributed to the high level of digital utilisation in the country. Internet penetration in Brazil stands at 70%, compared to SA’s 54%, and 41% in India. Brazilians spend roughly nine hours a day online, among the highest in the world; US citizens by comparison spend about six hours a day online.

‘E-commerce is an exciting investment theme, with several large players competing in the online space,’ says Claus Born, senior VP and institutional portfolio manager of emerging markets equity at Franklin Templeton. ‘As in other countries, the COVID-19 crisis has accelerated the adoption of internet-based retailing in Brazil. Household consumption in Brazil is about 64.3% of gross domestic product, so the consumer sector in general is strong, vital and offers a variety of interesting investment opportunities.’ The Brazil Opportunity Tree report quotes several Brazilian businesspeople about their prospects for the years ahead. While perhaps erring on the side of biased optimism, local business leaders are positive that the current climate will result in foreign investment. The combination of growth acceleration and low interest rates in the country should pique global investor interests in 2020, says Roberto Setubal, co-chairman of the board of directors at Itaú Unibanco. Andre Dorf, CEO of Arteris SA, a company providing highway maintenance support services, says the huge shortage of infrastructure in the country provides ample investment opportunities for investors looking at the long term. 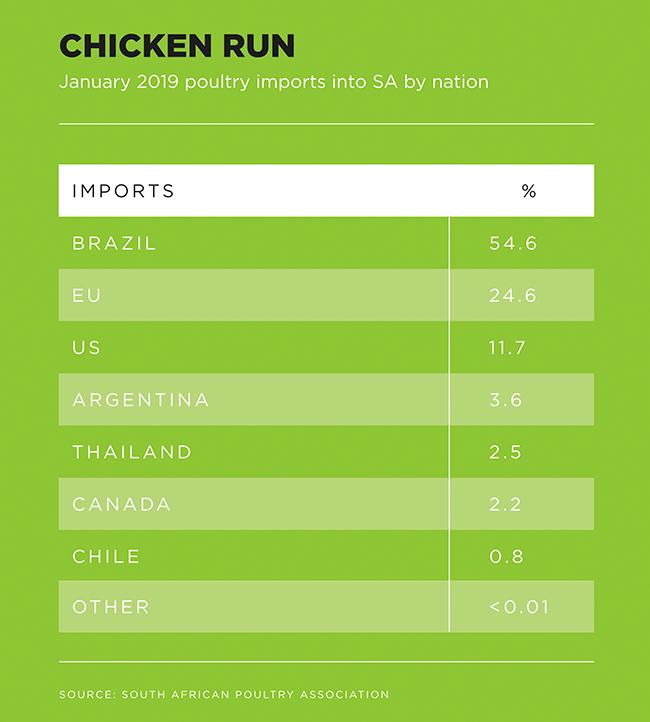 The Organisation for Economic Co-operation and Development (OECD) has pegged Brazil’s growth rate at 2.6% in 2021 and 2.2% in 2022, and economic activity is still expected to fall short of pre-pandemic levels by the end of 2022. ‘Inflation will remain below target and high liquidity provision, including record-low interest rates, will support investment,’ it says. The OECD does, however, add that a failure to continue structural reform could impede investment and future growth. It expects SA’s GDP to increase by 3.1% in 2021 and 2.5% the next year, not far off from the outlook for Brazil.

The mining sector in Brazil has proven successful for Anglo American, whose presence in the country dates back to the 1970s. The company has continued its operations, notably at the Boa Vista Fresh Rock mine and the phosphates mine in the town of Ouvidor, which, says Anglo, will continue to deliver phosphates for the next 40 years. Anglo is now the second-largest integrated phosphate fertiliser producer in Brazil, producing nearly 6 million tons of ore per annum.

Tourism remains a moot topic as a second wave of the coronavirus develops across the world, again postponing the opening of borders, but it is noteworthy that arrivals from Brazil in September 2019 saw an 11.9% increase compared to September 2018, according to Stats SA’s Tourism and Migration Statistics report. A comparison of movements in the 10 countries with the most visitors to SA between March 2018 and March 2019 shows that the number of tourists increased for six of the 10 leading countries, including Brazil, China, the Netherlands, US, India and Canada, and decreased for the other four, Germany, Australia, the UK and France. Of these nations, Brazil showed the largest increase of 19.8%, from 5 363 tourists in March 2018 to 6 423 in March 2019. At the moment, Brazil remains on SA’s high-risk list, and leisure travellers are not permitted, with the only exceptions for those with high-skills visas, diplomats, sports people and investors.

At the 2020 BRICS Summit, which took place virtually, the leaders jointly agreed on the importance of ‘information exchange’ about the nationally adopted measures, as well as short-term and mid-term stimulus packages, to mitigate the consequences of the current crisis.

They also reaffirmed their commitment to a strong, quota-based and adequately resourced IMF at the centre of the global financial safety net. ‘We acknowledge the crucial role of international trade in economic recovery and remain fully committed to a transparent, open, inclusive, non-discriminatory and rules-based multilateral trading system, as embodied in the World Trade Organisation,’ the BRICS declaration reads. ‘It is critical that all WTO members avoid unilateral and protectionist measures that run counter to the spirit and rules of the WTO.’