Namibia’s solid financial system, stable political environment, and well-developed infrastructure (its road network is considered the best in Africa) are among the attributes that provide opportunities for foreign investors, according to Deloitte’s Invest in Namibia report. The Foreign Investment Act of 1993 (FIA) guarantees equal treatment to foreign investors and Namibian firms, and includes incentives and services, such as investment and tax benefits for the manufacturing sector. ‘The government is cognisant that some of its bureaucratic processes, such as the time it takes to get a business visa, impede the ease of doing business and is working to address outstanding challenges,’ as noted in the 2020 Investment Climate Statements: Namibia, report released by the US Department of State. The Namibian Investment Promotion Act, set to replace the FIA, has been under review since 2016.

The Namibian government provides preferential incentives to manufacturing, particularly those that add value to local commodities, reports the Namibia Trade Directory. ‘Physical trade in the region is managed by the Walvis Bay Corridor Group, which oversees transport corridors to SADC markets,’ it continues. ‘A wide range of trade agreements has been signed with blocs, and nations of the African continent. Chief among these are AGOA [the African Growth and Opportunity Act] with the US, the EU-EPA [Economic Partnership Agreement], and the Cotonou Agreement between the EU and ACP [African, Caribbean and Pacific] states.’ Namibia is a member of key economic and trade communities, international tax treaties, and trade agreements, notably the Southern African Customs Union (SACU) and SADC, according to Tuyeni Akwenye, investment analyst at Allan Gray.

Due to the country’s historical ties with SA, many large SA companies, especially in financial services and mining, have been operating in Namibia for decades. ‘There are a few JSE-listed corporates that have a dual-listing on the Namibian Stock Exchange [NSX],’ says Akwenye. ‘And while fewer   Namibian companies operate in South Africa, some do have a presence in SA,’ he says. ‘Namibia Breweries, for example, has a 25% shareholding in Heineken SA, and is listed on the NSX.’ Each of the big four banks in SA also operates in Namibia, along with large insurers including Hollard and Old Mutual.

Bidvest Namibia, another SA powerhouse operating in Namibia, is involved in businesses ranging from freight and logistics, services, products, food and distribution, motor retail, trading and other commercial sectors. Other notable dual listings on the JSE and NSX include Momentum Metropolitan, FirstRand and Anglo American. Additional active areas of investment include the mining, fishing, oil, and banking industries, as noted in the US Department of State report. 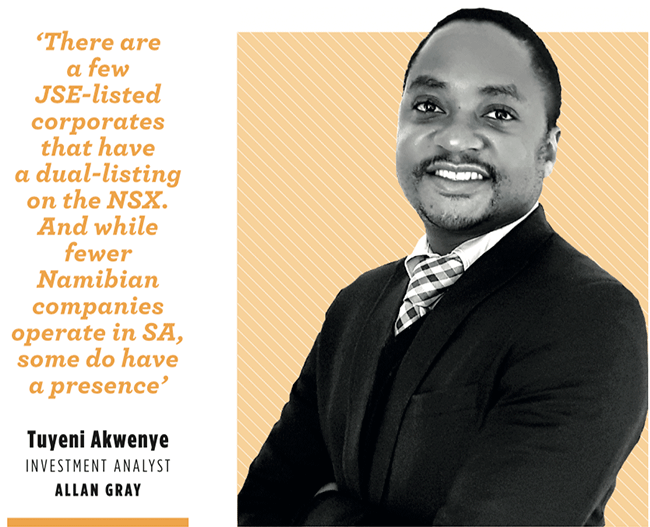 The government is currently emphasising its green-energy prospects, and it is a sector to watch, especially given that sustainability remains a major global theme, says Akwenye. Namibia imports more than half of its electricity from neighbouring countries – SA, Zimbabwe, and the Southern African Power Pool, according to the Renewable Energy and Energy Efficiency Partnership (REEP). ‘Electricity is mainly derived from fossil fuels and all petroleum products are imported,’ the REEP states, rendering supply to the grid vulnerable. To address this, the Namibian government has set out to roll out renewable energy in its Namibia Energy Regulatory Framework, Renewable Energy Act, and overall Energy Efficiency Act.

‘This will assist the energy stakeholders in Namibia in creating a comprehensive new energy regulation framework for the country, which takes into account the promotion of renewables and energy efficiency, and facilitates fair market access, return on investment, quality of supply, standards, market support structures and incentives.’

The success of these frameworks has been limited. Not all envisaged outcomes were achieved, notes the REEP. However, the outputs that were produced were of good quality and highly relevant to the project purpose. The main success was the creation of a national policymaking process that contributed to the development of a regulatory framework for renewable energy.

Namibia has the natural means to generate significant energy from renewable sources, according to the US International Trade Association (ITA). The government, along with its power utility NamPower, has expressed interest in renewable solutions. The InnoSun solar plant, built in 2015, generates up to 1% of the country’s electricity, and was the first local independent power producer that Nampower signed a power purchasing agreement with. Efforts to establish larger renewable capabilities are ongoing, says the ITA. ‘While there has been foreign interest in the renewable-energy sector, the rigidity of the government’s pricing policies makes many projects unprofitable in the short term.’ Nampower and the Energy Control Board are looking at using feed-in tariffs or a tender process to add more renewable capacity.

Chinese investments have flooded into the uranium-mining sector, the Investment Climate Statements report states, while SA continues to be invested heavily in the diamond mining industry. Foreign investors have also shown interest in oil exploration off the Namibian coastline.  The investment climate in Namibia is ‘generally positive’, the the report adds. ‘Namibia has maintained political stability and continues to offer key advantages for inward foreign direct investment.’ These include a favourable macroeconomic environment, an independent judicial system, protection of property and contractual rights, good quality of physical and ICT infrastructure, and easy access to SA.

Mining has historically been the country’s ‘economic bedrock’, as noted by Namibia’s Minister of Industrialisation, Trade and SME Development Immanuel Ngatjizeko in the PwC Namibia Business and Investment Guide. Among the largest players in the Namibian mining sector is the diamond giant De Beers. 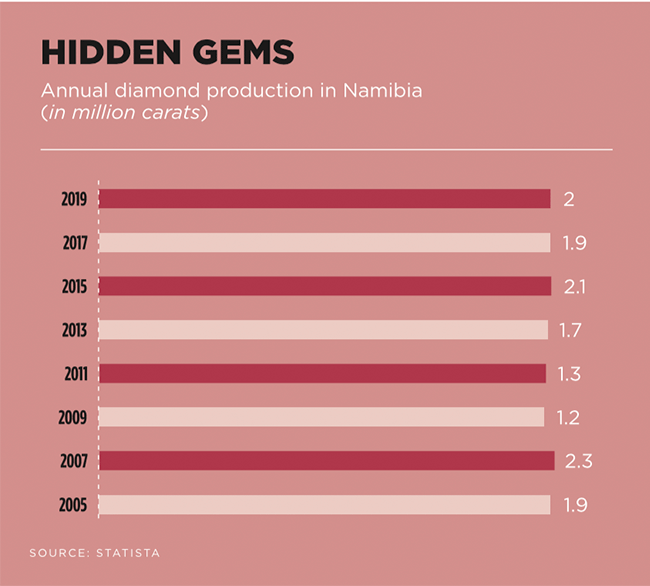 Debmarine Namibia is a joint venture between the Namibian government and the De Beers Group. In May 2019, De Beers announced the approval for the construction of the first-ever custom-built diamond-recovery vessel, at a cost of approximately $468 million. The vessel is expected to add half a million carats a year to Debmarine Namibia’s production, an increase of about 35%. ‘It is through investments like this that we can continue to develop Namibia’s economy,’ Tom Alweendo, Minister of Mines and Energy, said at the time. ‘As the government, we will continue to do what we can to promote and encourage investment in the mining sector.’ The vessel is expected to create more than 160 new jobs alongside Debmarine Namibia’s current workforce of 975.

Speaking to Mining Weekly earlier this year, Warren Beech, CEO of law firm Beech Veltman, said that Namibia’s mining sector looks set for growth for the foreseeable future, due to a renewed global focus on copper, gold, and battery minerals; the continued mining of uranium and diamonds; and the continued exploration for oil. ‘Its mineral resources, combined with its strong policy framework, are likely to ensure that Namibia continues to be a strong investment destination,’ said Beech, adding that policy continuity has also ensured an investor-friendly environment.

The pandemic has challenged global economic stability . In 2019, tourism contributed 11% to GDP, according to commodities data hub Knoema. Accurate and recent figures on the toll of COVID-19 on the Namibian tourism industry are scarce, but there’s no doubt it has taken a huge knock, along with travel destinations around the world. The World Travel and Tourism Council, in its Economic Impact report, shows that the contribution of tourism to GDP in Africa was essentially halved by the pandemic, costing some 7.2 million jobs on the continent.

Namibia has been open to international tourists, including South Africans. At the time of writing, as the third wave of infections is expected in many countries in the Southern Hemisphere, all travellers entering Namibia were required to produce a SARS COV-2 PCR negative result. Its deserts, arid coastline, salt pans and eco-rich areas in the north have always been a favourite destination for South Africans. Tourist arrivals recorded a slight increase of 2.5% from 1 557 279 in 2018 to 1 595 973 in 2019, according to the Tourist Statistical Report 2019, with SA accounting for about 17%.

The government launched a Tourism Revival initiative last June to breathe life back into the sector, following the damage wrought by the pandemic. A tourism task force was set up consisting of representatives from institutions and the business community. With such a large part of Namibia’s economy reliant on tourism, there’s no doubt that most other sectors also suffered. Post-COVID, it can only pick up from here.