More than any other sector, banking is inextricably linked to the economy of a country. In boom times, banks do well. In recessions or periods of stagnant growth, banks perform poorly. At their core, banks hold financial assets on behalf of depositors and invest these in a leveraged way, largely by issuing loans, to create wealth. This means the relationship between banks and economies is reciprocal: economies do well when banks are lending. Banks tighten lending when economic conditions are not favourable.

It is no surprise, then, that following government’s decision to implement a hard lockdown to slow the spread of COVID-19 in late March last year, banks tightened credit taps considerably. Conditions were unprecedented – this was not a financial-market crisis, such as in the 2007/08 financial crisis; this was an economic crisis where most of the economy would be shut down, with the path to normal operations for some sectors uncertain for months. This caused banks to do three things. They began lending to only their best existing customers; they assisted customers affected by lockdown by offering payment holidays and interest exemptions; and they increased their provisions for loans that would likely not be repaid. This means financial results reported by the banks during last year are not all that useful as they typically show a sharp one-off impact of the pandemic. This was not unique to SA, as many countries globally implemented lockdowns to slow the pandemic. This affected global growth, which was negative in 2020, but the rebound has been swift.

Globally, growth is expected to expand by 5% this year, according to PwC. ‘By the end of 2021, or early in 2022, we expect the global economy to revert to its pre-pandemic level of output,’ according to Rivaan Roopnarain, PwC banking and capital markets partner. However, this recovery is uneven. PwC’s base-line scenario sees the SA economy growing by 3.7% in 2021.

‘The forecast also includes continued electricity load shedding akin to the regularity experienced in 2020,’ says Roopnarain, ‘In this narrative, we expect GDP to return to the pre-pandemic level by 2023.’  ‘It is important to keep in mind that South Africa’s real gross domestic product per capita [which is adjusted for inflation] was in decline before COVID-19 and dropped by 8.3% last year. Based on our baseline economic and population growth expectations, real GDP per capita will only return to 2019 levels by 2028.’

All six of SA’s major commercial banks – Absa Group, Capitec Bank, FirstRand, Investec, Nedbank Group and Standard Bank Group – are listed on the JSE. The other bank of some scale, African Bank, was listed and is currently emerging from a turnaround, following its 2014 bailout. At some point, its current shareholders (the Reserve Bank, Public Investment Corporation and a consortium of the other banks) will exit their holdings. FirstRand is SA’s largest banking group by market cap (R309.5 billion). It describes itself as ‘a portfolio of integrated financial services businesses’. This includes retail and commercial bank FNB, investment bank RMB, asset-finance unit Wesbank, and UK specialist bank Aldermore. It also owns UK vehicle-finance outfit MotoNovo (which has been merged into Aldermore, following the acquisition of the latter), asset manager Ashburton Investments and loan business DirectAxis. Aside from the operations in the UK and in its domestic market, it also has operating subsidiaries in Namibia, Botswana, Lesotho, Eswatini, Mozambique, Zambia, Tanzania, Ghana and Guernsey.

FNB’s origins can be traced to the Eastern Province Bank, which was formed in Makhanda (Grahamstown) in 1838. It was rescued by Barclays in 1926 and traded as Barclays Bank (and later Barclays National Bank) until Barclays was forced to divest from the country in 1987. In 1998, the financial interests of Anglo American and Rand Merchant Bank Holdings were merged to form FirstRand. At that time, insurer Momentum was also part of FirstRand (as was Discovery). FirstRand unbundled its majority stake in Discovery to shareholders in 2007, and it merged Momentum with rival Metropolitan in 2010. FNB has subsequently built up a sizeable insurance business, organically, using its own licences in both the short-term and long-term (life) segments. As the group states, its ‘earnings remain significantly tilted towards South Africa and are mainly generated by FirstRand’s large lending and transactional franchises, which have resulted in deep and loyal customer bases. Increased competition is targeting these traditional banking profit pools, particularly the transactional activities, and the group remains focused on protecting this large and profitable revenue stream’. 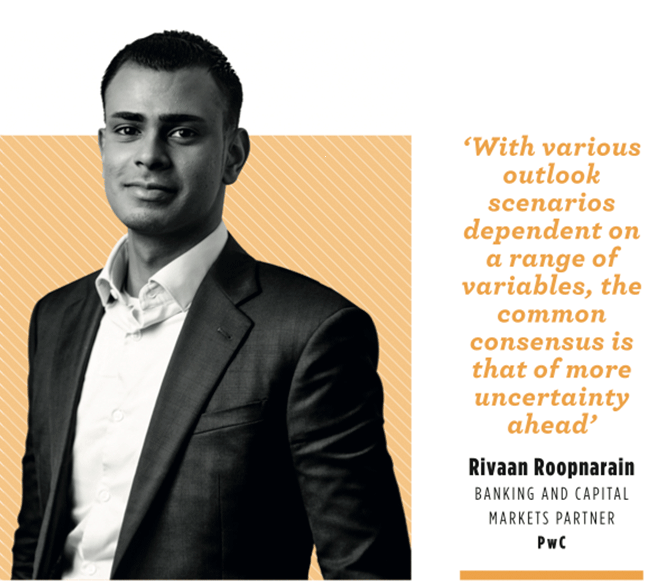 According to FirstRand, it continues to work hard to find other sources of less capital-intensive revenues, and is investing in building meaningful insurance and investment management businesses. ‘The economy continues to open up, and while the group expects origination levels to remain muted, transactional volumes are expected to trend back towards pre-pandemic levels by the fourth quarter of the financial year [April to June]’.

Standard Bank is the largest bank when measured by assets – in other words, loans – with total banking assets of R2.08 billion as at the end of 2020. Its market value stands at R207.5 billion. It was established in Gqeberha (Port Elizabeth) in 1862 as ‘the Standard Bank of British South Africa’ and, in 1886, became the first bank to open a branch on the gold fields in the Witwatersrand. In 1969, it merged with the Chartered Bank of India, Australia and China to form Standard Chartered Bank. Standard Chartered gradually reduced its holding in the SA bank until divesting in 1987.

Insurer Liberty bought the majority of the stake and was the bank’s largest shareholder for more than a decade (today, Standard Bank owns a majority stake in Liberty). In 2007, the Industrial and Commercial Bank of China acquired a 20% stake in Standard Bank for $5.5 billion. The bank had been aggressively expanding into other emerging markets, including Turkey, Argentina and Russia, but the group has steadily exited or sold down these stakes to focus on Africa, where it has operations in 20 countries.

Absa Group, with a R114.6 billion market cap, was founded in 1991 as ‘Amalgamated Banks of South Africa’ through the combination of United Bank, Allied Bank, Volkskas and Trust Bank (in 1992). Originally, the banks all traded under their own name, but the group introduced a new brand ‘Absa’ in 1998. In 2005, Barclays bought a majority (56%) stake in Absa. At the time, it said ‘both the Absa and Barclays boards support the vision of creating the pre-eminent bank in Africa’.

From 2011, the two began integrating their operations on the continent, culminating in a name-change of the local business to Barclays Africa Group in 2013. In late 2015, following the dismissal of then Finance Minister Nhlanhla Nene, murmurs swirled that Barclays had made a decision to exit SA. In January 2016, those rumours became a chorus, reported as fact by the Wall Street Journal. The decision to exit Africa was confirmed in February. A three-year separation programme followed and the group changed its name back to Absa Group in 2018.

It operates in 12 African countries and is a top-four player (by income) in six of these, including the major markets of Ghana and Kenya (outside of SA). 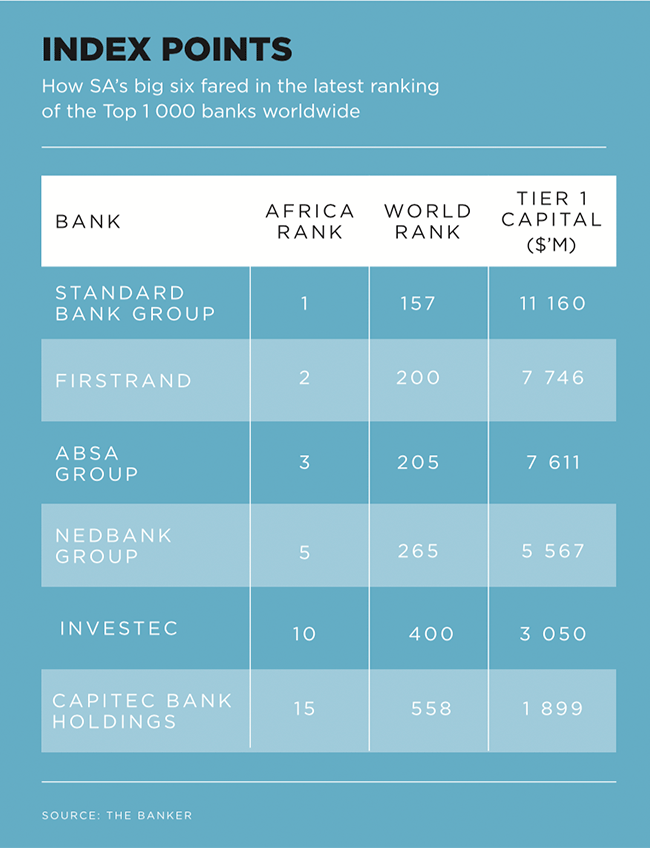 According to outgoing chair Wendy Lucas-Bull, ‘the pandemic is a course-altering event. While the near term continues to look challenging, it is also clear that many areas, such as the digital delivery of various services, have seen significant growth. Following a careful review of our strategy and implementation progress, as well as the external environment and its prospects, we are satisfied that the main thrust of the strategy remains relevant’.

The smallest of the traditional so-called ‘big four’ by market cap is Nedbank, valued at R85.9 billion. Its history traces back to the establishment of the Cape of Good Hope Bank in 1831. The core of the group, Nedbank, started life as the Nederlandsche Bank voor Zuid-Africa, then the Netherlands Bank of South Africa (NBSA), then Nedcor Group in the 1980s. Old Mutual became the majority shareholder in 1986, and it demutualised in 1999, with the listed entity retaining that stake. Nedbank Group, as it is known today, was formed in 2003 through the combination of Nedcor, BoE, Nedcor Investment Bank and Cape of Good Hope Bank. BoE itself had previously merged with Natal Building Society (NBS) and Boland Bank.

In 2014, Nedbank acquired a 20% stake in Ecobank Transnational Incorporated (ETI), following the alliance that was established in 2008. Combined, it contends it has ‘a larger continental footprint than any other bank in the world’, with operations in 36 countries. According to Nedbank CEO Mike Brown, ‘the South African banking system navigated 2020 very well, appropriately balancing supporting clients and the economy while ensuring that the safety and soundness of the financial system were never at risk’.

Capitec, previously considered an ‘upstart’, has been a major disruptive force in the local banking market. PSG would most likely not  have thought that an acquisition of two microlending businesses in 1997 would’ve created a bank of this scale less than 24 years later (it is now third-largest in the country by market cap). Earlier this year it crossed the 16 million client mark – most of these are transactional banking customers. It has steadily chipped away at the market share of the big four, and as it slowly moves into spaces previously the domain of its rivals, such as credit cards, vehicle finance, and insurance, it will continue to make inroads.

Investec is a specialist bank and wealth-management businesses, originally founded in 1974, with operations in the UK and SA. It has a dual-listed structure and a combined market cap of R55 billion. Last year, it demerged its asset-management business, Ninety One (formerly Investec Asset Management). In pound terms, the banking operations in SA and the UK are roughly the same size, when measuring loans and customer deposits. But its wealth unit has a significantly greater amount of funds under management in the UK (£41.7 billion versus £17 billion, as at March 2021).

‘The past year was among the most turbulent in living history. Shock waves from the global pandemic and efforts to contain it rippled through every facet of our lives, with few among us not directly affected – be it by illness, loss of loved ones or disruption of livelihoods,’ says CEO Fani Titi. ‘The 2021 financial year was a tale of two halves. First-half performance was characterised by difficult and volatile market and economic conditions attributable primarily to COVID-19. The second half showed strong earnings recovery, supported by our resilient client base, a rebound in economic activity and a greater sense of optimism spurred on by global vaccination campaigns.’ 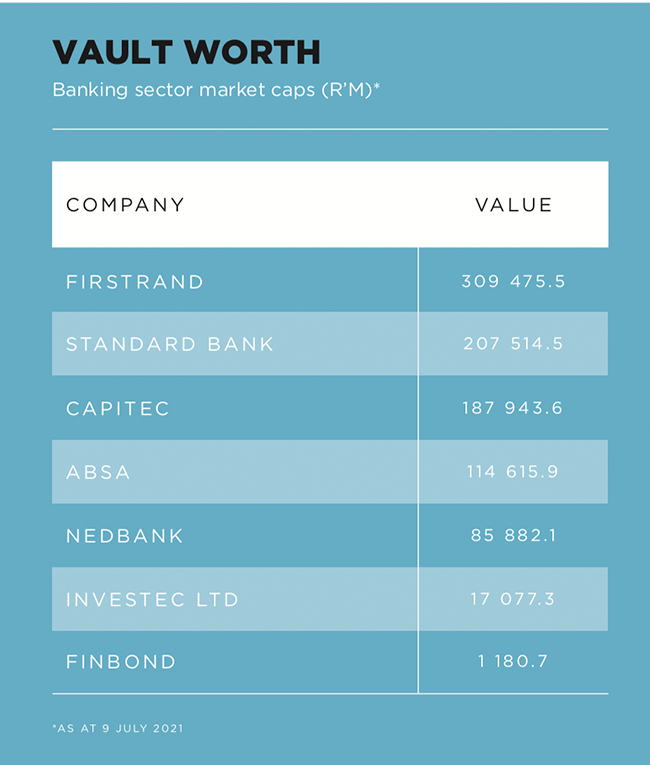 Finbond Group, with a market cap of R1.1 billion, is a niche financial services business, with operations in the US, Canada, Panama and SA. It operates credit/micro-loan businesses in all of these territories, and also has Finbond Mutual Bank in SA. One of the major impacts of the COVID-19 pandemic was the rate at which all banks have shifted distribution to digital channels. ‘The pandemic and mobility restrictions have brought about new ways of working and accelerated customer acceptance of technologically enabled platforms to conduct banking,’ says PwC’s Roopnarain. ‘While South African banks largely recognise that the size, scope and configuration of the physical branch network will change, they will continue to play a central, albeit different, part in their overall channel and distribution strategies.’

PwC’s analysis of SA’s major bank notes that a return to pre-pandemic profit levels is at least a few years away. Yet early indicators in 2021 ‘show a sliver of positivity’ – with increased business volumes, retail credit collections and early-stage debt relief exhibiting a few promising trends. ‘While considerable uncertainty, both from a public health and from an economic standpoint is expected to prevail, the major banks have shown their ability to respond purposefully to crisis conditions,’ says Roopnarain. ‘For the majority of the major banks’ management teams and their people, 2020 will have been the most difficult and complex year on record. With various outlook scenarios dependent on a range of variables, the common consensus is that of more uncertainty ahead.’