TOUCHED BY THE SUN - JSE MAGAZINE

‘The year 2020 should have seen a further boost in relations between the two countries,’ according to Maruyama Norio, Japanese ambassador to SA, who was speaking in February at a celebration for the Japanese emperor’s birthday. The two countries were on a good wicket, only to be temporarily stumped by COVID-19. ‘Nevertheless, despite such difficulties, we had several occasions to realise bilateral co-operation through various efforts throughout last year,’ he said, the culmination being the Japan-South Africa Foreign Ministers Meeting held in Pretoria at the end of last year, where ministers agreed to further enhance bilateral agreements.

There’s a certain perseverance to Japanese investors. Toyota, for example, has been in SA since the early 1960s, and recently invested billions into expanding its presence in the country. The Japanese motor industry is a prime example of the measured and long-term investment approach characteristic of the Japanese. ‘Japan has been investing in South Africa and the rest of the African continent for a long time,’ says Hideki Machida, senior manager in KPMG’s global Japanese practice. ‘And they will continue to have a presence, considering their approach in the past.’

Full diplomatic relations between SA and Japan were established in 1992. Since then, exports by SA have mainly been primary products, including base metals and agricultural products to Japan, while imports are heavily skewed towards technology goods. While other Asian governments, such as China, heavily subsidise private investment from their local companies, the Japanese government is more conservative in its investment mechanisms and decisions. It tends to abide by doing due diligence before considering a minority stake in an investment. 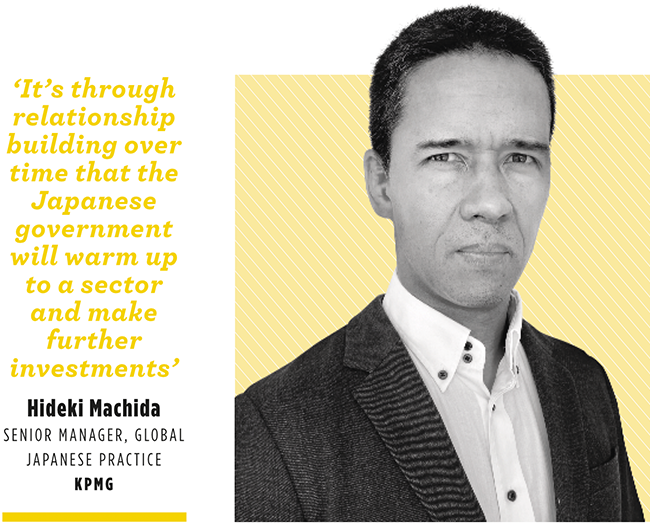 ‘It’s through relationship building over time that the Japanese government will warm up to a sector and make further investments,’ says Machida. ‘Once they invest, they are in it for the long haul.’

In January 2020, Toyota South Africa Motors (TSAM) announced plans to invest a cumulative R4.28 billion in its SA operations, of which R2.43 billion has been earmarked for the production of the new Toyota Corolla Cross model, set to start production at the Prospecton plant in KwaZulu-Natal, towards the end of 2021. It is reportedly the first hybrid vehicle to be built on the African continent.

Nigel Ward, executive VP of manufacturing and manufacturing support at TSAM (and president of the Durban Chamber of Commerce), said in an early-2021 media release that the manufacturing of the new model will also include the development of three new Tier 1 and a number of Tier 2 suppliers, which is a significant step towards the transformation of the automotive value chain. TSAM CEO Andrew Kirby added that the project ‘couldn’t have been possible without the policy certainty […] established by the South African government, with the introduction of the APDP2 Trade Related Investment Measure. This car is tangible proof of our commitment to the local motor industry, as well as the South African economy’.

During the initial waves of the pandemic, Japanese companies operating in SA provided face shields and masks to public institutions in SA, while Toyota has donated 100 000 face shields and contributed towards PCR testing equipment and the renovation of hospitals.

There were fears that the recent unrest in KwaZulu-Natal would impact future investment and current operations at the plant, but TSAM downplayed media headlines intimating that the company threatened to close shop due to threats to its operations. The company said it merely sought a definite plan from the local government on how it planned on dealing with the social unrest. The Prospecton plant currently produces the Hilux, Fortuner, Hiace and Corolla Quest.

The investment will generate an additional R2.85 billion towards the SA economy a year and create around 1 500 new jobs, Kirby told Engineering News. Other investments include a R365 million funnel to double the size of its Atlas warehouse in Gauteng to 80 000 m², which would make it the largest automotive-parts warehouse in the southern hemisphere.

Toyota is but one cog in the Japanese automotive market in SA. Nissan, Isuzu and Mazda are also heavy hitters. In 2019, Isuzu announced a R1.2 billion investment in the next-generation bakkie programme in SA. ‘Project teams from Japan, Thailand and South Africa are currently working full steam ahead on this project with a priority focus on engineering the vehicle to meet the requirements of our customers in the Africa markets and also in terms of increasing localisation opportunities,’ Isuzu CEO Billy Tom said at the time. He also hinted at talks with Isuzu Japan about bringing the assembly of the next generation of trucks to SA. 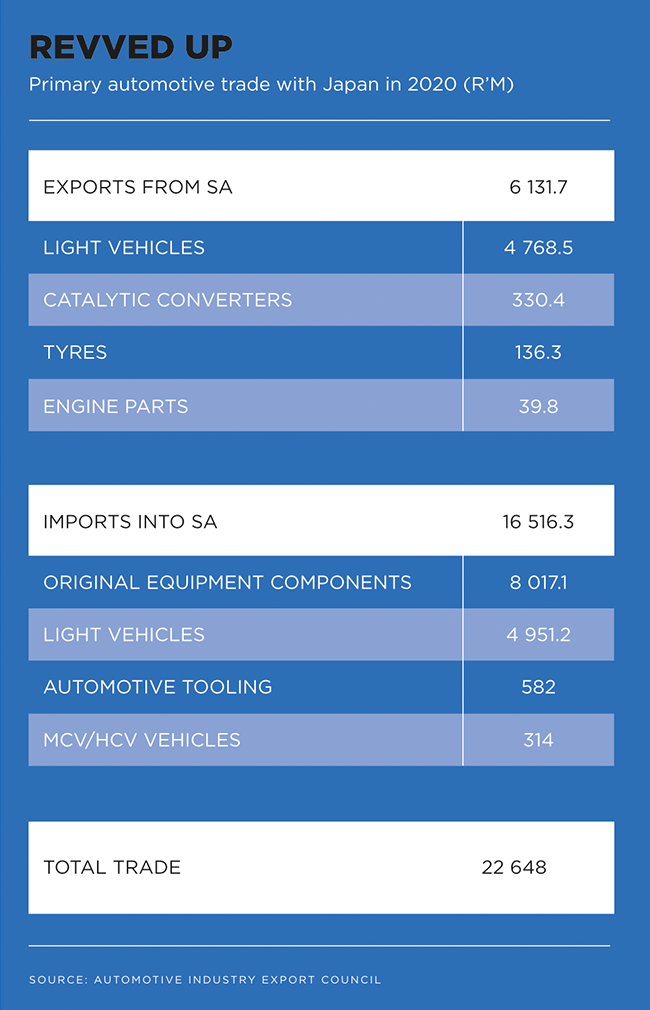 Machida says that investors also look to other sectors, such as infrastructure, natural resources, mining, renewables and fast-moving consumer good industries. As of 2019, there were 160 Japanese companies in SA, many of them large trading houses such as Mitsubishi. Other companies – including NGK Spark Plug Company, an automotive component supplier, and Komatsu, which produces shovel cars for the mining industry – operate in the supply chains of the automotive and mining industries. Sumitomo Rubber South Africa produces Dunlop and Falken tyres.

Dimension Data, which represents the Japanese IT behemoth NTT’s business in the Middle East and Africa, also announced late last year the construction of its Johannesburg data centre. When fully built it will deliver a total of 6 000 m2 of IT space and 12 MW of IT load. The first phase of the site is scheduled to be operational by 2022. ‘Africa’s digital transformation will be accelerated with the right infrastructure investments,’ according to Grant Bodley, Dimension Data CEO. ‘This partnership, bolstering our already significant data-centre footprint, comes at a time when demand for digital content, cloud services, new technologies such as internet of things, mobile money, and content delivery networks are on the rise.’

In helping Japanese clients with due diligence in SA, Machida says he’s noticed Japanese interest in fintech and agritech, as well as renewable energy. ‘There have been consortia through Japanese companies that have applied in Round 5 of the Renewable Energy Independent Power Producer Procurement programme.’

Areas of interest in the mining sector include clean energy, such as hydrogen. As a nation, the Japanese have the technological knowledge, which they can export to SA to be utilised on the ground. These companies usually look to partner with other companies in bringing out the strengths of the private sector.

The large trading houses, essentially companies that do it all, can play a vital role in renewables investment, says Machida, seeing as they are able to mobilise funding to realise these projects, and then bring in the technology to enable these deployments. ‘From an operational perspective, these deals are structured long term, and over this process the companies work with various industries, which in turn leads to job creation in the local economy.’

Elsewhere in Africa, Japanese investment has mainly been focused on hydrocarbons and mining, as reported by Africa Business. In Mozambique, Mitsui & Co invested billions into coal and gas, an investment that was backed by the Japan Oil, Gas and Metals National Corporation.

Machida says the growing populations in SA and the rest of Africa – in contrast to Japan’s shrinking population, with a median age of 48 – counts as strong draw card for Japanese investors. Hiroyuki Nemoto, executive director of the Japan External Trade Organisation (Africa), echoes this sentiment in a media release, where he says that the size of the SA market ‘represents tremendous opportunities and is one of the main attributes of doing business here’. In the same release, Noria notes that the areas for co-operation between the two nations are many and varied, one notable being Industry 4.0, which focuses on big data and AI.

‘People-to-people exchanges will continue to bring our two countries closer together,’ says Noria. ‘I am confident the business climate in South Africa will continue to improve and attract even more Japanese investment.’