How do you know if a company or product is green? If your ‘cleaner’ car genuinely emits less carbon than its competitors? If your supermarket group really keeps its recycling promises? And if your bank truly only finances climate-friendly projects?

Just because something is labelled ‘eco’, ‘green’, ‘bio’, ‘clean’ or ‘environmentally conscious’, it doesn’t mean it actually is. Many sustainability claims are hard to prove, while others have shown to be false, with some outright fraudulent. But the latest AI technology and efforts towards common standards and scientific benchmarks are aiming to detect, monitor and curb ‘greenwashing’ – where companies inflate their environmental credentials to mislead their customers, be it out of carelessness or deliberately.

This is of particular interest for investors who are putting an ESG (environmental, social and governance) lens on their portfolio and want to be assured that their investee companies have a clear ESG strategy and are sincerely trying to make a positive impact, rather than using PR agencies to make them appear responsible or, worse, covering up practices that are harmful to the environment and society.

Liezl Groenewald, senior manager of organisational ethics development at the Ethics Institute, explains why preventing this type of behaviour is important for the country and its transition to a low-carbon economy. ‘Greenwashing is nothing other than a company blatantly lying to its consumers to enhance its reputation and increase its competitiveness and share price,’ she says.

‘Such lies and dishonest intentions are in themselves, obviously, unethical and point to a lapse in good corporate governance. The latter is based on an ethical foundation. Get the one wrong and the other suffers correspondingly. Environmentalists and eco-friendly consumers are willing to pay more for products that they perceive as meeting their care for the environment philosophy.

‘The main danger is that greenwashing can mislead consumers to act in an unsustainable manner. If claims of eco-friendly products turn out to be lies, consumers have unintentionally contributed to harming the environment by supporting the company. An occurrence that stands exactly opposite to consumers’ beliefs,’ says Groenewald, who is also the author of several ethics manuals, the most recent being the Whistleblowing Management Handbook. 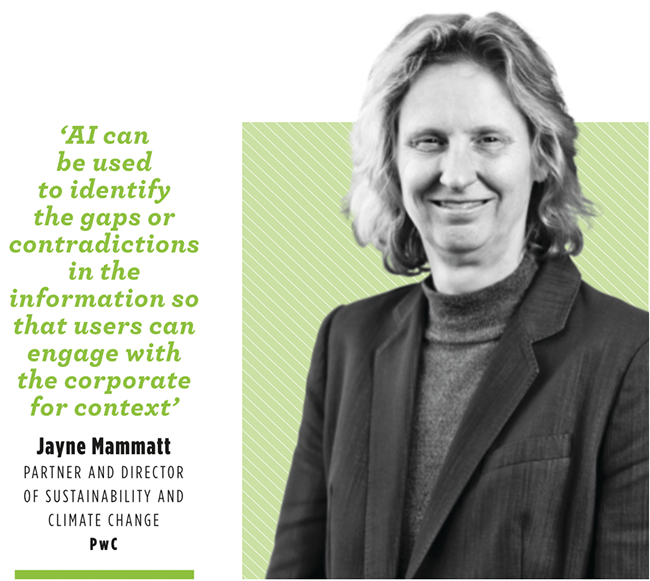 When greenwashing is uncovered, the company’s reputation and credibility typically take a huge knock. ‘A brand is a promise kept, not a promise made,’ says Carla Enslin, co-founder and head of strategy and new business development at Vega School, a private tertiary institution for design, marketing and branding. ‘Greenwashing will damage the brand, now and in the future. Imagine the loss of trust and pride in the company that its stakeholders – consumers, current and prospective employees, suppliers and strategic partners, industry bodies and so on – will feel. The lack of respect and responsibility towards them and society at large will resound throughout the business and for future brand-building. People will ask themselves: if the company has lied to us about this, what else might it be prepared to do?’

Enslin explains that advertising and marketing agencies have a responsibility to not become complicit in greenwashing campaigns. ‘It would be naive and certainly irresponsible to believe your business is the one that will escape scrutiny,’ she says. ‘We live in an age of increased scepticism about shared values, and increased social activism as a result. Be familiar with and keep abreast of codes of conduct in all respects, and ensure that brand audits, reviews and strategic plans are organically embedded in a shared-value perspective and practice. In fact, if we consider that the relationships that you establish and build with clients are a natural extension of your own identity, your own agency culture should be committed to healthy brand-building practices, those which you can live with easily.’

When trusted brands are exposed as greenwashers, the damage is enormous. Carmaker Volkswagen lost more than €32 billion in fines, refits and legal costs as a result of fraudulent emissions claims, as reported by Reuters. Five years after the 2015 ‘dieselgate’ scandal broke, damages were still rolling in, on top of the long-term reputational harm. Yet greenwashing occurs across all sectors of the economy. In July, an analysis of 50 major fashion brands revealed that many were routinely deceiving consumers with false green claims. The Changing Markets Foundation report assessed European high-street to luxury brands according to the amount of fossil fuel-based materials in their collections and their commitments to move away from them.

It found that 59% of green claims didn’t comply with the guidelines of the UK’s Competition and Markets Authority for various reasons, including stating that the synthetic products are recyclable when no such recycling technology exists. One brand that is also popular in SA was shown to have a higher synthetic content in its Conscious Collection line than in its conventional one (72% versus 61%).

‘Companies are making very strong, bold claims about their sustainability credentials, but how true are these?’ says Theodor Cojoianu, assistant professor in finance at Queen’s University Belfast in Ireland and one of the founders of GreenWatch, an AI platform to detect and monitor greenwashing. ‘As researchers, our idea was to put together the bold, climate-friendly claims made by corporates and their CEOs, and then come up with a scientific benchmark of what it means to be sustainable,’ he says. ‘Our goal is to change the world through scientific data. We want to dispel people’s false sense of comfort in corporate green claims by educating them on scientific benchmarking. Ideally, we’d like companies, and particularly their executive teams, to tone down their claims and be truthful.’

As ‘tech for social good’, GreenWatch is currently in beta-testing by the financial services sector – institutional investors and policymakers, as well as NGOs. Eventually it may also become available to retail investors. ‘We analyse the sustainability claims by company CEOs on their websites, social media and annual reports, starting with the MSCI World Index, which also includes a few South African ones,’ says Cojoianu. ‘We then compare the green statements with the company’s carbon-emission data to see whether the claims hold up.’ In early findings this didn’t seem to be the case at all, but the team is still busy measuring the full extent of greenwashing. 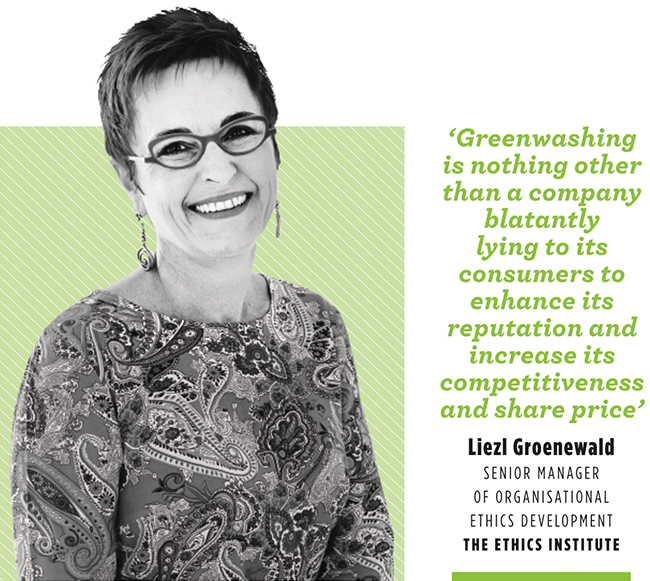 Another new AI tool, developed by Swiss and German academics, also points towards large-scale greenwashing. Called ClimateBert, it assessed the annual reports of more than 800 companies that support the Task Force on Climate-Related Financial Disclosure (TCFD) to establish whether their climate disclosure improved as a result of backing the TCFD over the past six years.

However, the scientists say, ‘supporting the TCFD seems to be cheap talk, with companies cherry-picking which disclosures to make based on the TCFD categories that require the least materially relevant information’. They suggest that converting voluntary reporting into mandatory disclosure requirements could resolve the cheap talk and cherry-picking, saying that ‘some countries are in the process of doing this already. New Zealand, the UK and Switzerland have implemented or announced that they will implement mandatory TCFD reporting’.

The EU, meanwhile, is working on the world’s first rulebook classifying green economic activity. By 2022, the EU Taxonomy will provide companies, policymakers and consumers with a science-based list of what exactly can be considered as sustainable economic activity. In another major development, the International Financial Reporting Standards Foundation is about to launch a sustainability standards board with the mandate to ‘drive international consistency of sustainability-related disclosures’. This would harmonise the fragmented standards established by the five leading ESG framework and standard-setting institutions.

‘Standardised reporting is crucial, but assurance needs to play a larger role in creating trust in the process and content of reporting, beyond performance metrics,’ says Jayne Mammatt, partner and director of sustainability and climate change at PwC. ESG reporting should be elevated to the same level as financial reporting, with robust metrics and disclosures to assess the impact of business on key sustainability issues.

In terms of assessing the authenticity of corporate climate claims with the help of tech tools such as GreenWatch and ClimateBert, Mammatt argues that ‘AI can play an increasing role in analysing vast amounts of information and data that is generated and making sense of it. There still needs to be some level of human assessment or interpretation but AI can be used to identify the gaps or contradictions in the information so that users can engage with the corporate for context. This can cover all aspects of the ESG agenda’.

That could be useful for SA, where companies are increasingly scrutinised not only on their carbon emissions, water use and waste policy (the E in ESG) but also on the S and G – their social performance in terms of labour relations, diversity and inclusion, as well as issues of good governance. By making it more difficult to get away with greenwashing and other unethical behaviour, companies will hopefully be nudged towards behaving more sustainably.