The year 2020 was an unprecedented one for both Sasol and Omnia, two of the companies in the JSE’s chemicals sector. The COVID-19 pandemic and impact of harsh lockdowns across the globe roiled markets. Commodity prices plummeted and Brent crude oil actually traded negative for a period. Both of these companies had large amounts of debt and, therefore, stretched balance sheets. Sasol’s situation was more distressing. In its case, loan covenants – which typically require net debt to EBITDA (earnings before interest, taxation, depreciation and amortisation) to remain below a certain level – were waived by bankers in June, and renegotiated to a more accommodating level by the end of the year (this was not unique to the group).

Addressing investors in December 2020, Sasol president and CEO Fleetwood Grobler described it as an ‘extraordinary year, and for Sasol, as we entered our peak gearing phase, the onset of the COVID-19 pandemic and crude oil price collapse, could not have happened at a worse time’. The heavily geared balance sheet – debt was R190 billion – as well as the need to reduce carbon emissions forced the group into a wide-ranging ‘strategic reset’.

The main contributing factor to this peak debt scenario was the construction of its Lake Charles Chemicals Project (LCCP) in the US. The Louisiana plant saw cost overruns of billions of dollars (from an original $8.9 billion to an eventual $12.9 billion) and joint CEOs Bongani Nqwababa and Stephen Cornell stepped down following a board review in 2019.

To deleverage its balance sheet, Sasol had to divest $3.5 billion in assets – and quickly. In fact, in March 2020 it actually foresaw the need to potentially raise up to $2 billion through a rights issue. At the low in March, its share price was a touch below R21 (from more than R300 at the end of 2019). This meant it had a market cap of around R14 billion (at the end of the US trading day, it was under $850 million), showing just how tenuous the situation was at the time.

The first of many actions taken to respond to the situation was the conservation of cash. It sold a 50% stake in its LCCP base chemicals business to global giant LyondellBasell for $2 billion. Executives will have rued the fact that the group was forced into this sale at the bottom of the cycle (considering that construction of the entire plant cost nearly $13 billion). Locally, it disposed of 16 air separation units to Air Liquide for R8.5 billion. It also sold a 50% stake in a Texas polyethylene plant as well as its interests in gas-to-liquids plants in Nigeria and Mozambique.

According to Paul Clark, equity research analyst at FNB Wealth and Investments, Sasol’s ‘balance sheet has de-geared and earnings have improved substantially, with higher oil and chemical prices and currently a weaker rand. Dividends should resume soon’. For the year ending 30 June 2021, Sasol reported EBITDA of R48.4 billion, with total debt down to $7.2 billion from $10.9 billion a year earlier. This saw gearing decrease to 61.5% from 117%. Excluding various impairments, gearing declined to 54%. Clark notes that ‘investors will have to decide how much the discount to previous valuations should be to account for the increased environmental concerns for these companies. Sasol recently presented a potential path to carbon reductions of 30% by 2030 and further to carbon neutrality by 2050’. 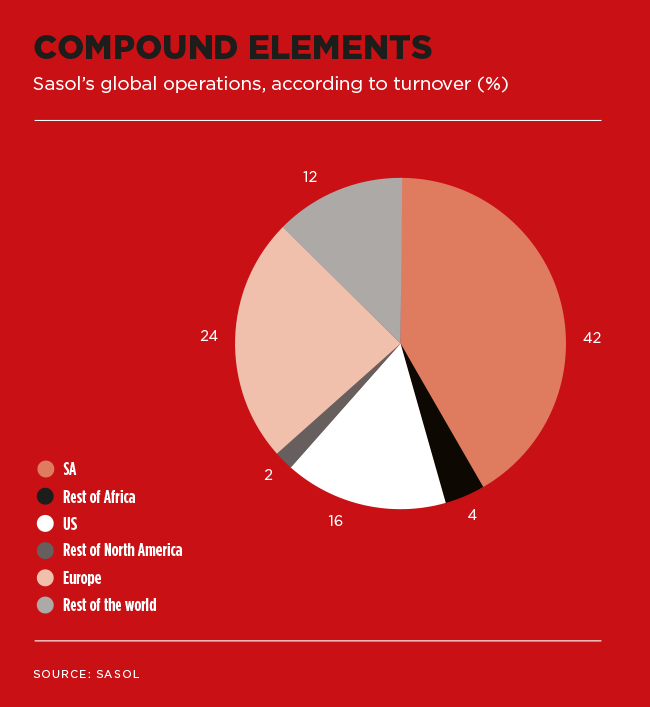 Sasol has been in operation for more than 70 years, having been established in 1950 as a government-sponsored public company, officially named the South African Coal, Oil and Gas Corporation. The father and first employee of Sasol, Etienne Rousseau, had proposed the name South African Synthetic Oil Limited, or Sasol.

Prior to that, work on producing oil from coal had started, with Anglovaal pivotal in these efforts. Its involvement began in the 1930s when it created the South African Torbanite Mining and Refining Company (Satmar) in partnership with the Burmah Oil Company. Satmar was originally focused on extracting oil from shale. In 1935, it purchased a licence to build a Fischer-Tropsch plant in SA, but because of falling oil prices and World War II, it only began working on the project seriously after the war. It eventually abandoned its plans as it could not raise the finance and it was attracted by gold discoveries in the Orange Free State, a business it was already in.

The first phase of the Sasol plant in Sasolburg – a town founded for its construction – was completed in 1955. It invested in the US Kellogg (Synthol) as well as the German Ruhrchemie-Lurgi (Arge) synthesis processes in a two-thirds US and one-third German ratio. Engineers from the US were in charge of co-ordination and construction of the plant. This plant shifted to exclusively chemical production in 1998, and the Synthol reactors were decommissioned.

The 1970s oil price shock – where prices had risen nearly 300% – saw the country push to become less reliant on imported crude oil. At that point, Sasolburg was operating efficiently.

Secunda (Latin for ‘second’) was selected as the site for Sasol Two; this was the second town established for the purpose of building a plant. Construction of Sasol Two was completed in 1980 and work on Sasol Three (a replica of the second plant) got under way shortly thereafter. These two plants were effectively merged into a single hub thereafter.

Aside from Sasol’s primary listing, with a market value of R179.5 billion at the start of 2022, it also has a listing for its black economic empowerment shares (SOLBE1), which has traded on the empowerment segment of the JSE since June 2018. These shares can be traded among black South Africans only, and have a market value of nearly R90 billion.

Craig Gradidge, co-founder of Gradidge-Mahura Investments, says the attraction of SOLBE1 for qualifying investors is the relative discount to Sasol ordinary shares. Over the long term, this has typically been around 25% to 30%, while recently it has been closer to 40% to 50%.

‘SOLBE1 ranks pari passu with Sasol, so any dividend that Sasol declares SOLBE1 shareholders also get. This puts SOLBE1 on a very attractive forward dividend yield based on current expectations. Investors therefore stand to make a return from the discount normalising, and from locking in potentially high dividend yields. They will need to be patient though, as the recovery process is still under way for Sasol.’

Listed Omnia Holdings also responded swiftly to the unprecedented conditions presented in 2020. The group, which has operations in the chemicals, mining and agriculture sectors, ‘has been on a tumultuous journey over the past few years, with the resilience of our company being tested’, says CEO Seelan Gobalsamy. ‘To stabilise the business, a rights issue of R2 billion was executed in 2019, while maintaining prudent cash management and developing a turnaround plan. Today, Omnia has not only stabilised its business, but has a strong balance sheet with significant cash flows generated from operating activities. Market capitalisation has recovered from R2.4 billion in June 2019 to over R10 billion. In execution of the strategy, Omnia has announced a divestment of Umongo, part of Omnia’s chemicals division, which will generate about R1 billion in cash this year.’ 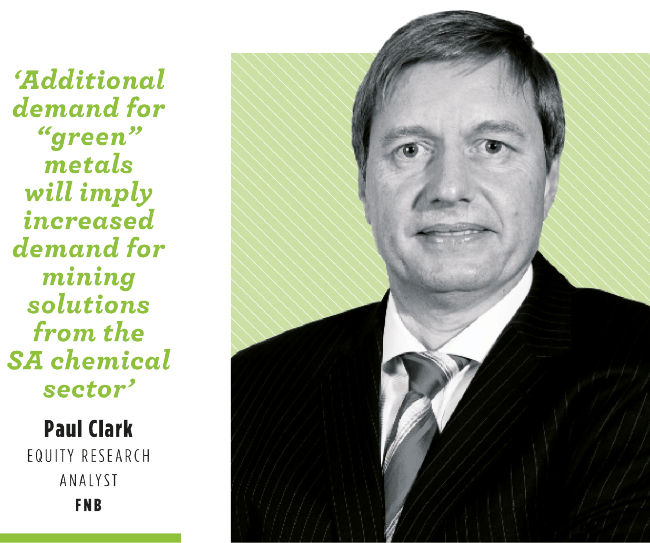 According to Gobalsamy, ‘global supply chain delays and disruptions are expected to continue into the second half of 2022 and significantly affect chemical supply in the region. The business’ strong inventory position is anticipated to create opportunity in the short to medium term’. Its successful turnaround has enabled it to ‘now enter a growth phase. This growth will be focused on capital expansion to balance the large RSA asset base through product and technology innovation and a broadening international footprint’.

The final of the three listed companies in the sector (another, Spanjaard, delisted from the Main Board on 11 January this year) is AECI, which was registered in the 1920s as African Explosives and Industries (AE&I). Its primary purpose then was to provide blasting explosives and detonators to gold and diamond mines but the company was also the only local producer of phosphatic fertiliser. In 1944, it was renamed African Explosives and Chemical Industries (AECI). It listed on the JSE in 1966. It has a market value of R12.1 billion and successfully navigated the turmoil brought about by the COVID-19 pandemic. At the start of the pandemic (in mid 2020), its gearing was only 32%. By June 2021, it had managed to further reduce gearing to 27%.

In the first six months of 2021, it generated revenue of R11.8 billion, with 43% of this derived from exports and foreign operations. Its three largest segments are mining, agri-health and chemicals. Together, these comprise nearly 95% of revenue (it has a nascent, but growing water business).

It says the group is ‘well-placed to maximise opportunities as the world normalises further from COVID-19, and mass vaccination programmes accelerate. Although a level of uncertainty persists in terms of recovery from current and future waves of the COVID-19 pandemic across economies and sectors of activity, the business environment is more supportive. The current global commodity boom is expected to assist not only AECI Mining but our other businesses whose customers service this sector’.

Clark says that ‘the companies in the listed chemicals sector have quite cyclical earnings and rely on the mining sector and agricultural sector. In Sasol’s case, earnings are largely a function of the rand-denominated oil price’. He adds that the shift to greener technologies will be a transition. ‘Most targets are for about a 30% carbon reduction by 2030, and a move to carbon neutrality by 2050, which is a long way off. In this transition, mining will play a key role and additional demand for “green” metals will imply increased demand for mining solutions from the South African chemicals sector. The demand for food is not expected to decrease as the global population will still continue to grow – probably until 2050.

‘The demand for agricultural services as well as chemicals from this sector will therefore not decline in the medium term. As far as oil is concerned, a decline in demand is not expected before 2030. Even by then, if electrical-vehicle manufacturing grows at the very top end of expectations and the demand for motor vehicles continues to rise, we will most likely only see a reduction in internal combustion vehicle production of 20% from current levels at best. This coupled with the reluctance of oil companies to invest in new capacity implies a volatile transition, where oil could be in short supply from time to time.’