Unique on the bourse, the general mining sector boasts three major global companies: diversified mining giants Anglo American, BHP Group, and Glencore. Together these three have a market cap of around R1.8 trillion, as at mid January 2019. They are listed on other global exchanges, including the LSE and ASX. Two of the trio – Anglo and BHP – are among the 20 best performers on the JSE for the year to end-November 2018.

While Anglo has been a mainstay of the SA bourse for decades, and BHP since the merger with Brian Gilbertson’s Billiton in 2001, Glencore (then Glencore Xstrata) completed its secondary listing on the JSE only in 2013. At the time, JSE CEO Nicky Newton-King said it was a ‘huge accolade for the exchange that a multinational company of Glencore Xstrata’s size and stature would select the JSE for its secondary listing… The listing reflects well on South African financial markets and sends a positive message to potential issuers – both local and international’.

The group, founded in 1974, listed in London in 2002. It describes itself as ‘one of the world’s largest natural resource companies’ and differs from both Anglo and BHP in that it is significantly more active in actually marketing the commodities it produces. Its market value, as at mid January, was about R760 billion.

It argues it is ‘active at every stage of the commodity chain: exploration, acquisition and development; extraction and production; processing and refining; blending and optimisation; [and] logistics and delivery’. Glencore has operations at 150 sites across 50 countries, with more than 146 000 employees and produces in excess of 90 different commodities. These include copper, cobalt, nickel, zinc and lead, ferroalloys, coal and oil. In fiscal 2017, it reported revenue of $205.5 billion, and earnings before interest, tax, depreciation and amortisation (EBITDA) of $14.762 billion. 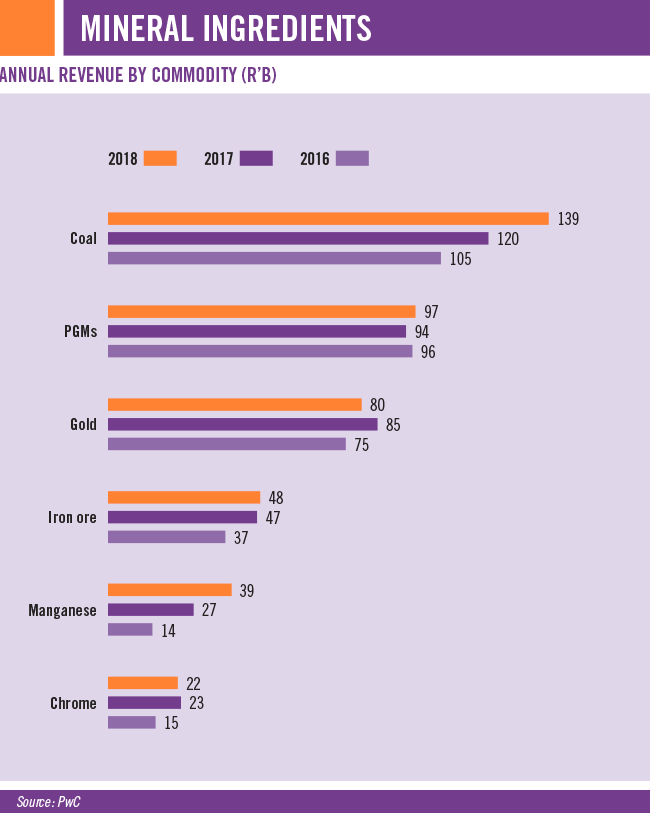 Glencore began marketing activities in SA in 1974, with mining starting in 1988, and it has a ‘strong presence’ in the coal and ferroalloy sectors. More so than its diversified peers, Glencore argues that the emergence of electric vehicles (EV) underpins demand for its commodities, chiefly copper, nickel and cobalt. It cites research predicting a CAGR of 30% in battery EV sales to 2030, leading to an increase in demand for metals. On average, each EV uses 84 kg of copper, 30 kg of nickel and 8 kg of cobalt.

The demand, however, is not confined to vehicles. There are ‘implications across the value chain’ including generation and grid infrastructure (as well as storage), and charging infrastructure. Glencore forecasts ‘strong production growth across these three core EV metals’ between 2017 and 2020.

BHP Group (renamed from BHP Billiton in 2018), with a market value of around R600 billion on the JSE, has been in existence for 133 years and has at least 62 000 employees and contractors in more than 90 locations worldwide.

The group’s listing is unique in that only a portion of the dual-listed group is counted on the JSE (shares that originated from Billiton, which was listed in SA prior to the 2001 merger with BHP). It spun out a number of assets in 2015 to form South32 and narrow its focus on four primary commodities, namely iron ore, copper, petroleum and coal. Its minerals portfolio comprises ‘tier one assets’ in Australia and the Americas (primarily South America, with the exception of the Canadian potash unit). Olympic Dam in South Australia is one of its flagship assets as well as ‘one of the world’s most significant deposits of copper, gold, silver and uranium’. In fiscal 2018 (to 30 June), it reported underlying EBITDA of $23.2 billion on revenue of $43.6 billion.

The South32 business is sizeable in its own right: its market value is R172 billion and it is the biggest demerger in mining history. It comprises most of the previous Billiton assets merged into BHP in 2001, with operations spanning aluminium, silver, lead, zinc and thermal coal. These are primarily in Africa, Australia and South America. Locally, South32 operates an energy coal unit, two manganese mines (and a smelter), and two aluminium smelters (Hillside in Richards Bay and Mozal in Maputo).

South32 has more than 14 000 employees across seven countries and in fiscal 2018 reported underlying EBITDA of $2.5 billion on $7.5 billion in revenue. It says it is ‘actively reshaping’ its portfolio, with a ‘bias to base metals’.

Anglo American, the ‘grandaddy’ of mining in SA, was founded in 1917 by Ernest Oppenheimer. Since listing, it has had an out-sized influence on the exchange and on the SA economy more broadly, spawning a number of companies, including industrial conglomerates and associated companies in the explosives, chemical and commodity spaces.
The company has vastly reshaped its portfolio over the past five years, with a focus on four pillars – diamonds (via market leader De Beers), copper, platinum group metals, and bulk commodities and other minerals. CEO Mark Cutifani says this has contributed ‘to the materially improved financial and operational performance. We have moved from a total of 68 assets in early 2013 to 36. The disciplined and natural process of divesting assets that do not meet our return criteria or long-term value potential will continue’. In fiscal 2017, it reported underlying EBITDA of $8.8 billion on revenue of $26.2 billion. In SA, its platinum business – Anglo American Platinum – is the largest producer globally of the metal, producing ‘37% of new platinum mined globally each year’. Anglo American Platinum is listed separately on the JSE, as is its iron ore unit Kumba Iron Ore.

Until recently, a ‘substantial portion’ of its thermal coal production was used by Eskom. Today, it says ‘the focus is firmly set on a select group of high-performing Mpumalanga-based assets for the supply of around 19 million tons of thermal coal a year to export markets across several continents’. It sold Eskom-tied thermal coal mines (including New Vaal, New Denmark and Kriel) and the New Largo thermal coal project, near the Kusile power plant, to Seriti in 2018. Globally, it has operations in Australia, Brazil, Chile, Finland and Peru. 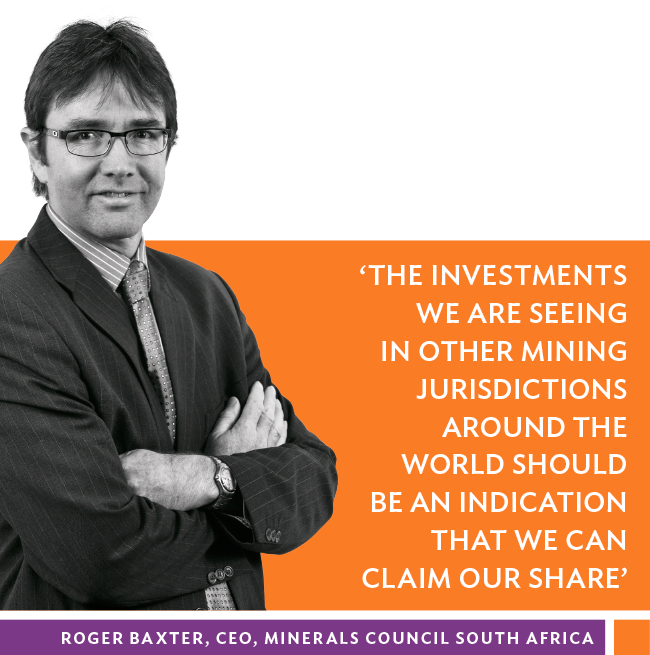 PwC, in its influential annual Mine 2018 report, makes the point that ‘perhaps the most significant risk currently facing the world’s top miners’, such as Glencore, BHP, Anglo and others, ‘is the temptation to acquire mineral-producing assets at any price in order to meet rising demand. In the previous cycle, many miners eschewed capital discipline in the pursuit of higher production levels, which set them up to suffer when the downturn came. While we expect capital expenditure to increase … as companies implement their long-term growth strategies, miners must be careful to maintain discipline and transparency in the allocation of capital. They need to resist the urge to pursue projects or acquisitions at any price and, instead, focus on mining for profit, not for tons’.

The next tier, by market cap, is locally focused producers. Assore, with a value of around R40 billion, and African Rainbow Minerals (ARM), at R30 billion, are linked in that they co-own ferrous metals miner and processor Assmang. This asset is Assore’s principal investment, and it is ‘responsible for marketing all products produced by the Assore and Assmang groups, the bulk of which are exported and the remainder either used in the group’s beneficiation processes or sold locally’.

ARM has three main units, focused on platinum group metals, ferrous metals (including its Assmang investment) and coal. ARM also holds a 14.6% stake in gold miner Harmony. In the year to June 2018, the ferrous and coal units contributed 92% of the group’s earnings.

There are four more companies listed in the general mining sector that have a market value in excess of R1 billion: Tharisa (at approximately R5.1 billion), Merafe Resources (R3.5 billion), Tawana Resources (R1.3 billion) and Kore Potash (R1.5 billion). The last of these is also the most recently listed, making its debut on the JSE in March 2018 with a secondary listing (its primary listing is on the ASX). Its primary asset is a 97% stake in the Sintoukola Potash Project in the Congo. Potash is a potassium-rich salt, which is a key ingredient in fertilisers for agriculture. 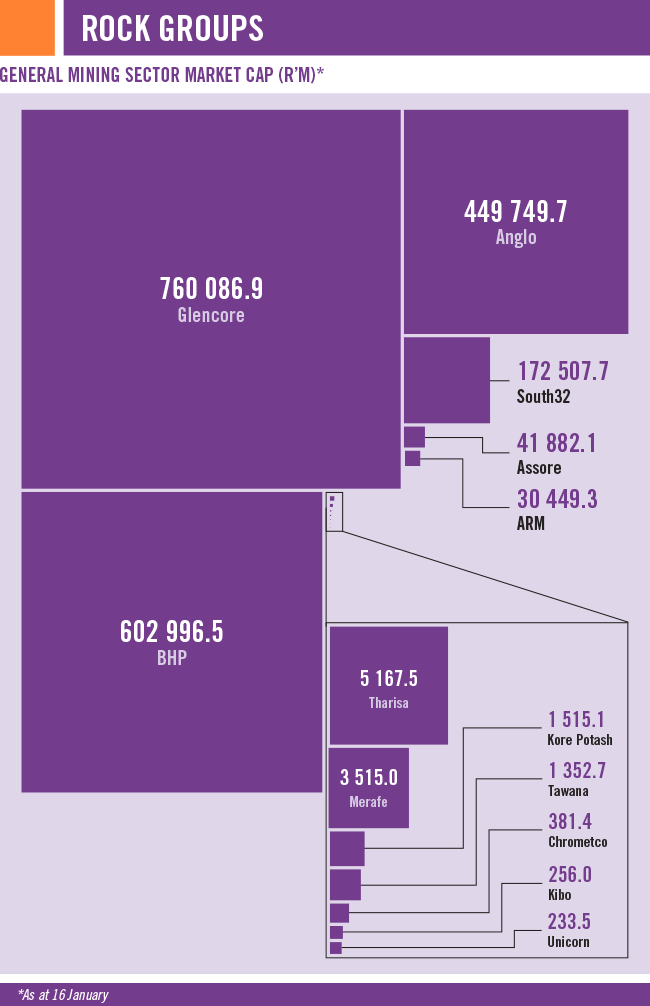 Tharisa listed in 2014 and it owns and operates Tharisa Mine near Rustenburg. Merafe Resources holds a 20.5% stake in the Glencore-Merafe Chrome Venture (formed in 2004), which is reportedly the world’s largest ferrochrome producer. Ferrochrome is produced by the smelting of chromite and contains iron, chrome, and minor amounts of carbon and silicon, as well as impurities such as sulphur, phosphorus and titanium. This material is a key ingredient in the production of stainless steel, and a substantial amount of global production is used for this purpose. Tawana produces lithium concentrate at its ‘principal project’ – Bald Hill mine in Western Australia.

There are a handful of, by comparison, smaller companies listed in the sector too, including Chrometco, which has chrome and platinum prospects and operations in North West province; Kibo Energy, with thermal coal projects in Tanzania, Botswana and Mozambique; and Unicorn Capital Partners (formerly Sentula Mining) – a holding company whose portfolio ‘includes the provision of overburden drilling and blasting, mobile crane hire and exploration drilling services, as well as an operational anthracite mine’.

Despite some of the companies in this sector – especially the larger ones – not being wholly linked to the fortunes of the SA mining industry, nearly all are in some way affected by what happens in the country. And while the environment faced by the mining industry in SA is arguably the harshest it has been in many decades, Minerals Council South Africa CEO Roger Baxter says the sector is also beginning to see the first rays of a ‘new dawn’. In October 2018, he told industry delegates at the Joburg Indaba that mining investment could almost double in four years if SA were to return to the top quartile of the most attractive mining investment destinations.

‘Is such a doubling of investment possible? Absolutely, yes,’ he said. ‘Between 2013 and 2017, real net capital formation in mining declined by 50%. The significant investments we are seeing in other mining jurisdictions around the world should be an indication that we can claim our share.
‘The consequences of a doubling of investment could be game-changing for the industry and the country, including creating another 200 000 jobs in the economy, of which around 50 000 would be direct mining jobs, as well as materially increasing output, exports and procurement. It remains a truism that if mining succeeds, the country succeeds.’