One would assume that a global pandemic would benefit the healthcare sector broadly, but any support in terms of revenue or profit for companies operating in the space is uneven at best.

The experience at the country’s largest medical aid, Discovery Health Medical Scheme, illustrates how the COVID-19 pandemic has sharply impacted hospital utilisation, (in-person) doctor visits and over-the-counter script issuance. Hospital utilisation is 27% lower than last year in the first nine months of 2020. If one considers the lockdown period only, the decline is even more pronounced, with admissions among the scheme’s members about 40% lower in July, even while the country was experiencing a peak in cases. The delay in elective procedures should correct into 2021, with higher-than-average utilisation in hospitals.

Wayne McCurrie, portfolio manager at FNB Wealth and Investments, says the problem with healthcare is that ‘despite the attraction of an ageing population in the developed world, the primary objectives of governments worldwide is to curtail and restrain the cost of medical care for their citizens’. Mediclinic cites a KPMG report, which states that ‘by 2030, the number of people aged over 65 will be more than 1 billion, or 13% of the total population’.

This is echoed by a, which in a note to clients says that, while global demand for healthcare is rising, there is ‘limited ability to control demand meaning most energy is spent on tackling the cost to supply services. Wholesale structural changes to market practice and efficiency are usually the result of regulatory interventions, while pricing is constantly interrogated. As affordability becomes even more of an issue, the continued pressure on healthcare providers will only grow stronger’.

Coronation adds that despite these challenges, well-run hospital businesses should continue to thrive. ‘Private hospitals deliver critical services efficiently in environments where traditional providers (often the government) are very constrained, with limited ability to fund the growing demand.’

McCurrie says that, therefore, there ‘will be regulation with governments ensuring they effectively set tariffs in the sector’. This means the ability of hospital providers to make excess profits has been somewhat curtailed.

The JSE has three large listed hospital groups: Mediclinic International, Life Healthcare Group and Netcare. They all have sizeable, quality hospital businesses locally, but what sets the three apart is the size of their operations internationally.

Mediclinic International, with a market cap of R44.7 billion, is a diversified healthcare services group with operations in Switzerland, Southern Africa and the UAE. It also owns a 29.9% stake in the UK’s Spire Healthcare. While the bulk of the group’s hospitals and beds are in SA and Namibia, revenue from Switzerland (from the Hirslanden business, which it acquired in 2007) comprised almost half the group’s total of £3.1 billion in the last financial year. Profits (£327 million, on an adjusted basis) are more evenly distributed between SA, Switzerland and the UAE. It bought Al Noor Hospitals Group in the UAE in 2015 via a reverse takeover, which enabled it to take over the group’s listing on the London Stock Exchange. 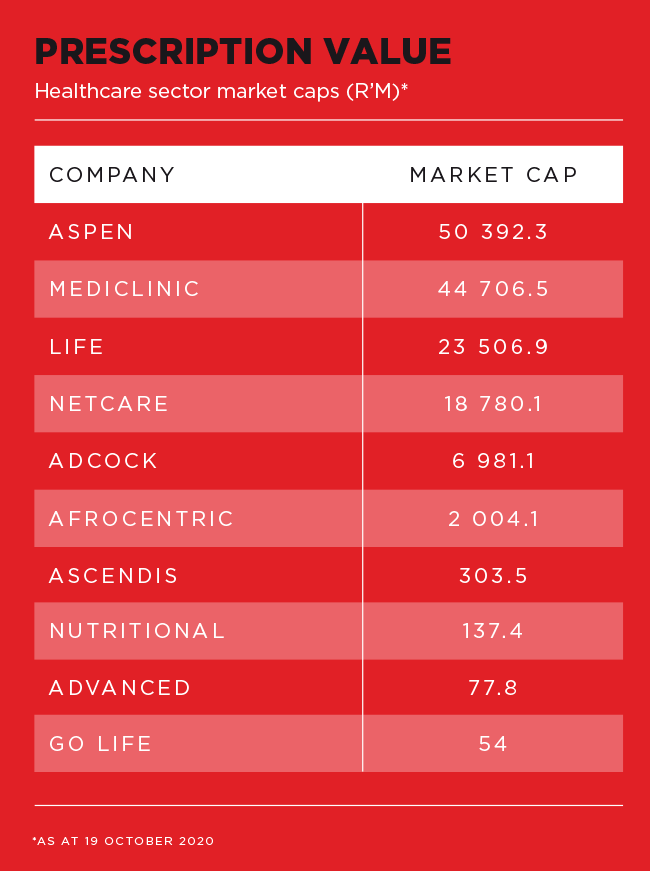 Writing in the group’s annual report in June, group CEO Ronnie van der Merwe says that ‘clearly, we are now operating in unprece-dented times, with COVID-19 presenting a new and significant uncertainty for our business. Our COVID-19 preparedness plans have matured over the last months, greatly enhanced by knowledge-sharing across the geographies in which we operate – each being at a different stage of confronting the pandemic’.

He notes that ‘the pandemic and its consequent national lockdowns and associated actions suspending non-urgent elective procedures are likely to have a significant impact on the group for at least the next 12 months. This will be partially offset by Mediclinic’s response to the crisis, the ongoing primary and acute care services offered across the group, which underpin revenues, and, as already experienced, the anticipated increase in demand from postponed elective procedures as restrictions are relaxed’. He adds, however, that the group’s ‘medium-term outlook post-COVID-19 is positive’.

At Mediclinic’s AGM in July, it said that ‘as lockdown measures are relaxed, the gradual re-introduction of elective procedures and out-patient activities leads to improved operating performance. Switzerland and the United Arab Emirates have passed the initial peak of the pandemic. In June 2020, the operating performances at Hirslanden and Mediclinic Middle East, which represents more than two-thirds of group revenue, were ahead of the prior year’.

By June, Southern Africa had not yet reached the peak. The group said ‘revenue continued to be impacted by the crisis and in June 2020 was down approximately 12% on the prior year’.

Life Healthcare, founded from the former Afrox hospitals business, is the second-largest hospital group in the SADC region, when measured by the number of beds (more than 9 000 registered). It has two international operations, comprising investments in Alliance Medical – a ‘provider of complex molecular and diagnostic imaging services’ – as well as Scanmed, a ‘provider of primary care, ambulatory care and acute care services in Poland’. It has announced its intention to dispose of the Poland operations, with 18 bidders participating. Given the impact of COVID-19, it has suspended this process until the ‘environment stabilises’.

Its market value is R23.5 billion, with group revenue for the six months to end-March 2020 of R13.2 billion. Approximately 71% of this is from the Southern African operations. Life Healthcare says ‘the impact of COVID-19 has varied across the group’s geographic regions and business lines due to the timing of the spread of the disease and the responses of the various governments’. It adds that the ‘estimated impact of the pandemic for the period to 31 March 2020 is lower revenue of R264 million’, with a negative impact on earnings of R132 million.

It says the ‘Southern Africa business performed well up to mid-March 2020 but has seen significant reduction in hospital admissions since then. The average hospital occupancies from mid-March to end-April 2020 were approximately 40%’.

At the end of August, Life Healthcare ‘experienced a low acute hospital occupancy in April 2020 (39.3%) due to lockdown Level 5 and no elective cases. The occupancy levels have improved since April 2020, with occupancies currently up to approximately 61%’. It had treated approximately 9 000 COVID-19 patients in its facilities in Southern Africa by July.

Rival Netcare, with a market value of R18.8 billion, has the most beds of the three groups (10 605 in SA and Lesotho) and had treated 11 913 COVID-19 positive patients between its first case on 9 March and the end of August. Of those admitted, just more than a third (35%) were treated in high care or intensive care. 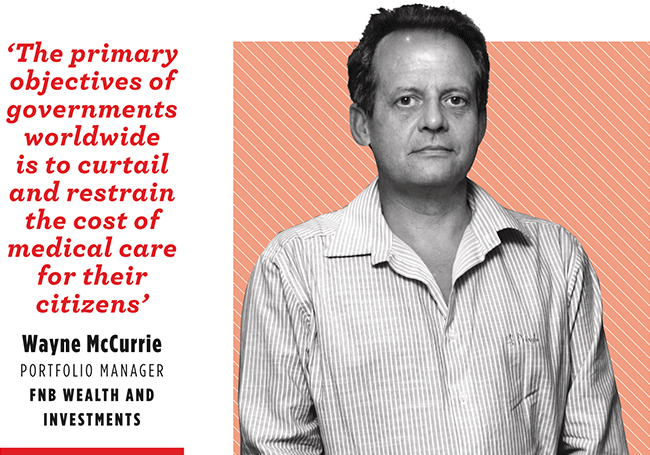 In a September trading statement, Netcare says the pandemic remained a crisis unparalleled in its scope, and unrivalled in its complexities. ‘In the last five months we have seen a shift in our admissions mix with a higher weighting towards medical versus surgical cases. Prior to the pandemic, surgical cases comprised approximately 60% of total inpatient admissions, with surgical admissions declining by 50% during the months of April to August 2020. During this period, COVID-19 cases comprised around 7% of patient days and Netcare treated six COVID-19 state patients.’

The group adds that ‘in line with global trends, a relaxation of lockdown measures may result in a second wave of infections. Nonetheless, during this pandemic, given our experience of bed demand and the reduced lengths of stay due to more effective treatment modalities, our approach to any potential second wave will be far more nuanced and contained in terms of the facilities potentially made available to treat COVID-19 patients’.

Netcare bought Akeso (which operates 12 mental healthcare facilities) in 2016 for R1.3 billion. It has seen continued strong demand for mental health psychiatric care services since the deal was approved by competition authorities in 2018. That same year, Netcare also exited the UK, a market it had entered in 2006 with the acquisition of General Healthcare Group, which operated BMI Healthcare. Richard Friedland, Netcare CEO, said at the time that ‘the UK healthcare market has changed fundamentally since Netcare acquired GHG in 2006 as a result primarily of the global financial crisis and recession that followed. This substantially eroded demand for private medical insurance in the UK’.

There are two smaller listed groups in the healthcare providers sub-sector. AfroCentric Investment Corporation, with a market value of R2 billion, is an investment holding company with operations in medical-aid administration (Medscheme), pharmaceutical disbursement and corporate solutions. Advanced Health, valued at R77.8 million, listed on the market in 2014. It operates day hospitals in SA and Australia (through Presmed).

Beyond the healthcare providers, there are a number of pharmaceutical groups listed on the JSE in the broader healthcare sector. The largest of these, Aspen Pharmacare has a market value of R50.4 billion. After years of acquisitions globally, it has refocused into a ‘specialty pharma company’ weighted towards emerging markets. It says it has trusted and proven brands that are well placed to support the increasing medical demands of these growing populations and increasing medical needs.

Post the recently announced divestment of its thrombosis business in Europe, operations in so-called ‘foundation territories’ will comprise as much as 87% of its total, depending on division. It reported revenue of R38.6 billion, helped by the weakening of the rand against almost all of the basket of Aspen’s trading currencies. ‘The volatility associated with the pandemic has had an adverse impact on our results in the second-half of the 2020 financial year,’ according to a company statement. ‘This impact has varied by timing and region. The hard lockdown in China significantly restricted sales of medicines there for at least three months. 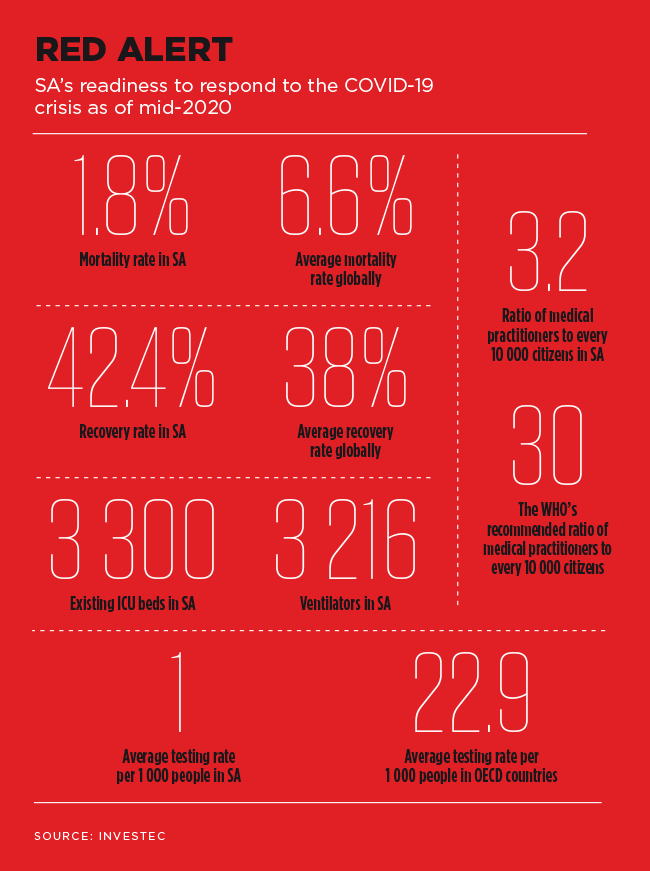 ‘Conversely, early in the first wave we experienced a spike in demand for certain of our medicines, most notably in South Africa, Australia and Mexico. This was followed by the predicted drop in demand as the resultant abnormally high inventory in-market levels were normalised. In Europe, there was a significant need for our sterile products required to treat COVID-19 patients during the height of infections, but a decline in orders for products related to elective surgeries.’

Adcock Ingram, majority-owned by industrial conglomerate Bidvest, is valued by the market at R6.98 billion. It owns a number of well-known brands, including Panado, Bioplus, Compral and Corenza C.

The pandemic did not impact operations, given its position as an essential service provider. But, it says, ‘as the pandemic increased in both magnitude and duration, the group has experienced conditions associated with a general economic downturn, including significant cost-push due to rand weakness, global supply chain disruptions, and declines in demand for certain categories of medicine and products, and consumer discretionary spending’.

In the year to end-June 2020, it reported revenue of R7.3 billion, with the largest contributors its over-the-counter, prescription and hospital units. In May, it acquired Plush Professional Leather Care for R323 million ‘in line with the group’s strategy to expand into less-regulated segments of the market, including home care’.

Ascendis Health, which has a market cap of R303.5 million, listed in 2013 and quickly assembled a portfolio of businesses that operate in the broader pharmaceutical and healthcare space. In recent years, new management has refocused the group and begun an asset-disposal programme to ‘restore the stability’ of its balance sheet. It has three main business units, namely pharma, consumer health and medical. Revenue for the year ended June was nearly R7 billion.

According to McCurrie, pharmaceutical companies may have been less affected by regulation than hospital groups, because of the single exit price dispensation in SA (which sets the price of medicines), but that margins are tightly controlled. This has seen pharmaceutical groups move to adjacent categories (from over-the-counter) where there is much less legislation.

The uncertainty over government’s National Health Insurance scheme remains. However, says McCurrie, this is ‘not a factor today in the companies’ share prices. NHI is a long way into the future – and that was before COVID-19’.