Edgars. Chocolate Log. Cosmopolitan. The COVID-19 pandemic, with its social lockdowns and economic meltdowns, has been a catastrophe for some brands. Dozens have either died, been discontinued or plunged towards business rescue – many of them local mom-and-pop shops, some of them well-established household names. Some, however, have done just fine, thank you.

‘The accelerated consumer shift towards digital is here to stay,’ CEO John Donahoe said in an earnings call, adding: ‘I continue to be excited by the opportunity I see for Nike in digital. We know digital is the new normal. The consumer today is digitally grounded and simply will not revert back. Our Nike Digital business is already meeting our mix goal of 30% – nearly three years ahead of schedule – and we will continue to grow from here.’

In SA, retailer Woolworths reported a 0.1% decline in group sales compared to the previous year for the 52-week period ended 28 June 2020. That was to be expected, given SA’s hard national lockdown. What was not expected, however, was what Woolies called the ‘significant growth in and contribution from online sales across all businesses during and post the lockdown’. The group’s online food sales grew by a monstrous 87.8% in the second half, and by 57.2% for the entire year – and, Woolworths was quick to point out, that growth was ‘notwithstanding the need for further improvements to our fulfilment capability in this area’. In other words, online sales were good… And they could have been even better. Which only serves to underline Donahoe’s point about digital shopping being ‘here to stay’.

Further reports support the notion that this shift towards e-commerce is not a blip, but a fundamental rearrangement of the global retail landscape. Global customer-relationship management company Salesforce summed up the situation in its Q2 Shopping Index report, released in July. ‘When we launched the Q1 Shopping Index in April of this year, we were in the midst of the initial US lockdowns,’ the report states. 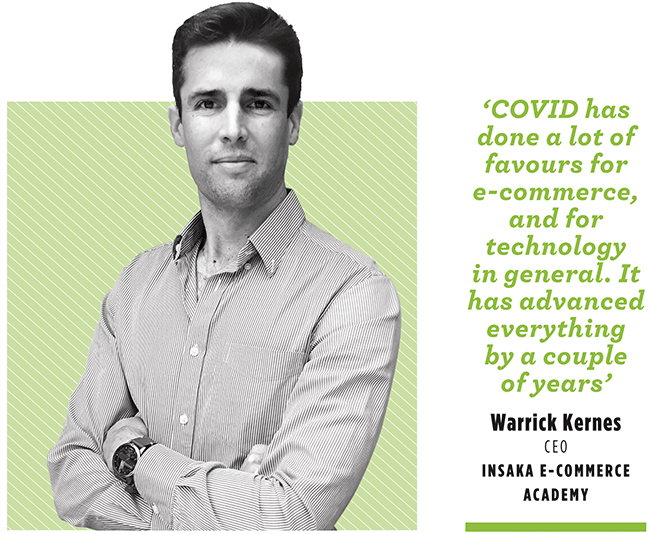 ‘At this point, the data we observed was shocking. A surge of demand, via digital, across retail and consumer goods was taking grip as many brick-and-mortar store closures took place nationwide. We asked ourselves, were consumers over-correcting for the loss of brick-and-mortar and would Q2 usher in normalcy”? But we saw by the end of the second quarter that “normal” never returned. Unprecedented demand online, even greater than a typical holiday season, sustained throughout Q2 with record traffic, conversion, and spend.’

Robin Fisher, Salesforce’s senior area VP of emerging markets, unpacked the numbers in a statement. ‘Salesforce figures show e-commerce revenue in Q1 2020 growing 20%,’ he said. ‘Q2 data recorded in the midst of the COVID-19 pandemic shows unrivalled digital revenue growth of 71% year-on-year for the period. While we don’t expect e-commerce to continue growing at this speed in all geographies, there is clearly room for further growth in emerging markets, such as South Africa. In addition, a 37% year-on-year increase in digital traffic growth over Q2 2019 was seen in tandem with a 34% increase in shopper spend.’

Derek Cikes, commercial director at the buy-now-pay-later fintech Payflex, says that there’s precedent to what we’re seeing during COVID-19. ‘Previous epidemics have foreshadowed this online trend,’ he says. ‘The SARS epidemic in 2003 expedited China’s path in launching digital payments and e-commerce in the country, creating a permanent shift in consumer behaviour. Similarly, the coronavirus has caused a marked change in South Africa’s consumer behaviour and habits, with social distancing, hygiene measures and self-quarantine now integral parts of our everyday realities.’

Cikes says that the COVID-19 pandemic has ‘fast-tracked trends that were already budding in the e-commerce space’ – a sentiment that is shared by Warrick Kernes. 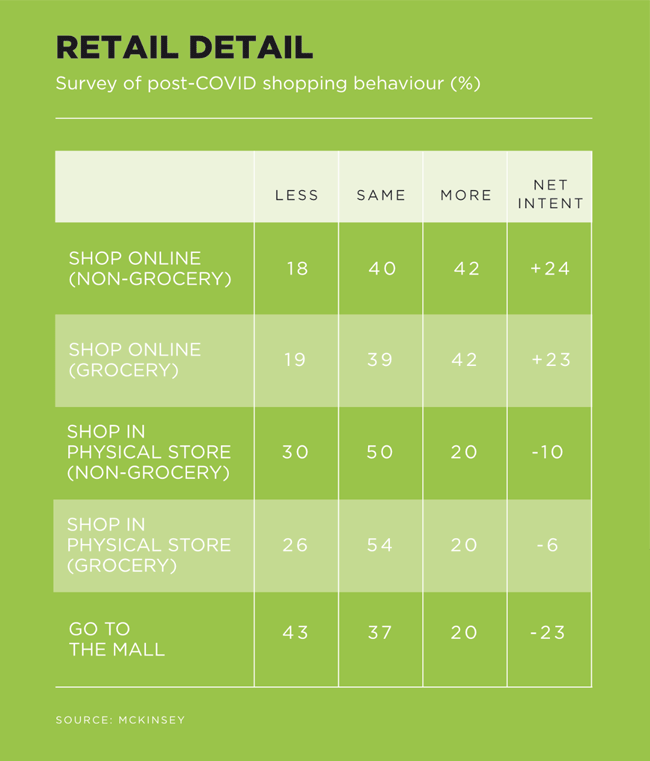 ‘COVID has done a lot of favours for e-commerce, and for technology in general,’ says Kernes, CEO of the Insaka eCommerce Academy and host of the podcast eCommerce Explained. ‘It has advanced everything by a couple of years. Even if I look at myself: my wife and I shop a lot online, but we never used to buy groceries online. We tried it a few years ago, but it was a nightmare: delivery was late, they didn’t have the right items… We tried it again during the COVID-19 lockdown, and now I can’t see us not doing our grocery shopping online.’

Kernes speaks for many connected South Africans, whose positive experiences with online shopping lockdown have caused a permanent shift in their buying habits. And it’s not just grocery purchases. ‘Another interesting example is dog parlours,’ says Kernes. ‘I used to put my dog in the car, drive him to a parlour a couple blocks away, drop him off, and he would sit in a cage for hours before I’d pick him up again. Now I get a mobile dog-grooming company to come to my house. They park in my driveway, give him his cut and they’re out of here – and it costs the same amount of money. Why wasn’t I doing it like this before?

The answer lies somewhere between a lack of trust in digital transactions, a lack of experience, and a lack of infrastructure – all of which were valid concerns. Even during the early stages of SA’s national lockdown, some Woolworths stores were offering delivery dates of two weeks after orders were placed. (That’ll be the ‘further improvements’ Woolies admitted to needing.) In a market where a rival such as Checkers was offering store-to-door deliveries within the hour, two weeks is an impossibly long time to wait for household essentials.

Those barriers will have to be overcome if SA e-commerce is to reach the levels of adoption we’re seeing in more developed countries. Even so, Aluwani Thenga, executive head of merchant services growth at FirstRand Bank, expects the value of e-commerce transactions in SA to surge by 150% to R225 billion by 2025 in response to this shift in consumer behaviour.

‘The pandemic has spurred consumers’ expectations that every business should offer the option to be able to digitally pay for everything, from hailing a ride to paying for groceries and takeaways,’ says Thenga, citing research by McKinsey Retail Practice that shows 10 years of e-commerce penetration growth in just three months this year in the US. ‘E-commerce penetration was 16% in 2019, but by April 2020 it had hit 33%,’ he says. ‘We may see a similar adoption trend in South Africa, but the rate of digital adoption is often curbed by the higher data costs and limited access to fibre technology across the country.’

Thenga believes that the SA businesses that will likely succeed in the new world of e-commerce will be those that have demonstrated an ability to seamlessly translate their bricks-and-mortar services to online. ‘These businesses should cater for as much choice for their customers as possible,’ he says. ‘This means providing for a customer experience that may commence on their website but ends in a payment made either online, in store or on delivery. 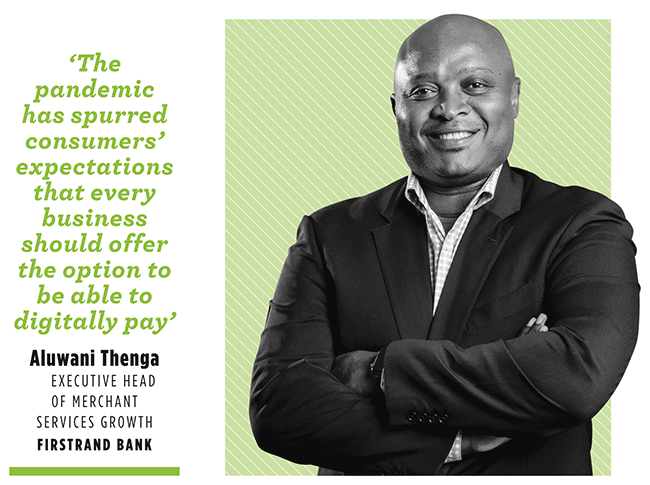 Essentially a good, interactive e-commerce experience is key and the less friction there is in the shopping experience the better for the business to drive customer satisfaction and loyalty. Ideally businesses must offer an opportunity for customers to test out a different combination of products or experiences that may otherwise be impractical in physical stores.’

Even then, e-commerce will only be part of the overall retail picture. ‘E-commerce will never over-run traditional retail,’ says Kernes, even as physical stores continue to close and online stores keep on springing up. ‘Omni-channel is the way forward. Businesses should be adopting both. You’re always going to need a shop, and a lot of products lend themselves to being tested out in a physical store.’ And despite all the statistics and forecasts, Kernes isn’t putting too much stock in the numbers just yet. ‘Predictions are all over the show,’ he says. ‘I saw a statistic saying that by 2040, 90% of all retail will happen online, which I don’t agree with. We’re not anywhere close to that. But even if it gets to 50%, that’s still enormous.’

In the meantime, Kernes – like many others – is looking forward to seeing how local businesses will reposition themselves to take advantage of the e-commerce revolution. ‘As e-commerce becomes more popular, competition will also increase at a rapid rate,’ he says. ‘Anybody who has started now will get onto the early-learning curve, building customer databases and figuring out how everything works. They’ll have an advantage over everybody else who starts later, when they finally get the wake-up call.’

Having said that, in the current retail environment, where even the biggest of brands are taking a hit, it’s hard to imagine anybody still sleeping on e-commerce.