The COVID-19 pandemic has rattled the global economy. But, while this disruption has been widespread and completely unprecedented, its impact has been somewhat muted in the transportation and logistics sectors. A host of economic research proves that while it is directly linked to economic growth (a 2018 dissertation by Nokuthula Selamolela finds a ‘directional causality relationship […] between economic growth and transport infrastructure’), a significant portion of the activity of JSE-listed transport companies would be defined as an essential service and has thus traded though the pandemic.

One of largest industrial transportation companies on the JSE by market value (R6.3 billion) as well as turnover (around R50 billion per year), Imperial Logistics, says it ‘is essential to the sourcing, warehousing, transportation and distribution of medication and other medical supplies, food, basic goods and other essential products and services in our markets of operation’. Until 2018, Imperial comprised a logistics business and a sprawling automotive group, Motus. The latter was unbundled to shareholders in a process initiated by former CEO Mark Lamberti.

Imperial says it is ‘ranked among the Top 30 global logistics providers’, with 27 000 employees in 32 countries. It has in-country operations in 12 countries, including SA, and its reach in sub-Saharan Africa, via a partnership network, is significant.

So far, the various restrictive measures enforced because of COVID-19 have had an impact across many of its operations. The group splits its activities into three segments: SA, Rest of Africa and International (the UK and Europe).

Operating profit for the six months to end-December was relatively evenly split across these segments, but 45% of revenue came from outside the continent (mainly as a consequence of the weaker rand), 30% from its home market and 25% from the rest of Africa.

In early April, Imperial stated that because it provides ‘an essential service of distributing consumer goods and healthcare [medication]’ in SA, ‘a significant part of this business remains in operation during the lockdown period. Approximately 55% of our revenue in this division is generated from the consumer, healthcare and other essential products and services sectors in South Africa’. This is a not-insignificant part of its domestic business.

Mohammed Akoojee, Imperial Group CEO, told the Sunday Times over Easter that the company is ‘executing on our commitments to our clients and our commitment to the country’. Not surprisingly, the busiest sector is healthcare. ‘Our warehousing and distribution business and our wholesale business in pharmaceuticals [is] very busy,’ he said. ‘Volumes are up’ in its business that services customers in the FMCG sector, such as Woolworths and Tiger Brands.

In a trading statement, the company notes that across Africa, ‘close to 100% of our revenue in this division is generated from the healthcare and consumer industries’. It adds that ‘most of the businesses in this division continue to operate at this time’, notwithstanding ‘some concerns relating to the supply and the delivery of products in certain markets’.

The situation in Europe is markedly different, however, given that 36% of revenue is generated from the automotive industry. All original equipment manufacturers, such as Volkswagen, Daimler, BMW and Ford, have implemented plant shutdowns. Imperial has a sizeable chemical logistics business on that continent too (31% of revenue in Europe), and it says that volumes ‘remain resilient’.

The group says that the ‘core strategic focus of Imperial is to grow our African business and align our international portfolio to position the group as the “Gateway to Africa” in the medium term. An integrated logistics and market-access offering focused on Africa leverages our powerful competitive advantages and capabilities, which will be concentrated mainly on the healthcare, consumer, chemicals, industrial and automotive industry verticals’. To get there, it is growing in Africa and ‘aligning its international portfolio with [its] core competitive advantage, being Africa’. It has announced the disposal of its international shipping business.

Rival Super Group (market value of R5.8 billion) operates across more sectors than just supply chain. It has two sizeable dealerships businesses (in SA and the UK) as well as two fleet units (one locally and   a majority stake in SG Fleet, which is listed in Australia). But, in the six months to end-December, 41% of revenue and 40% of profits came from its African and European supply-chain businesses. This is higher than the year prior. 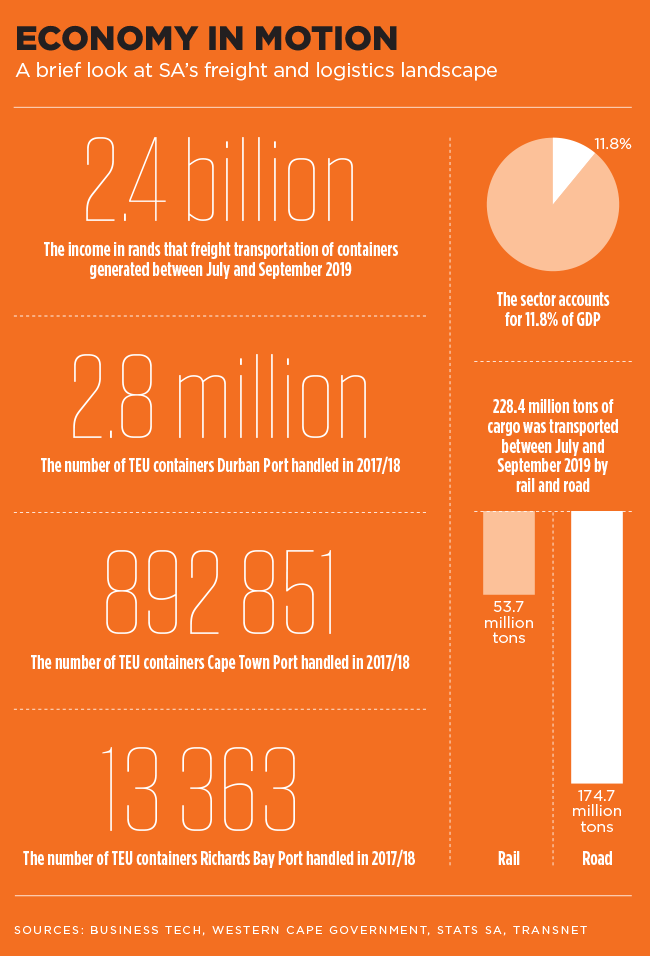 In early April, Super Group said that while all its vehicle dealerships in SA and the UK had been closed, much of its supply-chain business remained operational. It says that ‘approximately 58% of Supply Chain Africa’s revenue is generated from the logistics of consumer goods, paper and pulp, packaging products, healthcare products and commodity products, primarily coal, which are classified as essential products in South Africa. The consumer and convenience businesses have been negatively affected to varying degrees, most notably the businesses exposed to the quick services restaurant sector [which were shut in late March]’.

It adds that its industrial-facing businesses have been significantly impacted by the lockdown and are ‘only supplying products to sectors providing essential goods’. In addition, ‘the initial closure of South Africa’s borders to neighbouring countries has caused a large degree of disruption to our African Logistics business, which accounts for approximately 3% of group revenue’.

The majority of its supply-chain revenue in Europe comes from inTime, a ‘time-critical and integrated supply-chain management solutions company in Europe’, which it bought in 2015. Super Group says the Germany-headquartered unit ‘is operating at approximately 25% of usual volumes’.

Grindrod, originally a business focused on shipping, unbundled its shipping unit in 2018. The remaining business (with a market value of R2.6 billion) operates in 20 countries across three units – ports and terminals, logistics and banking (it runs a niche bank) – and reported revenue of R3.9 billion in 2019. The first of these units holds a 24.7% stake in Maputo Port and owns and operates terminals at that port as well as at Matola, Richards Bay and Walvis Bay. The logistics business generates the bulk of the group’s revenue, which stands at R2.77 billion, and operating profit, at R323 million. 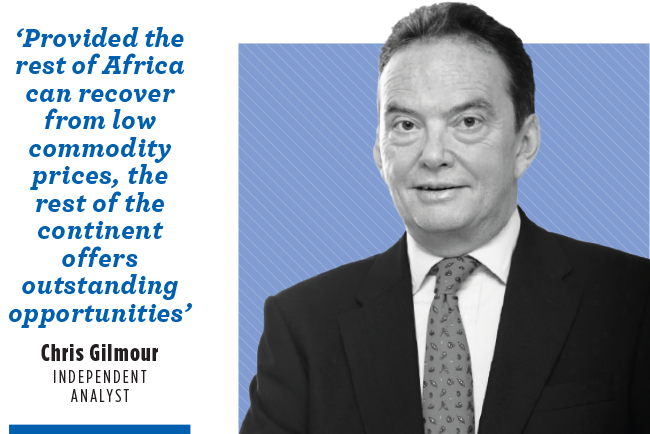 According to a recent company statement, ‘the first quarter of 2020 across the majority of the group’s businesses was strong with little impact on shipments of commodities to China and only marginal impact in the container business on inbound shipments from the East’. However, the ‘lockdown in South Africa impacts most of the businesses in South Africa and in Maputo as trade flows either cease or are severely restricted’.

It says the closure of the border with Mozambique has impacted its port and terminals businesses. Its container businesses are ‘assisting with essential cargoes. Container berths across the South African ports have been significantly reduced and therefore the businesses are operating well below optimal levels’.

Its spun-off shipping unit has a far more modest market value (R822 million) and is listed on the Nasdaq and JSE. This dual-listing was critical as management believed the local market undervalued the shipping business, given the lack of peers (and relative liquidity). Grindrod Shipping reported revenue of $331 million in 2019 and operates in the drybulk and tanker segments. Earlier this year, it noted that ‘the current market environment presents unique near-term challenges as the result of the coronavirus, which has disrupted demand and trading patterns for both the drybulk and product tanker markets and has shown the high degree of interdependence of all regions and industries in this era of globalisation’.

Trencor, with a market value of R1.58 billion, used to hold a 47.5% stake in NYSE-listed Textainer, one of the world’s largest marine cargo-container lessors. In December 2019, Trencor unbundled most of this holding to shareholders, which saw Textainer listing on the JSE (as a secondary listing). Textainer has a market value of R9 billion. The majority of Trencor’s remaining assets comprise cash. 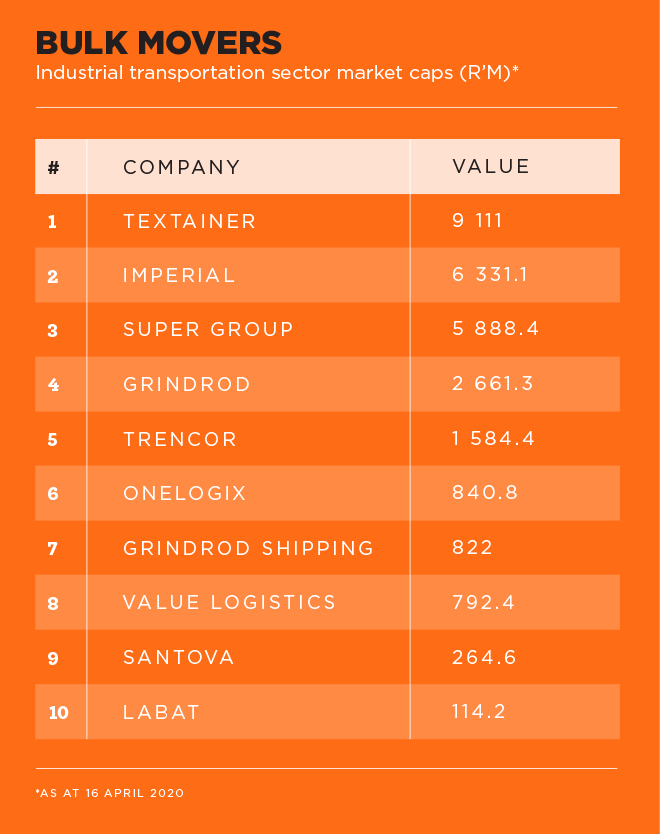 The smaller OneLogix and Value Logistics are more ‘straightforward’ logistics businesses. Both have been in operation for a number of decades, they have similar market values (R840 million and R792 million respectively), and both generate just under R3 billion in annual revenue.

The former, however, operates in more specialised segments. Its ‘abnormal logistics’ division contributes nearly 50% of group turnover and is focused on transporting and delivering vehicles (cars, trucks and agricultural equipment) to dealerships across Southern Africa. Primary product logistics, approximately the other half of revenue, operates in the (bulk) tanker, general freight and refrigerated areas of the market. Aside from SA and neighbouring nations, OneLogix’s footprint extends to Angola, Zambia, Malawi and Tanzania.

Value Logistics is active in the general distribution, truck rental and retail logistics segments of the market. It has more than 4 000 vehicles operating mainly in SA.

According to independent analyst Chris Gilmour, there are ‘major’ cross-border and rest-of-Africa opportunities for all logistics players. ‘OneLogix is a great example of this, especially in its vehicle delivery business. Provided the rest of Africa can recover from low commodity prices, the rest of the continent offers outstanding opportunities’. But he cautions that the mine shutdowns and border closures as a result of the COVID-19 pandemic are obviously not helping in the short term.

Santova, a specialised trade-solutions business with a market value of R265 million, operates across the logistics value chain. It has 20 offices in eight countries, with a significant presence in Hong Kong, the UK, Germany and the Netherlands. Simply put, it provides end-to-end supply-chain solutions for clients, such as global sourcing for retailers. On R4.2 billion in gross billings, the company reported revenue of R342 million in the 2019 financial year.

Labat is the smallest company in the sector, in terms of market cap – R114.2 million. Founded in 1995 and listed in 1999, it has a diverse portfolio – Labat’s holding traverses energy, IT and logistics. The latter includes a bulk fleet solutions division (which ‘comprises its own fleet of vehicles, and operates through the use of sub-contractors and the establishment of joint venture partnerships, with companies that dedicate their fleets for Labat’s operational use’) as well as a logistics brokerage services division.

The company has also recently branched out into the cannabis sector. ‘Labat’s vision is to be the leading cannabis enterprise in South Africa,’ as the company puts it.

Gilmour says that ‘longer term, there would appear to be scope for improvement for local logistics companies to take advantage of a greater appetite for home delivery, of all manner of things. This could be a game changer for certain companies, provided lockdowns become a semi-permanent feature this year. This could fundamentally change the way we live.

‘While the sector has seen a fair amount of consolidation, especially as these larger companies buy family-owned businesses, this still has some way to go. It is a very fragmented industry with huge scope for further profound consolidation.’