The Witwatersrand basin remains one of the largest resources of gold in the world, but much of the metal is now at depths that cannot easily or cost-effectively be mined. Production in the country has declined annually since 2008 (according to World Gold Council data) and SA is now only the eighth-largest producer of the metal globally (and not even the largest in Africa). The sector, however, still employs 95 000 people, according to the Minerals Council South Africa. On the JSE, gold mining’s dominance may have faded over time, but it remains interwoven with the country’s economy and history. The exchange was founded in 1887 – during the first gold rush – and many companies operating in the sector trace their origins to the granddaddy, Anglo American, itself. Today, seven companies are listed in the sector: AngloGold Ashanti, DRDGOLD, Gold Fields, Harmony Gold Mining Company, Orion Minerals, Pan African Resources and Randgold & Exploration. A notable exception is Sibanye-Stillwater – which started as a gold producer when Gold Fields unbundled its local mines – but has since entered the platinum sector in the US and locally. The sector’s total market cap is in excess of R320 billion.

Schalk Louw, wealth manager at PSG Old Oak, says that ‘investors often buy gold or stocks in gold mines as an anti-inflation measure. Many market commentators believe that gold will always have value since it is a sought-after metal’. In addition, he says ‘investing in JSE-listed gold miners can offer investors a hedging opportunity by giving exposure to the materials sector. Since most of JSE-listed gold miners generate revenue in US dollars, it may afford investors protection against adverse rand movements’. 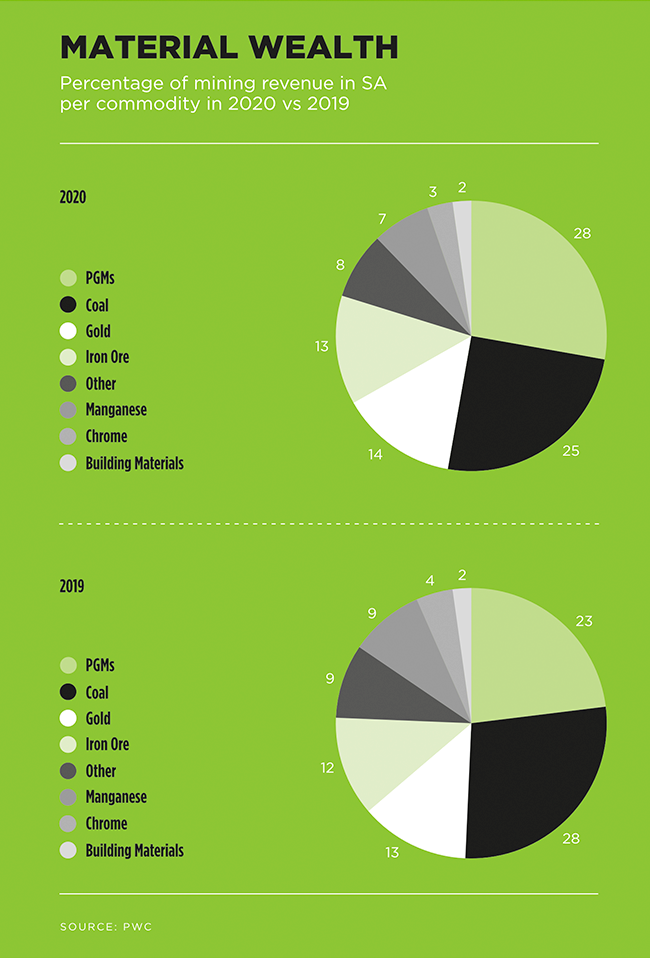 Wickus Botha, EY Africa energy and natural resources leader, says ‘most of the JSE-listed gold miners have done really well to diversify their portfolios – product, portfolio, geography, operations – and de-risk their business models and balance sheets. In addition to the stronger commodity prices, they have responded well to the current COVID-19 pandemic, have stable operations and cost structures, which have resulted in strong cash-flow generation. Most of the gold miners have also prioritised dividend distribution, in response to stronger cash-flow generation and good financial discipline. Lastly, ESG [environmental, social and corporate governance] continues to grow in prominence and importance, and the gold miners are prioritising their strategies to address this, which is being well received by the investor community’.

AngloGold Ashanti accounts for more than 40% of this sector’s total market cap and is valued at R145.5 billion. Its origin is the formation of AngloGold in 1998, when Anglo American consolidated its gold and uranium assets. In 1998, it became the first SA company to list on the New York Stock Exchange. In 2004, AngloGold Ashanti was formed by the merger of AngloGold and Ashanti Goldfields (with mines in Ghana). Anglo American began selling down its stake in AngloGold Ashanti in 2006 and in 2009 sold its remaining interest. The company has 12 operations in eight countries (Argentina, Australia, Brazil, Ghana, Guinea, Mali, the DRC and Tanzania). It sold its last SA asset, Mponeng, to Harmony in 2020. This is the deepest mine in the world, and operations extend approximately 4 km below surface. It has begun the process of selling its operations in Mali too. AngloGold Ashanti is on track to produce between 3 million and 3.1 million oz of gold in 2020. Excluding the sold assets, more than half the gold it produces is from its mines in Africa. Gold Fields was formed in London in 1887 and at one point was rated the most valuable company in the world after receiving a £250 000 investment from Cecil John Rhodes and Charles Rudd. In 2013, it unbundled its local assets into Sibanye Gold. Its market value stands at around R123.7 billion today. It has nine mines in four countries (Ghana, Australia, SA and Peru), with its sole remaining asset locally being the mechanised South Deep mine (previously known as Western Areas). It plans to construct a new mine at Salares Norte in Chile after a feasibility study was approved by the board in early 2020.

Gold Fields produces around 2.2 million oz a year and was on track to meet this target despite COVID-19-related disruptions. Notably, CEO Nick Holland (who is set to retire in this year) led the global sector in implementing ‘more reflective cost measures after setting out an honest analysis of the adverse state of the industry’ during a presentation to the Melbourne Mining Club in 2012. 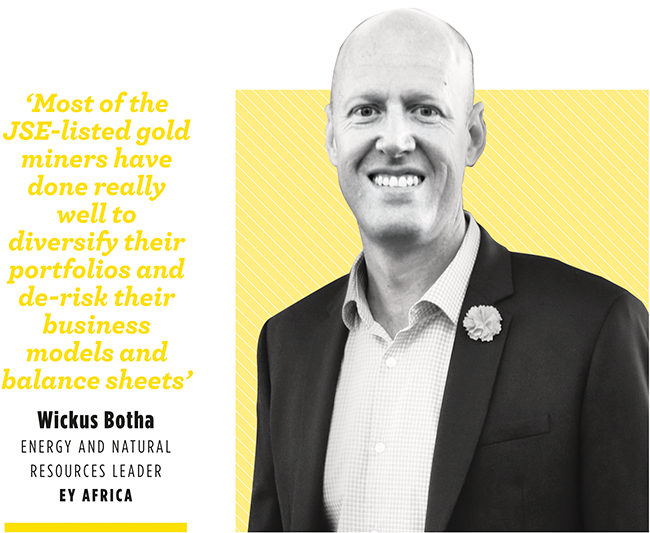 Harmony Gold, which attempted a hostile takeover of Gold Fields in 2004, was formed in 1950 and listed on the JSE a year later. It was originally formed to operate a single mine (Harmony) and was managed by Randgold & Exploration. In the mid-1990s, following the wind-up of what was then Randgold, Harmony became an independent entity. Today, it has a market cap of R41.7 billion and 18 operations in SA and Papua New Guinea. Hidden Valley is Harmony’s only operating mine in Papua New Guinea, with the sizeable but stalled Wafi-Golpu project being a joint venture with Australia’s Newcrest Mining. Around 90% of the gold Harmony produces is from its local underground and surface operations. This number will increase following the acquisition of Mponeng and Mine Waste Solutions in late 2020. Currently it produces between 1.26 million and 1.3 million oz a year, but this guidance will be updated in the early part of 2021 once the acquired assets are integrated.

The majority of deep-level gold mines in SA are owned by Harmony and Sibanye-Stillwater, as the need to drive efficiency and shared operations through the merger of nearby shafts continues. DRDGOLD (formerly Durban Roodepoort Deep, which was originally established in the late-1800s gold rush) differs from its peers in that it is a surface producer only. It has a market value of R13.98 billion, and describes itself as ‘a world leader in the recovery of gold from the retreatment of surface tailings’. Its main plant, Ergo, is about 50 km east of Johannes-burg, near Brakpan. It ‘re-established’ Ergo in 2007, following the plant’s closure two years prior by then-owner AngloGold Ashanti. Anglo American first commissioned the plant in the late-70s. Together with its Knights plant  in Germiston, the assets span an area of about 60 km across and 25 km from north to south and are ‘arguably the world’s largest gold surface tailings retreatment facility’. It has operated other plants around Johannesburg, including one at Crown Mines, and shuts these once tailings are exhausted. In the year to end-June 2020, it produced 174 000 oz of gold at an all-in cost of $1 075/oz, making it one of the lowest-cost producers in SA. It anticipates production in a similar range this year.

Pan African Resources is a mid-tier gold producer, which produces a similar amount of gold per year to DRD. It has two underground mines and two surface treatment plants. In excess of half the gold it produces comes from the Barberton mine complex, which has been operating for more than a century and whose Sheba operation is one of the oldest and richest working mines in the world. The company, which is listed on both the JSE and London’s AIM, has a market value of around R11 billion. It produced in excess of 179 000 oz in the year to end-June and expects production of 190 000 oz this financial year. Far smaller Orion Minerals, with a market cap of R1 billion, does not have any operating gold assets. The Australian company listed on the JSE Main Board in 2017 and is a ‘globally diversified metal explorer and developer’. It is developing its flagship Prieska copper-zinc project in the Northern Cape. 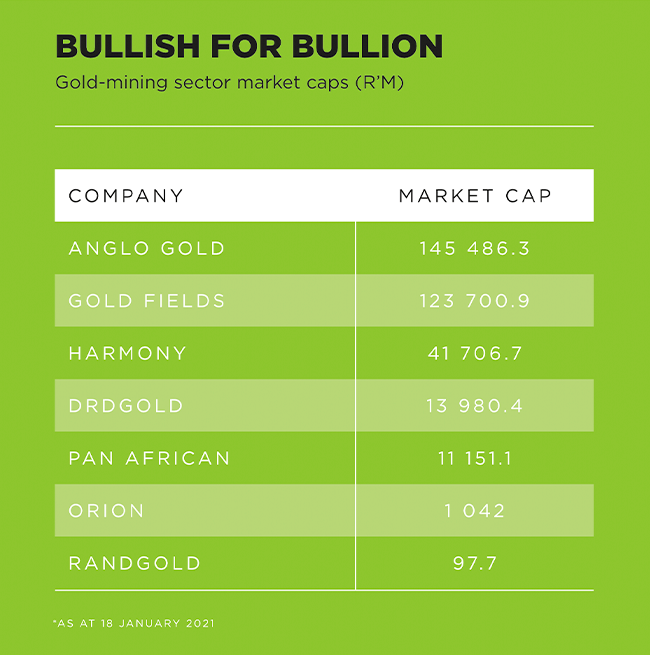 Randgold & Exploration, one of the companies intertwined in the Brett Kebble saga, remains listed but has no operating assets. It is pursuing a number of legal claims, launched more than a decade ago, to recover what it alleges are ‘misappropriated assets’. Kebble allegedly stole more than R1 billion in Randgold & Exploration shares. Its only asset is effectively cash, with R132 million on the balance sheet. The performance of gold miners is inextricably linked to the price of the metal. An improved gold price in 2020 – it remained well above $1 500/oz for most of the year and peaked at more than $2 000/oz – helped all producers. The outlook remains positive. PSG’s Louw says that ‘as a result of the COVID-19 pandemic, many governments have implemented stimulus packages. The US has seen extensive stimulus to support the economy during the pandemic. As the money supply increased, the dollar weakened, and the gold price rose. Another one of the most apparent factors influencing gold’s price during 2020 and the COVID-19 pandemic was US [interest rate] yields. As real yields declined, many investors moved to gold, which increased the price of gold’.

He adds that the fact the metal is considered to be a hedge against inflation is positive, as ‘widespread fiscal stimulus and ballooning government debt are raising concerns on long-term inflation, which could support the gold price as we head into 2021. A lower interest-rate environment could underpin the gold price as it decreases the opportunity cost of holding non-yielding bullion’.

EY’s Botha notes that the gold price is notoriously difficult to forecast. ‘Several analysts anticipate that gold prices will at least maintain current pricing levels and perhaps even strengthen in US dollar terms,’ he says. ‘Since the current gold price is supported by global volatility and uncertainty, it is difficult to model and anticipate, because it would depend on how swiftly recovery, stability and reduced uncertainty settles. ‘Having said this, it is likely that it will take time and as such, the most likely scenario is probably continued gold price support.’