It was Marc Andreessen who memorably coined the phrase ‘software is eating the world’. This was a central thesis in a 2011 Wall Street Journal essay penned by the co-founder of the Mozilla web browser, now a partner at venture capital firm Andreessen Horowitz. In the piece, he states that ‘we are in the middle of a dramatic and broad technological and economic shift in which software companies are poised to take over large swathes of the economy’.

For corporates, this continues to be the case as an ever-greater percentage of expenses are invested in technology and software. For large local banks, as an example, this spending could be as much as a quarter of costs. Gartner expects worldwide IT spending to total $4.2 trillion this year, 8.6% higher than last year. Major drivers of this growth are enterprise software and devices, as well as IT and communications services.

Irnest Kaplan, MD of Kaplan Equity Analysts agrees that ‘technology is becoming ever more important and, overall, the sector has and will continue to benefit from this move’. He adds that, broadly speaking, the structural shift accelerated by the COVID-19 pandemic is positive, but that there are some caveats. First, not all companies in the sector will benefit equally as some are more exposed to specific types of products and solutions than others. Second, he points out that the shift to cloud providers may end up being slightly negative for local software providers and systems integrators. As more and more projects and solutions are deployed through Amazon Web Services, Microsoft Azure, Google Cloud or a specialist cloud platform, the local outfit will still implement the solution but it may miss out on the margins they would have earned historically on software resale or implementing hosting infrastructure. 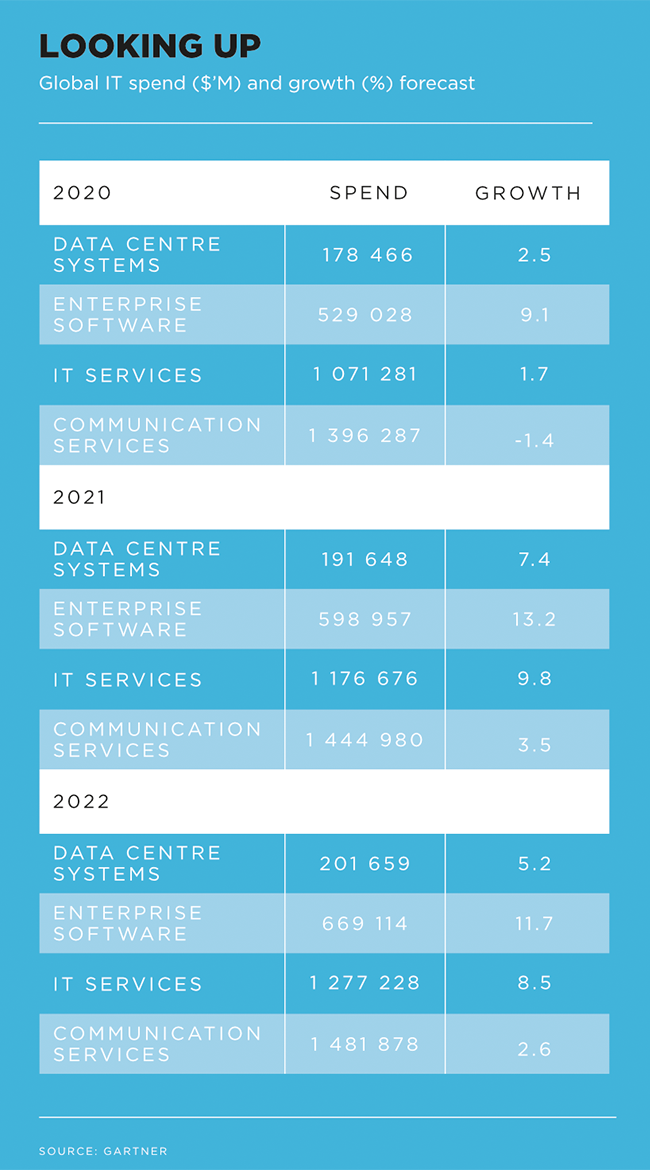 The software and computer services sub-sector on the JSE is one way in which investors can have exposure to this industry. Datatec, the largest company by market value – and the second-oldest – was founded in 1986. It listed in 1994 and raised R9 million. Founder and chief architect Jens Montanana is still CEO today and remains a significant shareholder, with 12.9% of the group. It has a market value of about R7.5 billion, but Montanana says this valuation today is ‘the opposite’ of the dot-com bubble of two decades ago. At that point technology stocks, both on the JSE and globally, were massively overvalued. In August, it announced that it had engaged Lazard to ‘assist with a comprehensive evaluation of strategic options and initiatives to unlock and maximise shareholder value’. This review, it says, seeks ‘to address the persistent gap between Datatec’s valuation and the inherent value of its underlying assets, while also ensuring that the group is positioned to take full advantage of the positive market dynamics for its technology solutions and services’.

The announcement of this review has seen a welcome response from investors, with the market value of the group increasing from approximately R5 billion to R7.5 billion. Datatec’s valuation gap was also highlighted by Delphine Govender of Perpetua Asset Management in a webinar hosted by the JSE in early August. She said that Datatec ‘used to be a poster child of the market. Everyone spoke about it in the late nineties. Today, no one speaks about it’. Govender contrasted its market value at that time (around R5 billion) with the group’s annual revenue of $4 billion (approximately R60 billion).

Datatec operates in more than 50 markets across the globe, with Europe comprising the major part of its revenues and profits. Its two major divisions are Logicalis Group (historically about 40% of group revenue), which is focused on ICT solutions and services; and Westcon International (about 60% of revenue). The latter is a large global technology distributor that goes to market under Westcon-Comstor. In 2017, Datatec sold the North American part of this business to Synnex. Its new management consulting unit, Analysys Mason, meanwhile, has modest revenues in the context of the broader group, but sales grew 25% between 2020 and 2021. 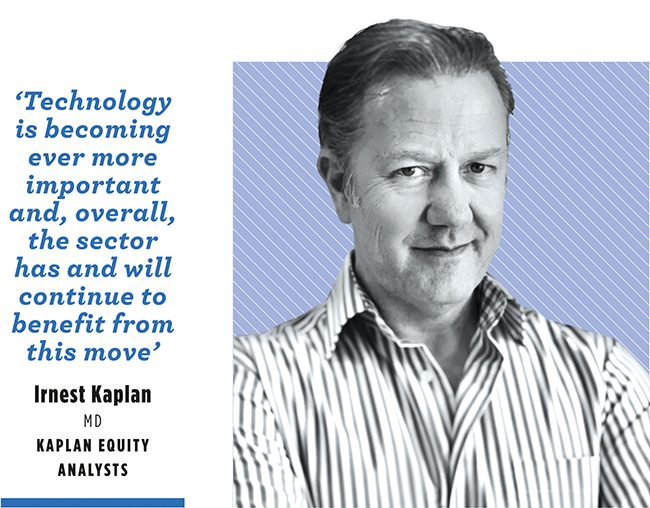 According to Datatec, ‘trend towards digitalisation is set to continue and the structural shift away from many forms of traditional hardware to increasing software and services with growing annuity revenue is already benefiting our divisions as they provide many of the products and services required to support a remote IT networked-based way of doing business’. The company adds that the trends experienced during the last year have continued into the current financial year. MiX Telematics, by contrast, provides fleet-management solutions across 120 countries, with eight core markets, including SA, the UK, the US, Brazil and Australia. The business was founded as Matrix Vehicle Tracking in 1996 and was unbundled from then-listed Control Instruments in 2007. Today, its market cap is around R4.6 billion, and it says it’s one of only a few providers with this global reach and counts global entities such as DHL, Praxair, Schlumberger and Halliburton as customers. MiX Telematics says its penetration in the so-called ‘premium fleet space’ of 215 million vehicles is around 17% and that this accounts for nearly two-thirds of its subscription revenue. This as a portion of its total revenue is just under the 90% mark.

Subscription revenue for the year ending March 2021 was $113 million, with the group reporting operating income of $18 million. Despite its strong push to internationalise the business over the past decade, nearly half its subscription revenues ($62 million) are still derived from its African operations.

A number of companies listed in the sector compete in the space as more traditional technology service providers. These include Altron, AYO, EOH and Adapt IT.

Altron, which has its roots as industrial conglomerate Allied Electronics Corporation, is a far different group in 2021 than even five years ago. CEO Mteto Nyati has slimmed and focused the group into one spanning three segments, namely digital transformation, managed services, and what it terms ‘own platforms’. When he arrived, following a transaction that saw the Venter family reduce their historical stake from a controlling interest, the key was to get out of its non-core businesses. Altron had a long list of these, including transformer and set-top manufacturers. Nyati says these typically had one or two customers. Ironically, the COVID-19 pandemic forced its hand and the group made the call to dispose of a further three businesses – a decision that Nyati says it always knew it had to take. These included the Xerox businesses and a business-process outsourcing unit that never really fitted comfortably.

His main strategy after simplifying the group was to sell more to its existing customers, termed ‘one Altron’. This set a goal of doubling earnings (ebitda) in five years. Management managed to deliver this in three. In the 2021 financial year, heavily impacted by COVID, it reported stable revenue of R7.4 billion from its remaining operations, with earnings slightly lower. Altron unbundled its UK Bytes business last year, which managed to unlock a sizeable amount of value for shareholders. The combined market cap of Altron and Bytes Technology Group Plc stood at R24.4 billion on 28 February. The latter retains a secondary listing on the JSE. 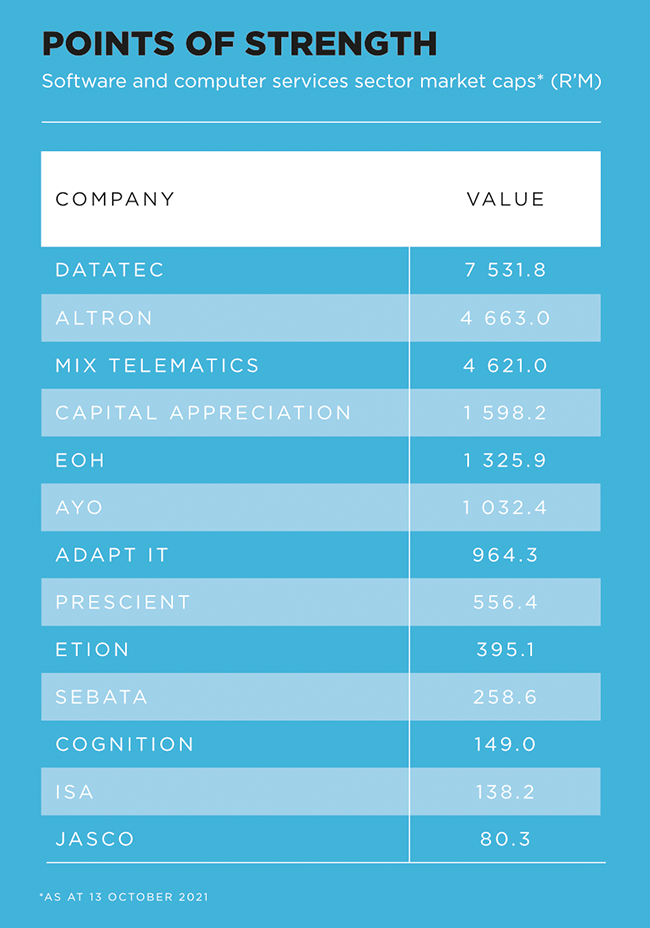 EOH continues its restructuring and de-leveraging process since Stephen van Coller took over as CEO in 2018. It reported ‘base revenue’ (excluding subsequent disposals) of R4 billion in the six months to January, with the bulk from its iOCO systems-integrator division. The business originated as the outsourced IT division of PG Bison.

Adapt IT shares a similar origin story to EOH. The original entity, Infowave, began as an IT service provider to a major sugar producer in KwaZulu-Natal. Listed Infowave then merged with Adapt IT in 2007, a business it had actually provided with seed funding and support.

Canadian software group Volaris launched a bid for the group in April this year. Adapt IT reported a 1% increase in revenue for the year to end-June to R1.5 billion. Three of its largest divisions when measured by revenue – financial services, education and manufacturing – all grew sales in the year.

AYO Technology Solutions, with interests in business across the technology sector, derives most of its revenue from its managed-services division, which includes SGT. In the six months to end-February, it contributed more than R532 million of its R859 million in revenue.

Capital Appreciation, with a market value of R1.59 billion, is unique in this sector in that it listed on the JSE as a special purpose acquisition company in 2015. This type of ‘blank-cheque’ company is increasingly popular and allows a company to raise capital via a stock exchange listing before actually owning any operating businesses (or assets). In May 2017, it acquired three assets in the payments and software as well as services spaces. Payments comprise nearly two-thirds of the group’s R619.5 million annual revenue. According to the group, ‘digital transformation, electronic payments and related advances continue to accelerate’.

Several smaller companies are also listed in the sector. PBT Group provides data and analytics solutions to customers. Founded as Prescient Business Technologies in 1998, it listed on the JSE in 2010 through a reverse listing. Its market value stands at around R556 million, with reported revenue of R789 million in the last financial year.

Sebata Holdings, which changed its name from MICROmega in 2018, is also undergoing a restructuring. Historically, it owned sizeable businesses that provided software services to municipalities. It disposed of these to Inzalo last year to address the challenge faced regarding empowerment status. Etion is a technology investment holding company, with operations in the technology design and connectivity spaces. It sold one of its three large divisions, Lawtrust (which is focused on identity and cybersecurity), to Altron earlier this year for R245 million. Cognition, of which Foneworx is a subsidiary, provides legacy unified messaging services (think Idols premium SMS voting lines) and has stakes in a number of other assets. It is majority-owned by Caxton, which engineered the purchase of a 50% stake of portal Private Property in 2018. At that stage, Caxton saw Cognition as a vehicle to house its digital assets, but this has not fully transpired. ISA (Information Security Architects) is a specialist managed security-services provider, with revenues (pre-COVID) of around R100 million a year. Jasco Electronics, which reported revenue of R351,3 million for the six months to end-December 2020, also restructured during the year.

It is clear from the past 18 months that while overall revenues in this segment were under some pressure, demand for digital transformation services has increased substantially. This is evident from financial results in the sector, particularly from those companies that operate in the traditional-systems integrator space. According to John-David Lovelock, VP of research at Gartner, ‘digital transformation can no longer be purchased overnight, and global IT spending projections reflect that. As the world continues to open back up, enterprises will invest in tools that support innovation, anywhere operations, and employee productivity and trust’.