According to economic theory, the biggest ticket retailers, such as car dealerships and home decor purveyors are always the first to feel the pain. This is because their generally upper-end customers are the most exposed to rising interest rates. This vulnerability, which may appear counter-intuitive, is on account of the high debt to income ratios that come with home mortgages and car loans.

As a combination of rising interest rates and growing unemployment in 2016 has put pressure on all market segments, double-digit price increases for imported durable goods are also under way as retailers seek to recover margins after the rand weakened from December 2015.

Given these indicators, one of the standout retail performances has been from upscale bath, basin and tile seller Italtile. While the JSE specialty board includes retailers of durable and semi-durable goods (such as clothing), the focus here is primarily on the durable market. This includes the home improvement and automotive chains, among others.

Italtile management ascribes its double-digit rise in profitability to a slick retail performance, from procurement through to sales at both the high-end Italtile chain and middle-market CTM offering. In the year to June 2016, profit attributable to shareholders was up 16% to R813 million. But it wasn’t only higher profits that the group managed to squeeze out, an aspect all retailers focus on when sales are hard to come by. The top line, which grew at 14%, was also robust – this as it took market share from smaller rivals who are bearing the brunt of the downturn.

‘Currency volatility and cash flow constraints led to further rationalisation of less-established operators,’ according to the group.

It’s hard to pin down what precise combination of brand, product and price pulls in the spenders when others are faltering but it’s safe to say Italtile got it right in financial 2016. The company says it had a renewed focus, which included making the right fashion calls on tiles and better training of sales staff. Italtile also improved stock availability, minimising the retailer’s ‘cardinal sin’ – being out of stock.

Italtile’s good performance hardly means it is immune to difficult conditions. Retailers in a purple patch are frequently simply the last to get hit. But Italtile is confident the good times aren’t over yet. Investors will also take comfort in its strong balance sheet.

On a strategic front, Italtile has made a major push to vertically integrate its supply chain by buying out associate company Ceramic Industries (a tile and bath maker), of which Italtile already owns 20%. However, the Competition Commission has recommended the merger be stopped. Italtile is appealing.

Somewhat less surprising has been the strong performance of no-frills hardware retailer Cashbuild. While its mass market is less affluent than Italtile’s, it’s also less vulnerable to higher interest rates. It focuses on the basic materials used for home building and improving. Indeed, the results at higher-end DIY chain Builders Warehouse bore this segmental difference out. Massmart, owner of Builders Warehouse, says consumer confidence at Builders had been affected in the six months to June 2016.

In the year to June, Cashbuild revenue climbed 13% to R8.67 billion, which included a boost from the acquisition of Limpopo chain P&L Hardware. Cashbuild profit attributable to shareholders rose even more, up 23% to R437 million after the group expanded the gross margin. Profit would have been materially higher had it not been for a once-off black empowerment deal cost of R62 million. 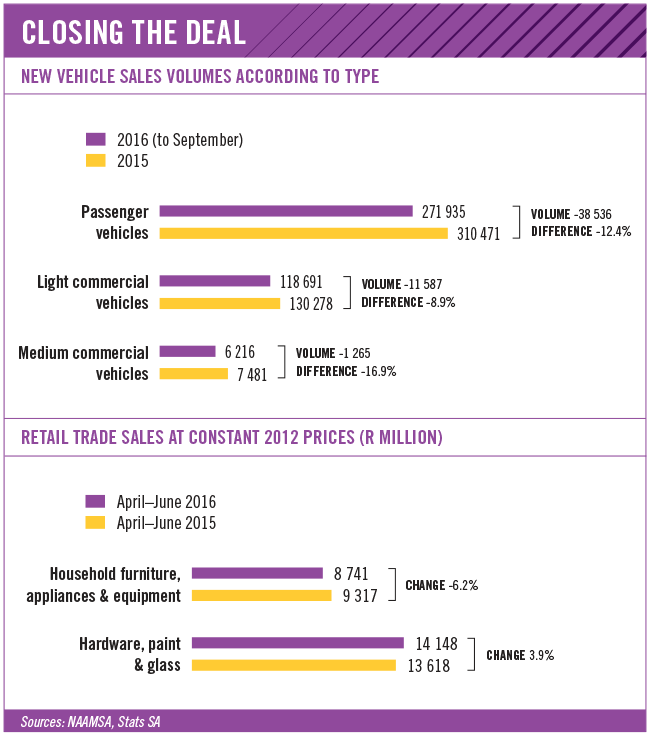 Still, a severe cyclical downturn does catch up with blue-collar workers as employers reconsider staff expenses and begin retrenching. According to Stats SA, the unemployment rate reached a 10-year high of 26.7% in the first quarter of 2016, with no meaningful improvement in the second quarter.

While the unemployment rate has stubbornly hovered around 25% since 2010, a move close to the 30% benchmark will have a devastating impact on retail sales to all income groups. However, in the six weeks since June, sales growth at Cashbuild had not slowed, the group reported.

Cashbuild’s customer base, which includes the rural and urban poor, benefits indirectly from government’s social security grants that inject R129 billion a year into communities. However, the sustainability of government spending is being questioned by the credit ratings agencies, given low economic growth. This underscores the political risk facing corporate SA, in addition to the cyclical business risk since the 2013 commodities downturn.

Meanwhile, small-cap steel products retailer Alert Steel Holdings is under business rescue with an application for it to be liquidated. The steel construction category has been hard hit by a shift away from new builds to renovation.

According to analysts, total retail sales held up surprisingly well in calendar 2015, despite facing many of the same headwinds as in 2016. But in the second quarter of 2016 all that changed, according to the EY/Bureau for Economic Research (BER) Retail Survey. Business confidence among retailers plunged to a 15-year low. In other words, more pessimistic than during the depths of the 2008/09 global financial crisis. Durable goods, such as hardware and furniture, were particularly hard hit.

‘Durable goods typically have a high import content and a greater sensitivity to changes in debt financing costs and consumer confidence levels. It was therefore to be expected that the dramatic depreciation in the rand exchange rate, rising interest rates and low consumer confidence levels would translate into weaker durable goods sales volumes,’ says EY consumer products and retail sector head Derek Engelbrecht. He adds that ‘the DIY boom that started in 2014 now seems to be fading’.

Motor dealership owner Combined Motor Holdings (CMH) says it too had been able to trade ahead of the national market in new car sales in the year to February. However, it did not do so comfortably, with unit sales flat compared to the previous year. 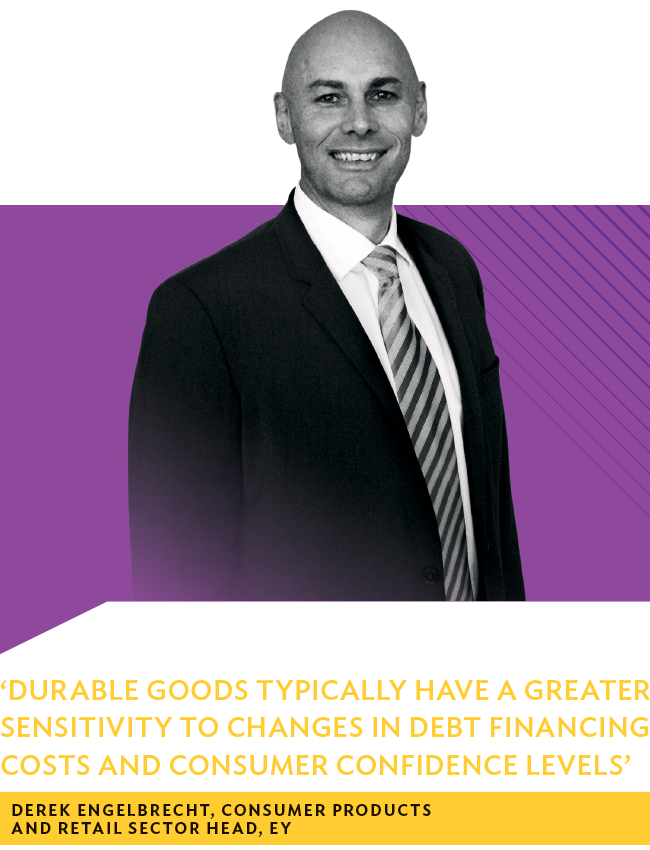 ‘The group learnt harsh lessons during the global and local recession of 2009: most importantly the need to manage costs and cash flow in a shrinking market,’ according to CMH CEO Jebb McIntosh. Evidence of these ‘lessons learnt’ was CMH’s decision to close two big dealerships. In the year to February 2016, profit attributable to shareholders was up 20% to R183 million.

Despite some resilient company-specific car sales performances in the first half of calendar 2016, Nico Vermeulen – director of the National Association of Automobile Manufacturers of South Africa (NAAMSA) – is not optimistic about the industry’s short-term prospects. ‘Double-digit new vehicle price increases in response to earlier rand weakness and the possibility of further interest rate hikes would combine to further pressurise consumers and businesses at a time of rising retrenchments across a number of sectors,’ he says. ‘Above-inflation new vehicle price increases, estimated between 12% and 15% plus for the year, will put further downward pressure on sales of new motor vehicles.’

NAAMSA reported a nationwide decline of 5.6% in new vehicle sales. The association has not made specific forecasts for 2017 but apart from the stronger than expected recovery in SA’s economic growth in the second quarter of 2016, there are few signs of a rebound next year.

The association added that the consumer confidence required to drive spending on new vehicles is low and that stable political leadership is required to reassure consumers and businesses.

‘NAAMSA believed the public and private sectors had a responsibility to calm current tensions in South Africa and to restore confidence through renewed commitment to sound macro-economic policy, continued fiscal discipline and stability,’ the industry body says.

Meanwhile, the business model of furniture retailers, which earn most of their money providing consumer loans in order to sell beds and fridges, has encountered twin challenges. Not only have they faced regulatory issues over ethics in consumer finance, but they have also encountered a threat from banks providing unsecured loans.

Lewis is now the only listed ‘pure play’ furniture seller remaining. However, the downscaling of the sector – including the collapse of the Ellerines chain – presents an opportunity for Lewis, according to its CEO Johan Enslin.

‘Luckily, in the furniture retail industry we’ve got a small economy within the bigger economy, and the demise of Ellerines actually offers a lot of potential market share gains in the short and medium term,’ he says.

Moreover, the bankruptcy of Ellerine Holdings has given Lewis a chance to add a higher income customer profile to its mass-market business without a significant outlay. This after Lewis bought the middle-market Beares brand, including stores in the rest of Africa, from Ellerine Holdings in early 2016.

‘Medium to longer term margin support could stem from synergies from Beares and the enlarged Africa portfolio once the assets are fully bedded down,’ GCR said in September.

The agency re-affirmed both Lewis’ long-term and short-term ratings with a stable outlook. The long-term rating is A(za) and short-term is A1(za). However, the credit ratings agency said prospects for the near-term were more challenging than for the medium-to-long-term. ‘While competitive pressures have eased, the weak economic outlook and tighter regulations on credit sales will continue to weigh on short term prospects, with forecasts for F17 revised downwards, or to remain flat,’ GCR projected.

In the year to March 2016, total comprehensive income attributable to share holders fell to R503 million from R915 million in the previous year.

‘The retail landscape has undergone significant changes over the last two years, with 800 stores being closed as a consequence of the Ellerine Group business rescue and a further 265 stores being closed by the JD Group,’ says Greg Boulle, CEO of furniture manufacturers the Bravo Group.

‘Although Shoprite and Lewis have increased their retail footprint, there has been a net closure of 25% of the furniture stores in the country.’ Boulle adds that 25% of jobs in furniture manufacturing had been shed in the last decade.

For the sector as a whole, it is relevant to recall that while higher-end consumers are the first to cut spending when interest rates rise, they are also the first to feel the benefit when finance costs fall. Any return to political stability would allow specialty retailers to ride the ups and downs of the economic cycle unhindered – though there are few immediate signs of this.

The concern is that discretionary retail will be held back at all points of the cycle. That said, this is not a reason to avoid the sector but instead an argument for being selective.

‘In terms of outlook, increased demand for furniture will lag the growth in the local economy so we do not foresee any meaningful growth in the industry within the next couple of years,’ says Boulle. ‘We think that retailers will be looking to increase imports of certain categories of furniture while continuing to apply pricing pressure on local manufacturers.’

Under these testing conditions, the leading players in their categories will find it easier to steal market share than in a boom. There will also always be companies defying the odds. There may even be opportunities for those that don’t outperform but are simply sturdy.

Already most discretionary retailers’ share prices are trading at a significant discount to the overall JSE market. More bad political news (yes, it’s possible) could see all companies punished unfairly by the market. That may create the buying opportunities investors are so desperately calling out for.