Economically speaking, empowering women entrepreneurs is, to use the parlance of our times, a no-brainer. As the igniters of innovation, entrepreneurs create jobs, help uplift communities and, perhaps most important of all, inject the collective psyche with a life-giving shot of galvanising, visionary spirit.

As opportunities increase and circumstances improve, women the world over are rising to the challenge of creating their own wealth, starting and running their own businesses, and contributing to the development of their communities in the process. The International Labour Organisation estimates that women entrepreneurs account for a quarter to a third of all businesses in the formal economy worldwide – and SA reflects this.

According to a 2016/17 Global Entrepreneurship Monitor (GEM) report, SA women are still in the minority in terms of the entrepreneurial landscape. While more than 50% of the country’s population is female, they account for less than a third of the nation’s entrepreneurs.
SA’s economy, to put it bluntly, can use all the help it can get. ‘For South Africa, the importance of entrepreneurs and the development of a new generation of SMEs is at the heart of the National Development Plan,’ says entrepreneur Melanie Hawken, CEO and founder of Lionesses of Africa, a women entrepreneur community across Africa.
‘The NDP states that 90% of the approximately 11 million jobs that need to be created by 2020 will be created through small businesses. Let’s think about this for a minute,’ she says. ‘Our own government and the country’s economic brains trust is stating that entrepreneurs and small business owners will create not 10% of the jobs that are needed in this country, but 90%. The importance of entrepreneurship – both men and women – to the future prospects of South Africa is there for all to see.’

Yet female entrepreneurs are still a woefully untapped resource, not only in terms their potential to help create a more robust economy but also because economically empowered women are good for the health of society as a whole. 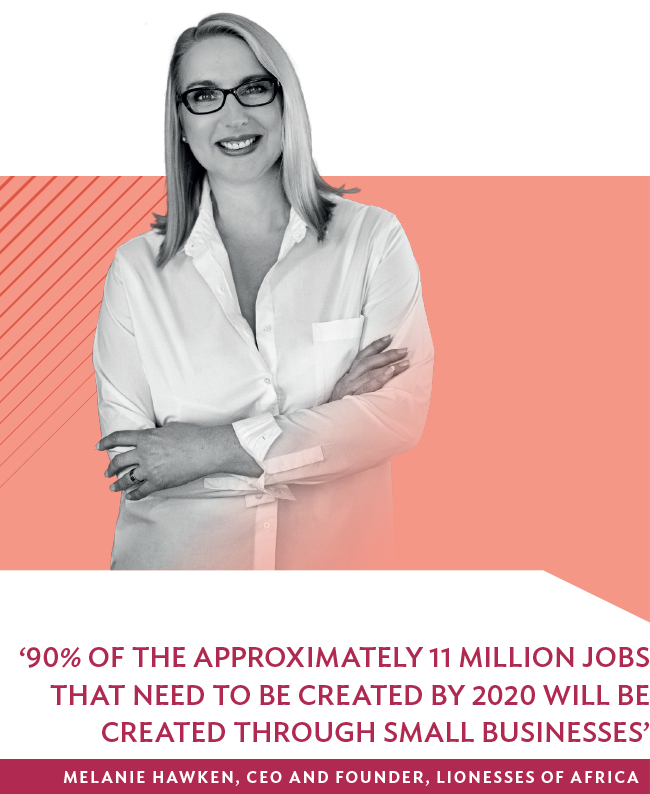 Winda Austin-Loeve, president of the Small Business Institute, agrees with the World Bank’s Gender Mainstreaming Strategy, which highlights that societies in which gender discrimination is prevalent tend to experience less rapid economic growth and poverty reduction than societies where there is more gender parity. ‘Women are the educators and caretakers of the nation’s children, and women entrepreneurs are extremely important to the economy of South Africa,’ she says.
‘Every successful woman invests in the future of her children, and therefore in the future of South Africa. They are driven, passionate about business and determined to succeed. They are a force to be reckoned with. However, many of them are in need of the correct guidance.’ So then why – 24 years after SA technically became a free and fair democracy with equality as its founding principle – is the upliftment of women entrepreneurs still so glaringly deficient?

The GEM report found that the country’s patterns were consistent with the same challenges and obstacles faced by women entrepreneurs the world over, to varying degrees relative to their country’s culture and customs – namely higher levels of domestic responsibility; lower levels of education; too few female role models in the business sector; fewer business-orientated networks in their communities; insufficient capital and assets; lesser status in society; and a culturally induced lack of assertiveness and confidence in their ability to succeed in business.

It’s clear that there is a need to increase female ownership and management of existing and new enterprises by improving women’s skills and access to economic activities and infrastructure. But while these challenges are very real – and there are many more besides – the issue is far more complex than perhaps many would like to admit.

‘What are the greatest challenges for women entrepreneurs? There is no simple answer to this question for South Africa, or any other African country, or anywhere in the world for that matter,’ says Hawken. ‘Even though we are connected to over 600 000 users in our network; connected face-to-face with over 6 000 women entrepreneurs across 54 events in South Africa and Africa in 2017 alone, we still can’t confidently provide a straightforward answer to this question. All we know for sure is that there are multiple obstacles and challenges that need to be worked on to help women entrepreneurs.
‘We know that balancing and aligning all the building blocks required to help advance women entrepreneurs is a multifaceted and complex matter. Anyone who believes it is just access to capital, or just access to markets, or just entrepreneur education, or just mentorship, or just access to networks, or just cultural challenges that women face is just plain wrong. The obstacles facing Africa’s women entrepreneurs are all of these things and more. To sum up, I’d say that in a strange way the greatest obstacle facing South Africa is a naive belief that there is one silver bullet that can fix things.’

Silver bullets aside, what is currently being done to assist female entrepreneurs in SA?

Government has several programmes in place. The Small Enterprise Development Agency (SEDA) places a special focus on women-owned enterprises. There are also projects by the Department of Trade and Industry, such as B’avumile Skills Development Initiative (a women-empowerment projects, aimed at identifying talent in the arts and crafts, and textiles and clothing sectors) and Technology for Women in Business, created to improve the application of science and technology to achieve business growth in women-led enterprises, with a special focus on SMEs.

The Industrial Development Corporation – owned by the SA government under the supervision of the Department of Economic Development – manages the Women Entrepreneurial Fund as well as the Isivande Women’s Fund, both of which provide financial support for women business owners. Then there’s the private sector, which has far more power to uplift women entrepreneurs.

In February this year, the International Finance Corporation (IFC) – a member of the World Bank Group – announced that it would release funding to the tune of R1.2 billion to FNB, in an effort to bolster the bank’s lending to SMEs, particularly those that are women owned. This forms part of the IFC’s Push Programme, established last year with the aim of channelling around R39 billion into SA SMEs over the next five to seven years.

In 2015, venture capital firm Business Partners Limited launched a R250 million Women in Business Fund to help boost investment in commercially viable women-owned businesses. Then there’s Alitheia Identity Fund, created by three successful female entrepreneurs with the aim of investing in innovative, growing women-led SMEs in sub-Saharan Africa. Meanwhile, the Absa Women Empowerment Fund does what it says on the label, providing amounts of between R50 000 and R5 million to female entrepreneurs.

Nedbank – where women constitute 67% of the workforce and its Women’s Forum addresses the advancement of women into leadership positions at the bank – has several programmes dedicated to supporting and growing SMEs. Earlier this year it launched, in conjunction with life-skills organisation Woman of Stature, a self-development and entrepreneurial initiative focusing on the growth and development of women. 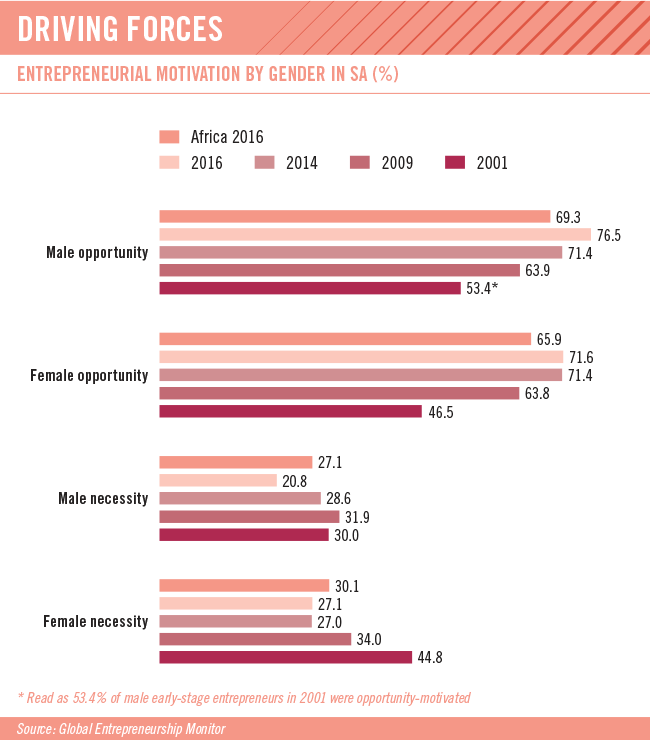 Called the 5 Pillars of Empowerment Learning Journey, it’s aimed at ‘kick-starting young women’s professional careers as well as providing them with the tools that they may require in their personal lives to navigate their way through life’. Fifty women, chosen for their ‘intrinsic qualities and drive as change agents’, as well as their business acumen and ‘ability to impact lives in the broader community’ will participate in the programme.
These are some of the top funds available to support women business owners. Is it enough?

‘South Africa has no shortage of entrepreneur programmes and initiatives,’ says Hawken. ‘But for the close on 200 000 South African women entrepreneurs in our network, much of the feedback is that they don’t deliver the impact they need. ‘On the positive side, we are increasingly seeing the big companies we interact with owning up to this fact and recognising that their initiatives are falling short. So, in the near term, I think you will see lots of programmes being rethought or significantly adjusted to meet the specific needs of women entrepreneurs.’

Austin-Loeve argues that there is very little support and assistance from the private sector. ‘Some corporates have business and entrepreneurial incubators, where they accommodate and host small businesses. But this is still inadequate because of the huge demand,’ she says. ‘Women have multiple responsibilities and need to juggle between business, families and communities. This results in unique issues on the personal side and should be addressed as such.
‘My suggestion is that private companies not only contribute financially but appoint business coaches as part of the contributions made to supplier and enterprise development companies. These coaches will assist in guiding women-owned business to become sustainable in the long term.’ Austin-Loeve adds that education is central to gender equality as it has ‘implications for an individual’s ability to engage with and contribute to society. Women currently comprise 57% of higher education enrolments and 64% of enrolments in post-graduate degrees below the level of master’s degrees’.

An encouraging sign, according to the GEM report, is that the widening of the gender gap noted in 2015 has been reversed. In 2016, more than seven women were engaged in early-stage entrepreneurship for every 10 male entrepreneurs, in line with the averages for both the Africa region and for the efficiency-driven economies. In terms of the GEM sample as a whole, SA ranked 22nd out of 65 economies for the ratio of female-to-male early-stage entrepreneurship activity – ‘a positive finding’. 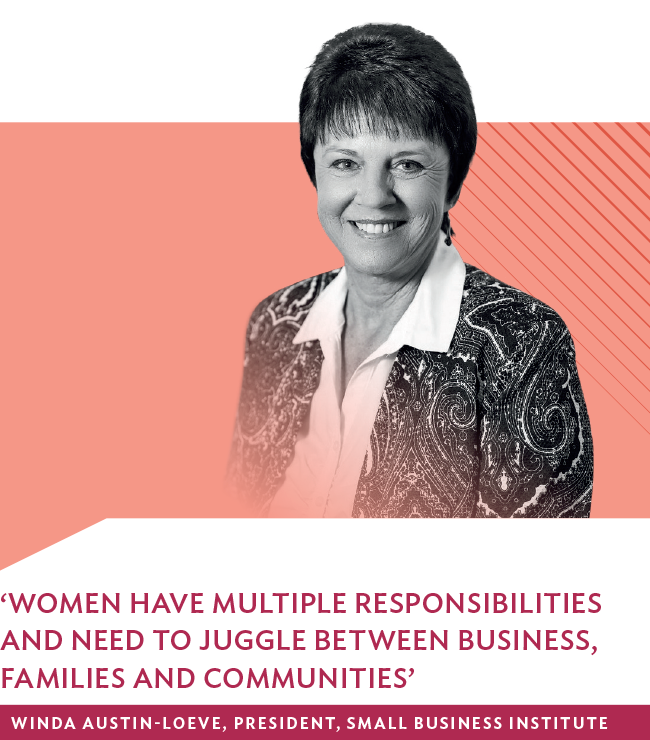 Affirmative action can help but, ultimately, the goal should be to have the best man or woman for the job, irrespective of gender or race.
Mentoring is undoubtedly a crucial ingredient for successful entrepreneurship, particularly in SA where skills are in short supply and few have the luxury of learning from their own mistakes – it’s better to learn from those who have been there, done that.
‘Mentorship and coaching schemes can play a big role in getting women entrepreneurs to gain confidence and run their businesses effectively,’ says Jerry Gule, CEO of the Institute of People Management. ‘If the mentors are people with a business track record and are role models, this would be of immense benefit to the development of these women. Through building cross-sector partnerships among experienced people – public, private and non-governmental organisations – an ecosystem in which large and small business can thrive could be built,’ he says. ‘I long for the day when women are not “othered” and are promoted simply because they are good and can do the job,’ says entrepreneur and empowerment activist Pontsho Manzi. ‘The progress of women in the private sector will not [be] as fast if women are still viewed as a group that needs to be empowered and put in positions using quotas. It would also help if women who do crack it hold the elevator door open for other women to get in.’

One such woman is Hayley Eagle, owner of Jamesco Automotive Assemblies, based in Gauteng. Eagle was mentored by a former employer, and eventually realised her dream of opening her own plant with the assistance of the Export Credit Insurance Corporation of South Africa through SEDA – no mean feat, especially in a very much male-dominated industry.
‘Jamsco has a female supervisor, female team leader, female quality controller and female operators,’ says Eagle. ‘The automotive sector is a tough, fast-paced, male-dominated environment and we unapologetically favour our women by protecting their jobs with all the challenges encountered. We employ additional resources to allow women to be mothers and, as society requires, the caregiver, breadwinner and source of encouragement and positivity, without compromising our work ethics.’

This is one example that shows how mentorship and funding can help motivated women entrepreneurs break new ground in SA. ‘Despite all the challenges, women entrepreneurs are rolling up their sleeves every day, going out and making things happen,’ says Hawken. ‘They are no longer waiting for policy-makers or a perfect, supportive ecosystem to emerge. They are just getting on with it.’