You might have heard the one that goes: ‘My boss told me to have a good day. So I went home.’ Or this one: ‘I’ve used all my sick days, so I’m calling in dead.’ But jokes aside, absenteeism from the workplace is a massive problem that costs the economy an estimated R12 billion to R16 billion per year. Unplanned absenteeism means that an employee misses part of or entire days of work because of illness, personal business or other reasons, excluding paid holiday leave.

On any given day, an average of between 15% and 30% of staff are absent from work, according to data by Occupational Care South Africa (OCSA). And two out of three employees who are absent are not actually ill. Furthermore, SA loses 11.4% of working days per year (25 working days per employee) because of suboptimal health, compared to 9.1% for the UK.

If an employer contracts agency personnel to cover for absent staff, the hourly wage costs to the company can rise by 250% to pay the absent worker plus the remuneration for the replacement.

However, it’s not all grim because leading employers have demonstrated that absenteeism can be reduced through corporate interventions to motivate and engage staff, and to improve their health and overall well-being.

‘Unwarranted or excessive absenteeism is not only costly in terms of lost productivity, but it also impacts on company finances, staff morale and customer satisfaction,’ says Clare Moncrieff, HR principal executive adviser at CEB – a best practice insight and technology company.

‘Our research shows that workforce engagement levels in South Africa are mixed. While a third of workers are going the extra mile in their role, a similar proportion intends to leave their employer before the end of the year. Low levels of intent to stay can lead to absenteeism as well as performance and retention challenges,’ she says.

Moncrieff adds: ‘In order to prevent absenteeism, companies in South Africa need to monitor engagement levels through regular workforce surveys. Line managers also need to engage in open conversations with their team members to understand their aspirations, long-term career plans and discuss the skills and experiences they are keen to gain. Managers should set out opportunities and expectations with employees and let them decide whether or not they want to commit to the organisation.’

Disengaged individuals who lack motivation and are not doing their job properly pose a serious risk to the growth of an organisation, says Chad Schaefer, EY Africa leader for people advisory services. ‘The phenomenon of “presenteeism”, where people are at work physically but not fully present mentally, is more harmful and incurs higher costs to a company than absenteeism. It’s also far more difficult to measure.

‘Our studies have shown pervasive results. We’re talking billions of rands that are lost through presenteeism in South Africa every year. We found that in one organisation it affected only 0.4% of the workforce, but the sheer toxicity of those individuals was so significant that it caused a lot of damage to the company,’ he says. EY has identified a link between lack of productivity and the amount of sick leave taken. As soon as presenteeism reduces and employees become more engaged, the absenteeism rate  improves as well. ‘It’s human nature that, even at a lower level, people like to know they are making a contribution to an organisation,’ says Schaefer.

‘Key drivers in combating presenteeism include improving the relationship between an employee and supervisor, and instilling employee pride in the organisation for which they work. This could result in an engaged workforce that may become a key differentiator and strategic driver for a company. 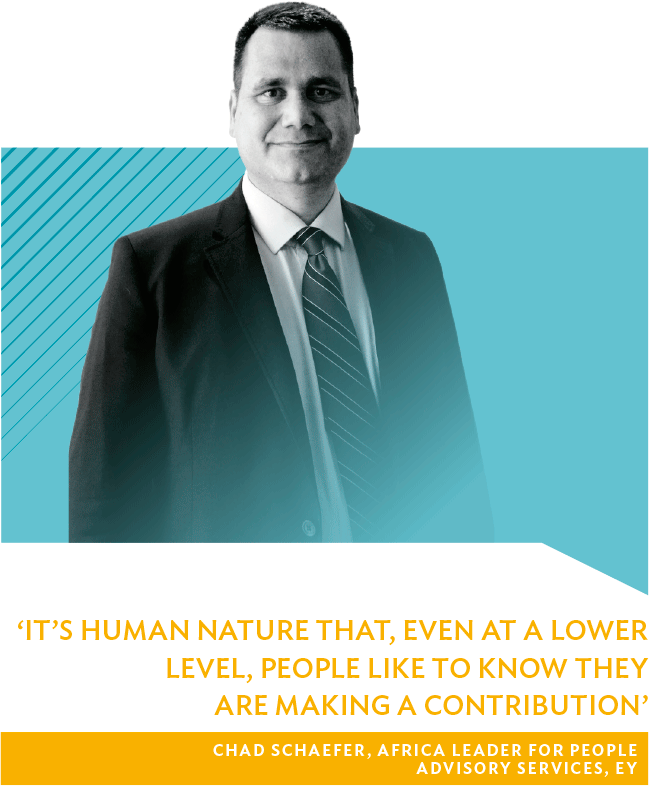 Absenteeism is easier to quantify, and the first step towards getting a grip on the problem is by measuring and recording how much time staff members spend away from work. Absence management software can track attendance, capture reasons for being absent, manage medical certificates and legal compliance issues, and identify high-risk staff and patterns.

‘Data alone doesn’t mean anything if there’s no holistic approach,’ says Reggie Stiglingh, knowledge and risk executive at OCSA. ‘Employers need to have policies in place to deal with absent staff, to find out whether a person is sick, may have family or financial troubles, or is simply abusing the system. That way employees can be disciplined or referred to specialists such as psychologists, physiotherapists and debt counsellors.’

Whatever their reason for being off work, staff need to know there will be consequences. Stiglingh says that on top of this, workplace injuries and health hazards such as chemical substances, biological agents and excessive noise levels need to be assessed.

She adds that reasons for being off work in SA are very much in line with international data regarding upper and lower respiratory tract infections, gastroenteritis and colitis, and seasonal allergies and flu.

Other common causes include depression, stress and burnout, chronic diseases related to high blood pressure and cardio; back and neck injuries; and family responsibilities such as child and elder care. An added local dimension is the lack of transport, crime-related trauma and medical issues arising from tuberculosis and HIV/Aids.

Lifestyle diseases place a huge burden on employers and also the healthcare industry, according to Chris Luyt, marketing and sales executive of Bestmed.

‘More and more employers are adopting health-promotion and disease-prevention strategies – commonly referred to as workplace wellness programmes – to address these issues.

‘We believe corporate leaders should become role models to their staff by looking after their own health and creating a culture of well-being within the workplace,’ he says. 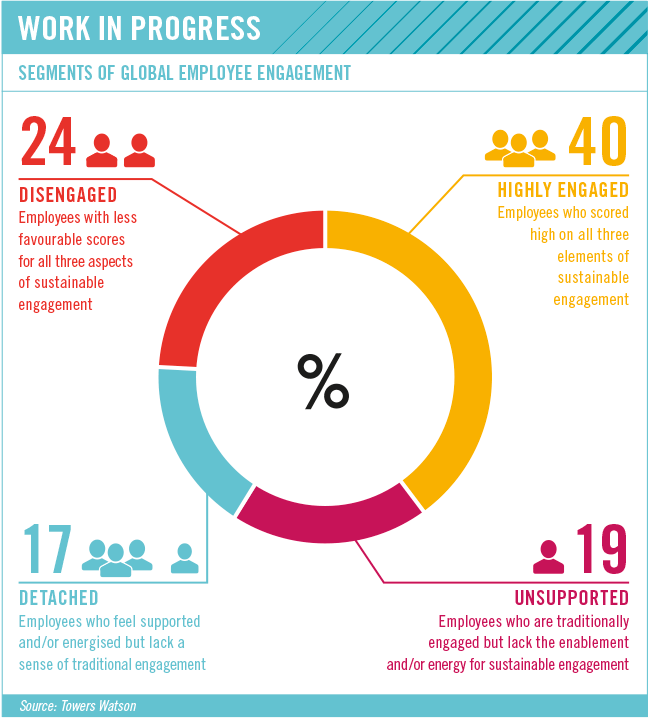 Alcohol and drug abuse also play a role, with staff often taking a sick day because of hangovers after payday or public holidays, or to extend their weekend. In Australia, a survey by Direct Health Solutions found that Monday was the most popular day to call in sick (40% compared to 3% on Thursdays).

Sometimes curious patterns of absenteeism emerge. Essential Employee Benefits (EEB), a division of Workforce Holdings, found that staff often report ill around the 20th of the month. This seems to be related to financial worries that build up as the month goes by, until the stress eventually causes physical symptoms. Come payday, the financial stress eases off for a while.

EEB MD Eli Unterslak offers the case study of Mrs X, who calls the company call centre on the 20th with abdominal pain. She is diagnosed with a spastic colon, given over-the-counter medication and booked off for the day. Ten days later, Mrs X calls again with the same problem and receives the same treatment.

According to Unterslak: ‘When she calls a third time a few days later, she is referred to a psychologist because 50% of all abdominal issues are stress related. Judging from the time of the month Mrs X was exhibiting these symptoms (around the 20th), these stress-related issues are most likely linked to financial stress.’ He explains that the second-largest reason for absenteeism – after illness – is financial stress, which will often present itself as physical illness. EEB has found that employee access to benefits such as financial literacy and financial management is improving productivity and reducing absenteeism in the workplace. Other successful measures include staff transport, because lack of reliable transport often prevents staff from coming to work.

Meanwhile, Personal Trust – a small trust and investment management firm in Cape Town – incentivises staff for being healthy. ‘For zero days of sick leave in a calendar year, we gift an additional four days of annual leave. We find this an effective way of rewarding diligent employees. In 2015, 34 of our 106 staff members received these bonus days,’ says Personal Trust HR director Nicole McIntyre.

She adds that the system is better suited to small firms because it involves a high level of trust: ‘We trust that people are prudent with their health and don’t come to work when they’re sick just to claim the incentive. Trust is what we sell in our business, so we extend this to our staff.’

There is a correlation between offering employee benefits and reduced absenteeism, according to the Top Employers Institute. Multinational companies with operations throughout Africa have dramatically reduced their absenteeism rates through targeting employee well-being, says the global certifier. 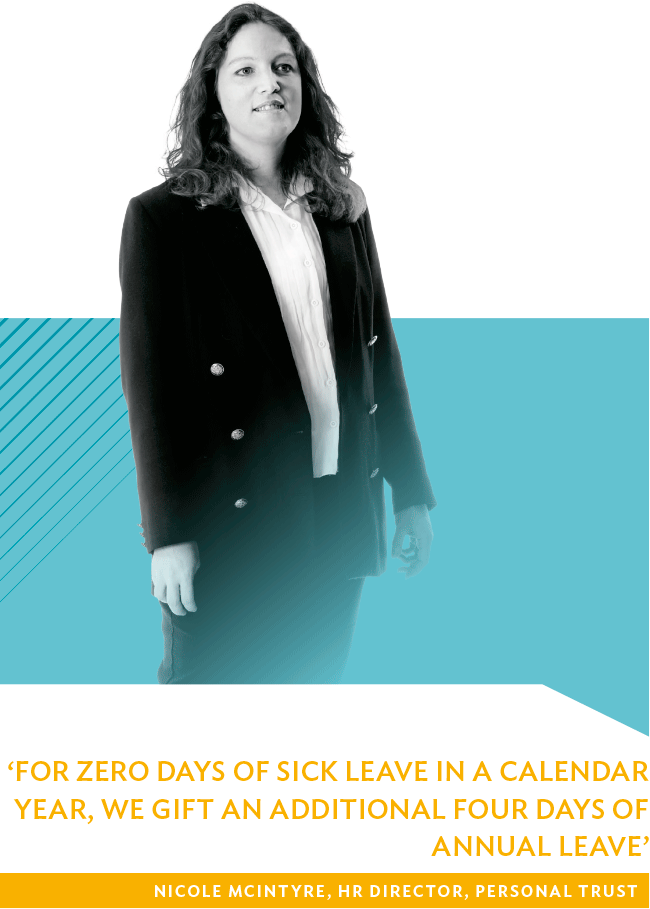 While Google reportedly treats its workforce to beanbags and sleep pods in the office, SA companies also come up with unexpected perks. For instance, Outsurance encourages staff to keep fit in an indoor action sports arena at their Centurion head office. They can play cricket, netball, soccer and volleyball, and use the running track while leaving their children in the after-hours and holiday crèche.

A winner in Discovery Vitality’s 2014 Healthy Company Index, Open Box Software, is said to provide a free healthy breakfast to staff. Employees are also encouraged to randomly stop work for 15 minutes and use the treadmill in the fully equipped gym. Other benefits are free car washes, a pool table, running and cycling groups and flexible working hours.

However, arguably the best news for corporate SA is that employee health has been linked to positive stock market performance.

The Vitality Institute quoted a study in the Journal of Occupational and Environmental Medicine, published in February 2016, that has compared the stock market performance of 10 of the healthiest companies in SA to the market at large. The research states: ‘Nine different investment scenarios were tested and, in all nine scenarios, the healthy companies outperformed the JSE All Share Index. Companies with best-in-class workplace health programmes outperformed the Standard & Poor’s Index by 7% to 16% per year.’

This connection may encourage employers to reduce absenteeism by investing in the health and wellness of their employees. After all, when the employees are healthier, the bottom line seems to be more robust as well.