Stock markets offer numerous benefits including the provision of a transparent platform for capital raising and the efficient allocation of resources. They encourage good corporate governance through stringent listing requirements and lower the cost of transactions. Better-developed capital markets play an essential role in growing commerce and industry, which has a positive effect on the economy.

One way in which stock exchanges across the continent can be strengthened is through more cross-listings. African stock exchanges have been developing at a rapid rate, aided by the work done by organisations such as the African Securities Exchange Association to improve governance and encourage company listings. But the liquidity of many of the continent’s stock exchanges is still low compared to international markets.

African stock exchanges tend to offer a limited number of stocks. Rwanda’s bourse, for example, listed just five companies in 2014. Stocks on many African exchanges are illiquid and thinly traded while attracting high transaction fees. ‘This poor liquidity is a significant inhibitor to international investment, and can also have the consequence of poor pricing of markets when only small quantities of shares trade,’ according to a 2015 report by investment advisory firm RisCura.

In an effort to strengthen the continent’s exchanges, the JSE is encouraging firms to list on both their local bourses and the JSE. This benefits the JSE too – more developed financial markets will attract more investors.

A cross-listing on the JSE offers African companies access to alternative pools of liquidity and a different class of investor, according to Donna Nemer, JSE Director of Capital Markets.

‘An African company outside South Africa listing on the JSE would have access to a sophisticated market with the most liquid equities market in Africa, where the assets of non-banks and institutions are over R9 trillion,’ she says. 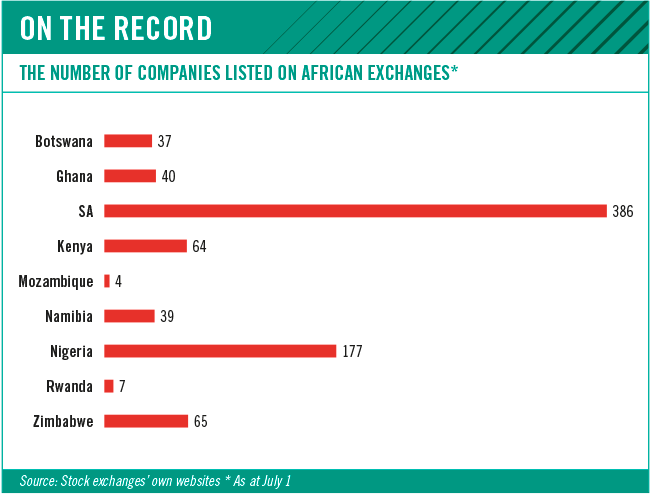 Not only do cross-listing companies have access to a more diversified shareholder base, but they also benefit from improved liquidity in their primary listing market because of arbitrage – the buying of the share in one market and selling it in another market to make a profit – says Nemer.

A company’s brand receives a boost in its local market and abroad from the higher profile and visibility it builds through a cross-listing.

African companies listing on the JSE also benefit from the quality and size of the exchange – it’s the largest on the continent and number 19 worldwide. The WEF’s latest Global Competitiveness report ranks the bourse second in the world in terms of exchange regulation. It ranked in first place for the previous five years, though SA has now been overtaken by Finland.

The country ranks number one out of 140 countries when it comes to the strength of auditing and reporting standards and financing through the local equity market. The protection of minority shareholders’ interests in SA is third-best in the world. This puts it firmly in the position of Africa’s best regulated and most efficient financial market.

According to consultancy PwC’s 2015 Africa Capital Markets Watch report, the ‘JSE remains a reliable anchor of African capital markets activity’. Since 2011, the exchange has been responsible for 45% of the total African capital raised in initial public offerings.

Fourteen companies from the rest of Africa are listed on the JSE, 10 of them on the Main Board and four on the AltX, which caters to small and mid-size issuers. Botswanan-based supermarket Choppies was the most recent company to cross-list on the JSE.

‘Choppies was very popular with investors, raising about R700 million,’ says Nemer. The company used the listing on the JSE to raise capital to grow its SA business as well as to make acquisitions in other African countries.

A cross-listing on the JSE has the potential to attract global investors seeking access to the fast-growing economic growth opportunities in countries across Africa. Many institutional investors are mandated to invest only through exchanges that belong to the World Federation of Exchanges. Just five bourses in Africa belong to this body: the JSE and the exchanges in Morocco, Mauritius, Egypt and Nigeria. Global investors struggle to invest in listed equity in many African markets due to the limited number of listed stocks and the lack of liquidity.

‘Many investors invest in South Africa to get exposure to other African markets,’ says Nemer. ‘They do this in several ways – either by buying SA companies heavily invested in Africa, such as MTN and Shoprite, or they invest in African stocks listed on the JSE.’

Accessing rest-of-Africa equity exposure via the JSE offers global investors liquidity and the ability to easily convert foreign exchange in and out of rands, as exchange controls do not apply to non-SA residents. ‘Their operational risk in SA is lower because of the JSE’s sophistication and technology – they benefit from the quality of our markets, transparency, regulation and the strength of our clearing and settlement procedures,’ says Nemer.

Nemer maintains that competition with the LSE is healthy because it encourages the best offering. ‘But I think the JSE has the advantage of regional knowledge: we are in Africa and understand it. Our whole ecosystem – analysts, brokers, investment banks, regulators – has a stronger understanding of the region and the markets.’

Not only is it cheaper to list on the JSE than the LSE, but the former also offers world-class regulation and global accolades, she says. ‘The feedback we have received from companies looking to list here versus London is that our turnaround times and costs are more attractive.’

According to Dianna Games, CEO of advisory firm Africa @ Work, there’s a case to be made for SA companies with significant interests in other African countries to cross-list on local exchanges. This would create goodwill as local companies demonstrate their commitment to the countries in which they operate. It would also build their brands and improve their relationships with governments and regulators, as well as potentially have a positive effect on local pension funds. 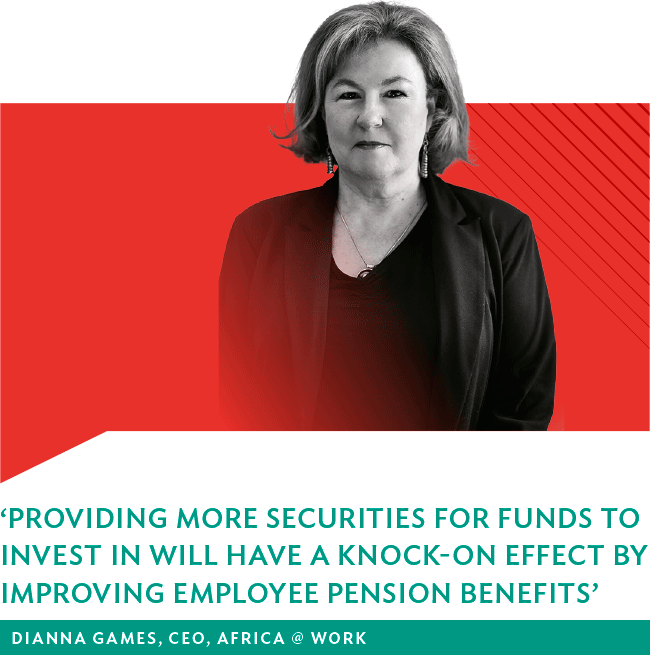 ‘Providing more securities for pension funds to invest in will have a knock-on effect by improving employee pension benefits,’ says Games.

She notes that just a handful of SA companies have cross-listings in the rest of Africa, including Standard Bank, First National Bank and Shoprite.

Nigeria, Ghana and Tanzania are considering mandatory listings for certain sectors, including telecoms, says Games, adding that ‘South African companies growing across the continent should consider jumping before they are pushed’.

Nemer agrees that SA companies should consider listing in other African countries to raise their profiles as well as local currency capital or debt in those markets. ‘Companies should consider listing in those main markets particularly if this is going to offer natural hedges in terms of capital raising,’ she says. About a quarter of the counters listed on the JSE are cross-listed in other markets.

‘The reality is we have learned to live with cross-listings quite well, and often they are well suited to a company’s structure and strategy.’

Cross-listings may also work well for debt issuance. The JSE intends growing its debt markets and to date, five issuers from the rest of Africa have raised some R4.745 billion in debt. Among them are the Namibian government and the State Bank of Mauritius. ‘Our capital markets are deep and liquid, and as investors look for yield, they will start looking for diversification from equities into fixed income,’ says Nemer. The JSE is also working on cross-listing ETFs, with discussions under way between Nigeria, Kenya and SA.

‘We will do what we can to support and facilitate the strengthening of capital markets across Africa,’ says Nemer. The JSE has signed MOUs with a number of African exchanges to promote capacity building and cross-listing, as well as skills and product development. Staff from exchanges are being seconded between the rest of Africa and the JSE, and vice versa.

Cross-listings will continue to have an important role to play in building Africa’s economies. As stated in a 2014 report by the UN Conference on Trade and Development: ‘Given the small size of African economies, capital market development will be more effective in channelling savings into long-term investments if it is done at the continental or regional level.’