SA must not lose sight of the climate change crisis

There was a recent cartoon of two men standing inside a mathematical graph. Looking down on a small curve labelled ‘COVID-19’, one says to the other: ‘I’ll be happy when this is over’. But behind their backs looms a far bigger, rearing curve with the words ‘climate change’.

This scenario reflects the growing realisation that yes, the coronavirus has extracted a horrendous cost from humanity and the global economy, but that climate change – the big societal problem we have relegated for too long – is likely to be even more devastating in its impact, especially on how companies do business. Yet unlike Pfizer, AstraZeneca or Johnson & Johnson, there is no vaccine on hand to conquer the climate emergency. Instead, it will require long-term strategic planning and collaboration between all arms of government, the private sector and civil society.

‘If you want to understand the kind of damage that climate change will inflict, look at COVID-19 and spread the pain out over a much longer period of time,’ says Bill Gates, who is one of the tech billionaires zealous about alleviating the climate emergency. ‘The loss of life and economic misery caused by this pandemic are on par with what will happen regularly if we do not eliminate the world’s carbon emissions.’ SpaceX and Tesla CEO Elon Musk has gone as far as offering $100 million in prize money to whoever succeeds in removing CO2 from the air.

Global warming already costs SA at least 10% of its GDP, according to Stanford University. Another study, published in 2020 by the Euro-Mediterranean Centre on Climate Change, predicts that rising temperatures will hamper economic productivity and labour availability in SA, slashing up to 20% from the per capita GDP.

The Institute of Risk Management South Africa (IRMSA) refers to climate change as a ‘slow-boil’ risk, meaning it gradually heats up over time and remains unnoticed by the public until it’s boiled over into a potentially catastrophic event. The IRMSA darkly warns in its newly released 2021 risk report that ‘if we do not actively, purposely and constructively start doing the actual things that will shape our future, we have very little chance of having a future’.

COVID-19 and climate change are related in that they are both threat multipliers that widen existing systemic fault lines in society (such as growing inequality and unemployment). But the approaches to dealing with these two crises have been very different. 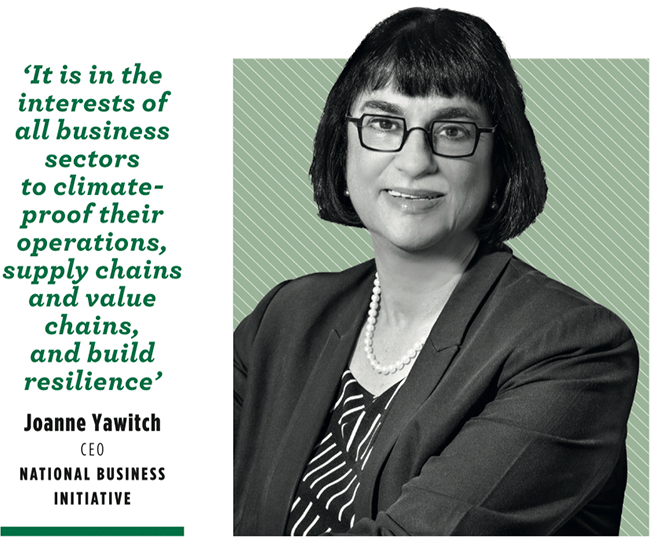 ‘The COVID-19 pandemic was swiftly recognised as a global crisis, which required immediate action from governments globally,’ says Francois Engelbrecht, climatology professor at Wits University’s Global Change Institute. ‘The imminent threat that climate change poses to the planet and humanity is just as real as the COVID-19 crisis, yet collectively the world has been slow in taking “climate action” in terms of drastically reducing greenhouse gas emissions.’

SA, with its high reliance on fossil fuels, contributes on average more carbon emissions per capita than its G20 peers (8.85tCO2/capita compared to 7tCO2/capita), according to Climate Transparency 2020. ‘The guidance from climate science is clear: anthropogenic emissions of CO2 – burning coal and oil – is the single-most important mechanism driving the process of global warming,’ says Engelbrecht. He further explains that global warming has now reached a level of about 1.2°C above pre-industrial levels – with climate change considered ‘irreversible’ and increasingly ‘dangerous’ at a temperature rise of 2°C, possibly even at 1.5°C.

‘For Southern Africa, it means that at these levels of global warming the region can expect more frequently occurring heat waves and multi-year droughts as the single-most important climate change risk,’ he says. ‘Over north-eastern South Africa and particularly Mozambique, there also exists the risk of more frequently land-falling tropical cyclones.’

Such extreme weather events come with significant human and financial costs. In 2020 alone, storms, fires and floods killed at least 8 200 people and cost the world $210 billion in insured losses, according to reinsurance firm Munich Re.

In SA, the 2017 Knysna fires cost more than R3 billion in damages and were the single-largest insured loss in the country’s history at around R2 billion. Later the same year, the KwaZulu-Natal floods caused an estimated R2 billion losses, according to the IRMSA’s latest risk report (which does not quantify how many lives were lost).

One of the unforeseen side effects of COVID, however, is that it has drawn attention to the unsustainable use of natural resources and its negative impact on people and planet. ‘The initial lockdowns resulted in cleaner air and waterways and reduced emissions,’ says Joanne Yawitch, CEO of the National Business Initiative (NBI). ‘This, in turn, has created a compelling case for sustainability – and for climate action, as part of that, to be at the forefront of economic and developmental policy. This could result in a long-term change in behaviour and in patterns of consumption and production. However, this would need to be underpinned by supportive policies, adequate financing and a long-term plan.’ 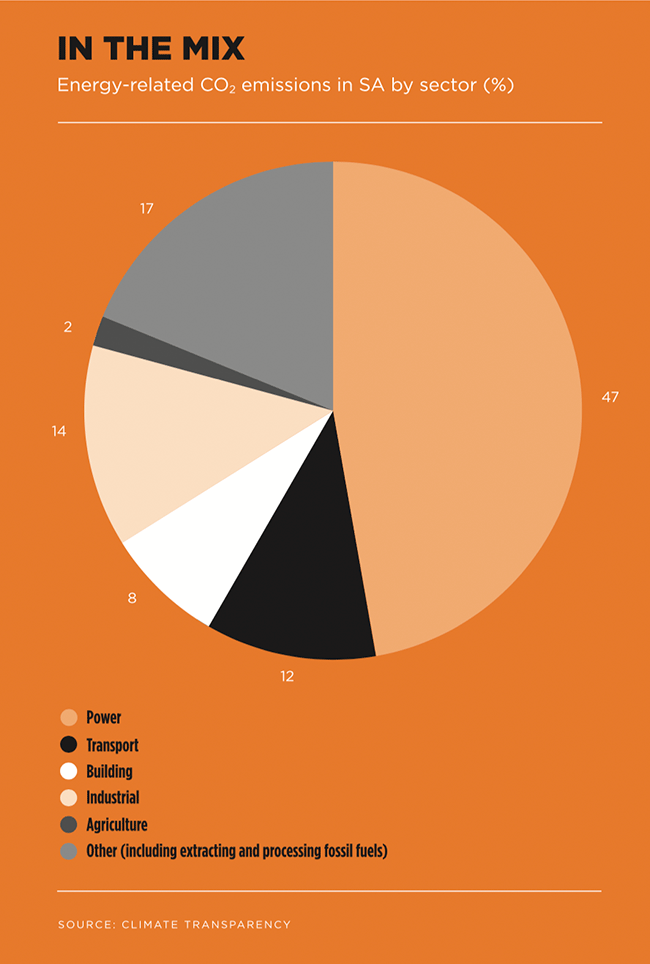 Yawitch herself is set to influence such high-level decision-making, after recently being appointed to the inaugural Presidential Climate Change Co-ordinating Commission (P4C), which will advise and guide the nation’s climate response towards a ‘low-carbon, inclusive, climate change-resilient economy and society’ – known as the ‘just transition’.

She sees huge potential for SA business to innovate and invest in renewables and technologies of the future, such as green hydrogen and fuel cells. ‘My participation [in the P4C] and that of the other business reps ensures that the voice of business and the plans and actions that business is both implementing and planning will have a voice at the highest level and can be integrated into a national direction built on across-the-board stakeholder consensus,’ says Yawitch.

Yet while highlighting the impact of climate change, the pandemic has also delayed and potentially set back climate action, both in SA and worldwide.

‘Government is only just working, and the private sector has probably reduced the priority here, favouring immediate business survival over even medium-term issues,’ according to Bob Scholes, professor of systems ecology at the Wits Global Change Institute. ‘But COVID has also shown that things we previously thought to be impossible are very feasible, if we put our concerted minds to them.’

An example of this is Business for South Africa (B4SA), which was formed in March 2020 as a rapid response to COVID-19 and will eventually be disbanded. In a decisive, non-bureaucratic action, organised business mobilised volunteer resources from business organisations and small and large companies across all sectors to drive a co-ordinated programme. The goal was to support government in managing the coronavirus’ attack on the health system, labour market and broader economy. Today B4SA’s focus is on strengthening the national vaccine programme.

Could this alliance be re-purposed for climate action? Probably not, says Jarredine Morris, energy and environment policy manager at Business Unity South Africa (BUSA). ‘I believe the B4SA structure is more suited to the pandemic response than what is needed for the climate-change response. However, what it did demonstrate was the business community’s willingness to pull together and take action on key areas. This spirit of collaborative action has been taken through to areas beyond the B4SA pandemic response, and climate change and the “just transition” form one of these areas.’

She points to BUSA’s partnership with the NBI and Boston Consulting Group in the Just Transitions Pathway project. Launched in June 2020, the project intends to accelerate green stimulus, mobilise cross-industry collaboration and create a unified voice for SA business at the UN climate conference COP26 in Scotland, November 2021. 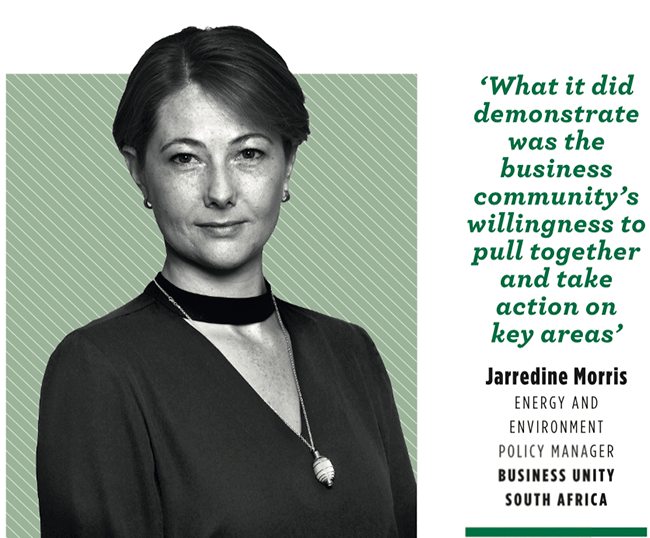 The project is well on track, according to the NBI. ‘The work to develop pathways to net zero by 2050 in the energy, chemicals and liquid-fuels sectors is almost complete,’ says Yawitch.

‘The results will be presented to our CEO Champions Group and we will then move on to a consideration of the land use, agriculture and forestry sectors; and also transport.’ She adds that ‘as the impacts of climate change become more severe, it is in the interests of all business sectors to climate-proof their operations, supply chains and value chains, and build resilience to the impacts of climate change’.

This also means looking at water resilience. SA corporates learnt a lot from the 2018 Cape Town drought, when it became essential to use less water and recycle where possible. Some companies, including Oceana on the West Coast (for its Lucky Star fish brand) and Tsogo Sun hotels in the CBD, established their own desalination plants to keep their operations going, save jobs and take pressure off the municipal water supply.

‘The drought and the related increase in water tariffs really improved the water use efficiency, which is a hugely important way of water saving because it means that there’s more water in the supply system,’ says Gina Ziervogel, associate geography professor at UCT and research chair for the African Climate and Development Initiative. She believes the Greater Cape Town Water Fund is a good example of a successful collaboration between public and private entities, NGOs and local communities. The focus on water stewardship and catchment restoration helps participating companies go beyond improving the water efficiency within their own operations by building the broader water resilience at community and landscape levels.

‘Catchment restoration is significantly more cost-effective than other water-augmentation solutions and 10 times cheaper per unit than alternative options,’ notes the Water Fund. Meanwhile the Global Change Institute warns that in addition to ‘shortages of clean water’, one of the top five climate-related risks is ‘a badly handled transition to low-carbon energy’ in terms of job losses and socio-economic development.

Scholes argues that ‘the transition is going to happen, for economic reasons quite apart from climate drivers. So engaging it earlier rather than later, and favouring justice to the entire society and economy, particularly for future citizens, over the vested interests of the past, is crucial’.

There’s a lot at stake for corporate SA, at a time when many businesses need all their resources simply to survive COVID-19. But at least the pandemic has taught us that we can no longer afford to turn our backs on the climate crisis.

The sooner companies integrate climate resilience into their recovery strategy and collaborate to keep sight of the bigger picture, the better SA will be prepared for whatever the future may bring.