According to Spoor & Fisher partner Herman Blignaut, the different types of intellectual property (IP) law all have one thing in common. Namely, to provide the proprietor of IP with a limited monopoly during which time they can economically or financially exploit the subject matter in which the IP rests exclusively, or to allow others to do so through commercialisation.

‘Any person who makes unauthorised use of this IP during the lifetime of the IP may be in breach of IP rights, and may be interdicted and/or face alternative claims such as an award for damages or alternatively, a reasonable royalty and delivery-up of the offending goods for destruction,’ he says.

‘The primary purpose of IP law is to give the proprietor of that right limited duration to exploit it to its full extent, after which that material falls into the public domain for others to use or rely on. Thus, IP is intended to provide some incentive to create new and improved works/products, in the absence of which expensive research and developments activities, for example, may not be worthwhile.’

With regard to why such laws are important and necessary, Blignaut explains that they ensure competition in the marketplace is healthy and lawful, and also work to attract foreign investment and world-renowned events. ‘A strong consideration for organisers of events is that SA has good IP laws, including anti-ambush marketing laws, which is when someone wants to market their goods or services on the back of a well-known event,’ he says. ‘So it protects the sponsors of these events and gives them exclusivity.

‘If any person could associate themselves with these events it would be the death knell for sponsors to back these events, as they would lose exclusivity.’

According to Gérard du Plessis, chairman of Adams & Adams and a trademarks and copyright expert: ‘It has been widely accepted, for some decades, that IP – although intangible – is an important component of the economic assets not only of a business but also of a country. In a publication published in the US in 1999, under the significant title Intellectual Property: the New Global Currency, the observation was made that IP was fast emerging as a new source of wealth, and that IP rights were increasingly being recognised as valuable assets to be protected and commercially exploited.

‘In a similar publication in the UK in 1998, it was stated that in a knowledge-based economy, IP assets have in many cases superseded physical assets as the basis of corporate value and as the foundation of a company’s competitive advantage.’

‘I think they are world-class, world-standard,’ says Blignaut, while Du Plessis adds that SA’s IP laws have come a long way, with the first consolidated IP law passed in 1916 – the Patents, Designs, Trademarks and Copyright Act 9. Since then, IP laws have been regularly revised and updated by the enactment of separate statutes on patents, designs, trademarks and copyright, as well as supplementary legislation. 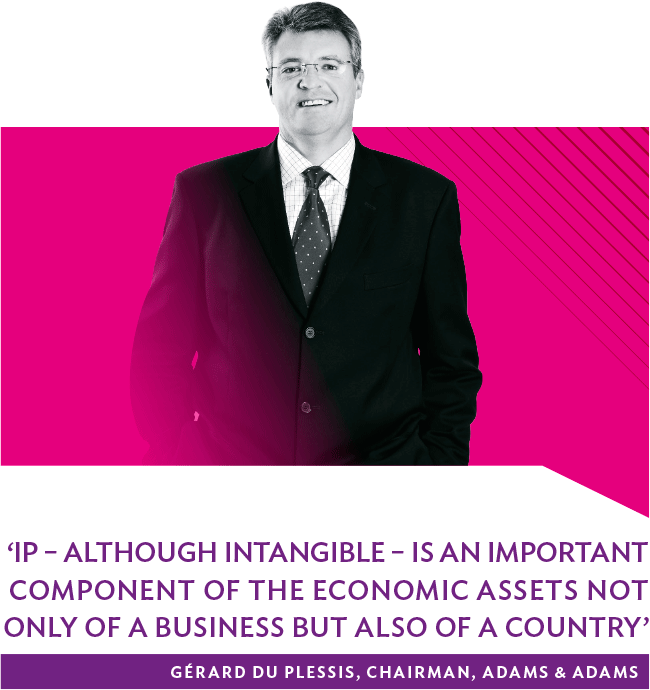 ‘South Africa’s system of IP laws was particularly evaluated and assessed at the time of the country’s accession to the TRIPS [Trade-Related Aspects of Intellectual Property Rights] Agreement, since this instrument set out mandatory minimum requirements for a member country’s IP laws,’ says Du Plessis. ‘South Africa’s IP laws were found to be fully compliant provided some minor amendments were effected – this took place in 1997.’

TRIPS is an international agreement overseen by the World Trade Organisation (WTO). It lays down minimum standards for many forms of IP regulation as applied to nationals of other WTO members.

Blignaut says there has been great effort from the World Intellectual Property Organisation (WIPO) and international treaties for there to be overlap between IP laws globally, to harmonise them. This streamlines the way in which countries deal with their own and each other’s IP rights.

‘South African law is aligned with international standards and is effective. These rights are enforced by the IP holders and our courts daily,   with good results,’ he says, adding that, generally speaking, SA’s IP laws are ‘healthy and achieve their objectives’. Blignaut notes, however, that there are ‘areas in which focus is required and overdue’.

One such area, he says, is the Copyright Act, which dates back to 1978. ‘It is outdated and has not kept track of technological advancements.’ Indeed, several changes have been mooted to the country’s IP laws, most notably as far as copyright, patents and trademarks are concerned.

Du Plessis explains that as many as 10 changes and/or new provisions have been introduced regarding copyright, via the Copyright Amendment Bill.

‘Apart from serious shortcomings in its drafting, this bill contains many controversial provisions, and more than 100 submissions with comments and proposals were lodged,’ he says.

‘There were substantial comments heavily criticising the act, which had some bizarre provisions,’ says Blignaut. ‘There was no basis to introduce such provisions into our Copyright Act and we are expecting a revised version in due course. The general consensus around the Copyright Amendment Bill in its form as published last year can only be bad news for South African IP law.’

In an online article, professor and chair of intellectual property law at Stellenbosch University Owen Dean commented that while the Copyright Amendment Bill had some good points, the execution was abysmal. ‘I have not come across a piece of intellectual property writing that is as badly formulated and presented, and that exhibits such a lack of understanding of the basic principles of the subject as is evident in this bill,’ he wrote. ‘The best approach would be for the dti to go back to the drawing board and start all over again.’ 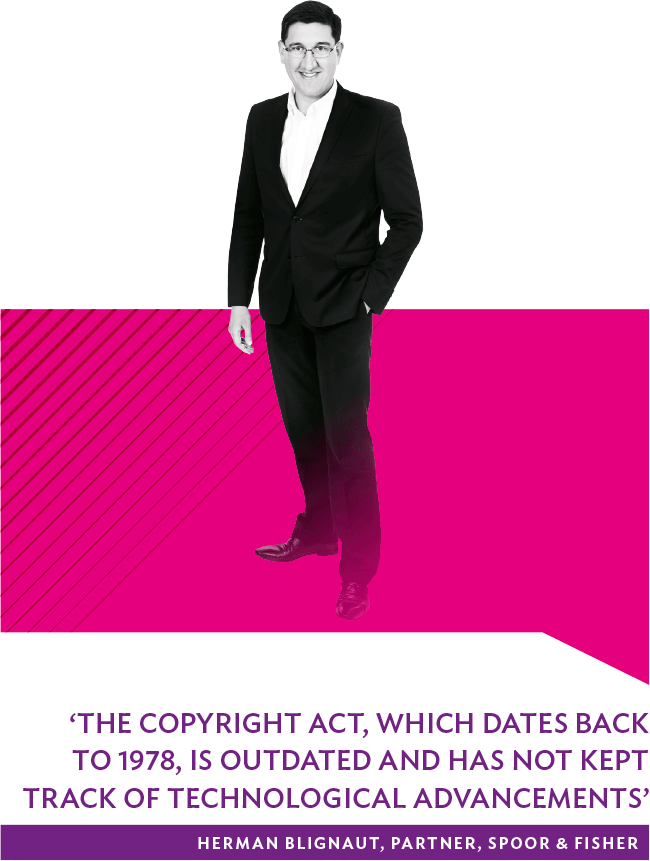 As far as patents go, in response to the publicacation of the first draft IP policy document, strong submissions were made questioning and condemning the granting of what were deemed ‘invalid’, ‘weak’ and ‘unworthy’ patents in respect of pharmaceutical inventions. ‘The primary basis of these attacks was the fact that the South African patent system is a so-called deposit system, i.e. patents are granted if all formal requirements are met, but no substantive examination in regard to the merit of the invention is carried out,’ says Du Plessis.

‘Furthermore, no provision is made in the current Patents Act for opposition to the grant of a patent. A patent can only be challenged and invalidated after grant, for example, by way of an application to court, or by way of a defence in the case of an infringement action.’

Given that no draft patent bill has as yet been published, it is difficult to predict what changes might be put forward.

Commenting on this, Blignaut says: ‘Over the next few years, SA will join the Madrid Protocol, where you can register your trademark through WIPO and designate the countries to which you want to extend that trademark. This process streamlines registration through one application giving protection in various countries. Trademark holders may consider this a positive development in some cases.’

Du Plessis stresses that functionally effective protection systems for IP are extremely important. ‘This means that any changes to the IP laws of South Africa to ensure that its laws and protection systems are aligned with the best in other countries must be supported and, indeed, welcomed. However, at the same time, it is essential that any changes made to the IP laws and systems must be progressive, legally justifiable and practically feasible.’

Blignaut expresses reservations about the necessary changes to SA’s IP laws actually taking place. ‘I don’t have the most faith that this will get done,’ he says. ‘A concern is that generally it seems that pursuing political agendas may be more important than attending to amendments that are well overdue and direly needed.’