THE MORE THE MERRIER - JSE MAGAZINE

Diverse financial investments help moderate growth in an economy and aid a country to be more self-sufficient and less impacted by currency movements. The more diversified, the greater the opportunity to attract long-term foreign direct investments.

‘Increasing financial sophistication is crucial for enhancing growth,’ says Izak Odendaal, investment analyst at Old Mutual Wealth. He adds that part of the process of becoming more sophisticated is the introduction of new instruments. ‘At its most simple level, capital markets perform two roles: to allow savers the ability to grow wealth and manage risk, and to allow companies to raise funding for growth.

‘These companies might themselves have risk management needs (i.e. hedging currency fluctuations) and thus use some of these financial instruments.’

According to Odendaal, SA compares well with other emerging markets in terms of the sophistication of its financial sector. Having deep and liquid bond markets also means that the SA government and companies can borrow in local currency, and thus not expose themselves to foreign exchange (FX) volatility risks. ‘It has often been termed the “original sin” of emerging markets – that they have to borrow in dollars or euros, and are then massively exposed to FX volatility,’ says Odendaal.

Andrew Gillespie of Tradition Futures, a specialist JSE broker, agrees. ‘Irrespective of the market or country, be it via private equity, listed equity, fixed income or underlying trade and capital flows, managing FX volatility and risk is a constant feature of the evaluation process in Africa,’ he says. ‘For most participants, it is often a frustrating, opaque and expensive exercise, often prohibitively so.

‘As a result, African FX risk, be it directly or indirectly, is often unhedged, to the detriment of capital and investment projects, as well as the investment and growth prospects for the continent.’

However, as Africa’s financial markets continue to evolve, new tools and instruments are becoming available to hedge some of these FX risks efficiently. The JSE listed three African FX futures on their Currency Derivatives division in 2014. The Nigerian naira, Kenyan shilling and Zambian kwacha made their debut on the exchange, alongside 12 other currency contracts already traded on the JSE.

‘For the first time, participants wishing to hedge out African FX risk – be they bond, equity or real economy agents in these three currencies or countries – now have an independent, well-regulated, transparent platform to do so, irrespective of domicile or size in African FX futures,’ says Gillespie. ‘This allows for a level and fair playing field, where the best price is available to all, without bias or favour, which is a significant facet and feature of this market in African foreign exchange on the JSE, as the exchange stands in-between all counterparties and transactions, and acts as guarantor of these trades.’ 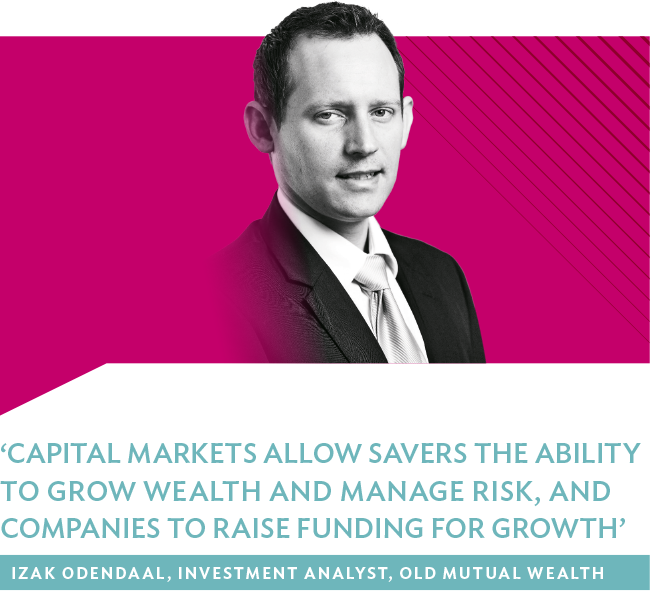 Well-functioning capital markets can also attract money into an economy. Most experts point out that there is a good correlation between available financial products and investment. In short: exchanges with more listings tend to have higher trade. Apart from the above mentioned currency derivatives, among Africa’s newer investment instruments are real estate investment trusts (REITs), exchange traded funds (ETFs) and other types of derivatives.

A REIT is a company or collective investment vehicle that owns or finances income-producing real estate. There are three primary types of REITs, namely equity, mortgage and hybrid. Investors gain through capital appreciation and rental income, with the latter distributed annually to unit holders.

REITs generally pay out all of their taxable income as dividends to shareholders. Modelled after mutual funds, REITs provide investors with regular income streams, diversification and capital appreciation.

In most of Africa, the absence of enabling legislation has somewhat limited the growth of the REIT market. SA has traded in REITs for the last 10 years, while Ghana and Nigeria have had access to REITs since 1994 and 2007 respectively.

October 2015 saw the Nairobi Securities Exchange officially launch the Kenyan REITs market, as well as open the Stanlib Fahari I-REIT public offer. (The latter then closed on 12 November and was subsequently listed on the bourse.)

At the opening, CEO of the Nairobi Securities Exchange Geoffrey Odundo said: ‘The launch of REITs further enhances financial inclusion in our capital markets as average investors will now be able to invest in large-scale commercial, residential and industrial properties, without requiring large sums of money.’

ETFs are listed investment products that track the performance of a group of shares, bonds or commodities. ETFs are only written off specific index-related securities listed on a stock exchange, which makes it possible to invest in a diverse range of securities through a single exchange-traded product. Having shown huge growth since the 2008 global financial crisis, ETFs investments now stand at noteworthy levels – a report by UK research group ETFGI stated that by the end of November 2015, the industry managed a record $3 trillion, from 275 providers listed on 63 exchanges in 51 countries.

The many benefits of ETFs, as well as the fact that they could potentially promote the development of the continent’s financial markets through diversification, makes them ideal products for local and global investors in Africa.

The JSE – sub-Saharan Africa’s biggest exchange by market value – has offered ETFs since 2000. In August 2015, the JSE, Nigerian Stock Exchange and Nairobi Securities Exchange – the latter two being sub-Saharan Africa’s second- and third-largest exchanges respectively – discussed a collaboration. They believed this would improve liquidity on the continent’s exchanges and result in increased ETF cross-listings on the larger bourses. 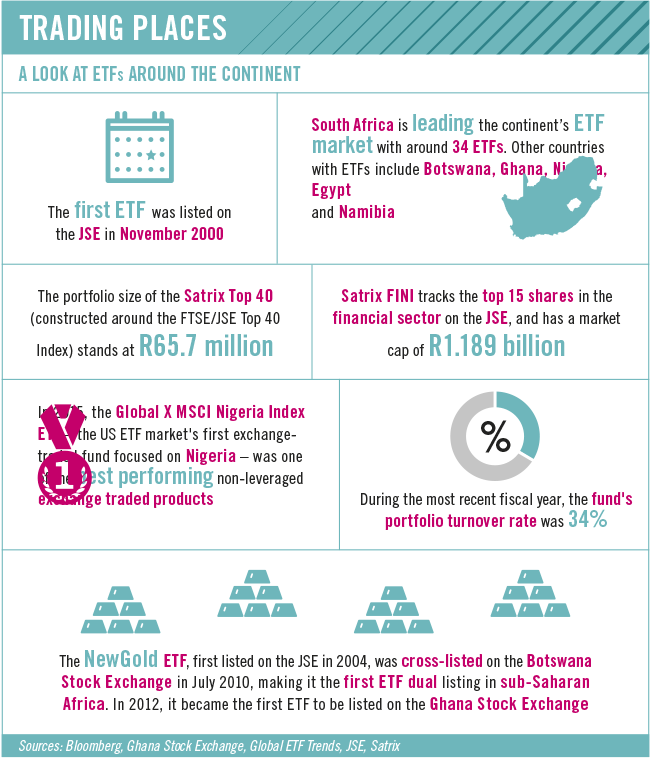 Donna Oosthuyse, Director of Capital Markets at the JSE, says that by collaborating with Africa’s largest stock exchanges, the JSE hopes to spearhead the trend of ETFs in Africa.

According to the JSE, the concept of cross-listing an ETF is no different to cross-listing a share, or listing it on more than one exchange. By cross-listing ETFs on African exchanges, investors will be given access to liquid company shares tracked by indices such as the FTSE/JSE Top 40, FTSE/NSE Kenya 15 Index and MSCI Nigeria.

The cross-listing of ETFs fulfils two main purposes. Firstly, investors have exposure to a diverse range of top-performing Nigerian, Kenyan and SA companies in a convenient and cost-effective way. Secondly, it improves the liquidity of Africa’s largest stock exchanges.

The advantages for companies included in the ETF indices – and for the exchanges in their countries – are that ETFs need to be ‘fully covered’, says Oosthuyse. ‘This means that the asset manager who is managing the ETF portfolio has to buy and sell the underlying shares on the home exchange, depending on the activity of buying and selling of the ETF.

‘If an ETF from Kenya or Nigeria – for instance – is listed on the JSE, then the asset manager in Kenya or Nigeria has to buy and sell the constituent shares on the home market, as units in the ETF are bought and sold. This drives liquidity in the home market. In addition to this, it provides extra visibility on the shares on that exchange to new investors who in all likelihood don’t yet trade on that market,’ she says.

A derivative is a security with a price that is dependent on or derived from one or more underlying asset. Its value is determined by fluctuations in the underlying asset. It is controlled from a central exchange where specified commodities are traded at specific prices and times.

While the JSE has had a derivatives market for some time, the Nairobi Securities Exchange and Nigerian Stock Exchange are working on this – the Kenyan bourse being more advanced in this regard.

Reports reveal that both local and foreign investors with an eye on Kenya’s derivatives market should be able to hedge currencies and stock market prices very soon. This is due to the Nairobi Securities Exchange having said it will open the derivatives market with stocks and currencies up for betting by April this year.

It’s expected that figures of between KSh5 million and KSh10 million will be generated in the first year of the derivatives’ operation.

According to Odundo, it is ‘very encouraging’ to see that investors will soon start trading and clearing derivative securities through the exchange.

The Nigerian Stock Exchange currently trades in equities (including REITs), bonds and ETFs. Until 2013, Nigeria’s equities market was one of the world’s best-performing frontier markets, although low liquidity levels and currency restrictions have since deterred foreign investors.

Oscar Onyema, Nigerian Stock Exchange CEO, was quoted in the Nigerian media earlier this year as saying that a priority item for this year is to establish a derivatives market, which together with demutualising the Nigerian bourse and monetising service suites should lead to an increase in the number of new listings across five key asset classes.

He says that the exchange might also begin trading naira futures by the end of 2017, which he believes will help investors hedge against movements in the local currency and also diversify the exchange offering into forex.

The bottom line is that diverse investments do well to help economies grow. ‘The better capital markets function, the easier it is for companies to fund growth,’ says Odendaal.