Pros and cons of apps that run our lives

Quick: how many apps do you have on your smartphone? A dozen? Maybe 30? Go through the list – WhatsApp, Outlook, Facebook, Uber, browser, banking app, Pokémon GO (wait, how did that get there?) – and you’ll be surprised how many apps you’ve downloaded over the years. The average consumer in the US, South Korea, Japan and Australia has more than 100 apps on their phone. You’re probably not too far off that haul yourself.

About 200 billion were downloaded globally in 2018, and research firm Statista expects that number to reach almost 260 billion in 2022 – especially if the Windows Store and Amazon Appstore gain traction. Worldwide, mobile consumer spending on Apple’s App Store and Google Play (the two biggest distribution channels for mobile apps) continues to grow, reaching $21.9 billion in value during Q3 2019 alone, according to data released by Sensor Tower. The same report found that 8.7 billion apps were downloaded from Google Play during the quarter, added to about 2.4 billion from the App Store. (There’s a simple reason for that difference: Google Play offers far more free apps than Apple.)

That activity isn’t coming entirely from mobile-obsessed millennials, or from time-wasting teens who’re playing games such as Subway Surfers or Call of Duty: Mobile. In fact, App Annie’s the State of Mobile 2019 report found that Gen Z (people aged 16 to 24) engage more on average with their most used non-gaming apps than mobile phone users aged 25 and older. ‘Specifically, Gen Z spends 20% more time and engages with their most-used apps 30% more often than the rest of the population,’ the report points out. Meanwhile, those aged 25 and older spend 75% more time each month on their most used games and access them 50% more often.

No, the bulk of mobile phone activity – reflected by the volumes of downloads – comes through social media and messaging apps. ‘Half of time spent on mobile globally was in social and communication category apps in 2018,’ the App Annie report confirms. ‘Among the most used social and communication apps globally, WhatsApp Messenger topped the chart for per user engagement in 2018, measured by average monthly sessions per user. This illustrates the historical demand for free calls and messages, a simple user interface, ease of use to add contacts, and interest in encrypted messaging. As a result, WhatsApp has benefited greatly from the network effect over time.’

Snapchat, meanwhile, ranked as the top social and communication app in France, the US and Australia, underlining how important photos and videos are in modern communication. ‘Video has become an expected feature for many social and messaging apps,’ the App Annie report states. ‘Whether surfacing as live streaming, video calling or viewing short-form video, apps such as Instagram, Snapchat and Tik Tok have leveraged video in a one-to-one or one-to-many mode to foster deeper engagement, particularly for Gen Z.’ 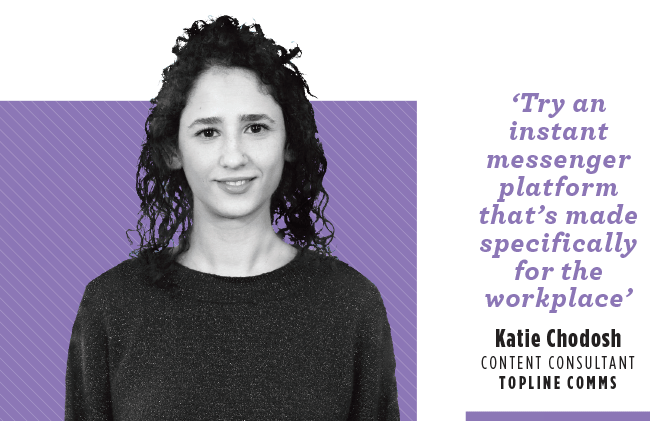 If you can’t imagine connecting with clients or colleagues via Snapchat’s filtered videos, consider this: mobile dating apps such as Tinder and Bumble have, says App Annie, ‘moved beyond purely romantic interests to include friending and business connections’.

No wonder, then, that enterprise messaging apps Microsoft Teams and Slack are embroiled in such a fierce battle for market share. In November 2019 Microsoft announced that Teams had grown to 20 million daily active users, up more than 50% from 13 million in June. Just a day later, Slack’s share price dropped 11% amid investor concern over its long-term ability to compete with Microsoft. Slack (which reported 12 million daily active users in September) sniped back, insisting that Microsoft’s figures were inflated and that many users only used Teams occasionally. Slack says its paid users spend nine hours per workday connected to the app, and 90 minutes actively using it.

The Teams vs Slack battle is, ultimately, a fight over which app will end up running your work life. ‘Staff shouldn’t have to use their personal messenger apps to talk to colleagues,’ says Katie Chodosh, content consultant at digital PR agency TopLine Comms. ‘Instead, try an instant messenger platform that’s made specifically for the workplace – that way you’ll keep work chat on a work channel. Instant messengers made for the workplace, like Slack, let you make calls, create a specific channel for a specific discussion and can make groups private too.’ Chodosh adds that task-management apps – also known as collaborative work management software – are the new and improved digital task lists. ‘They make it easy to see who is responsible for what, the deadlines everyone is working towards and creates accountability for actions. It’s easy to understand everyone’s workload, so you’ll be more mindful about who you assign work to. Options include Wrike, Asana and Trello, all at different price points and slightly different features. Most will let you conduct a free trial, so you can see which one works best for you.’

Go through your smartphone apps again, and you’re likely to find apps that take care of every imaginable aspect of your life. Want to send a quick message? There’s WhatsApp, Facebook Messenger or even Snapchat, if you’re feeling creative. Want to escape or catch up on your social media? Just open Instagram or Facebook. Stuck in a queue and want to play a quick game? Say hello to Angry Birds, Fifa Mobile, Mario Kart Tour or any one of the millions of games available. Want some ‘you’ time? Showmax, YouTube, DStv Now, Spotify, Netflix … the list goes on. Want to track your health? Go to the Virgin Active app, and remember to sync your fitness tracker through the Garmin app before checking your Vitality points on the Discovery app, and then use SnapScan or Zapper to buy a smoothie on the way out of the gym. Banking. News. File transfers. Translation. Like the old meme goes: there’s an app for that. 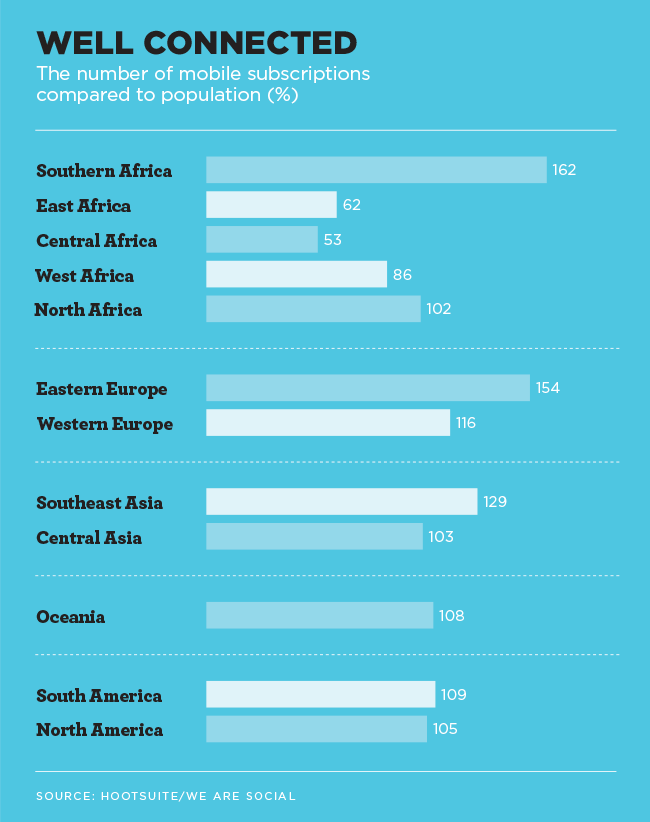 But amid all the excitement about apps that help you manage your life, it’s worth recalling the workplace warning sounded in a 2017 survey by Harmon.ie. The resulting report – titled, ominously, the False Promise of the App Economy – warns that ‘the so-called digital transformation of the workplace is generally seen as an opportunity for organisations to boost productivity and employee engagement by providing better tools and working conditions. However, introducing new apps (mobile or desktop) comes with its own problems. As a start, each requires its own password, needs to be managed and can cost money on a subscription basis per user. In many cases, training may be required as each new app works slightly differently, introducing new functionality – new ways of searching, sharing and saving – and new interfaces’.

The survey found that 48% of people were using apps that weren’t given out by their IT department (WhatsApp and Dropbox were ‘regularly mentioned’); and that 34% somewhat agreed that they had to switch between too many apps just to get basic work done (a further 9% said they ‘totally agree’.)

In a post on CMS Wire, LumApps CEO Sébastien Ricard warns that app fatigue at work is killing productivity. ‘The average employee in 2018 used 28 different apps just to complete basic tasks, and almost three-quarters of employees surveyed in 2017 reported working with at least five apps open simultaneously. Additionally, according to the 2018 research from RingCentral, most workers toggle between apps up to 10 times every hour, which means that companies are losing up to 32 days of productive work per employee every year. Can you afford to miss out on a month of productive work every year?’

To further complicate the situation, ‘most workers are expected to respond to new communications and notifications on workplace apps immediately, which creates even more confusion and interruptions throughout the day on top of the existing app fatigue’.

It’s unclear how much of that workplace app fatigue comes from the sheer volume of apps, or from confusion about managers’ general inability to pick a lane when it comes to team communications. Are tasks tracked in face-to-face meetings, in Teams, on the team WhatsApp group, on cloud-based spreadsheets, or via one-liner Reply All emails?

It’s a question worth asking, because the global appetite for apps remains as strong as ever. ‘Consumers spent $101 billion on apps globally in 2018,’ Danielle Levitas, App Annie’s executive vice-president of global marketing and insights, said on the release of the State of Mobile report. ‘This is larger than the global live and recorded music industry, double the size of the global sneaker market, and nearly three times the size of the oral care industry. Mobile experiences are so central to how we live, work and play, and with consumers spending three hours a day on mobile, it’s clear how vital this platform is for all businesses in 2019 and beyond.’ And – despite the warnings – app users don’t seem to be showing any signs of exhaustion just yet.