A load to bear - JSE MAGAZINE

Metropolitan, a division of JSE-listed MMI Holdings, has a large office building in Durbanville, just north of Cape Town. To highlight the company’s brand identity, Metropolitan worked with Solid State Lighting International (SSLI) to replace the mercury vapour (MV) 400W mono white floodlights that illuminated the building’s facade, with a dynamic colour-changing LED solution. ‘Metropolitan wanted to enhance the lighting aesthetic and appeal of the architectural lighting of its Durbanville campus,’ says SSLI CEO Ross Blakeway. ‘By doing so, the company aimed to ensure the desired impact on its customer facilities in order to improve the customer experience at that particular touchpoint.’ Tonight, if you drive past the Metropolitan campus off Durban Road, you’ll see it bathed in a striking blue wash of light, provided by seven Philips VAYA LED floodlights.

It looks beautiful, which is exactly what Metropolitan wanted. But the LEDs are also far more cost-effective and energy-efficient. Whereas the five old MV floods consumed a combined 2 kWh, the seven new LEDS use about a quarter of that total (476 Wh), bringing about a 75% reduction in energy usage.

A similar story could be told about office buildings across SA, where smart energy solutions are powering a nationwide shift towards efficient, ‘green’ energy. And it’s not just the big, listed companies. As shared workspace provider Cube Workspace outlines in a recent blog post, ‘in most of our workspaces we have motion sensor lights where the lights will switch on when there is movement detected in that area. The moment there is no movement, the lights automatically switch off and help reduce our electrical consumption’. Taking things a step further, Cube Workspace also purchases customised pens that are made from eco-friendly products.

Energy savings – and the cost savings that come with that – are becoming an increasingly important part of businesses’ budgets and bottom lines. The value of that greenward shift was underlined again in late 2018, when ‘Stage 1’ and ‘Stage 2’ entered the countrywide conversation again as the national grid was hit by rounds of disruptive load-shedding. ‘We continue to appeal to residents and businesses to use electricity sparingly during this period,’ Eskom said in a statement at the time. ‘Please switch off geysers as well as all non-essential lighting and electricity appliances to assist in reducing demand.’ 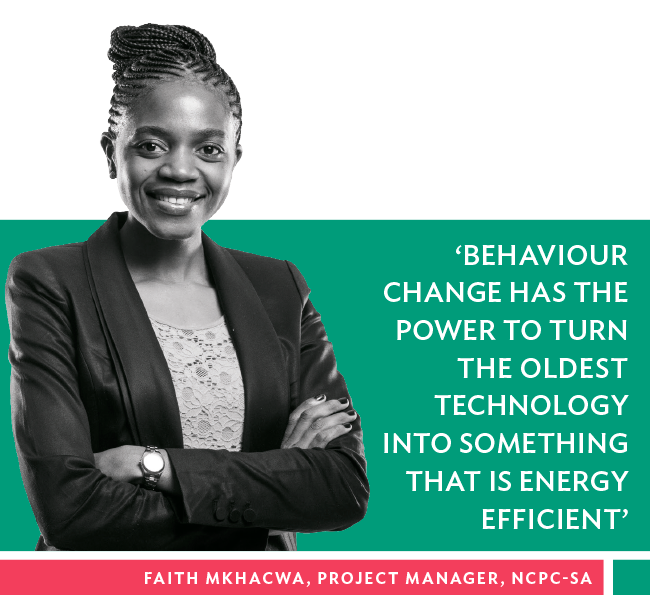 Businesses that had implemented energy-saving smart building solutions were a step ahead. At the Sandton offices of listed insurer Old Mutual, for example, the office blinds are pre-programmed to open and close as the sun passes overhead, allowing the interior space to optimise its use of natural light. Meanwhile meeting rooms throughout Mutual Place have automated overhead lights that switch on when the room is occupied, and off when the room is empty.

Elsewhere, at 78 Corlett Drive in Melrose North, SA’s highest-rated green building of 2018 boasts a carbon-neutral design with recharging facilities for electric vehicles and energy-efficient lights that are programmed not to surpass a pre-determined maximum energy level. ‘We placed the offices at the outer edge of the building, maximising the use of natural light and ventilation. Some 86% of our offices have natural light and ventilation,’ says Roger Brookes, projects director at developer Legaro.

Energy-efficient exterior and interior lighting is now becoming a standard feature of big business premises across SA. But there’s another cost-saving, energy-reducing opportunity that often goes overlooked: the machines and equipment that power the work being done inside those buildings. During times of load-shedding, much of the attention is focused on residential electricity spend, looking at appliances such as geysers (which, according to Eskom estimates, make up as much as 39% of SA consumers’ monthly energy usage), stoves and ovens (7%) and, of course, lights (6%).

Speaking during a previous round of load-shedding, at an energy efficiency workshop hosted by the South African Industrial Energy Efficiency Project, NCPC-SA project manager Faith Mkhacwa said that 20% of the energy South Africans currently consume can be saved through easy and inexpensive behaviour changes. ‘Behaviour change has the power to turn the newest energy technology into wasted money, and it can turn the oldest, most outdated technology into something that is energy efficient,’ she said. More recently, in mid-2018, Energy Minister Jeff Radebe announced the launch of an appliance energy calculator mobile app that helps consumers estimate the running costs of various appliances before they make a purchase. 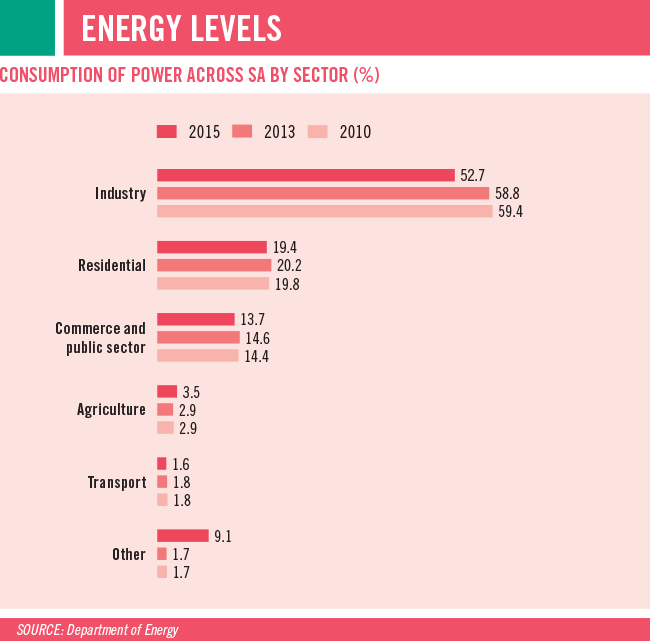 Like residential consumers, businesses have similar power-hungry appliances: HVAC systems, printers and computers, along with the odd office canteen microwave or dishwasher. Data centres could be added to that list, too. Historically, most data centres have relied on fossil fuels for their energy generation, but as Sameer Cassim, R&D systems architect at Internet Solutions, points out, many are now moving to alternative, renewable energy sources. ‘Air conditioning isn’t the only way of cooling a data centre,’ he says. ‘For instance, drawing outside air into the data centre and circulating it with the power of server fans provides free cooling. Conversely, extracting warm air from the data centre and redistributing the heated air to other parts of a building in colder months, provides near-free heating. Closed-loop liquid cooling and hot aisle containment provide additional cooling methods. We are seeing a shift from freezing data centres to “cool enough” facilities.’

For many offices, the biggest energy cost centres remain printers, air cons and lights. And in the age of digital signatures, emails and PDF documents, an argument could be made that the most energy-efficient office printer is no printer at all. That line of thinking recently prompted James Tooley, Cape Town branch leader at sustainable print solutions provider Green Office, to write a blog post with the provocative title, Will The Printer Industry Eventually Die? Tooley points to a slow decline of 2% per annum in office printer sales and a 1% decrease in office paper sales.

‘Businesses are becoming more aware of how much they print, and managed print services providers that assist with print reduction and hardware optimisation may also be diminishing the need for so many printers in the field,’ he writes. ‘Businesses are still very reliant on printing for their business processes, and it would appear that unless a top-down decision is made to reduce and ultimately eliminate print, office printing may be around for a very long time… Or will it?

‘The growth of business process optimisation [BPO] and its implementation will also have a significant effect on print volumes in businesses. Document management systems that include biometrics, digital signatures, document security and general digitalisation will in time affect the printer industry. It’s really just a case of how quickly BPO grows.’

That’s not to say that the printer industry will disappear quietly into the night. Epson recently launched its next-gen EcoTank ITS printers in SA, which promise to reduce office printing costs by 90% through high-yield inks and ultra-high-capacity ink tanks, and by not using toner cartridges. That’s significant, given that about 375 million empty ink and toner cartridges are disposed of every year (according to 2012 estimates published in the International Journal of Innovation).

‘Our original ink tank system broke away from printing conventions,’ Epson Europe product manager Mona Belle notes in a media statement. ‘It came with a substantial quantity of ink and removed the need for cartridges, thanks to an integrated ultra-high-capacity ink tank fitted to the side. The latest models continue to offer the same benefits to customers while also being even easier to use and more compact. There are now more models across the collection, which covers home, photo, home office and small office users.’

Samsung, meanwhile, has launched a range of office air conditioners that uses a system of micro-holes to spread air evenly throughout the room, maintaining a comfortable level of coolness without generating any draft. ‘Samsung’s wind-free technology offers a highly energy-efficient solution because not only does it ensure that the temperature is constant, [but] the digital inverter 8-pole consumes only 32% of the energy used by conventional air conditioners,’ says Mike van Lier, director of consumer electronics at Samsung South Africa.

As SA’s energy crisis remains a factor, those energy savings translate directly into cost savings for households and businesses. In late 2018, as load-shedding returned and businesses across the country were hit by power disruptions, reports emerged that Eskom asked the National Energy Regulator of South Africa (Nersa) to approve a 15% annual increase to electricity tariffs, starting from the new financial year, until 2022.

As electricity costs continue to increase, office managers across the country – in businesses of all sizes – will be paying particularly close attention to the energy requirements of the machines and equipment that hum away quietly in their offices.