THIS TIME IT'S PERSONAL - JSE MAGAZINE

For decades, sports fans have been watching what their heroes do with their feet. So there was a fair amount of interest when Manchester United superstar Paul Pogba – he of the £89 million transfer fee – was spotted arriving for training in a pair of exclusive white Adidas Yeezy Boost trainers, specially personalised with his initials. Pogba’s not the only one getting in on the hyper-personalisation game. Novak Djokovic turned heads at the 2016 Australian Open when he played – and won – his semi-final match in a pair of personalised royal blue Adidas Barricade Novak Pro trainers, with a picture of his own face stitched onto the tongue. The sports world (or, at least, the excitable part that resides on Twitter) lost its collective mind a year later when Djokovic’s 2017 Wimbledon semi-final opponent, Tomáš Berdych, took to the court wearing a similar pair of shoes – with Djokovic’s face printed on them.

Mind you, if Berdych really wanted it, he could have had his own personalised Adidas gear – as could you. All you’d have had to do is visit the sportswear giant’s Knit For You pop-up shop in Berlin, where you could design, manufacture and buy a one-of-a-kind, customised merino wool sweater for €200. It’s a quick and simple process, powered by hugely sophisticated technology. First you enter a darkened room, where a range of patterns are projected onto your chest. Then you wave your hands to choose your favourite, and adjust the colour combinations on a nearby touchscreen. You then either select from the standard small/medium/large sizing, or – to get the perfect fit – strip down to your underwear for a perfectly personalised 3D laser scan fitting. Confirm your order, and your sweater will be knitted, cleaned, dried and packaged for pickup within four hours.

Knit For You was a PR stunt, but an effective one – today’s consumers are demanding an increasingly personalised relationship with their favourite brands, and technology now exists to make that happen. You’ve already experienced it yourself, whether in your personalised Netflix account recommendations (‘because you added Stranger Things to your list…’), or in your Amazon shopping experience (‘more top picks for you…’), or in your email inbox (‘Hi [YOUR NAME]. Here is our latest mailer…’). 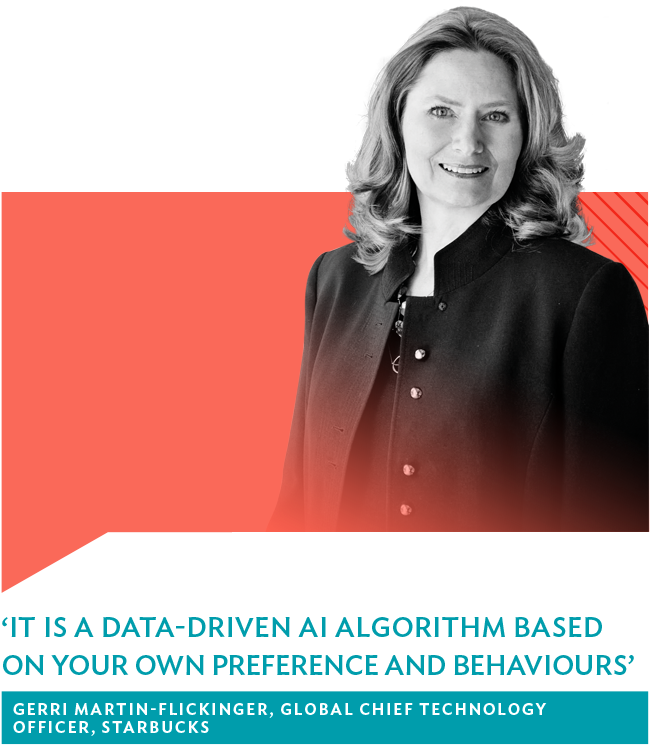 In a 2015 Deloitte survey, 36% of consumers said they were interested in personalised products or services. ‘Businesses have not only developed the capabilities to measure specifically what each individual consumer wants, they’re now in a position to link their processes and resources to provide it,’ Ben Perkins, head of consumer business research at Deloitte, said at the time.

Personalisation is nothing new – but today’s marketers can draw on the formidable strength of AI-powered, big data-driven analysis.

Recent developments at Starbucks demonstrate this trend. In January 2016, the coffee company produced a range of 30 weekly email newsletters that were based on data collected two weeks prior. By June, they had upgraded to a real-time engine that could create up to 400 000 different, custom-generated emails per week. In October they took it a step further, launching real-time, one-on-one, personalised email offers based on each customer’s unique behaviours and preferences. By the end of the year, those mailers were offering unique recommendations for customers, based on individualised data processed through a massively advanced, hyper-personalised algorithm.

‘It is not a single algorithm used across the entire population,’ Gerri Martin-Flickinger, global chief technology officer of Starbucks, told the company’s Investor Day. ‘It is a data-driven AI algorithm based on your own preference and behaviours.’ In fact, the data went even deeper than that. Martin-Flickinger’s presentation revealed that, for each customer, Starbucks had gathered information on the individual’s purchase history, product preferences and mobile app usage, plus third-party information as well as contextual data,   such as the customer’s location and the weather at the time of purchase. 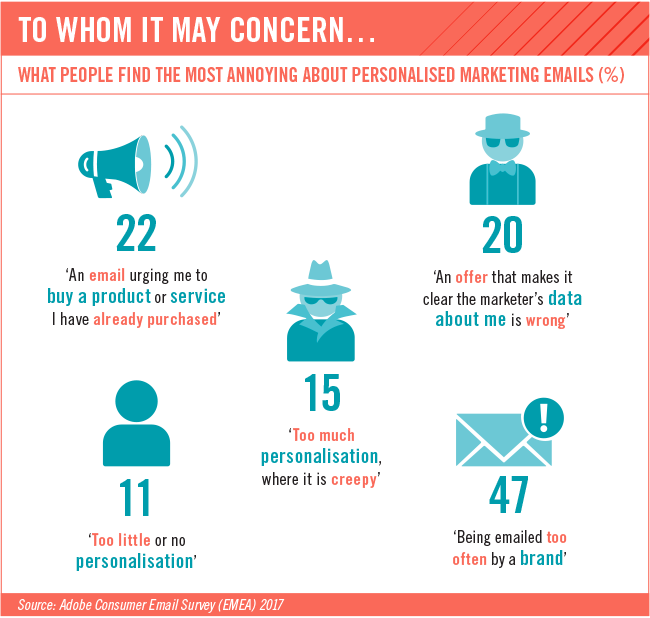 Why would Starbucks gather all that information, just to make sure your barista offers you a butter croissant (rather than, say, a chocolate muffin) to go with your java chip frappuccino? Quite simply, because they can… And because it works. The Investor Day presentation showed that Starbucks’ email personalisation and recommendation campaign had led to a doubling of email redemptions and a tripling of revenues from customers who redeemed the offers.

Coca-Cola enjoyed similar success with its game-changing global Share a Coke campaign. Share a Coke was a simple packaging idea that first launched in Australia in 2011 – when you grabbed a Coke bottle out of the fridge at your local café, you could choose from a variety of options until you found one that had your name printed on it. It sounds fairly straightforward, until you consider the work behind it all. In Europe, Coca-Cola produced close to 800 million personalised bottle labels in Q1 2013 alone, printing more than 10 000 names in 10 languages using five alphabets. In SA, when the campaign ran from September 2013 to February 2014, they printed approximately 600 names on 100 million personalised packaging labels.

All of that, just so that you can pick up a Coke can that says ‘Share a Coke with Abbi’. Or Bongi, or Chris, or any number of options. And if you couldn’t find a Coke can with your name on it, the brand’s SA marketing agency had a solution: a voice-activated vending machine that allowed consumers to print their hard-to-find name on 200 ml cans.

It was product personalisation at its most potent, and Coca-Cola enjoyed the results. In the US, the 2014 campaign brought the company unprecedented 19% year-on-year growth in its 590 ml packaging. In the UK, the 2016 campaign grew sales by 2.75%, increasing overall soft drink sales by 2%.

The campaign had become an annual staple of Coca-Cola’s worldwide marketing efforts, with the company harnessing increasingly complex AI and big data technology. In 2017, the US Share a Coke campaign recorded more than 1 000 unique jingles, based on 25 different original musical tracks, featuring all the first and last names (yes, they now do last names too) displayed on its bottles. The total roster of first names covers more than 800 options in the US alone, taking in more than 77% of the local population aged 13 to 34.

‘Personalisation isn’t a new phenomenon – people have been personalising products since the Dark Ages,’ Richard Askam, one of the consultants involved in the UK Share a Coke campaign, said in an interview with Packaging Europe. ‘What is new is the ability to put it on particular substrates. Share a Coke opened the door. But what we’ve seen so far is just the beginning. Sticking someone’s name on a product is only scratching the surface of the possibilities.

‘Personalisation has the capacity to make a real emotional connection – something like “You and I have been friends for 30 years… Do you remember this song we used to listen to?” Personalised products are a device to forge a direct relationship with the consumer, one that the brand owner used to outsource to the retailer. The brands that do the most innovative things today will be the big winners.’

Personalisation doesn’t necessarily mean hundreds of thousands of personalised products, according to Frauke Neuser, principal scientist at Olay, in a recent interview with Mobile Marketing. ‘I think personalisation more means helping someone find the right products and ingredients from what’s already out there.’ Neuser was speaking after the success of Olay’s AI-powered worldwide Olay Skin Advisor service, which helps women better understand their skin and find the best products for their personal skincare needs.

‘Right now, it’s a very straightforward process based on your skin age and how you answer the various questions,’ she says. ‘But we’re going to replace that with a piece of synaptic intelligence that we’ve worked on with an external partner so that piece of the experience becomes smarter over time too. That algorithm will not only be able to learn from, for example, how often women do press the “Buy It Now” button for a given product, but it will also be able to look at reviews and ratings of the different products on the internet, on Olay.com and with our retail partners.’

Like Starbucks, Olay is using big data and AI-powered algorithms to create bespoke solutions for consumers. But like Coca-Cola, and Adidas, and all the other pioneers of product personalisation, they’re using those solutions to build personal relationships with their customers while also boosting sales volumes. Ultimately, personalisation isn’t just about having your name on a bottle or your face on a shoe. It’s about how well your favourite brands know you – and how that relationship makes you feel.