In mid-2020 several members of Dewald Wentzel’s family were diagnosed with COVID-19. Wentzel’s 74-year-old father, whose chronic illnesses and co-morbidities put him in the high-risk category for severe illness, was among those who tested positive. Wentzel lives about 2 km away from the rest of the family, but the hard lockdown meant he couldn’t visit. ‘You can imagine the stress I was feeling knowing that this was happening to almost my entire family, and that I could not be there with them, to help them,’ he writes on the Discovery Health blog. ‘My biggest concern was for my father.’

Working through the medical-aid provider, Wentzel tracked down a pulse oximeter. A small, clamp-like device that fits comfortably over a fingertip (Wentzel describes it as resembling a finger puppet), the pulse oximeter quickly and painlessly measured his father’s oxygen-saturation levels. That allowed the family to monitor their father’s risk of silent hypoxia, a potentially deadly aspect of the coronavirus that causes a reduction in oxygen levels in the blood.

‘It’s called “silent” because you don’t realise that it’s happening – and that is the really dangerous part,’ says Wentzel. ‘You might not feel short of breath at all and only show symptoms when you’re actually already in a critical condition. But the pulse oximeter can tell you right away whether your oxygen saturation has fallen below 90%, in which case you’re in a danger zone, and can move to access medical help right away.’

Wentzel recalls feeling helpless, speaking to the family and hearing reports of his father’s worsening condition. ‘I’d immediately ask for the pulse oximeter readings. Knowing his oxygen saturation was fine meant he wasn’t in the danger zone despite the fact that he was fighting off COVID-19,’ he says.

Wentzel’s father went on to make a full recovery, but the family’s experience with the pulse oximeter provided a powerful example of how wearable technology is transforming the world of healthcare. 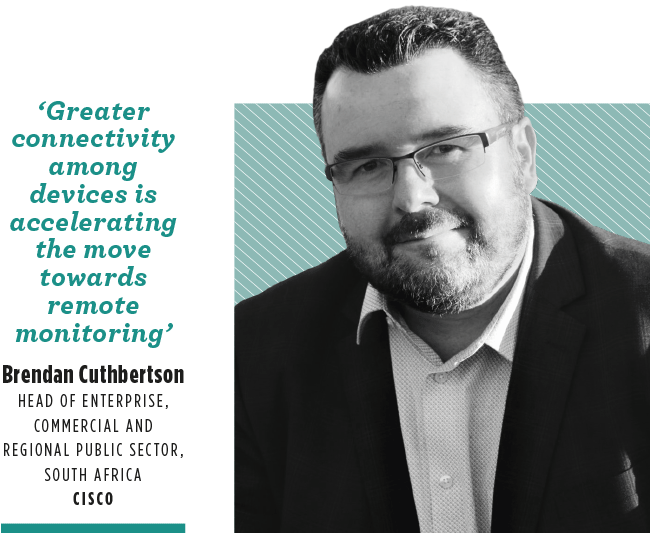 The technology had been building up for years, with a major early milestone coming in 2018 when the US Food and Drug Administration (FDA) cleared the Apple Watch Series 4 as a class II medical device. That was based on the device’s three heart-monitoring capabilities (including a low heart-rate alert, heart-rhythm detection and a personal ECG monitor) and its fall-detection feature.

Noting that falls are among the leading causes of injuries worldwide, Apple COO Jeff Williams said at the product launch that ‘whether you slip off a stepladder or trip on a kerb, a hard fall can be serious and it can be difficult to get immediate help’. The Apple Watch’s built-in accelerometer and gyroscope analyses the wearer’s wrist trajectory and impact acceleration to determine when a fall occurs – and if the wearer is immobile for one minute after the fall, it sends an SOS message with their location to their emergency contacts.

The technology is remarkable; even more so when one considers that it is now four years old. Since then, the market for consumer health and wellness wearable devices has grown exponentially. Deloitte Global predicts that 320 million health-related wearables will ship worldwide in 2022, with that figure likely to reach nearly 440 million units by 2024 as ‘new offerings hit the market and more healthcare providers become comfortable with using them’.

Deloitte’s analysts include both smartwatches (marketed to and purchased by consumers) and medical-grade wearables (prescribed by healthcare professionals, but increasingly available as off-the-shelf purchases) in those numbers.

When it comes to smartwatches and fitness trackers, the most common uses have historically been to help people get fit, lose weight and keep track of their race-day personal bests. But, the Deloitte report notes, ‘increasingly, people are using smartwatches to monitor their health, not just their running pace, as new hardware, software and apps have turned them into personalised health clinics’.

The depth of data is remarkable. A 2022 study by researchers at Penn State University in the US demonstrates how a specialised ankle bracelet can detect alcohol concentration from imperceptible amounts of sweat, helping researchers better understand how drinking might lead to negative consequences.

‘By using wearable technology to predict alcohol-related consequences – which range from automobile accidents to hangovers to missing work to sexual assault and beyond – we can begin to prevent alcohol-related consequences,’ says study lead Michael Russell. ‘Our research shows that wearable sensors can be used to help people understand when their drinking is becoming risky.’

In fact, wearables are supplying so much information that some doctors don’t quite know where to start with it.

‘The amount of data that we were getting for each patient, we were starting to wonder: how can we see through all that data?’ Alexandre Chan, professor of clinical pharmacy at University of California, Irvine, recently told Health IT Analytics. ‘Especially because with this sort of big data related to trackers, it’s not as straightforward… We are getting data almost every second, every minute or so. So we need to make sure that there’s a way we can clean up data.’ Chan and his team hope to solve that problem by developing a framework for standardising wearables data reporting and validation. Their work was published in the International Journal of Medicine Informatics in March.

And that’s just the start of it. As the technology advances, wearables will give healthcare providers a wealth of insight into patients’ general and highly specific well-being – and all of it remotely. As Brendan Cuthbertson, Cisco’s head of enterprise, commercial and regional public sector South Africa, recently told the Mail & Guardian, ‘greater connectivity among devices is accelerating the move towards remote monitoring, where patients are able to send data from their wearables and other remote-monitoring devices directly to their doctors in real-time, enabling a much more convenient, seamless, personalised patient experience’.

Wearables hold enormous potential for remote healthcare; the problem, however, lies in the wearers who are wearing them. A landmark survey published by Software Advice in 2022 tracked the experiences of more than 450 US patients who had been prescribed wearables by their doctors. It found that while 86% of those patients felt the devices had improved their clinical outcomes and quality of life, a similarly high percentage (87%) said the devices had given them inaccurate information. 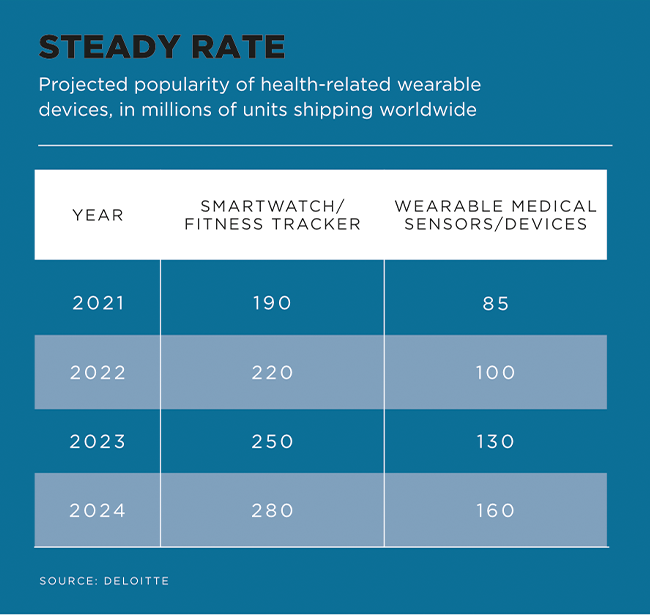 ‘Let’s be very clear,’ the report states. ‘Even patients who have problems with their medical wearables still appreciate them. When we asked patients what the biggest benefits of their wearable technology are, the number one response [according to 49% of respondents] was that it gave them a better understanding of their own health.’

One respondent, a 63-year-old woman with uncontrolled Type 2 diabetes, shared her experience of using a FreeStyle Libre 14-day flash glucose-monitoring system. ‘I am more aware of the ongoing trends of my blood glucose,’ she said. ‘With finger sticks, I am only able to see the immediate level. With [my device], I have the ability to follow a trend. I am able to follow how other variables [exercise, stress, illness] in addition to food intake impact the reading.’

The inaccurate data remains a problem, though – and it’s significant that the 87% of patients whose wearable devices had recorded inaccurate information, had entered that data themselves. Of those, 85% said the error had occurred because they struggled to understand the device’s user interface.

Patients across the board preferred using commercial devices (like Apple Watch or Fitbit) to medically prescribed devices; with the former beating the latter by 43% to 9% when it came to ease of use. (The balance said the two were about the same.)

‘Almost half of providers rely on remote patient-monitoring tools or wearable devices to some degree, which means this technology is already incredibly common,’ Software Advice’s report adds. ‘And with the rise in popularity of remote patient monitoring and digital health, it will only become more so.’

And as that happens – as smartwatches advance from fitness trackers and Park Run timekeepers to blood glucose monitors and pulse oximeters – the accuracy and depth of data will only increase… And doctors treating remote patients will have far more reliable and instant information to work with.