The key moment in the relationship between SA and the Republic of Korea (ROK) was the official state visit by then President Nelson Mandela to the Asian country in 1995. Mandela was in the ROK capital Seoul to accept a doctorate from Seoul National University.

In his acceptance speech, Mandela referred to the two countries having conducted ‘a common pilgrimage through the blast furnace of struggle’, and stated his delight that ‘both countries are free from colonial domination and repression’. This was the moment that legitimised the expansion of ROK multi-national companies into post-apartheid SA.

Martyn Davies, MD of emerging markets and Africa at Deloitte in SA, who spent two years as a post-doctoral student in Seoul, argues that the expansion of ROK companies into SA was part of a global strategy at the time. ‘Korea had established their large family-based manufacturing companies with state support. In the 1990s, these companies – known as Chaebols (“rich families”) – started to internationalise.’

The first step for ROK companies was into emerging markets. ‘South Africa was in their sights, alongside Eastern Europe, the Middle East and Latin America,’ says Davies. ‘Their strategy was to build market share and gain beachheads. In many ways they replaced German and Japanese companies, like Sony and Telefunken, in these markets. Ironically, what Japan did in the 1960s, ROK did in the 1990s, to some extent displacing Japan.’

Hyundai South Africa was formed in 1999, building on a network based on a short-lived project to import and assemble saloon car kits in Botswana. Electronics company Samsung founded its SA operation in 1994, while LG Electronics entered the market in 1997. Alongside this was a huge expansion of construction and engineering firms into Africa generally. Most major chaebols had engineering arms (Hyundai Heavy Industries, Doosan Engineering and Construction, Samsung Engineering, SsangYong Group), which found work all over the continent.

‘ROK construction firms were especially active in Morocco, Algeria, Egypt and previously Libya but also elsewhere on the continent,’ says Davies. In 2020, Daewoo Engineering and Construction completed the Kazungula bridge between Botswana and Zambia. At 923m long and 18.5m wide, it has been acclaimed as one of the largest engineering projects of its type in Southern Africa. If the planned one-stop border post functions efficiently, this new route has the potential to displace and hence resolve the land-freight bottleneck at Beitbridge on the SA-Zimbabwe border.

There are many parallels between SA and the ROK. Korea, as a whole, was colonised by Japan until 1945; subsequently the ROK endured both a brutal civil war (1950 to 1953) and a turbulent period of military rule until 1987. But even under military rule, the basic shape of an industrial giant was emerging. By democratisation, the ROK was well on its way to dominance in consumer electronics as well as a huge presence in telecoms, shipbuilding, steel and engineering. 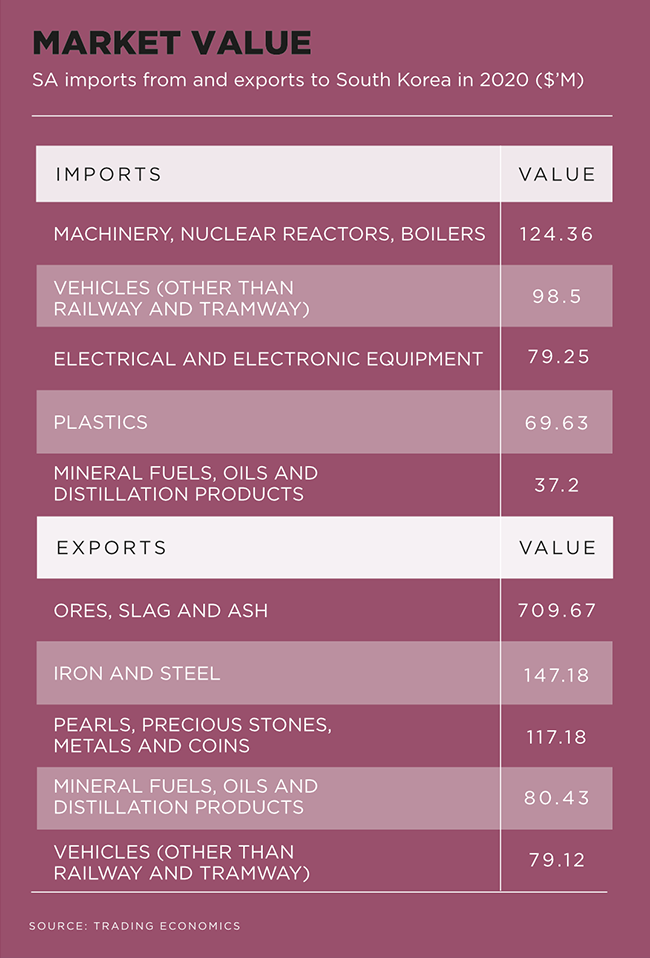 Saemoon Yoon, community lead, technological pioneers, at the WEF, notes that in the 1950s, ‘South Korea [as the ROK is often informally called] was one of the poorest countries in the world and had to rebuild its economy from scratch’. The country’s ‘extraordinary economic growth since then has become known as “the miracle on the river Han”’.

Davies agrees. ‘The ROK went from a basket case to a First World country in a generation,’ he says. The country is today the world’s seventh-largest exporter of goods and its ninth-largest importer.

Korea has a population of 52 million, which puts it in approximately the same size category as SA (59 million). The big difference is that ROK has virtually no natural resources. ‘The only asset Korea had to rely on was its people. The country’s number one focus was to elevate education, and within just 10 years, following the Korean war, illiteracy plummeted from 78% to 4%,’ says Yoon. However, he adds, education was not all there was to ROK’s economic surge. ‘In parallel with education, the country put all its efforts into maximising export products.’

The process started with simple items such as garments, fibre and footwear, with plywood and wigs the country’s leading exports in the late 1960s and early 1970s.

ROK companies in SA tend to limit their exposure to the local manufacturing sector. The two electronics companies have essentially established assembly plants rather than full manufacturing operations.

LG established its first assembly plant in Johannesburg in 2011 and a second in Durban in 2020. Samsung established a television-manufacturing facility at Dube Trade Port, north of Durban in 2014. Each company employs about 200 South Africans at its plants. These numbers belie the importance of these companies, which are the biggest in the SA electronic goods sector. Samsung dominates mobile devices with a 45% share of the SA market.

Today Hyundai is SA’s fourth-best-selling automotive brand, while another ROK product, Kia, is seventh. But unlike the other big-selling local auto companies (Volkswagen, Toyota, Ford and Nissan), the Korean cars are not made in SA. The brands are owned by a JSE-listed company, Motus, which was sold out of the Imperial Group in 2018 and imports almost all vehicles sold under these brands in SA. Illustrating the truly international reach of the automotive manufacturing industry, most are in fact made in Chennai, India. 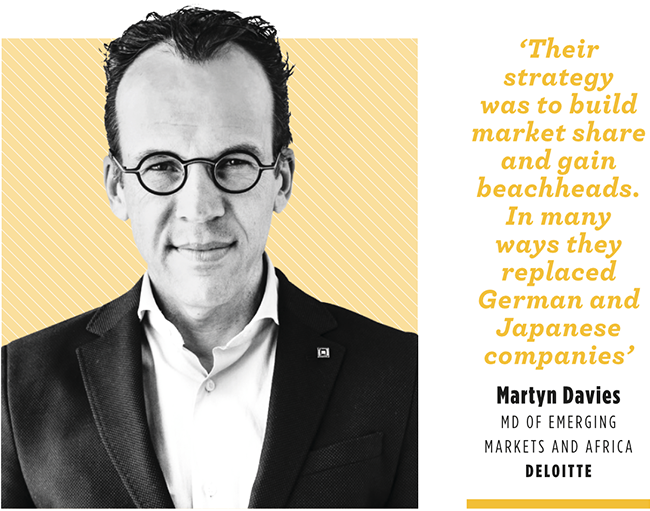 Motus has said it would love to build in SA (especially the Hyundai brand), and has even suggested founding a multi-brand assembly plant in East London. But the head office, in Seoul, likes to own its subsidiaries in outright. ‘We continue to raise the issue with Korea,’ says Motus executive Niall Lynch. He notes, however, that ‘because we are merely an importer and distributor, we are not a priority. In any case they currently have plenty of spare capacity overseas’.

Local automobile manufacturing would bring greater balance to the trade relationship between ROK and SA. At present, the latter exports almost exclusively raw or semi-processed minerals (iron, steel, platinum and coal) to ROK while receiving manufactured goods in return. ROK is SA’s fourth-biggest trading partner in Asia (behind China, India and Japan) while SA remains the ROK’s biggest African market.

This would suit Motus, too. ‘As an importer, Motus is wholly at the mercy of the exchange rate,’ says Lynch. If the firm was to manufacture automobiles for both the local and international markets, this would provide a built-in hedge against exchange-rate fluctuations.

The 1995 visit was not the end of Nelson Mandela’s involvement in ROK. He visited again in 2001 after his retirement to meet fellow Nobel Laureate President Kim Dae-jung. The relationship between Mandela and Kim – who had been honoured for his efforts to end 50-years of Cold War hostility between the ROK and North Korea – was ongoing. Mandela had given Kim the wristwatch he had worn during his years in prison as a good luck gift. Kim’s victory in the 1997 election marked the first time a peaceful transfer to an opposition party had happened in Korean history.

In 2022, a similar transfer has occurred in the ROK, with the victory of Yoon Suk-yeol of the People Power Party in the presidential election. There has never been a reciprocal visit from a ROK president to SA, despite the Mandela family’s enduring engagement with that country. Nelson Mandela’s daughter, Zenani Mandela-Dlamini, has been the SA ambassador since 2019. This may be the right time to deepen what has already been a fruitful relationship.