Hot desks have never been this hot, with billions of people under COVID-19 lockdown, employees across the world have been forced to work from home. You may have noticed this yourself, during one of those endless Zoom meetings or while you were pitching sales ideas to your pet goldfish.

In SA, IT company Dimension Data went as far as introducing an online booking portal that allowed its employees to schedule the days they wanted to come into the office. DiData’s idea was to ensure physical distancing and hygiene protocols were maintained … but honestly, it’s all a bit weird.

‘It’s been a stark and dramatic change in work environment and responsibility,’ says Nicol Myburgh, head of the human capital management business unit at CRS Technologies, describing the strange new global WFH phenomenon. ‘People are working from kitchen counters, home studies and lounge suites. They’re waking up and heading into the virtual office in pyjamas. The world is online, and organisations that resisted remote working for years are living out their worst fears. Will the work get done? Will the employee deliver? How do I know they’re not watching Netflix?’

That, by the way, is precisely why, if you’d asked your boss if you could work from home a year ago, the response would have been a hard no. The assumption, traditionally, was that if you were away from their managerial eye, you’d spend the day in your PJs, goofing off and talking to your goldfish.

And that’s why in July 2020, at the height of the first worldwide lockdown, a Gartner survey of US company leaders found that, while 82% of respondents intended to permit remote working some of the time as employees return to the workplace, during April and May of 2020 almost 20% of US organisations invested in some form of software or technology designed to track and monitor remote employees.

Gartner also estimated that by end-2020, about 80% of companies will be using monitoring tools to track employees’ productivity. ‘It’s everything from technology that will take photos of employees from their laptops, to tools that allow workers to punch a virtual time clock, to tracking keystrokes to monitor productivity levels,’ says Brian Kropp, chief of research in Gartner’s HR practice.

Initially, remote-employee monitoring worked very well. In May, US-based productivity software start-up Prodoscore confirmed that remote working during the pandemic was making staff more productive. It recorded a 57% increase in volumes of employees’ email correspondence and a 230% increase in time spent on phone calls, along with a 22% drop in accessing calendar apps (which, they said, implied that less time was being wasted in meetings). How did it know all of this? It had collected data from their 30 000 users, tracking thousands of daily activities on those employees’ computers.

Another tracking-software company, Awareness Technologies, offers a similar service, keeping a record of every task that employees do on their computers. Each worker is assigned and ranked according to a productivity score. 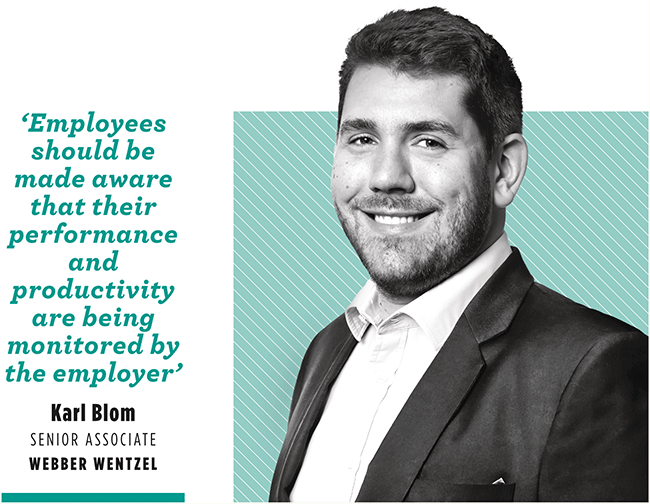 Then there’s Time Doctor, which uses the webcam on an employee’s computer to take a picture of them every 10 minutes. As one anonymous worker told NPR, ‘if you’re idle for a few minutes, if you go to the bathroom, […] a pop-up will come up and it’ll say, “You have 60 seconds to start working again or we’re going to pause your time”’.

While managers – or, more to the point, micromanagers – absolutely love tools such as these, many employees are resentful about the lack of trust and the invasion of privacy. In IT circles, tracking software has already earned the nickname ‘tattleware’.

Awareness Technologies CEO Brad Miller doesn’t see a problem. ‘If you’re not working or doing something wrong, then I guess it will tattle on you,’ he told NPR. ‘But I don’t think that’s really how companies that are buying [the software] think of it as. Are [employees] generally active on programmes and websites that I would consider productive like Excel, PowerPoint, Word, email, as opposed to YouTube or Facebook? That’s primarily what our customers are looking to know.’

Miller says that Awareness Technologies’ business has tripled since the COVID-19 outbreak. Meanwhile, David Heinemeier Hansson, co-founder of Basecamp, which enables companies to co-ordinate remote workers, told the Guardian that he regularly has to turn down requests from potential clients for new methods of spying on staff. ‘There’s a depressing amount of demand and it’s mostly coming from dinosaur companies who have been forced through COVID to go remote,’ he says. ‘They think that they have to replicate – or even increase – what they do in the office.’

In some cases, however, monitoring is necessary – and mandated. Financial services firm PwC took plenty of criticism when it rolled out a facial-recognition tool that logs when employees are away from their computer screens while they’re working from home. The technology requires employees to provide a written reason for any absences – including, incredibly, toilet breaks.

It sounds ridiculous, but – as PwC points out – the software is designed to help highly regulated financial institutions meet their compliance obligations. After all, employees are normally monitored for security purposes on trading floors. ‘We are developing technology specifically to support the compliance environment required for traders and front-office staff in financial institutions,’ according to the company. ‘Crucially it is designed to support those adhering to the regulations while remote working, in the least intrusive, pragmatic way. Trading is highly regulated and there are strict requirements for traders in the workplace – for example, secure trading floors without access to personal mobile phones. Regulators have stated that remote working results in a change in risk and requires additional controls and mitigations.’

Significantly, PwC has recommended to parties interested in using the software that ‘the voluntary consent of traders wanting to work from home is essential’. As CRS Technologies’ Myburgh puts it, ‘it’s generally a good idea for companies to stay away from secret monitoring tools that track their movements and behaviours. If it’s absolutely necessary to monitor employee behaviour, consider using transparent and visible tools such as online time sheets, which everyone can see and assess. It’s not particularly fair to watch an employee’s every move’. It may not be fair, but is it legal? Karl Blom, senior associate at ‘big five’ law firm Webber Wentzel, says that ‘although employers are generally permitted to monitor employee performance and productivity, employers should bear some personal information and privacy considerations in mind’. The two biggest considerations are the Protection of Personal Information Act and the Regulation of Interception of Communications and Provision of Communication-Related Information Act, better known as POPIA and RICA.

POPIA includes eight conditions for the lawful processing of personal information. ‘Condition 6 – “openness” – is particularly relevant in this context,’ according to Blom. ‘Employers should ensure that they play open cards with their employees. In other words, employees should be made aware that their performance and productivity are being monitored by the employer, and the employer should provide reasons for doing so to the employee. Employees should also be made aware of instances where a third-party service provider is monitoring their performance and productivity.’

There’s a fair amount of small print and legalese that SA employers have to untangle around RICA, but the bottom line – as Blom explains it – is that ‘the employer must demonstrate that the interception pertains to the electronic communications systems that have been provided for the use of the business, and that the employer has made all reasonable efforts to inform the relevant employee, in advance, that the communications on their system may be intercepted’.

In order words, yes, your employer can install tattleware on your work computer; but no, they can’t do so without telling you about it. Still, there’s plenty of grey area when it comes to employee monitoring.

Consider Zoom. Until as recently as April 2020, the video-conferencing software allowed hosts on its paid service to activate ‘attention tracking’, a feature that let them see if meeting attendees navigated away from the app for longer than 30 seconds during a meeting. So if you slipped out for a 31-second loo break or switched desktop windows to check your work email, Zoom would – without your knowledge – tell your boss that you weren’t paying attention to their boring presentation.

Was that necessary? Was it spying? It depends on who you ask: the employer or
the employees. Zoom, for its part, has since removed the feature.