As the world moves into an uncertain 2021, alliances are proving essential to survival. In the motoring arena, key partnerships are helping sustain an industry ravaged by COVID-19. Ford will work with Volkswagen in creating the next Amarok; Mazda will draw on expertise from Isuzu; Fiat, already in partnership with General Motors, will roll out a whole new generation of cars; and significantly for SA, the Renault-Nissan alliance continues apace, benefiting both. With so many in bed with each other, marketing, branding and accessorising is going to be ever more important in distinguishing models and manufacturers.

Cue the age of the special models, a marketing sleight of hand used to convince buyers that they’re getting something bespoke, limited, unusual. And nowhere is this more evident than in the double-cab market, where limited editions abound.

SA is in a double-cab holding pattern at the moment, waiting for a raft of next-generation models to launch. It’s another reason why there are so many special editions around lately, run-out specials adding interest to well-loved stalwarts.

That’s not to minimise the strength and depth of the current vogue for pimped-out double cabs. All the new models on the horizon will offer – and in some cases be launched with – flared-out, aggressively styled special editions. Big is big in the double-cab world and the fight goes on to be the sandpit champion. 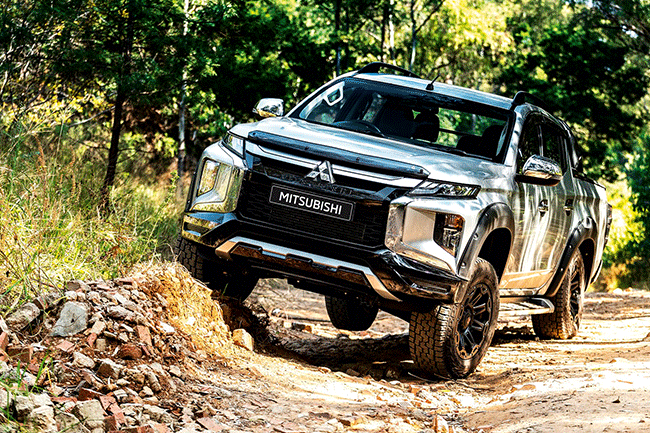 Mitsubishi Triton
The recently announced new Triton range has finally allowed Mitsubishi to play in that big boy Ford/Volkswagen/Toyota/Nissan/Isuzu sandpit but, as with all sandpits, there’s a show-off (or two) and the newbie suddenly finds itself decidedly the 92-pound weakling in looks, if not ability. To avoid the inevitable sand-in-its-face moment, Japan has come to its rescue with the Xtreme.

Even before the paint has dried on the new range, there’s a limited edition doing the rounds. The predictably hardcore name is a special import with all the look-at-me trimmings necessary for the Insta generation; the de rigueur black bumper and grille combo, black Kekosport styling bar, aggressive bonnet protector and Mad Max-inspired headlamp covers.

Of course, under all the lipstick and make-up is a thoroughly decent, entirely contemporary double cab, easily Mitsubishi’s finest to date – comfortable, responsive, elegant inside and spacious to boot. And it’s efficient too; Mitsubishi’s 2.4-litre turbodiesel engine has been refined and remapped, offering a stream of acceptable power to the 4×4 chassis.

Ford Ranger
So, to the current king of the special editions. Ford has proven very, very good at bakkie bulking and is arguably the pioneer of the current special-edition vogue, with its Wildtrak. But since those early ‘edition elevation’ days things have become seriously competitive, and Wildtrak now seems tame in comparison to the latest Creatine monsters.

Ford’s latest iteration, post-Raptor, is the astonishing Thunder, the current king of double-cab one-upmanship. Based on the locally built Wildtrak, Thunder can be ordered in a 3.2 TDCi, 4×2 configuration. Raptor, remember, is only available locally with the four-cylinder engine, even though it’s doing a roaring trade overseas in V6 and V8 guise. So it is that Ford SA heeded the howls of indignation and has effectively added an engine worthy of the post-apocalyptic looks.

But how do you out-Raptor Raptor? You add even more menacing red accents (the grille and sports bar, seats, steering wheel and instrument panel), plenty of blacked-out bits (18-inch alloy wheels, grille, rear bumper, skid plates, fog lamp surrounds, exterior door handles, and rear and front light surrounds and some lenses) and, the coup de grace, a sill plate that glows red and scares the kids.

Like Triton, happily the Ford Ranger’s current architecture and innards are sound; the 3.2-litre, five-cylinder oil-burner has been delivering solid service for some time now and is widely admired. It’s not cruise-missile quick, of course – the accent being on torque and lugging power. Buyers will, however, be disappointed when they realise that the automatic box mated to the 3.2-litre engine is the conventional six-speed, rather than the latest 10-speed, available on the 2-litre Raptor. Ah well, you can’t have everything.

Toyota Hilux
The perennial bestseller in SA was slow to the bulk-up party, almost as if such gauche affectations were beyond it. But needs must; ahead of the big news of a comprehensive revamp of the current Hilux, Toyota gave Hilux the Gazoo Racing treatment, hoping that Nasser Al-Attiyah’s 2019 Dakar win would translate into sales. The results are mixed, to be kind, and certainly not the most successful limited edition on the market. No problem – when the revamped Hilux hits shelves either at the end of 2020 or at the beginning of 2021, they’ll be laughing into their coffers.

A reimagined Hilux is a much-anticipated thing and the nation waits. It will be prettier, produce more power from its 2.8-litre turbo-diesel engine, feature a much-needed revised suspension set-up and a less important, larger touchscreen with Apple CarPlay and Android Auto functionality.

The suspension overhaul is especially important – the major gripe of the current model is a harder than acceptable unladen ride. Famously, Toyota suggested at one point on launch that it might be a good idea to load the bay for better everyday comfort. All this before the wholly new model in 2023. Tasty.

Volkswagen Amarok
It’s the standing industry joke – when will Volkswagen actually release its super-hyped, much-anticipated, 190 kW V6 Amarok? Now-now, says Volkswagen SA… By the time you read this you should be able to pop down to your friendly, COVID-19 sanitised dealer and order one, if not drive one away (the waiting list is long). A quick reminder if you’ve been Rip van Winkled these past two years – the flagship Amarok uses the company’s 3-litre V6 TDI engine, which produces 190 kW and 580 Nm, sending the power to to all four wheels via an eight-speed automatic transmission.

The overboost function – which pushes peak power to 200 kW for 10-second bursts – makes it the most powerful double cab on the market, with sprint times in the mid-seven-second range to 100 km/h and a top speed of more than 200 km/h, though hardly recommended in a leviathan double cab. Fuel thirst should stay under 10-litres per 100 km and, as expected for a smidgen under R1 million, luxury abounds – heated Nappa-leather seats, Bi-Xenon headlamps, bespoke wheels and a raft of other niceties are available, though it’s a little churlish of VW to offer many of them only as optional extras, even on the top-of-the-line Extreme. 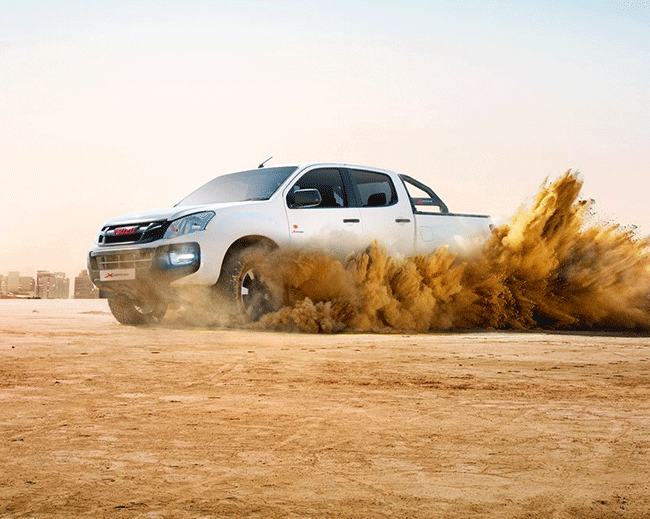 Isuzu D-Max
Another waiting game here, with Isuzu’s all-new D-Max (the old KB) heading our way in late 2021. It will be built in the country and this, apparently is partly why SA has had to wait. The retooling of the factory is taking time, given that the technology leap from old model to new is a big one this time; new D-Max is a wholly contemporary creature, compared to the demonstrably agricultural current model. Clattery maybe, but SA loves it to bits for its bulletproof character and terrier enthusiasm for all things off-road. It’s the non-poser’s bakkie and genuinely pretty to boot.

While we wait for the all-singing, all-dancing new D-Max, expect some delicious run-out editions. Like this one – Isuzu’s contribution to the bigger-than-you brigade is the recently announced, clunkily named, special-edition D-Max 3,0 TD X-Rider 4×2 AT. Just call it the X-Rider on steroids and folks will know what you’re referring to. 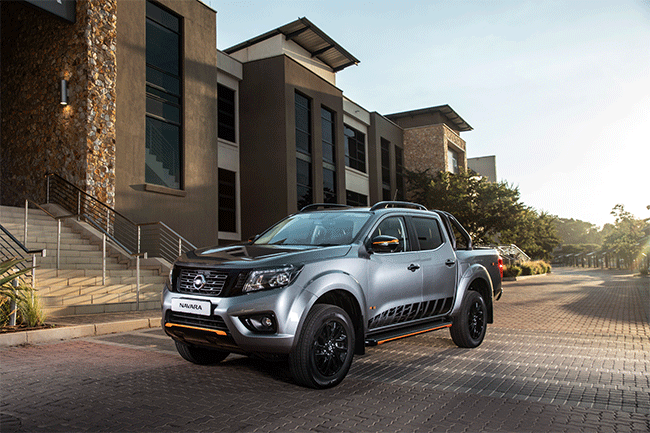 Nissan Navara
More waiting, this time from Nissan, who will build the next Navara in SA too, thanks to the shuttering of the Barcelona plant. The latest date for the relaunch is late-2020, though expect that to roll out as yet more COVID-19 repercussions become apparent. In the meantime Nissan’s own entry into the bulked-bakkie market is the Stealth, essentially an add-on kit. Stealth’s black and orange trimmings are the business, as are the blackened rear roll bars and black alloy wheels.

The mechanicals stay the same – Nissan’s 140 kW, 450 Nm 2.3-litre turbodiesel engine, mated with that sweet seven-speed automatic transmission. And of course that industry-leading suspension – one of the main reasons Mercedes came calling when they asked Nissan to co-parent on the (now-defunct) X-Class – the super comfy, five-link rear suspension is in a class of its own.