Ah, Paris… The city of light and lovers. It’s impossible not to fall head over heels for the French capital. From fine art to fine dining, colourful markets to cultural immersion, it’s a city that will prove hard to leave. And while summer time brings the tourist crowds, there are enough captivating corners to find a piece of the city for yourself.

Whether you’re a first-time visitor or returning to Paris after years away, it’s worth spending a day or two ticking off the iconic sights of the city. Yes, there’ll be crowds, but plan a visit carefully and the worst of the queues can be avoided. Go online for timed tickets for the Eiffel Tower and avoid half the hassle, especially if you book for earlier in the morning, before the tour buses arrive.

The same applies for the Musée du Louvre. Although the home of the Mona Lisa is abominably busy at all times of the day, visiting early and mid-week is the best bet for some peace and quiet. Or, for an art fix, swap Da Vinci for Degas: the charming riverside Musée d’Orsay, once a railway station, has a remarkable collection of Impressionist art. Arrive well before the 9.30 am opening and there will usually be fewer queues to contend with. Of course, everyone wants to wander along the glamorous Champs-Élysées too, stopping for coffee and macarons at Ladurée, a Paris fixture since 1862. Come evening, the colourful streets of bohemian Montmartre, where pavement cafes and bars tumble onto the streets of the 18th arrondissement (district) of Paris, come alive. Admire the views from the steps of the Basilique du Sacré-Cœur, and end the night with a drink in the rooftop bar of Le Terrass hotel, a favourite spot for locals. 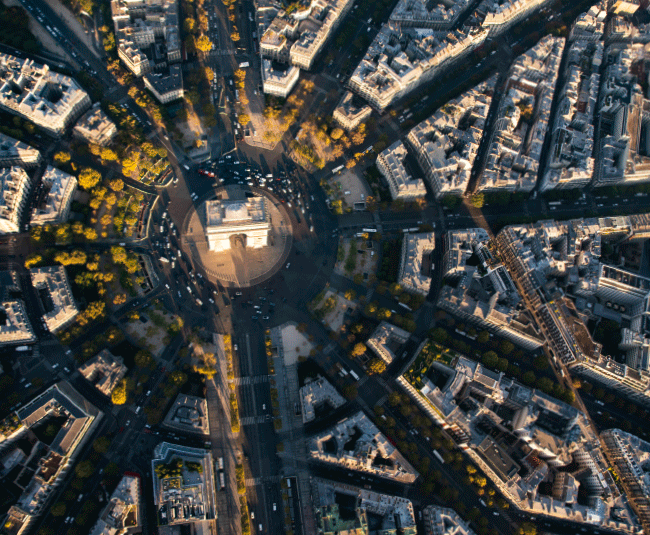 While most travellers head straight for the Eiffel Tower to take in the views, there are other, better, spots to soak up an eyeful of Paris. My favourite is the Arc de Triomphe, bookending the western end of the Champs-Élysées in the heart of the city’s famed La Place de l’Étoile. It’s a site most visitors admire from below, but few take the trouble to climb the ‘triumphal arch’ that was unveiled by King Louis Philippe in 1836. There are 284 steps to the top, but the 360-degree views are well worth the effort. Plus, there’s a lift for the less energetic. In summer the Arc de Triomphe (€12 pp) is open from 10 am to 11 pm, offering unforgettable night-time views of the city. Planning a proposal? There are worse places to bend the knee. 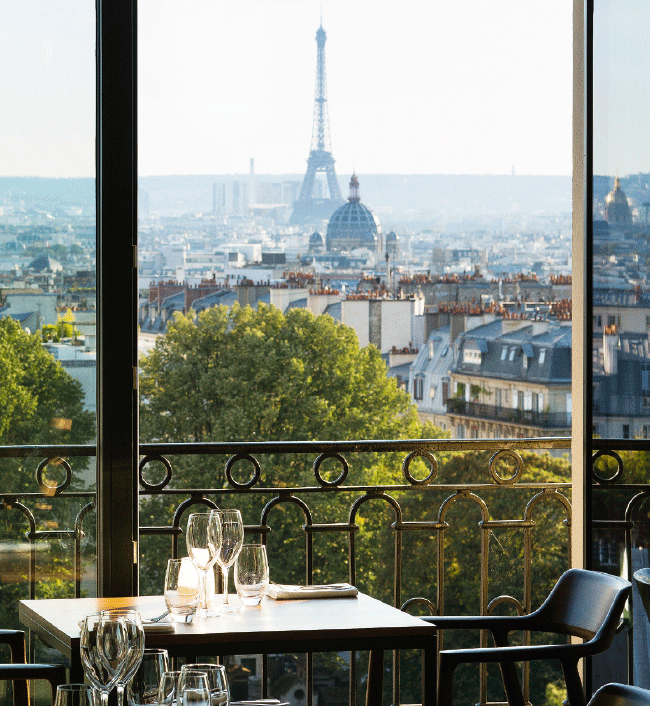 After a devastating fire ravaged the 12th-century cathedral of Notre-Dame de Paris, this favoured tourist spot – the most visited monument in Europe – has been closed to visitors. Experts expect restoration of the iconic site will take years, if not decades. The bell towers, however, can still be admired from afar, and happily Paris is filled with other Gothic marvels to admire. One of the most impressive is just a short walk from Notre Dame on the Île de la Cité, one of two natural islands in the Seine.

Sainte-Chapelle was built in just seven years during the 13th century, and is most famous for its remarkable stained-glass windows. Each of the 15 windows is 15m tall, with the interior of this royal chapel depicting more than 1 000 scenes from both testaments of the Bible.

Another well-kept secret is the 16th-century Tour Saint-Jacques, a short walk from the Notre-Dame in the neighbourhood of Châtelet. Ancient pilgrims walking the Camino de Santiago to Spain took their first steps from the foot of this tower. Today, visitors can tackle the 300-step staircase to the top for a close-up view of the ornate stone statues and gargoyles. The views from on high are also superb. 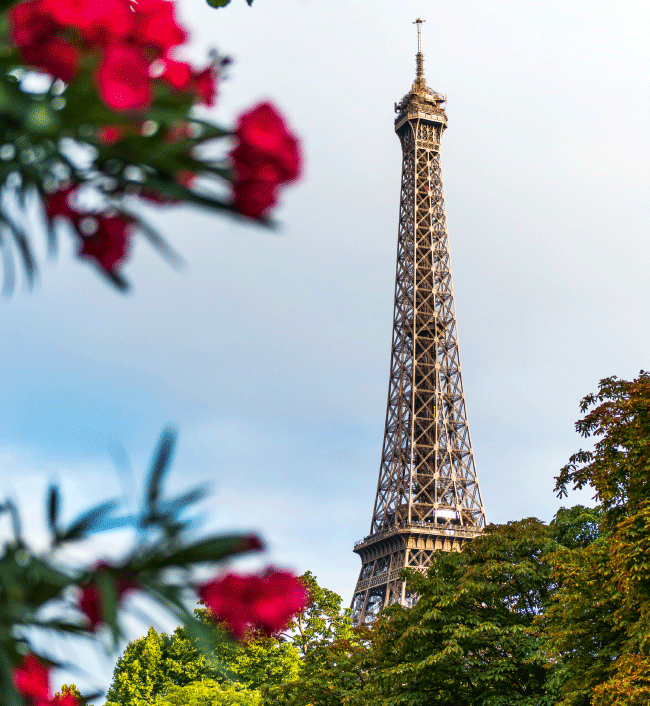 Paris is blessed with some of Europe’s most beautiful public parks, so if the busy city pavements start to grate there’s always a garden nearby. It’s a rare visitor who doesn’t rest their legs in the Parc du Champ-de-Mars, the green lawns stretching away from the foot of the Eiffel Tower. It’s a popular spot for sunset picnics. And happily, in France you’re allowed to drink wine in public parks. If there’s time, wander across the Seine to the Jardins du Trocadéro, to where the impressive Fountain of Warsaw frames the Eiffel. The Jardin des Tuileries is another of the most visited gardens in Paris, situated alongside the busy Musée du Louvre. These formal gardens were laid out in 1640, and they remain the largest public gardens in the city. In summer the Fête des Tuileries funfair sets up on the park’s northern boundary, offering gondola rides, food stalls and amusements for kids.

More traditional entertainment can be found in the large pond at the Jardin du Luxembourg. Situated just south of the trendy district of Saint-Germain, the spacious gardens date back 400 years and are filled with elm-lined avenues and statues. There are pétanque courts and bandstands, but family travellers should seek out the octagonal basin near the palace, where wooden sailing boats are available for rent (€5/30 mins).

Make no mistake; the French take Bastille Day (14 July) seriously. Properly known as ‘le quatorze juillet’ and ‘la Fête Nationale’, the national holiday commemorates the storming of the Bastille fortress on 14 July 1789. The fortress was infamous for holding political prisoners, along with plenty of arms and ammunition, and the revolt was a turning point in the French Revolution. 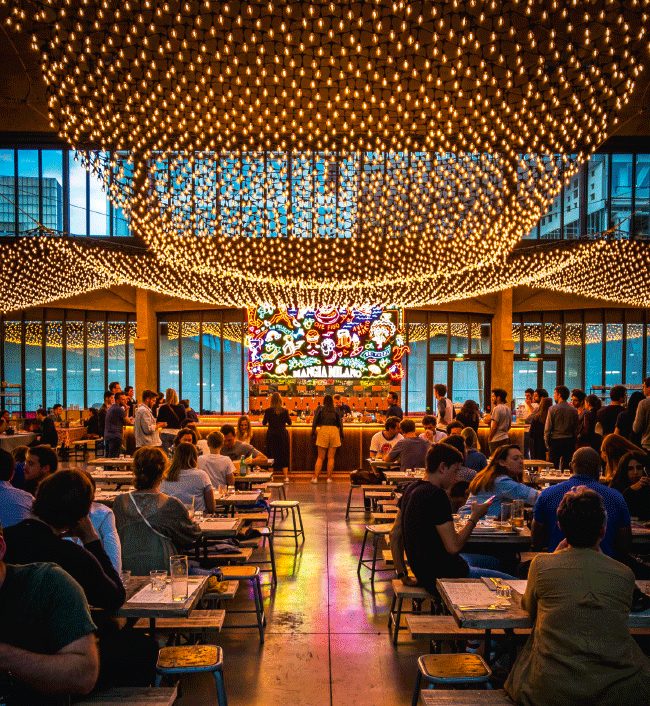 Those historic moments are celebrated in style across the city, with free entry to major museums and a full schedule of events. The morning sees an impressive military parade down the Champs-Élysées, as air-force jets blaze the Tricolore above the city. But the real excitement comes in the evening, as locals get ready for the fireworks display set off from the Eiffel Tower and Trocadéro gardens. While the first fireworks erupt at 11pm, they’re preceded by a free classical concert at the foot of the Eiffel Tower, featuring the Orchestre National de France. It will, unsurprisingly, be crowded, so get there early to bag your spot on the Champ de Mars.

While many Parisians leave the city for their summer holidays, heading for the coastal resorts of the Côte d’Azur, since 2007 the coast has come to the city in the playful Paris Plages. These pop-up beaches turn the banks of the Seine into a seaside resort, complete with parasols, deckchairs and palm trees. There’s no charge but competition for prime spots is fierce. 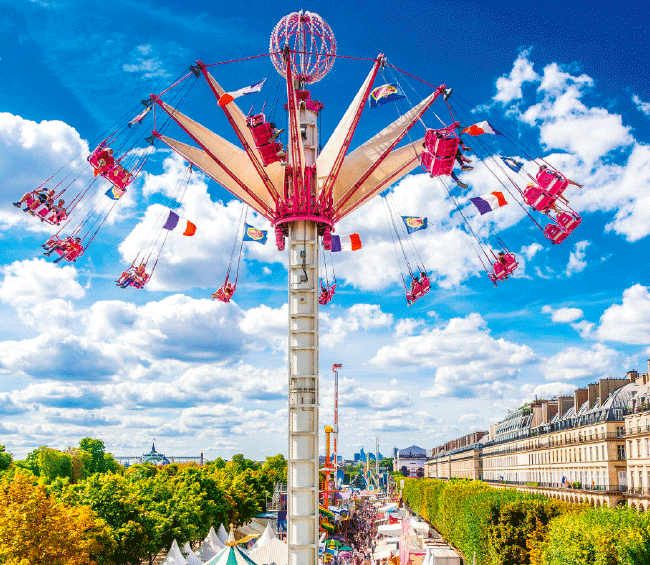 The Paris Plages pops up at two main locations: the Parc Rives de Seine in the heart of the city, and the La Villette canal basin a little further out. Hungry? With more than 100 restaurants boasting a Michelin star, there’s no shortage of fine dining opportunities in this capital of gastronomy. However, the local food markets are where to make the most memorable culinary discoveries. Some are institutions in the city, while others pop up briefly on local pavements, only to disappear a few hours later.

Start at the beginning, at Marché des Enfants Rouges (Tuesday–Sunday, 8 am–8 pm) in the trendy Marais district. It’s the oldest food market in the city, keeping locals well fed since 1628. Also worthwhile is Marché Bastille, open Thursdays and Sundays until mid-afternoon. It’s one of the largest public markets in the city, brimming with more than 100 stalls piled high with French fare.

Lastly, to wander with the locals, seek out the lesser-known Marché d’Aligre. It’s an easy walk from the Bastille, and is stocked with everything from heritage bric-a-brac to fresh cheeses and baguettes for a picnic. Bon appétit!