Domestic travel was identified last year as the primary driver for Southern Africa’s resurgent tourism industry through 2021. One of the key drawcards is the Kruger National Park, which, along with Cape Town, represents SA’s greatest tourism asset. The park is open, as are the ever-more important satellite parks surrounding the motherlode, Sabi Sands, Timbavati, Klaserie – all good for the best pampering and game viewing in the world. The list of exceptional Lowveld lodges is long; Kruger’s bounty as much the free marketing for satellite businesses as the wild beasts that roam its interior. And they are eager, some desperate, for visitors. Many have learnt the hard lesson of marginalising local markets at their peril, and have embarked on aggressive – and hopefully long-term – campaigns to win back SA travellers.

PAFURI LUXURY TENTED CAMP
Return Africa’s Pafuri Luxury Tented Camp in the far north of the park is that rarest of things – possessing a sense of archaic Africa that many lodges try for, but few succeed. It’s on the Zimbabwe border, part of the Makuleke region, overseen by the community, now partners in the conservation and tourism aspects of the concession. Apart from the  camp itself, what recommends Pafuri is the area’s standout natural superstars – the vast Lanner Gorge, the Luvuvhu river and a fever-tree forest which, once experienced, will never leave you. The camp first… Set on the banks of the Luvuvhu, 19 luxury tents under thatch, including seven four-sleeper family tents, accommodate a small community of very lucky guests. Remote and rare the camp might be, but the pampering is there – bespoke drinks selection, indoor and outdoor showers, carefully chosen menus, dinner under the stars. Yet for all that Pafuri is about the wilderness – experienced either from the back of a Cruiser or on foot on the famed walking safaris. Or both. Guides are able to drive and drop – stop in thick woodlands, walk a short way, part the undergrowth and boom, Lanner Gorge, 150m cliffs painted orange by the setting sun, the Luvuvhu river below carving stone that is more than 200 million years old. Makuleke’s southern boundary, grand beyond measure, stuns even the loudest into silence. 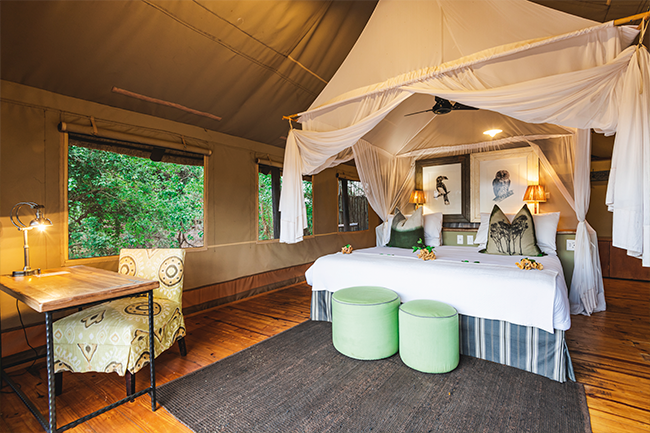 There’s more – walking through Makuleke’s enormous fever-tree forest is an exercise in weirdness. The green-golden light, entirely otherworldly, gives the scene something of a sci-fi feel. Baobabs too, further north, equally bizarre up close, and if you’re lucky they may be flowering. White blooms crown these upside-down trees, and devil thorns blossom like tiny yellow explosions at their feet. It’s a remarkable part of the world… Unforgettable.
returntoafrica.com

MAKALALI LODGE
Further south, things get decidedly more populated. After the rarity of Makuleke, the central region of Kruger can come as a bit of a shock. But there is much to recommend it. Most of the buzz has been about the Shalati Train on a Bridge at Skukuza, and justifiably so. But there’s another newcomer in town, Tourvest’s Makalali Lodge, nestled in the larger Makalali Private Game Reserve along the Makhutswi river, near Hoedspruit not far from Kruger’s Orpen Gate. It’s a newly built five-star lodge, grand in its intentions. There are 30 enormous suites set well apart from each other in two clusters and a vast, multi-layered wooden deck, complete with swimming pool, bar and various open-air lounges for quiet moments before meals. Dinner is traditionally in the boma around the fire, and Makalali prides itself on its culinary adventures, a combination of local and regional flavours fused with best-practice international food trends. Game drives head out into the 26 000 ha bushveld and seeing the big five is entirely possible, if not guaranteed. But it’s the quiet and the relaxation that really recommend Makalali – an ancient landscape at peace with itself, its inhabitants and visitors.
aha.co.za/makalali-lodge

KRUGER SHALATI TRAIN ON A BRIDGGE AND THE KRUGER STATION PRECINCT
Slightly further south, near Hazyview and in the real nucleus of Kruger’s commercial hub, is Kruger’s latest, most audacious enterprise. Kruger Shalati Train on a Bridge seeks to highlight the Lowveld’s hidden train history, the past wrapped in modern technology and ideas. So what is it exactly? Shalati is essentially a satellite of Skukuza Camp; a five-star train hotel permanently parked on the Selati bridge, stretching over the Sabie river. It’s a converted 1950s South African Railways train, repurposed as a luxury hotel. ‘We drew a lot from the early days,’ says operations manager Gavin Ferreira. ‘We wanted to sleep on the bridge like they did, move on to land for a banquet, and sit and listen to stories round the fire.’ 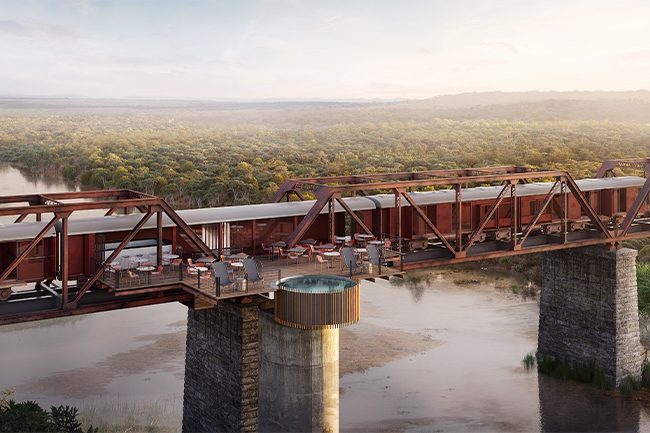 The train, permanently situated on the bridge, has 24 en-suite carriage rooms, each sleeping two. A lounge carriage and a pool deck are also on the bridge, with the pool extended over the edge of the bridge above the Sabie river. On land, an additional seven rooms accommodate 14 people, bringing the total to 62. Another pool, a restaurant and a reception area are situated on the banks of the river, where guests can eat and check in. The carriages are designed with windows on one side, giving privacy to guests and directing the view away from Skukuza Rest Camp. Each carriage room is fitted with a bathtub, shower, king-sized bed, fridge and air conditioner, a far cry from the original trains of the 1930s that parked on this bridge.

The nearby Kruger Station Precinct is a new entertainment hub, sitting close by on an elevated platform deck at treetop level. Steam locomotive No 3638 is parked there, as it has been since 1979. Within the precinct is a 360-degree cinema, which plays films and documentaries about wildlife and the history of the Kruger Park. It’s all very 2021, a far cry from a quick toastie and bottled Coke en route to your thatched bungalow circa 1973. But needs must; Kruger has to stay current and up to date if it is to attract a new, younger market. All things considered, they’ve done a decent job, sensitive to a past as rich as the wildlife just beyond the fast-food outlets.
krugershalati.com

LION SANDS, IVORY LODGE
If Pafuri offers space to breathe and Shalati fuses history and contemporary tourism, then Ivory Lodge is all about unabashed opulence. Part of the Lion Sands quartet of lodges along the Sabie river, it deals in exclusivity and next-level elegance. Lion Sands is superbly located, high above the narrow Sabie river floodplain. It lies within the Sabi Sands Game Reserve, bordering the west of Kruger, ground zero for many of the top-end lodges. 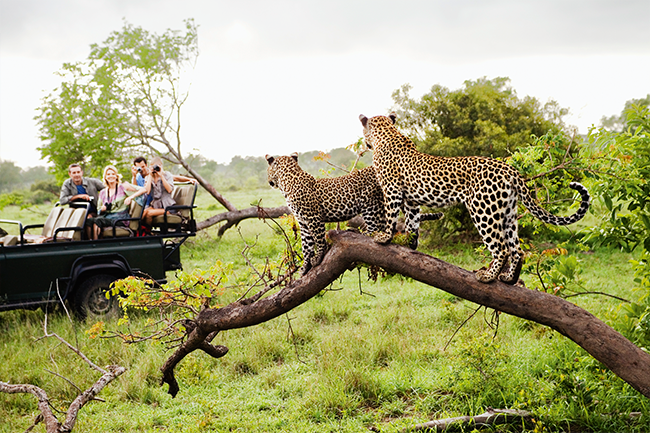 Of the four lodges, Ivory Lodge stands out as arguably the best combination of space, design and convenience. Step inside the separate villas strung along the river’s edge and the overwhelming effect is clean and contemporary – entirely surprising for a bushveld setting where many lodges are over-designed and, frankly, often dull. This then is a lodge for the contemporary traveller who has moved beyond leopard print and porcupine quills. It’s elegant and pared down – a warm, fashionable, utterly calming environment. The double king-sized beds are enormous; so too are the bathrooms and extended patios. Service is exceptional, from the curated personal bar waiting for you to the pressed laundry every morning. The long tables decked in finest white in the dry riverbed: entertainment provided by the wild chorus of evening sounds. The baseline, in the distance, are the lions; somewhere a counter-tenor hyena keens and, staccato, close by, a nightjar. Astonishing.
lionsands.com