Below, Durban’s very green, very pretty Moses Mabhida Stadium turf looks ridiculously far away and I’m wondering what brand of insanity possessed me to think this was a good idea. The breeze is stiff but not, alas, stiff enough to halt proceedings. I must jump and I must jump now, or so says the patient chap egging me on. This is the Rush Stadium Swing, the highest in the world, say that esteemed lot at Guinness, and I’m not disputing it. Three, two, one, into the hands of fate.

I won’t pretend I’ll do it again. Dangling from the roof after the inevitable teenage screaming fit, waiting to be lowered gently onto terra firma, I’m struck by what age and ‘wisdom’ do to diminish the white-knuckle experience; in times gone by, I quite literally chased crazy ideas around the world, leaping off tall buildings, riding insane rollercoasters, enjoying the rush. No more.

Instead, I’m thoroughly looking forward to the real reason I’m in Durban – to walk sedately along the city’s recently opened 8 km stretch of promenade, marvelling at the feat of engineering, nodding happily at proud locals on skateboards or guiding aged grandparents, out for a bit of a perambulation. Durban for me, like so many South Africans, occupies a special place in my heart, though truthfully it’s a fondness grounded more in nostalgia than reality. Or so say the naysayers. It was time to see for myself and the new prom was a perfect opportunity. Off the plane, and immediately I remember the sultry wraparound that means you never need to be in more than a T-shirt and shorts. The other detail I’d forgotten is how busy Durban is, a metropolis with an energy and population far exceeding that of Cape Town. A short drive down the coast, past the hive of activity that is Umhlanga – and the city beckons. The curious physical dichotomy of Durban remains – bustling seafront and affluent heights with a partial no man’s land in between.

There are signs of both deterioration and improvement everywhere. The city’s motherlode of modernist and deco architecture could do with an international benefactor, but streets and sidewalks are thankfully decent. It’s only when my journey heads past the 141-year-old Addington Hospital into the Point district that the scale of Durban’s renewal project becomes apparent.

Beyond Addington lies uShaka Marine World and now the gentrified developments of the Point precinct. It’s these projects that the Durban elders hope will ignite a greater redevelopment in the area. And the new promenade will certainly help with that. It now extends from the mouth of the harbour, doing a right turn and extending all the way down towards uShaka, past the smart new buildings and projects of the area. But this isn’t just a hastily laid coastal path – Durban’s new promenade calls to mind the recent development of Lisbon’s award-winning walkway, a multi-use avenue as wide as it is impressive.

The 2010 FIFA World Cup was Durban’s best friend, paying for a slew of developments in the Point area and elsewhere. Now, a decade later, the dream of developers and city planners is well on its way to being realised – the joining of the old harbour area and the existing promenade, which used to end at uShaka. It’s now an inviting stretch of joggers, seascapes and activities. 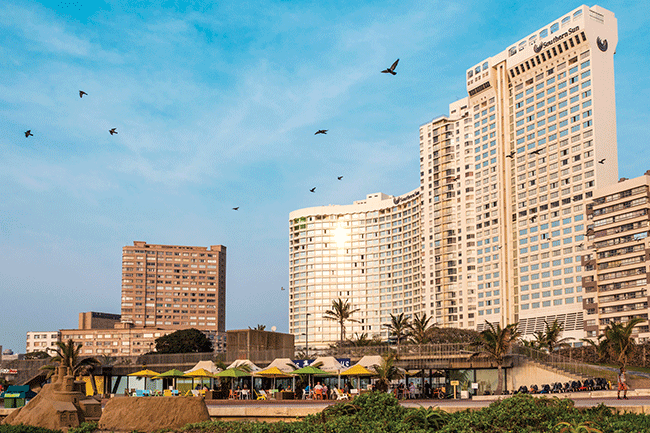 On a still, bright day it is altogether possible to believe you are walking down that fine promenade in Lisbon, or Rio or Malaga. Wide, expansive and beautifully designed, it is the perfect space for a post-COVID world, social distancing easy on the broad avenue. The coming retail and tourist development along the new part of the promenade (as well as the vitally important international cruise-ship terminal) will seal the deal; Point will undoubtedly soon be a match for the Cape Town Waterfront.

Already small businesses have set up shop adjacent to the new promenade. Zulumoon has a fleet of Venetian gondolas that glide along the canals alongside the walkway, and companies such as Xpression run standup paddleboarding excursions down the same waterways. Popular eateries and hotels such as Maha Cafe, and the Waterfront Hotel and Spa by Misty Blue are seeing increased traffic. There’s a sense of renewed excitement after the doldrum years.

All of which is not to diminish the importance of the original promenade, that place of childhood dreams, aerial gondolas, Minitown, rickshaws, North Beach and the Rachel Finlayson public swimming pools. It’s clear Durban understands how important the Golden Mile still is, with clean-up crews, maintenance work and security guards evident everywhere. It hasn’t lost that sense of holiday excitement and as I walk to the popular Circus Beach Cafe, a child, unable to contain herself, gleefully hotfoots it towards the beach, amused parents in tow. 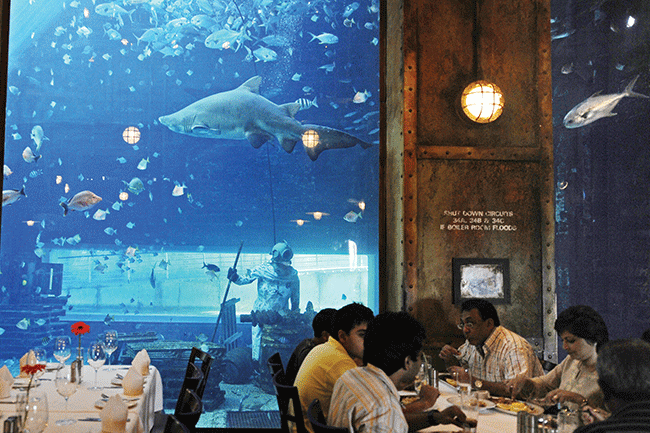 The Circus Beach Cafe is an institution, good for early risers (it opens at 6 am), ideal for espresso-fuelled people-watching. Surfers, cyclists, dancers, Iron Man wannabes, insomniacs released from their torture, the passing parade is a salmagundi of the wonderful and the weird. As the sun rises higher over the North Pier, the conventional swell the ranks; standup boarders, the first of the Instagram army, a small tour group, the Central African hawkers.

I’m struck, not for the first time, how multifaceted Durban is – a multicultural ground zero certainly, but also a celebration of difference and creativity, where there’s no normal and the hipsters don’t rule the cultural roost, despite the abundance of tattooed baristas seemingly around every corner. 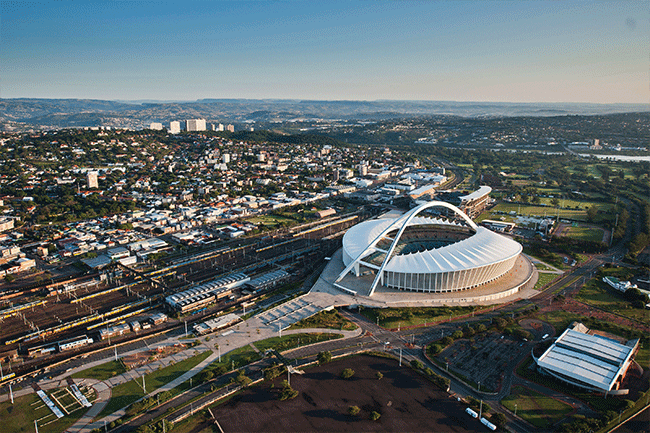 Before I leave town, there’s just time to head to that other area of redevelopment, the Station Drive precinct, across from Moses Mabhida. It’s late and the best of the vibe has evaporated, but Saturday mornings or on First Thursdays, the precinct fizzes with energy. Dip into quirky stores, stroll through art installations, go vintage-clothes shopping, try a food and gin pairing at Distillery 031, Durban’s first craft distillery. Leaving the Vintager, I overhear a couple discussing heading downtown.

‘Let’s catch the sunset on the prom.’
‘Which end?’
‘Eish, I don’t know. Never been a problem before. Actually let’s go north, catch a take-away from the cafe and head to the pier. Best of both.’

I’m smiling as I get into the Uber. It can only be the North Beach Cafe – they of the epic bunny chow. It’s nice to know that even as Durban greets a new era, some things happily stay the same. Great city. I’ll be back.