You’re far more likely to marry a CEO than become one yourself – if you happen to be a woman. Even without calculating the exact odds of this admittedly old-school comparison, it’s clear that the number of female CEOs is still woefully low. At present in SA, the JSE Top 20 features just two women chief executives: Phuti Mahanyele-Dabengwa of Naspers South Africa and Natascha Viljoen of Anglo-American Platinum.

The situation on the London Stock Exchange is similar, with only 17 female CEOs across all FTSE Top 350 companies. However, while men still firmly dominate the global C-suites, the number of women on UK boards has increased by 50% over the past five years. According to the Hampton-Alexander Review, almost two-thirds of FTSE 350 companies (63%) have reached the voluntary target of 33% of board positions held by women.

Worldwide, many female professionals still reach a plateau in middle management. Those who do rise above it often hit the glass ceiling at non-executive director level and never make it into the top team – despite the fact that the UK review speaks of a ‘full to overflowing’ supply of capable and experienced women. The Women on SA Boards report by the University of Stellenbosch Business School (USB) confirms that locally there is also a pool of highly qualified women available. Yet the gains for female leaders on the JSE have been variable and erratic. ‘In 2012, 61 [JSE-listed] companies had 25%+ female board members. In 2017, 94 companies had 25%+ female board members. From 2012 to 2017, only 26 companies have consistently had a 25%+ female board.’ 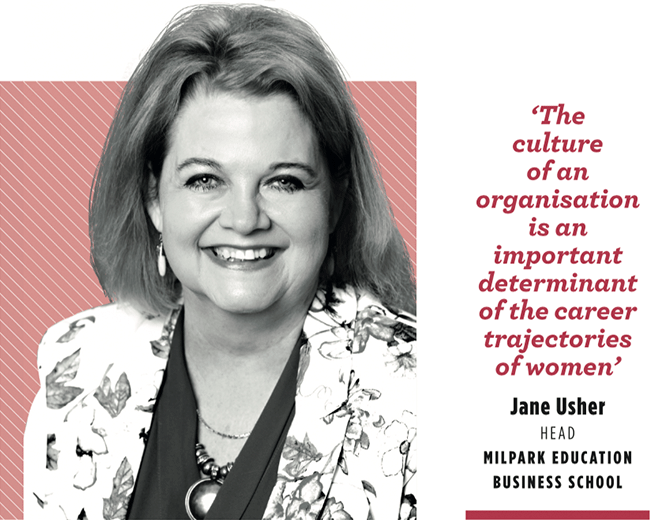 Report lead author Anita Bosch, USB research chair of Women at Work – who is currently analysing supplementary data – describes the pre-COVID situation as such: ‘The number of women in top management in SA remains problematic at only 23.5%, which signals that women are not included in the top decision-making roles of companies; according to the Women in Leadership Census, there are 33% women in senior management in the private sector and 39% in government.’

On the upside, SA is doing better than its peers. In March 2021, the JSE was named by the Sustainable Stock Exchange Initiative as the bourse with the best gender balance on boards of any developing G20 country. JSE Group CEO Leila Fourie welcomed the honour but said that ‘it’s important to acknowledge, however, that while this is a step in the right direction, significant work  remains to be done in the global quest for gender equality. Leadership teams set an important benchmark for any organisation and thus have an opportunity and a responsibility to drive transformation’.

Her own leadership team (at the JSE as a corporate) has achieved 60% female representation on its board of directors and 66.7% on the executive committee. Fourie was recently recognised in the inaugural World Federation of Exchange’s Women Leaders list for her outstanding leadership during the COVID-19 pandemic. ‘We make better decisions when more voices are heard,’ she says, which is a key argument for diversity and inclusion at board level – not only for gender, but also race, culture, age and disability.

Michele Ruiters, lecturer at GIBS Business School, explains that in today’s diverse world, companies need to genuinely represent this world. ‘Organisations have to transform to create spaces for minority groups that don’t make it into the top leadership; they have to ensure that policies and procedures reflect their vision of an equitable society, and they have to ensure that minority representation is seen and heard,’ she says. ‘Companies can no longer pay lip service to gender equality; they need to pay attention to gender equity.’ Here the difference is that gender equality promotes ‘sameness’, while gender equity encourages all genders to participate fully in work and personal life from a point of difference.

Ruiters adds that ‘gender is not a binary concept in the 21st century. We have not really begun to explore how organisations could meaningfully include genders that are currently invisible and voiceless’. However, many companies still only ask about the financial business case for having women at leadership level. ‘Research shows that company profits and share performance can be close to 50% higher when women are well represented at the top,’ says Kumeshnee West, director of executive education at the UCT Graduate School of Business (GSB). ‘Companies with more women on their boards tend to have better returns, a greater focus on employee well-being, and exhibit higher levels of collaboration. ‘Plenty of evidence suggests that having more women in senior roles increases the creativity of an organisation, increases investor confidence, builds employee trust and makes businesses more attuned to customer needs. These are all critical factors for success in the knowledge economy too.’

Owen Skae, director at Rhodes Business School, also stresses the correlation between board diversity and better decision-making. ‘The evidence is overwhelming that the gender balance ensures that the right mix of knowledge and skills is brought to bear,’ he says.

‘At risk of simplifying the issue, there is one dynamic at play, which organisations will have to consider. It is society that gives the company the licence to operate. There  is no doubt that those organisations that have balance will be trusted more. Those that don’t will be trusted less. The former companies will grow and thrive. The latter, will discover to their peril, that their stakeholders will defect.’

Another dynamic that companies need to keep in mind is that women – who make up 51% of SA’s population – form a powerful stakeholder group in the economy and wield enormous influence over purchasing decisions. At work, women are now increasingly encouraged to play to their own strengths instead of replicating male leadership styles.

‘I believe we are still trying too hard to make women be like men in the workplace and link success to that,’ says Adri Drotskie, director at the University of Johannesburg’s School of Management. ‘Women are unique in their styles of management and leadership due to their characteristics, instincts and features, for example balancing the heart and the head when taking decisions. Women need to be given the equal opportunity to apply for any position and be appointed on merit. ‘We look at gender as a category and decide where we need women and were we need men. Yet gender equity needs to be looked at in a new manner and all the perceptions and legacies such as “certain positions are more suitable for men” should be discarded. The notion globally of a “gender neutral” approach can teach us a lot in how we deal with male versus female in the workplace.’

To achieve this, SA needs to overcome ingrained prejudice against women on boards, says USB’s Bosch. ‘The Old Boys’ Club doesn’t consciously conspire to keep women out of leadership but is rather a place of unconscious bias. The increased presence of women on boards is a direct result of governance mechanisms and legislation and did not happen organically,’ she says. While the JSE listings requirements as well as King IV already require boards to set gender targets and report on progress, Bosch calls for greater transparency in monitoring and reporting these targets as well as actual consequences for companies that are not meeting them. 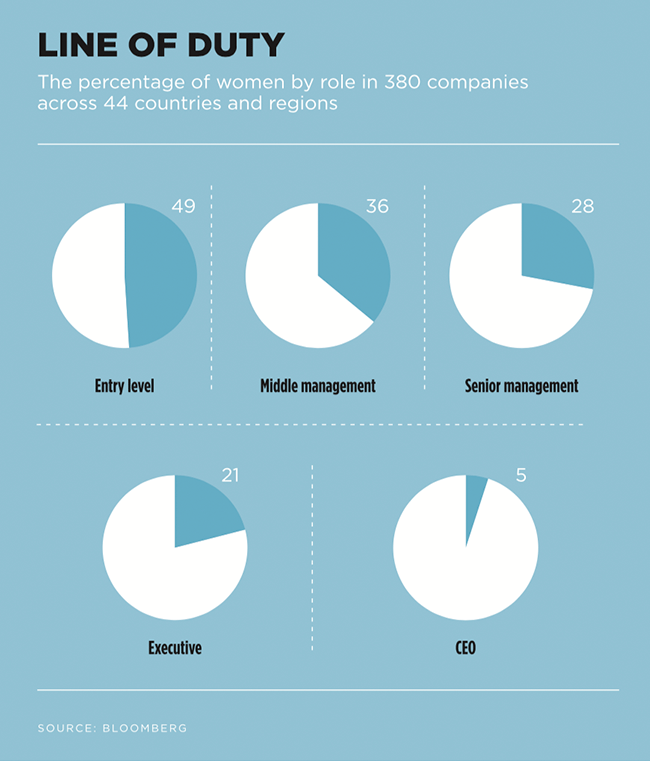 Certain industries have their own mechanisms. The male-dominated mining sector is a good example, with the Mining Charter setting industry-specific targets for women ownership and management. ‘A key objective in the mining industry is to have sufficient representation of women at all  levels,’ according to Impala Platinum [Implats], which is one of just eight SA companies on Bloomberg’s 2020 Gender Equality Index. ‘We have taken decisive steps over the past two years to improve our approach to creating an environment conducive to gender equality and to address barriers to the employment, retention and the advancement of women via our gender mainstreaming initiatives,’ states the company. Women now represent 12% of Implats’ workforce, while at board level, female representation improved from 38% in 2019 to 46% in 2020.

Clearly, gender diversity is more than a numbers game. ‘By “adding women” and not changing corporate culture to include all voices and all genders, businesses will not transform,’ says Ruiters. ‘Impact only emerges when the organisational culture is accepting of differences, or diversity as it is commonly referred to, and harnesses those differences to be innovative, inclusive and representative.’

Jane Usher, head of Milpark Education’s Business School, explains how companies can achieve this. ‘The culture of an organisation is an important determinant of the career trajectories of women. South African organisations need to check on their culture, via culture surveys and perspectives, so that they have a proper awareness of the type of culture they are perpetuating in the organisation. Reviews of policies, talent management and succession planning need to be constantly reviewed to ensure that there is scope and room for women to move through the ranks to senior and top management,’ she says. 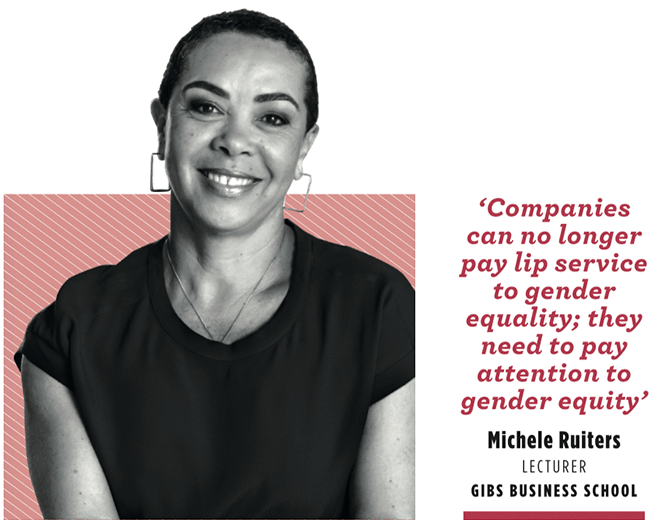 ‘When high-potential women are identified, they need to be given the opportunities and space to learn, develop and add value to the organisation. Organisations need to demonstrate trust in their female leadership, to work together, to empower more women to move into senior and top leadership positions.’ While companies can take practical steps – such as offering equal parental leave for men and women or flexible working hours as the norm – business schools also have an important role to play. In addition to producing research on women in the workplace, their tailored programmes for women in leadership create a conducive environment for experience and knowledge sharing. Female delegates benefit from personal coaching and mentoring, and can draw on a supportive network that often continues long after the course is completed.

‘By completing a gender-specific leadership course, there is an increase in the depth of understanding of diversity, cultural and societal issues that need to be managed within one’s life,’ says Usher. ‘Delegates can then develop their own action plans to manage the challenges that they have identified in their own lives and so move towards self-mastery and an increased competence in leadership and management.’

The COVID-19 crisis has forced many women to downscale their career ambitions or leave the workforce altogether. As a result, it’s imperative that companies strengthen their female leadership pipeline and give suitably qualified women – especially black SA women – a seat at the boardroom table. ‘The pandemic has shown that more women need to be promoted to positions of power,’ says the GSB’s West. ‘Women are the ones on the front line of global economic setbacks – the first to lose their jobs, the first to be assigned care-giving duties – they should help shape the response to the next crisis.’

By Silke Colquhoun
Image by Muti