The clean-eating, clean-living boom seems to have reached the local investor community, but instead of eating greens with their braai meat and cutting out carbs, alcohol and cigarettes, they are eager to make an impact through ‘clean’ investing.

Worldwide, institutional investors seem insatiable for green bonds, which only emerged about a decade ago. They are fixed-income securities that set themselves apart from conventional bonds by committing to raise capital exclusively for projects that address climate change, and promise high environmental benefits.

This year, green bond issuance will increase worldwide by 20% to reach $200 billion, up from $167 billion in 2018, according to credit-rating agency Moody’s. The 2019 estimate by the global non-profit Climate Bond Initiative (CBI) is even higher at $250 billion.

‘Investor demand for green and sustainable investment products continues to grow and far outpace the supply of such bonds,’ says Moody’s. ‘Continued issuer diversification and greater clarity around standards and definitions will help expand the green bond market.’

‘Responsible investments have become a business priority for many organisations across the globe, and we believe there is significant potential for growth in South Africa and on the continent,’ says Donna Nemer, Director of Capital Markets at the JSE. ‘Issuing a green bond can help companies strengthen their credentials as sustainable and responsible organisations. At the same time, green bonds allow investors to mitigate the effects of climate risk as a part of their investment portfolio, while these bonds also satisfy environmental, social and governance [ESG] requirements and green investment mandates.’ She adds that ‘it’s about positioning our market for a more resilient, green economy and providing investors with socially conscious debt products’. 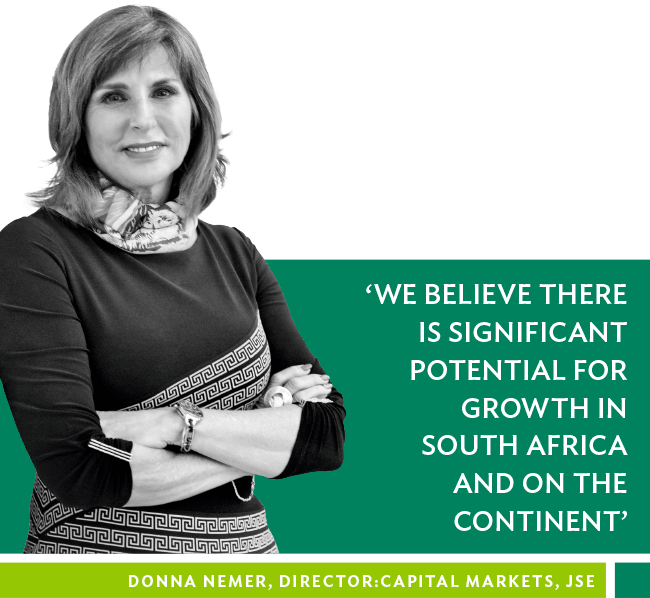 The purpose of green bonds was driven home during Cape Town’s crippling drought and the much-publicised threat of city taps running dry (Day Zero) in mid-2017. Most residents became aware of the urgency to finance climate – especially water – resilience. People living or running their businesses in the Mother City had started to feel the impact of water restrictions in their daily lives – and in their wallets – by the time the city issued its green bond, with Rand Merchant Bank as lead arranger.

The proceeds were earmarked to finance projects that include water pressure management, reservoir upgrades, sewage effluent treatment, and the rehabilitation and protection of coastal structures, as well as energy efficiency in buildings. The bond was almost five times oversubscribed and the book-building took just two hours as 31 bidders raised about R4.9 billion in total bids.

Previously, the City of Johannesburg’s self-labelled green bond – pioneered in 2013/14 as a municipal bond on the JSE to finance green projects such as solar geysers and biogas-to-energy – also outstripped demand. The auction of the R1.46 billion bond, due to mature in 2024, was 150% oversubscribed. ‘This marks a historic occasion, as Joburg is the first city in the C40 Cities Climate Leadership Group to issue the green bond,’ according to the city’s then-mayor Mpho Parks Tau.

The investor response to the green bond auctions of Growthpoint and Nedbank followed the same enthusiastic pattern – in March 2018 and April 2019 respectively – as both were three times oversubscribed and the final pricing exceeded expectations.

Growthpoint intends to use its R1.1 billion green bond to refinance funding for the top-rated green office buildings in its portfolios as well as suitable industrial and retail properties with four-star Green Star ratings or higher from the Green Building Council of South Africa. Funding will also be directed to projects that improve Growthpoint’s buildings from an environmental perspective, such as solar energy installations. 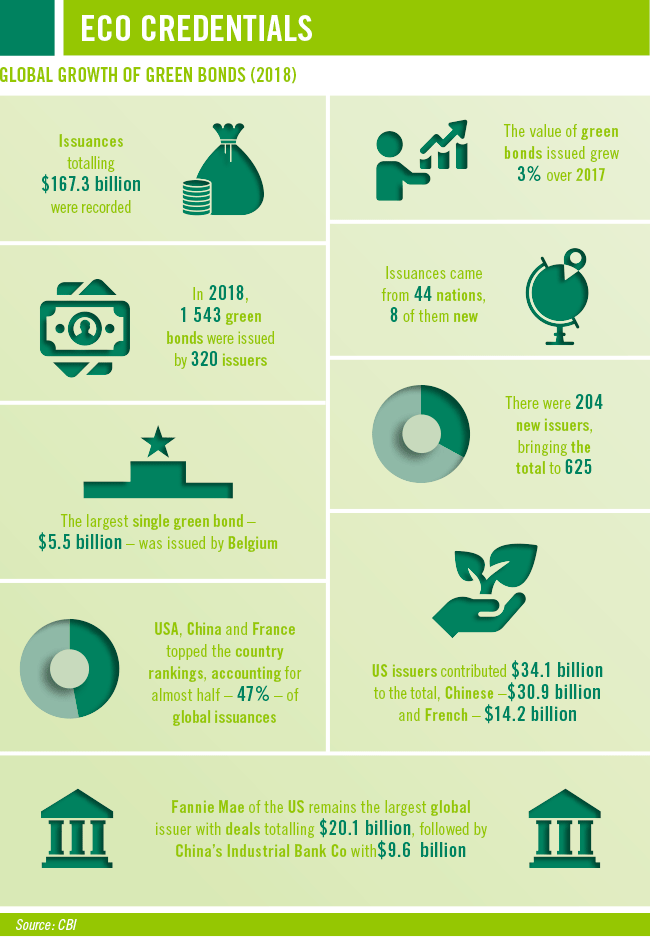 ‘Bonds with a focus on renewables present local and international investors with a unique opportunity to contribute to, and benefit from, risk-managed investment into the country’s vital energy infrastructure,’ Stewart and his colleague Arvana Singh argue in an opinion piece in Business Day. ‘The concept of impact investing, while still relatively new in the global investment space, is already evolving from a “return-first” approach to an “impact-first” requirement,’ they write. ‘As this balance continues to shift, the support by financial and investment instruments of the UN Sustainable Development Goals, with their clear alignment with ESG principles, will become the ticket required by organisations, particularly financial institutions, to participate in society and the global economy.’

The signatories of the Green Bond Pledge, an international initiative conceived by climate finance and environmental groups, have taken this thinking even further by demanding that if big infrastructure projects aren’t green, they shouldn’t be given the go-ahead.

The declaration reinforces the goals of the Paris Climate Change Agreement, with companies, agencies and governments pledging their commitment to incorporating low-carbon, resilient and sustainable solutions when planning, designing and building or rehabilitating infrastructure assets. ‘We agree that all infrastructure and capital projects will need to be climate resilient and, where relevant, support the reduction of greenhouse gas emissions,’ the pledge states. ‘As a signatory to this pledge, we support the rapid growth of a green bonds market, consistent with global best practices that can meet the financing needs we face, and will issue, whenever applicable, bonds for infrastructure as green bonds.’

In April, the first African signatory – financial services company Fedgroup – announced its support of the Green Bond Pledge. ‘We launched our Impact Farming platform six months ago, and the uptake of green assets by retail and institutional clients has exceeded our expectations,’ says Suraj Lallchand, Fedgroup’s director of ventures.

‘It’s a natural progression for the company to now set its sights on green bond issuance, as it aims to consolidate its market offering and become a significant player in South Africa’s green finance market,’ he says. ‘Our pledge reiterates our commitment to advancing green infrastructural development in South Africa and the region.’

Other signatories include the Hong Kong government, the US State Treasurers of California, New Mexico and Rhode Island, the City of San Francisco, an Australian pension fund and the Luxembourg Green Exchange.

Issuers of green bonds as well as investors benefit from a high level of transparency and a clear framework for sustainable financing. ‘It’s a win-win situation for both the bond issuer and the investor, as they show their commitment as responsible corporate citizens who consistently contribute toward a sustainable future,’ says Ruan Bestbier, sustainability analyst at Bank Windhoek, who developed the bank’s Green Bond Framework against which the management, eligibility and success of the bond issuance is benchmarked. 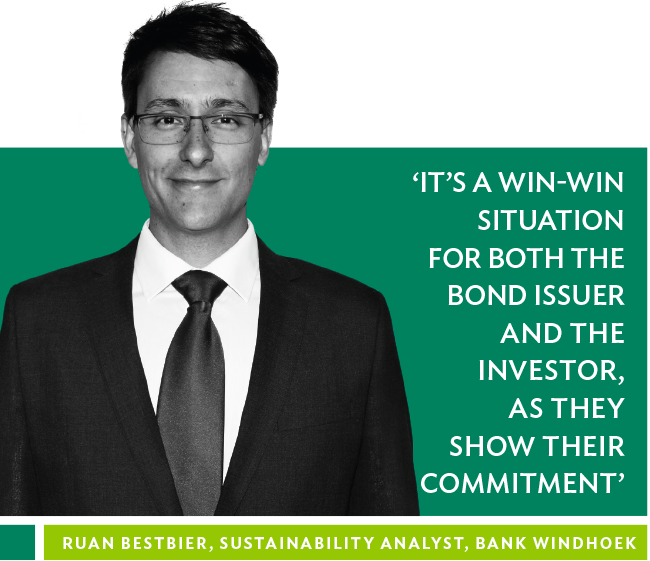 In March, Bank Windhoek’s efforts were rewarded with a 2019 Green Bond Pioneer Award (in the category ‘New countries taking green bonds global’) by the CBI. ‘We are seeing emerging economies stepping up their efforts and taking active regional roles, demonstrating much-needed leadership,’ said Sean Kidney, CBI chief executive, at the awards. ‘To reach the vital goal of the first trillion US dollars in annual global green finance, there needs to be an increased focus on capital flows to emerging economies into the 2020s.’ He said the award recipients were at the forefront of this climate finance challenge, calling them ‘pioneers who demonstrate to the world that green finance is the tool to get us there’.

Companies, financial institutions and governments in emerging markets are beginning to appreciate the value proposition of green bonds as an innovative way of unlocking capital. ‘In South Africa we face significant infrastructure financing needs, with R870 billion being required over the next three years for infrastructure investment in energy, clean water transportation, waste management and climate adaptation,’ according to the JSE.

For institutional investors – which, like in the rest of the bond market consist of pension funds, insurance companies, banks and asset managers – a green infrastructure investment can provide attractive long-term, risk-adjusted returns.

It’s a constantly evolving market, in which the range of environmentally and socially conscious instruments keeps growing. But there are not only green bonds; Seychelles recently issued the world’s first sovereign blue bond, which is specially aimed at financing sustainable marine and ocean-based projects.

According to the vice president of the Indian Ocean country, Vincent Meriton, ‘as custodians of globally significant biodiversity, we have been at the forefront of developing novel financial solutions to support our plans for strengthening climate resilience and adaptation. The proceeds from the blue bond will greatly enhance our efforts by enabling a transition to sustainable fisheries that both contribute to, and benefit from, climate-resilient systems’.

As the appetite for impact investments is still growing worldwide as well as in sub-Saharan Africa, the sky is the limit for innovative, sustainable finance instruments such as green – and even blue – bonds in the race against climate change.