Several recent judgements before the Labour Court (LC) and Labour Appeal Court (LAC) served to break new ground regarding the legal principles governing strike action in SA. The judgements leave much to be digested by employers and unions about their new responsibilities and how they need to approach strikes, secondary strikes and a host of other actions that parties typically embark on as part of their ongoing negotiation process for the best deal.

Michael Maeso, partner at Shepstone & Wylie, says there can be no doubt that some of the amendments of the Labour Relations Amendment Act (LRAA) 2018 place a greater responsibility on trade unions to ensure that strikes are supported by the majority of its members, and that the strike is not violent for fear of having details made public and losing public support.

On the flip side, however, Fiona Leppan, director: employment at Cliffe Decker Hofmeyr, points out there have been recent judgements clarifying the responsibilities of employers should they seek to avoid being on the wrong side of the law during strike action. ‘This unfolded recently in a case in which the LAC found, among other findings against KPMM Roads and Earthworks, that the requirements necessary to justify an employer’s application of the common purpose doctrine were not satisfied on the facts before the LC.’

She says the judgement came in the wake of the workforce embarking on a protected strike with a number of employees allegedly intimidating non-strikers and engaging in other unlawful acts. Trade union Amcu denied the allegations but undertook to take reasonable steps to ensure that its members conducted themselves peacefully during the course of the strike.

‘The LC applied the principles of common purpose to determine the guilt of the individual members and held that it was not necessary for the employer to establish a link between each individual’s behaviour and their unlawful conduct to find they were acting in common purpose.’ However, says Leppan, on appeal, the employer conceded that there was no basis by which to hold the individual members guilty on the basis of the doctrine of common purpose, as the evidence did not justify the application of that doctrine.

The LAC concluded that the LC’s earlier finding was in breach of the purpose of the doctrine as confirmed by the employer’s concessions on appeal. Among other evidential difficulties, the employer failed to prove that the individual members were aware of the alleged unlawful incidents, or that they had manifested common cause with those allegedly breaching an earlier court order. 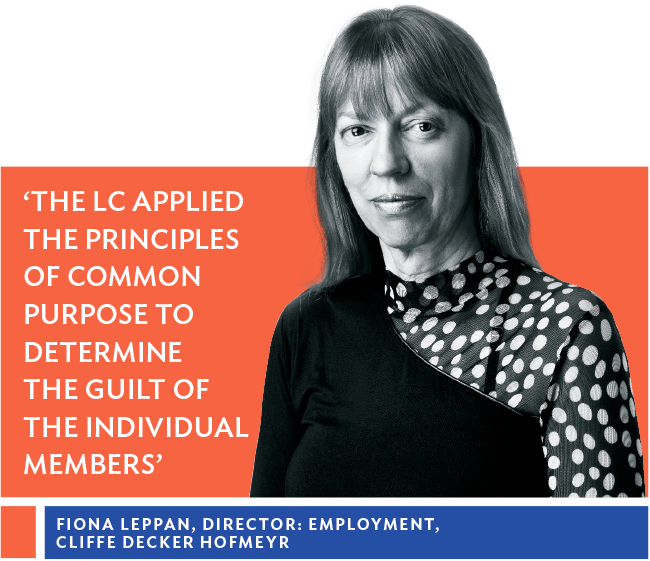 Furthermore, explains Leppan, regarding the alleged contempt of an earlier court order by Amcu, the LAC found the wording of the court order to have been vague and ambiguous. The LAC found that the employer’s interpretation of the court order to prove mala fides (bad faith) on the part of the Amcu could not be upheld. ‘If an employer wishes to obtain such relief against a trade union, it must give clear content to the obligations it wishes to impose on it. This did not happen and the LC was found to have erred in finding that Amcu had been in contempt.’

Maeso nonetheless points out that the LRAA places greater obligations on trade unions in respect of picketing rules, among other areas of strike procedures. ‘Although the Constitution of South Africa recognises the right to assemble, demonstrate and to picket, this right can only be exercised peacefully. Furthermore, a picket may only be in response to a protected strike, and no picket can take place unless picketing rules have been agreed on.’

Maeso says the LAC recently considered circumstances where strikers carried sticks, PVC pipes and sjamboks – and other employees carried golf clubs and axes – while picketing. After employees were dismissed for carrying the items described above, the union referred the dispute to the CCMA where the arbitrator had regard to the employees’ state of mind when they carried these items, and rejected that they were just exercising their traditional and customary right to carry sticks.

‘However, because the employees did not brandish or wield the weapons and only carried them, dismissal was too harsh, and they were reinstated subject to a final written warning valid for 12 months,’ he says. ‘On review, the LC found there to be no reason to intervene with the award since it was not unreasonable. But on appeal, the LAC accepted that there was no dispute that the rule not to carry or wield weapons was valid and reasonable, and that there was undisputed evidence of violent attacks against other employees during the strike.’

It went on to confirm that the right to strike does not encompass a right to carry dangerous weapons on a picket line that exposes others to the real risk of injury and serves to threaten and intimidate. As a result, the LAC set aside the arbitration award and confirmed that the dismissals of the employees were substantively fair. Importantly, the court confirmed that the arbitrator had not given enough recognition to the danger posed by armed crowds. The decision indicates a solid stand by the court to stamp out the levels of violence and intimidation often associated with strikes in SA, says Maeso.

Meanwhile, Johan Olivier, partner at Webber Wentzel, explains the key legal principles that govern secondary strike action since the LC made findings in a groundbreaking case involving no fewer than 10 mining houses in the gold, platinum, chrome and vanadium sectors. These events came in the wake of Amcu declaring a primary wage strike at Sibanye-Stillwater’s gold mines, then followed a few months later with notices of intention to commence secondary strikes at a string of other mines.

‘Secondary strikes are regulated by Section 66 of the Labour Relations Act No. 66 of 1995 as amended,’ says Olivier. ‘In order to qualify as a secondary strike, the strike must be directed at an employer other than the employer who employs the primary strikers.’ Section 66(2)(c) – loosely termed the reasonableness requirement – states that a secondary strike will only be considered as reasonable if it can be shown that the nature and extent of such a strike will have a direct or indirect effect on the business of the primary employer. 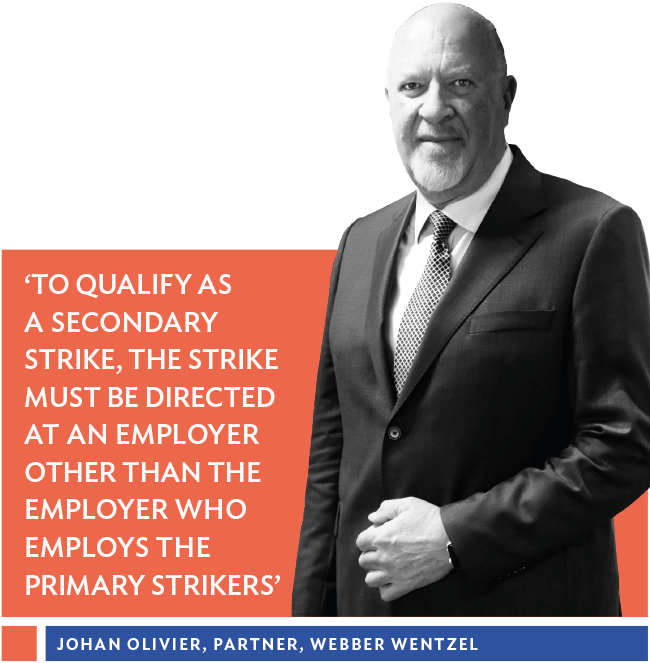 ‘This entails the weighing up of two factors, namely an enquiry into the duration and form of the strike, number of employees involved, their conduct and the magnitude of the strike’s impact on the secondary employer and the sector in which it occurs, and secondly, the extent of the pressure placed on the primary employer by the secondary strike,’ says Olivier.

In handing down its historic judgement earlier this year, the LC found that Amcu did not satisfy the reasonableness requirement. ‘The judge accepted that a secondary strike may be called to offer emotional support and apply socio-economic pressure on the primary employer.’

The court held that the enquiry into reasonableness of a secondary strike does not permit the grouping together of a collection of secondary employers within an industry. ‘Each secondary employer would be deprived of the protection afforded by Section 66(2)(c) if this was permitted,’ says Olivier. Amcu lodged a petition to the LAC to appeal against the decision after the LC judge refused leave to appeal, he adds. The LAC’s decision on whether it will grant leave to appeal is still pending.