Consequently, according to Anton Swanepoel, chairman of the legal and technical committee of the Institute of Retirement Funds (IRF), the industry is eagerly awaiting directives regarding accredited training courses for trustees (which they would have to complete within six months from the date of appointment to board a pension fund board) from the Registrar of Pension Funds (RPF).

He explains that the Pension Fund Act requires that trustees take all reasonable steps to ensure the interests of members are protected – more so in the event of an amalgamation or transfer of any business, splitting of a fund, termination or reduction of contributions to a fund by an employer and increases of contributions of members and withdrawal by employers.

‘Furthermore, trustees need to act with due care, diligence and good faith, avoid conflicts of interest, act with impartiality in respect of all members and beneficiaries, and act independently. Trustees, the law says, have a fiduciary duty to members and beneficiaries in respect of accrued benefits or any amount accrued to provide a benefit, as well as a fiduciary duty to the fund, to ensure that the fund is financially sound and responsibly managed, and governed in accordance with the rules and the act,’ says Swanepoel.

The board also has to take all reasonable steps to ensure that contributions are paid timeously to the fund in accordance with the act (in addition to obtaining expert advice on matters where board members may lack sufficient expertise), and to ensure that the rules, operation and administration of the fund comply with the act as well as the Financial Institutions Act 28 of 2001.

These stringent legal stipulations placed on trustees prompted the IRF to call on the RPF to speed up the process of prescribing skills development and training courses that trustees need to complete to ensure that they are not only appropriately appointed, but also fully trained to take care of the retirement assets of members of the fund. 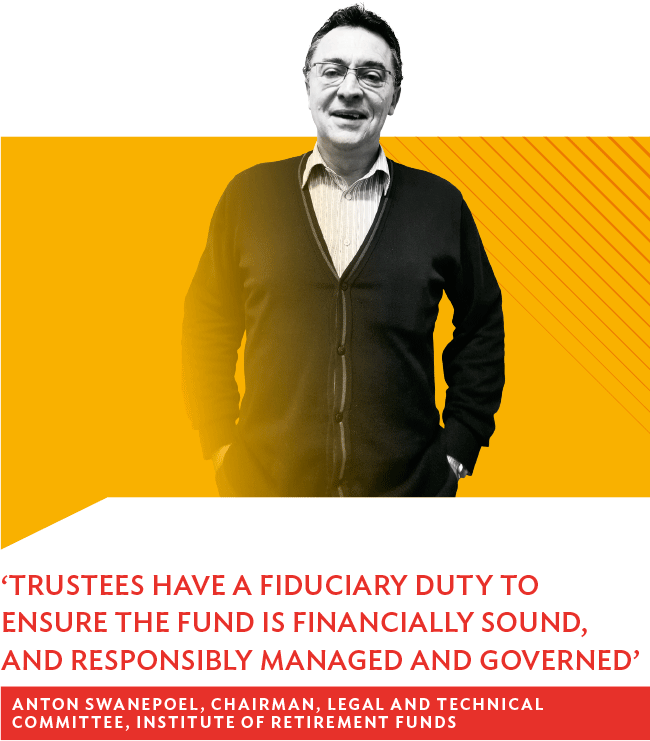 According to Swanepoel, a 2015 draft circular by the RPF revealed that the registrar was reluctant at that stage to prescribe minimum skills and training for trustees, as an ‘objective measure’ against which to measure the knowledge and skills of a trustee was first needed. ‘In this regard, the South African Qualifications Authority was involved in looking at training courses for pension fund trustees,’ he says. ‘In the interim trustees could use a free online course at www.TrusteeToolkit.co.za, developed by the Financial Services Board [FSB]. This course was also awaiting accreditation by the South African Qualifications Authority and included tutorials, practical guidelines, case studies and assessments and access to online support.’

Michael Dokakis, member of the SAICA work group and operational head at Alexander Forbes’ financial services, says that while the Pension Funds Act 24 of 1956 governs the duties of the trustees, a retirement fund is not static and must constantly adapt in order to meet the social and economic needs of its members. The fund must also adapt to accommodate the broader changes in the economy, society and environment.

‘There is a common ethical thread in legislation when persons are placed in a position of trust and are tasked to protect the interests of its members.’

Dokakis calls for ‘regular and effective transparent disclosure – in clear, plain language – to all stakeholders in all aspects such as relationships with service providers and fees’. He says the effectiveness of the board will encourage ethical behaviour and increased member activism.

‘This can be achieved through integrated reporting but also through setting minimum requirements on the frequency and type of communication. Board composition as well as committees should be reviewed to ensure that objective decision-making is introduced – boards should consider a greater use of independent trustees.’

He explains that the act requires principal officers and administrators to whistle-blow where this is necessary and how the act also holds directors of companies personally liable for the non-payment of employers’ pension contributions.

He says Pension Fund Circular 130: Good Governance of Retirement Funds has in its preamble the following statement: ‘The board shall at all times act with the utmost good faith towards the fund and in the best interests of all members.’

Collectively, retirement funds governed by the FSB have more than R3.2 trillion worth of assets under administration– an amount that, if mismanaged, will affect the livelihood of its members as well as that of all South Africans, says Dokakis.

‘It will negatively impact the triple context. Mismanagement will affect confidence in the retirement industry and jeopardise government’s initiative to encourage citizens to save,’ he says.

‘The Institute of Retirement Funds, Association for Savings and Investment South Africa and Batseta are just some of the organisations involved in ensuring that trustees and retirement funds are adequately resourced to meet the various challenges. If a trustee cannot discharge their duties, they need to leave the board,’ he says.

However, Swanepoel says that in general, retirement funds in SA are well governed by their boards of trustees, bar a few exceptions. ‘The trustees duly take into account their legal fiduciary duties and responsibilities towards the fund and its members and beneficiaries,’ he says. ‘The preamble to Regulation 28 under the Pension Funds Act states as follows: “A fund has a fiduciary duty to act in the best interest of its members whose benefits depend on the responsible management of fund assets. This duty supports the adoption of a responsible investment approach to deploying capital into markets that will earn adequate risk adjusted returns suitable for the fund’s specific member profile, liquidity needs and liabilities.

“Prudent investing should give appropriate consideration to any factor that may materially affect the sustainable long-term performance of a fund’s assets, including factors of an environmental, social and governance character. This concept applies across all assets and categories of assets and should promote the interests of a fund in a stable and transparent environment.”’

Swanepoel says that as stated in Circular 130, the purpose of good governance of a fund is to ensure that ‘the benefits are optimised and the associated investment risks are minimised, with these opposing concepts being appropriately balanced against each other’.

Meanwhile, a recent information brochure by the Institute of Directors of Southern Africa states that in terms of King IV, governance of pension funds starts with a focus by the trustees on their own (individual and collective) character and behaviour.

This sentiment is echoed by Muvhango Lukhaimane, the Pension Funds Adjudicator. ‘Boards of management of pension funds have a fiduciary responsibility towards the fund and its members,’ she says. ‘As a result, they must be fit and proper persons, who make their individual character and behaviour of paramount importance. They must be beyond reproach in any governance-related matter.

‘Collectively, they must hold each other accountable for good governance of the fund and owe a duty to the fund and its members to exclude any person from their ranks who has been associated with maladministration of any other organisation.’