The Eastern Cape’s 170 000 km2 are home to just 12% of SA’s population, yet the province fights well above its weight class when it comes to natural diversity. Some 800 km of coastline, 74 mountain passes, four of the country’s best parks, seven biomes (the highest biome diversity of any province) and the big five set it apart. That all translates to an embarrassment of riches for the casual or seasoned traveller – it’s not hard to find the extraordinary.

Many come to the Eastern Cape for the wildlife, and there’s plenty of it. Plenty of choice about where to stay, too. The safari motherlode of the province is naturally Addo Elephant Park, world renowned and an easy drive from Gqeberha. Bordering Addo is Shamwari Private Game Reserve, created in 1992 by entrepreneur and conservationist Adrian Gardiner. Today the whole area is central to efforts to maintain the province’s enviable biodiversity. It’s also a superb place to have a holiday. The traditional homestead of Founder’s Lodge, now run by the Mantis Group, is popular with overseas and upcountry khaki sophisticates. It’s a well-realised historical redux of a settler homestead, history every-where in the photography, architecture, ambience and attitude. Founders was recently complemented by the Founder’s Railway Carriage, a new, exclusive-use train carriage stationed on top of a nearby hill, within the Founders private reserve. The carriage features an outdoor deck, private swimming pool, dining area and private boma. This sort of accommodation has become very popular – down in Kruger the Shalati Train near Skukuza is doing a roaring trade. 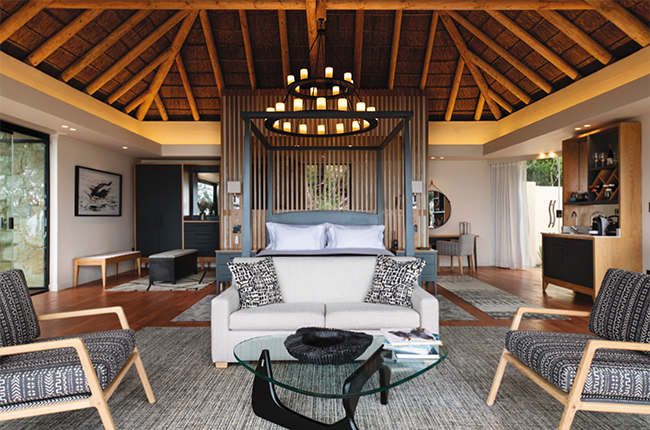 There are dedicated staff at Founders and no set routine. Guests can make their own rules and set the agenda for the day; game drives, walks, spa treatments, picnics, anything goes. It’s also understood that there will be much lounging by the pool and tall stories around the boma fire.

Inland from Founders is Kuzuko Lodge, high up on a hilltop in the Winterberg mountains overlooking the Kaboega plains, well off the N10. It recommends itself for the combination of old-fashioned thatch-and-stone chalets and spectacular views. Each designer unit has a private balcony overlooking the watering hole, far, far below. Much as the game drives through the private reserve, the mountaintop sundowners and the hikes to the substantial cave system are appealing. It’s tough not to just kick back and take in that view, cosseted in a suite that is so beautifully presented.

Two hours directly east of Kuzuko, the Great Fish River Lodge is arguably the best of the accommodation in the Kwandwe Game Reserve. Kwandwe is of course all about the great river, which flows from Graaff-Reinet to Seafield through the wilder parts of the province. Kwandwe is high up in the river’s course, 40 minutes from Makhanda (formerly Grahamstown). The nine-suite thatch lodge itself is on the banks of the river, suites linked by raised walkways. Each has its own pool and deck as well as indoor and outdoor showers. 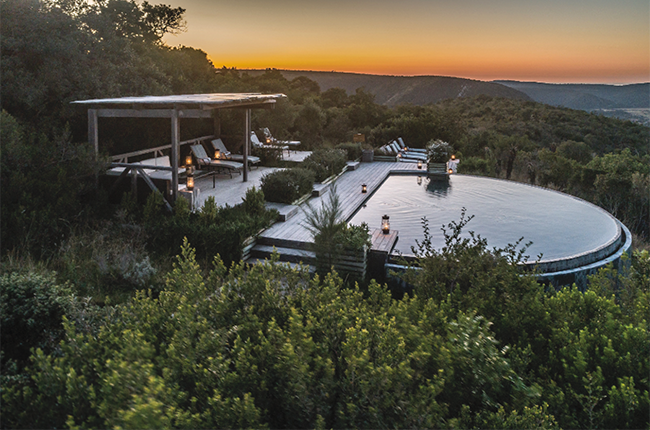 There’s a feeling of total privacy, space being the primary selling point, and the river’s wild population is often all that is heard or seen. Expect kudus to walk by and a multitude of bird species to visit the deck area. For more serious explorers, game drives are available (Kwandwe is a big five reserve), as are guided nature walks and big-game hikes.

Further inland, beyond the coastal belt and into the famed Camdeboo, are two lodges, both making full use of Eve Palmer’s extraordinary landscape. Mount Camdeboo Private Game Reserve is close to Graaff-Reinet and home to a number of endangered species, including cheetah, that have been successfully rehabilitated and reintroduced. The lodging on offer is wide-ranging: three restored, historic Cape Dutch houses or two luxury safari tent camps. Whichever is chosen, it’s the landscape that will always win out, and indeed game drives are an exercise in wonder: vast expanses of emptiness bordered by the heights of the Sneeuberg range. The night drives to catch the aardvarks at work are recommended (the Camdeboo is a prime site to see these mostly nocturnal wanderers), as is heading to the Valley of Desolation just outside Graaff-Reinet. Up there, with cliffs falling away to the valley below, it’s easy to imagine the sea floor that typified this part of the Karoo. 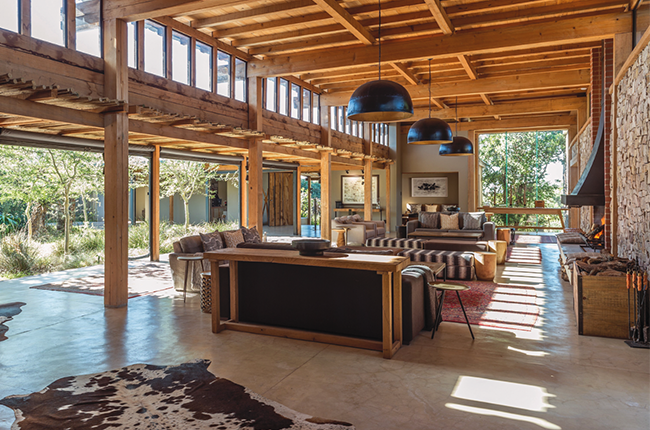 Next door to Mount Camdeboo is Samara Private Game Reserve, another rewilding epicentre of the Great Karoo, known for its cheetah population and its hot-air balloon rides over the Camdeboo. The reserve is a full 27 000 ha, but the goal is more than 500 000 ha in a few years’ time. Of the two houses on offer, the Manor is probably the one to recommend, a fusion of settler traditions and contemporary architecture. There are four suites within the villa, and the house can be part rented or taken as a complete unit. It’s popular with large groups and families, who can be together but entirely private, all at the same time. Staff are on hand to cater or host; guides suggest itineraries, but just like Founders, the pace of the visit is dictated by guests.

The Eastern Cape coast extends from just east of Storms River Mouth all the way to Port Edward. In the far west, one of the province’s most diverse towns, St Francis Bay, is home to Keerweer Canal House. As the name suggests, it is on one of the town’s famed canals, a tidal system that sets it apart from most of the region’s other leisure hotspots. There are five bedrooms under thatch, most with special views of the water’s edge. The inside-outside entertainment area is a good spot for sundowners and to watch the comings and goings of village life, which, as you’d expect, happens mostly on the water. St Francis Bay is known for its impressive surf (and popular beaches), but for a more private sun-soak, the private pool is the go-to.

Further east, Gqeberha’s reinvention as a serious player in the tourism sector – infrastructure has been upgraded, the seafront rehabilitated – means the city is fighting fit and ready to welcome back the Garden Route trekkers. It’s always been an important gateway and looks set to grow its regional importance.

Accommodation in the exclusive strata is limited, however, which is why the Mantis Group’s No 5 Boutique Art Hotel in Summerstrand is a breath of fresh air. The seven-suite guesthouse is within walking distance of the city’s key beachfront area, but what really sets it apart is the art on display. The hotel has made it front and centre the most important element of the ambience. Many of SA’s foremost artists are represented, and the work adds another layer to the history of the place, which is a protected Art Deco building. The suites are huge, with four-poster beds in some. There’s a fine-dining restaurant, private dining cellar, whiskey and cigar lounge, private cinema and spa on the premises. No 5 works well as a destination in itself, or as a landing base for a surf and safari week.

Further up the coast things get wilder, quickly. Settler’s Drift, in the Kariega Reserve, is less than an hour from Gqeberha and trades in surprises. Tents are the accommodation, but not just any tent. Set among the towering euphorbias, they’re as luxurious as it’s possible to be, enormous, with balconies to best capture the view of the indigenous landscape and riverine wildlife. There are five biomes here – ranging from valley bushveld to acacia woodland – so nature lovers are Settler’s main stock in trade. That said, it’s not all hikes and birding – there’s a spa offering a wide range of treatments, a superb pool and the cuisine is worth writing home about. 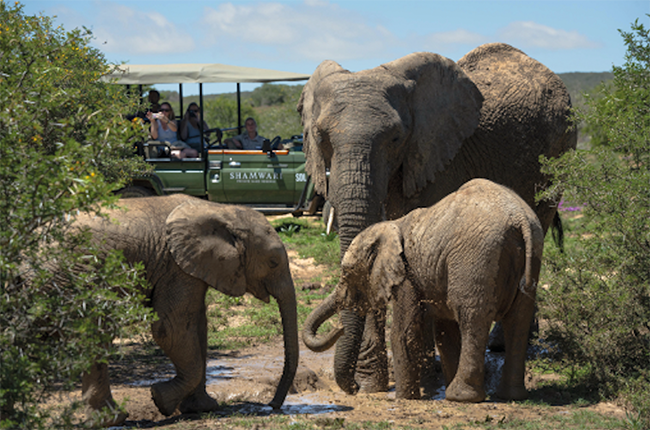 Further east still, around the small town of Port Alfred and set on the beach in its own conservation area is the Oceana Boutique and Wildlife Reserve. It’s a 12-suite lodge built of thatch and stone with enormous picture windows to take in the breadth of the sea views.

The main public areas play to the same tune: huge verandas, balconies and walkways accent the sea and the beach. The pick of the accommodation is undoubtedly the Beach House, which sleeps six in three bedrooms. It has its own pool, double-volume entertainment area and is serviced from the main lodge. It’s not likely guests will want to wander far, but the nearby town has a very decent golf course and a selection of good restaurants, notably the Thistle at the Royal St Andrew’s Hotel, which plays with traditional and contemporary cuisines to great effect.

The Eastern Cape’s reputation as the touring province is well-earned – only the Western Cape can rival it for road infrastructure and the standard of both tar and dirt routes is remarkably good. It lends itself to exploration, either planned or casual, and a trip there inevitably leads to another and another. The coast is the obvious attraction, but that’s to short-change the province. The vast interior is a mix of mountain grandeur – Mountain Zebra National Park, Hogsback in the Amathole Mountains and Camdeboo National Park are great examples – and cultural diversity (Helen Martins’ Owl House in Nieu-Bethesda draws thousands every year). For locals then, a touring journey is absolutely recommended, not just for the wildlife and beaches, but to understand the depth and breadth of the country’s most historic and engaging province.