As far as technologically developed countries go, Singapore is a Goliath. In 2014 it launched its Smart Nation initiative, with the aim of improving living circumstances and creating opportunities for its citizens, specifically with regard to how well Singaporeans employ technology to solve problems. Internet usage in Singapore is at 81% of the population, according to 2016 statistics by the Organisation for Economic Co-operation and Development (OECD), an important driver in technological advancement.

The initiative focused on five key areas in which digital technology plays a major role: transport; home and environment; business productivity; health and enabled ageing; as well as public sector services. Lawmakers in Australia clearly saw this development as an opportunity for trade and investment. The Australian government wrote in an online post: ‘There are also policies in place to facilitate innovation and nurture a culture of experimentation, innovation, risk-taking, and eventual adoption of new ideas.‘In Singapore, the infocomm and communication technology [ICT] sector is a key enabler for almost every industry sector, and has enhanced Singapore’s competitiveness by raising productivity and transforming business processes in industries like finance, services and manufacturing,’ it adds. ‘Australian developers can leverage opportunities in Singapore, particularly those related to developing applications and contributing to building the Smart Nation infrastructure.’

Five major areas of focus for the Singaporean government were cybersecurity; internet of things; immersive media; AI; and data science. Singapore continues to be the regional base for Microsoft, Oracle, Amazon Web Services and Google as well as a host of tech start-up companies. You get the point… So where does this leave trade and investment relations between Africa and Singapore? 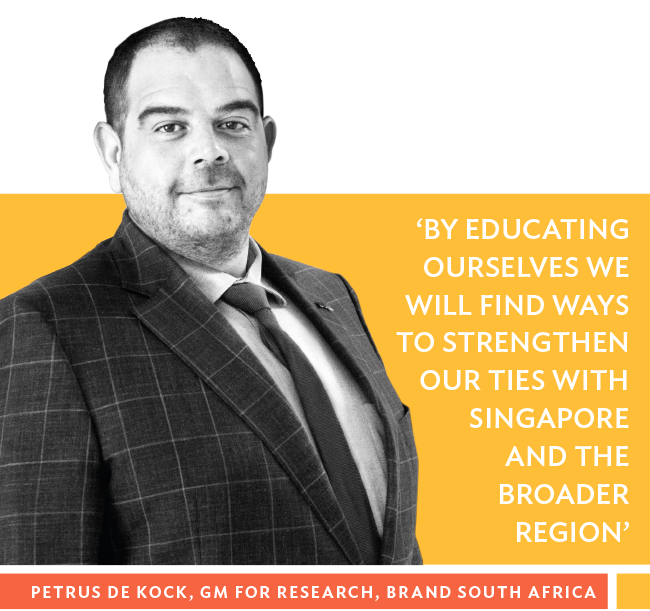 In 2016, Singapore was the seventh-largest foreign investor in the continent, with direct investments totalling $17 billion. At the time there were more than 60 Singaporean companies doing business in Africa. These companies were, and still are, particularly interested in East Africa for what government agency Enterprise Singapore called ‘collaboration opportunities within the domestic private sector for mutual wins.’ It listed four significant motivating attributes of African regions, specifically East Africa, including ongoing infrastructure development with well-structured and bankable projects; economic diversification; regional integration and trade connectivity; and ‘the rise of the urban consumer’.

Yet there’s a notable lack of information about Singapore in SA, or vice versa. Especially seeing as SA’s fintech sector is growing exponentially, is the strongest in Africa (94 of the continent’s 301 start-ups) and can compete globally. As early as 2015, the Australian government had already identified the tech sector as a lucrative destination for investment, so why hasn’t SA followed suit? Or have we?

SA is arguably the epicentre of the fintech sector in sub-Saharan Africa, says Jan-Erik Behrens, partner at transaction advisory services, EMEIA financial services, at EY Germany. It harbours about a third of the firms in the region, which are located predominantly in Cape Town and Johannesburg. ‘As the most diversified hub, it exhibits great similarities to more developed markets. The sector has an extensive network of venture capitalists and angel investors, and is home to many accelerators and incubators,’ he says in an online post.

Kenya is the second-largest sub-Saharan Africa fintech hub, hosting around 20% of the entire region’s fintech landscape, and has a stronger focus on the payments segment. ‘The Kenyan hub is located in Nairobi, which is home to more than 50 fintechs [that] are already one of the main drivers for financial inclusion in the sub-Saharan region,’ says Behrens. ‘Both private and public investors worldwide have started to pay more attention to the development of fintech companies in sub-Saharan Africa as is evidenced by a steady increase in investments the market. Overall, the sector exhibits promising signs of accelerating growth, ample investment and new business opportunities.’

In July this year, Media giant Naspers, through its e-payment business PayU, invested in a majority stake of Singapore e-payment company Red Dot Payment, totalling $65 million. ‘It allows PayU to plant its flag in South-East Asia,’ the company says in a statement. PayU will integrate RDP platforms into the PayU Hub. Red Dot was founded in 2011 by experts from Fortune 500 companies, and the payments solutions firm has since grown into one of Singapore’s best-known fintech start-ups. 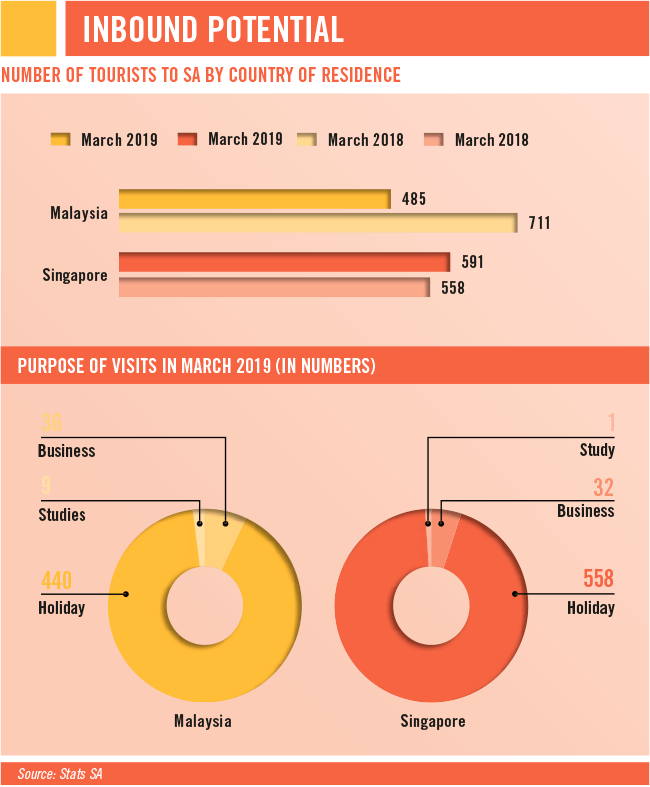 In November 2017, Singaporean and Malaysian ambassadors travelled together to SA to meet with local manufacturers, a first joint business mission for the South-East Asian nations. The mission coincided with the inaugural Africa-ASEAN Business Expo and Forum, both of which were held at the Sandton Convention Centre, where manufacturers and distributors from the 10 ASEAN nations met SA and pan-African trade partners.

The group was led by the Singapore Manufacturing Federation and the Federation of Malaysian Manufacturers. ‘Investment in areas that foster digitalisation and the [Singapore] government’s commitment to continue pouring funds into its social and infrastructure agenda are a boon to the country’s potential output,’ according to the Economic Outlook for South-East Asia, China and India 2018 report. ‘Inward FDI flows provide the necessary capital to fund investment in ICT and are arguably among the best ways to access technological spillovers.’ Moreover, an openness to trade and attracting FDI into the ICT sector have played a notable role in supporting the rise of China, Malaysia, Singapore, Thailand and Vietnam as major global suppliers and exporters of ICT, the report states.

The WEF has for the past 11 years carried out an in-depth analysis of the travel and tourism competitiveness of 136 economies across the world and releases an annual Travel and Tourism Competitiveness Index. Indices include ‘a set of factors and policies that enable the sustainable development of the travel and tourism sector, which, in turn, contributes to the development and competitiveness of a country’. Singapore ranks 13 on this 2017 list, and Malaysia 26. ‘Countries in South-East Asia offer competitive prices and take advantage of their natural resources to attract tourists.

While cultural resources are available, to date they have been less valued than natural assets,’ according to the WEF report. Furthermore, ASEAN nations are also inclined to prioritise tourism as part of their development agenda seeing that most of them are ranked above the 50th position in this specific pillar. ‘Still, a large infrastructure (air, road and tourism service infrastructure) and ICT readiness gap remains between the most advanced in the sub-region, especially Singapore and, to a lesser extent Malaysia and Thailand, versus the rest.’

At a 2017 event in Singapore, hosted by Brand South Africa and the SA High Commission in Singapore, Petrus de Kock, GM for research at Brand South Africa, said that Singapore and SA are global examples of economies that have transformed themselves in a short period of time, but ‘while Asia’s growth story is well understood around the world, findings from a recent research project indicate that in Asia there are not similar levels of understanding regarding the business and investment opportunities in South Africa’.

The aim of the event was to enhance SA’s trade and business connections with Singapore, as well as the wider Asia region. ‘We hope that by educating ourselves on the Singapore business community’s perceptions of South Africa as a business and investment destination, we will find ways to strengthen our ties with Singapore and the broader region. This, in turn, will help us raise levels of awareness regarding the business and trade opportunities available in South Africa and in doing so increase the appetite for investment in our nation-state,’ says De Kock.

In its 2017 African Statistical Yearbook, International Enterprise Singapore identified SA as a giant economy in the southern part of the continent, highlighting the opportunities for Singaporean companies in power generation and the hospitality sectors, as well as niche sectors such as education services.

According to South African Market Insights, Singapore was ranked 30th among the top 30 countries for tourist numbers to SA in December 2018, with 1 218 Singaporean tourists visiting SA’s shores. For perspective, we received 52 339 tourists from the UK over the same period. Interestingly, the reason for travel was listed as business on just 12 of the Singaporean visits over this time.

Maybe there’s more to glean from this last statistic than simply deducing that Singaporeans enjoy our shores as a holiday destination. Twelve seems an unbelievably low number, given the potential to be so much more.