Every year presents itself as the ‘Year of…’. 2015 was the Year of the SUV, 2016 the Year of the Crossover. And 2017 will be the Year of the Convertible, with no less than 21 new droptops destined to liven up our roads this year – a welcome sight in a sea of white hatchbacks.

Mercedes-Benz
As has been the norm these past few years, Mercedes has led the charge, using a phalanx of cabriolets to underline their new strategy of unashamed luxury, indulgence and pampering. Prices are not for the faint-hearted but quality, variety and ability are improved. The S-Class, E-Class and C-Class all get droptops for 2017, while the venerable SL soldiers on and the ageing SLK gets a second life as the SLC. But standard-bearer to the battle is the bruiser of all bruisers – the AMG GT S Roadster, which loses its roof along with any semblance of civility.

Of the team, the C-Class, E-Class and Roadster deserve detailing. Arguably the most interesting (and certainly the most sensible) droptop for Stuttgart is the C43 AMG Cabriolet. The new C-Class sedan and coupé have been an unqualified success, and their excellent underpinnings make an appearance here. The roof is cloth, a three-piece work of intricate craftsmanship with the more or less standard C-Class interior slightly smaller than the comparative sedan and coupé versions to accommodate the roof mechanism.

However, the real talking point is the engine – a new V6, tweaked here in AMG specification to deliver 270 kW and 520 Nm of torque. Certainly it’s fast, but two things recommend it over the larger V8 C63 – responsiveness and balance. In the cabriolet, the matching is near perfect – ideal for enjoying the aural fireworks (the C43 is one of the throatiest engines around at the moment), quick enough to hound the hatchback hooligans and serene enough when required.

The R400 000 saving over the C63 is significant, but it’s also better balanced in cornering, lighter, more communicative and significantly more economical.

Due midyear, the C-Class Cabriolet’s bigger brother, the E-Class Cabriolet, also sports a fabric roof and will be a true four-seater where the C-Class is essentially a 2+2, whatever Mercedes says. But the E-Class’ real party trick is its technology. The recently launched sedan is the most complex automotive machine made yet – no thoughtless boast.

Driving it in Lisbon recently, I got the first real sense of autonomous driving – hands-free, feet-free and worry-free. The E-Class drives itself, talks to itself (and other Mercs) and sports 112 industry firsts, from full LED lighting (inside and out) to driverless parking. All of this in one of the most comfortable, dynamically capable Mercedes in years. And the convertible wins back a degree of individuality missing in the sedan, which looks for all the world like an inflated version of its C-Class sister.

Finally, stand back for the insane – the bouncer in the pack, the AMG GT S Roadster head butts its way into the ring with 375 kW of V8 aggro, sans roof, sans sensibilities, sans much of anything except speed, noise and attitude.

The roadster gets a tiny fabric roof (this is a dedicated two-seater) and a small boost in power over the coupé to compensate for the extra strengthening weight (10 kW). And Mercedes may decide to bring the even more bonkers 430 kW GTS R Roadster to the country. It only comes in Hell Green, which tells you all you need to know.

Audi
Two highly anticipated Audis will be released this year, the R8 Spyder and the all-new A5 Cabriolet. The Spyder adds a degree of whoopee to the range – the recently released coupé is very grown up, a left-brain supercar that has precious few flaws but lacks a certain joie de vivre. Without its roof the 449 kW naturally aspirated V10 Valkyrie awakens the child in you, even as it frightens the life out of onlookers.

Differences are minor – the glass engine cover of the coupé is replaced with a vented lid, but the interior and exterior remain the same. There’s now only one transmission – the vastly improved S-Tronic automatic, fed to the automatic Quattro all-wheel-drive system.

Arguably more important for Audi is the exquisite, all-new A5 Cabriolet, needed to compete against the highly acclaimed BMW 430i Cabriolet. The A5’s redesign (improving on perfection was no easy task) has been generally well received and the cabriolet certainly stands out – it’s significantly better looking than its slabby predecessor.

Launch engines will mirror the sedan and the new suspension system accents comfort rather than sportiness. There are a number of innovations, such as the now standard microphones mounted in the seatbelts to mitigate against wind roar when using the telephone. The sports-orientated S5 will feature a redesigned V6 3.0l petrol engine rather than the much-loved 4.2l V8. 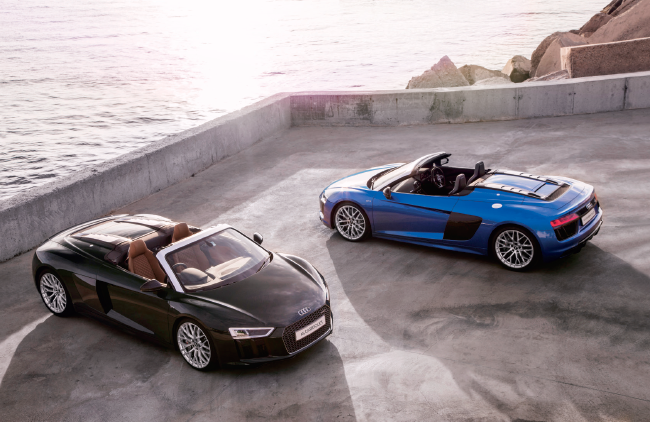 BMW
BMW’s successful 4 Series Cabriolet, launched last year, is followed later this year with the i8 Spyder. It was touch and go there for a while, with BMW unsure of the viability of an open-top supercar. But ever conscious of what Audi are doing with their R8, they saw the light – and indeed went one better, offering the electric hybrid supercar complete with its characteristic scissor doors.

There’s a new lithium-ion battery pack for longer range too, as well as AirTouch – a novel if odd innovation for changing settings without actually touching any of the controls.

Mazda
It says a great deal about the marque and the car itself that Mazda’s MX-5 RF features on our list here, and it’s ironic that the best-value convertible on our market is also the most fun and potentially the best investment.

For 2017, the iconic little roadster gets a targa roof – a metal ceiling that lives under a lid when not in place. It’s a bit more interesting than that. The boot lid incorporates high-side buttresses and an upright rear window that gives the car the look of a coupé. Three cars in one, clever Mazda.

For the rest, there’s an optional six-speed automatic gearbox rather than the six-speed manual. The engine stays the same, a naturally aspirated 2.0l unit driving the rear wheels. 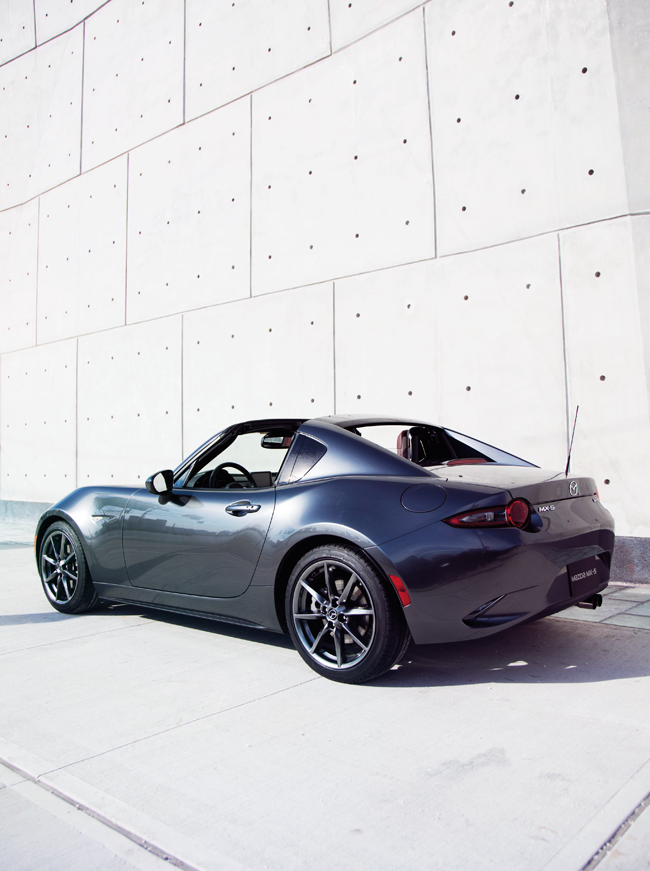 Porsche
It’s been a tumultuous two years for Stuttgart, wrestling with the changes to their engine line-up and fending off Audi and Ford in the World Endurance Championship Series. All good though, evidently what doesn’t kill you makes you stronger – the latest soft tops from Porsche cementing their reputation for quality and excitement. 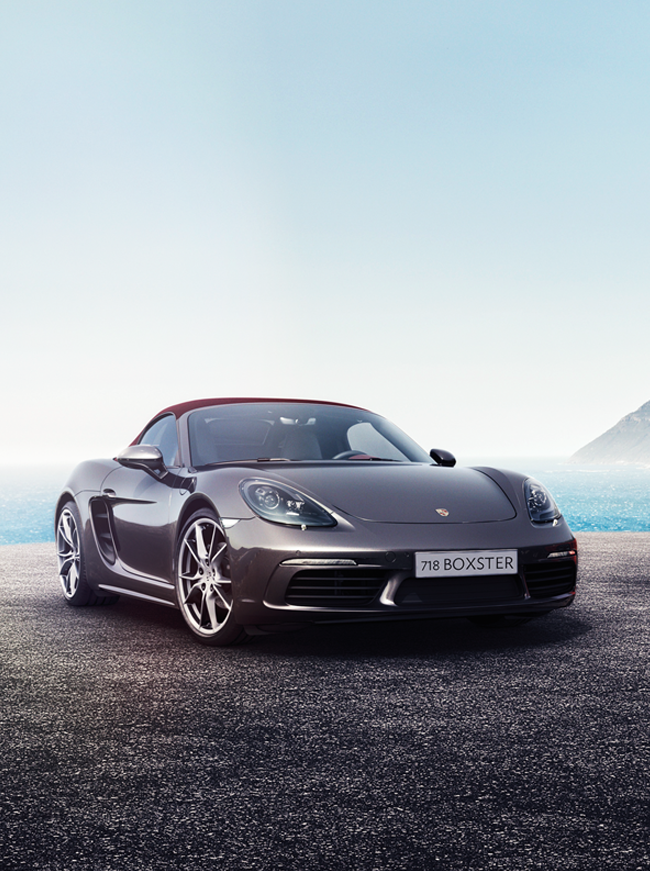 Chief among the newcomers is the much-anticipated entry-level 718 Porsche Boxster. It is down two cylinders but up a twin turbocharger, with two versions available (the S getting the larger bore 2.5 four-cylinder engine and an increase of 22 kW over the conventional 230 kW Boxster).

Subtle tweaks to the body have also worked well, especially at the rear – it’s now a curvaceous, contemporary cruiser where the previous model was decidedly lumpy. After all the brouhaha about loss of identity with the engine change, the new four-cylinder unit is sweet; in-gear acceleration is strong and linear; economy is excellent; and the drive is textbook Porsche – fast, smooth and seamless. The new interior takes a leaf out of the recently revamped 911 with touchscreen functionality and a dearth of buttons, once a Porsche mainstay. Quality, naturally, is peerless.