BEST OF BOTH WORLDS - JSE MAGAZINE

Ten years ago it may have been a stretch to imagine what Micha-Rose Emmett, group MD of CS Global Partners was suggesting when she said that everyone in the world should consider investing in a second citizenship. At the time, she recalls, many thought her somewhat ‘nutty’ yet today her advice is heeded.

‘Yes we live in perilous times,’ says Emmett. ‘But it is not just safety and security that drives a second citizenship – it’s about having options.’

Emmett describes a second citizenship as ‘the insurance policy of the 21st century’ adding that it is no different from having a diversified portfolio of investment assets. ‘Neither is it just for high-net worth individuals. A second nationality is particularly relevant in an ever-changing, challenging and narrowing geopolitical landscape. Those considering dual citizenship need to ensure that the decisions they make about their future and that of their families does not immerse them in further upheaval or instability.’

This is the niche market that CS Global fulfils. It’s not your average immigration firm, which aids with the issuing of visas, although part of its role may include that. It concentrates on citizenship solutions, a term coined to describe an all-encompassing advisory and bespoke professional service that will tailor-make relocation citizenship to suit individual needs. Emmett advises that there are three main reasons people consider dual citizenship. Namely safety and security; financial security and wealth protection; and lifestyle.

While some years ago having a second home in a foreign country seemed the privilege of only the rich or famous, CS Global has experienced an increase in the number of applications for second citizenship, with most families citing the future security and safety of their children as the dominant reason. This also aligns to their medical and educational needs, particularly in environments where both those sectors flounder. 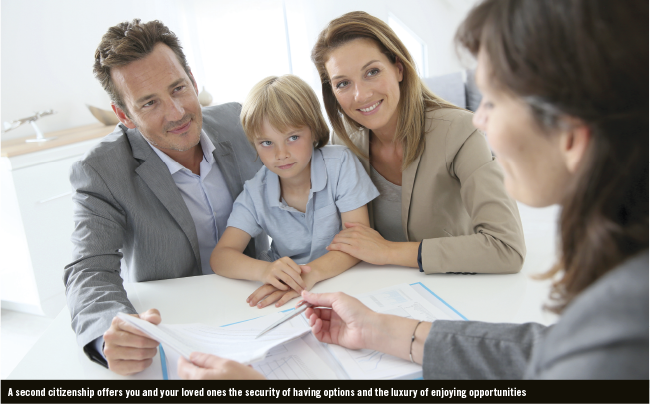 Economic crashes too are seriously affecting the way people invest. It’s no longer simply about earning interest or seeking high-earning investments – people want to ensure sustainable wealth and, as we have seen over the past decade, markets are volatile and reactive to even the most deceivingly simple national and international incidents. As we have also witnessed, such incidents occur equally in developed and undeveloped nations leading people to expand their portfolio of opportunities.

‘Yet another reason for dual citizenship is the ability to travel visa-free across an increasing number of nations, making travel more affordable and accessible,’ says Emmett. ‘Such mobility is proving advantageous, particularly to business people who seek new global opportunities and investment arenas within sustainable development environments.’

That said, where to go? Traditionally the UK, US, Canada and Australia have been favoured, largely because they are trusted jurisdictions with proven strong rules of law, and a stable political and financial environment, enhanced by world-class services.

CS Global, however, focuses largely on the Caribbean islands of St Kitts & Nevis, the Commonwealth of Dominica, St Lucia and Grenada, the first of which has the oldest ‘citizenship by investment’ (CBI) programme in the world – in operation since 1984 – and which has been adopted by other Caribbean islands.

‘Citizenship by investment means a potential citizen must make a contribution to the country in order to qualify for citizenship, as long as they satisfy the due diligence requirements,’ says Emmett. ‘What makes the Caribbean model a superior offering is that there is no need to spend time in that country, unlike other countries, where substantial residence is a prerequisite and therefore very limiting to those unable to support frequent travel between their international homes.’ 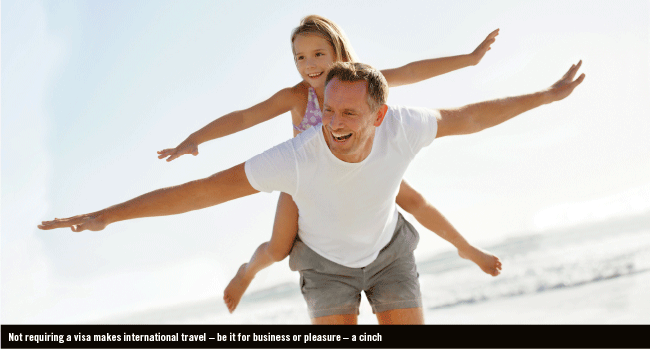 In as little as three months from submission of an application, CS Global can facilitate a dual citizenship in one of the five Caribbean destinations they specialise in through any one of its 10 global offices.

Once a client’s documentation is completed (which can take from one to six weeks), CS Global submits the file to the relevant government on behalf of the client, which in turn commissions an internationally recognised third-party agency to undertake a due diligence report.

‘The checking process is thorough, yet there is comfort in knowing that the applicant is a legitimate and respected person,’ says Emmett. ‘Once approved, indicated by the issue of an “in principle” letter, the applicant must make the investment into a government fund or real estate.’

That it can be a stressful application process is minimised by CS Global’s due care of providing a dedicated full legal team to each application. ‘At least two legal minds are involved throughout and, given our international team and ability to communicate in at least 12 languages, we are also culturally sensitive to clients’ needs, and the sometimes prolonged waiting time.’

In many instances, CS Global flies its teams out to meet clients so that they can acquire a sense of the client’s lifestyle – which, says Emmett, is a crucial component of being able to finely tune a dual-citizenship package. Further, CS Global works directly with governments and, in some cases, is even mandated by them to help formulate, develop and market citizenship programmes, as is the case with St Kitts & Nevis, the Commonwealth of Dominica, Grenada and St Lucia. This provides the organisation with knowledge of desired changes in the law, often before implementation.

‘We are deeply connected to this market and invested in understanding the nuances of our clients and the destinations that best suit their needs,’ says Emmett. ‘The concept of the world becoming a smaller space now means that having even more than two homes around the world is a geographical and affordable possibility for anyone.’