In 2013, the JSE amended its listing requirements to provide for the listing of special purpose acquisition companies (SPACs) for the first time. While SPACs are still a novelty to the SA market, these ‘clean shell’ entities, which hold cash as their only asset at the time of listing, have been on offer on some international markets – such as the New York Stock Exchange – for about 20 years, according to Lloyd Hughes, Business Development Manager of Capital Markets at the JSE. Much of the success of a SPAC depends on the experience, skill and acumen of the management team, he says.

A SPAC is a publicly traded shell that has a specific mandate to acquire or merge with other companies or assets.

Currently, one would list an already formed asset or company on the JSE. However, with a SPAC, you raise the capital first and then acquire the company or companies. It can be seen as a ‘reverse’ initial public offering, or as cash shells that float to raise capital for investments.

M-Fitec International also listed in November last year and aims to pursue acquisitions in the fintech space with a particular focus on developing markets. Lastly, Hulisani, which is focused on energy possibilities, listed in April.

Only an experienced management team with prior M&A or operating experience can list a SPAC, says Hughes. ‘Directors must have a direct interest in the company themselves and, in order to list on the JSE’s Main Board, it requires an injection of R500 million – and for AltX, the bourse’s alternative exchange for small and medium-cap companies, R50 million.

‘The management team then has 24 months in which to make either an acquisition or to merge with other companies or assets as set out in the acquisition criteria of the JSE. The merger or acquisition must satisfy the basic listings conditions of the exchange. SPACs are in many ways an alternative to raising capital for acquisitions.’

The benefits to management of going the SPAC route are numerous. Business risk is minimised; it’s an effective way of creating valuable acquisition currency for M&A transactions; it increases profile visibility and deal-flow opportunities; and it incorporates regulatory safeguards that help protect all parties throughout the SPAC process. 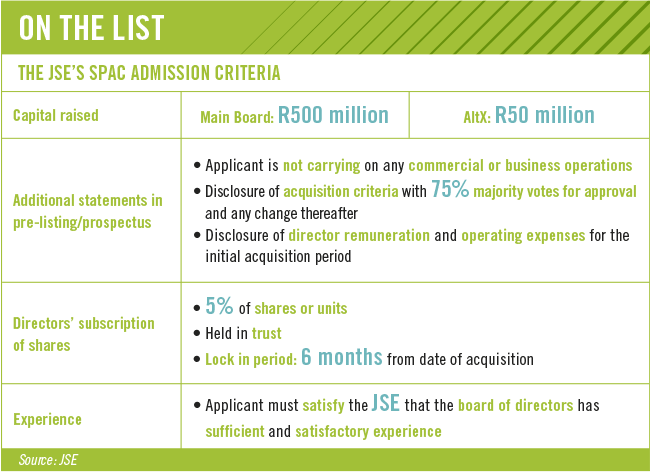 From an investor point of view, SPACs allow the public to co-invest with sophisticated managers and financiers, an opportunity thus far restricted to institutional and private equity investors. SPACs create a broader spectrum of investors. It’s an attractive environment for risk-tolerant investors to promote the formation of capital.

Turning to the potential risk to investors, Hughes says all capital raised by the SPAC must be held in an escrow account. ‘This is a separate bank account for keeping money that is the property of others. It provides the investor with a certain amount of protection. Furthermore, a 75% majority of shareholders is required to approve any changes to acquisitions criteria. Incoming investors have the potential to make significant gains by using the SPAC’s experienced management team to make a number of M&As using the investors funds.’

Hughes adds that a SPAC is not permitted to obtain additional debt financing unless it is used to facilitate acquisition of assets. ‘If no acquisitions are made within 24 months from the date of listing, the residual capital and interest earned – minus taxes and expenses – must be returned to investors, who are shareholders in the SPAC, within 60 days. A voluntary liquidation resolution also needs to be proposed.

‘Management must ensure that the capital and operating expenses are properly allocated. In fact, applicants wanting to list SPACs on the JSE must satisfy the exchange that the board of directors has sufficient and appropriate experience.’