The allure of apps, puzzles and games promising to beef up the grey matter is understandable in any context, but it’s particularly appealing at a time when the professional world requires – demands – exponentially greater ability to focus, multitask and produce more, better and in less time, from its workers.

Anything that offers an edge, an increased capacity to handle stress, make decisions, solve problems, absorb and process information, boost mental clarity and concentration – to keep ‘brain fog’ at bay – is going to be in high demand.

So great is our desire to get a handle on the 1 001 tasks, emails, deadlines, social media alerts and internet distractions that swirl around us each day, that we’re, ahem, ‘game’ for anything that offers a glimmer of a promise that it will fortify us, mentally, against the chaos, and aid us in achieving our ambitions. So we take up sudoku. Or crossword puzzles. Or we download a ‘brain-training’ app packed to the seams with games that claim to boost attention span, memory, cognitive ability and language skills.

The idea put forward is that our brain is like any other part of the body, in that we can give it a ‘workout’ with brain exercises – or dubiously dubbed ‘neurobics’. One of the most popular so-called ‘brain-training’ apps, Lumosity, invites users to ‘enjoy brain training created by scientists and game designers’, and to engage in ‘daily workouts that challenge five core cognitive abilities’. The workouts get progressively harder, so your brain remains challenged. It all sounds reassuringly sciency, and the general impression is that this app, if properly utilised, will make you, um, cleverer.

However, this has not been established. A study published in the Journal of Neuroscience last year found that brain-training games had no measurable effect. Neuroscientists at the University of Pennsylvania conducted a randomised controlled trial (considered the most reliable form of research) involving 128 young adults, which, Psychology Today reported, is more than previous studies.

For 10 weeks, some participants trained with Lumosity, while a control group played video games that weren’t specifically ‘targeted for executive function’, as Lumosity does. ‘Participants in the commercial training condition improved with practice on the specific tasks they performed during training, but participants in both conditions showed similar improvement on standardised cognitive measures over time. Moreover, the degree of improvement was comparable to that observed in individuals who were reassessed without any training whatsoever.’ In other words, Lumosity’s ‘brain training’ had no measurable benefit. The study concluded that ‘commercial adaptive cognitive training appears to have no benefits in healthy young adults above those of standard video games for measures of brain activity, choice behaviour or cognitive performance’. Lumosity was slapped with a $2 million fine by the Federal Trade Commission in the US for false advertising.

Neuropsychologist Digby Ormond-Brown, based at Netcare Rehabilitation Hospital in Johannesburg, confirms that the bulk of research suggests there is no significant benefit to brain games. ‘While there are intermittently tantalising and promising research papers that appear to suggest mentally challenging games might boost brain function, the bulk of the evidence suggests that they do not. The critical evidence comes from so-called meta-analytic studies that consider the results of hundreds of research studies in a particular area and provide a useful overview of these interventions,’ he says. ‘Crossword puzzles, sudoku, picture puzzles and the like have been tried. In addition, specific techniques have been implemented that utilise neuroscientific knowledge to try maximise brain function. Meta-analytic studies suggest that these interventions are not efficacious when rigorously and carefully tested.’ 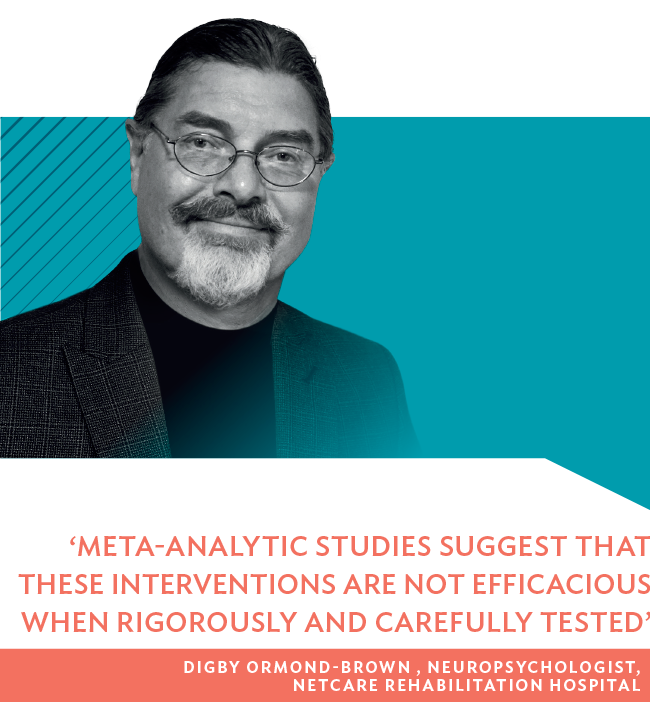 Perhaps, he adds, the fundamental problem with mental exercises is that the benefits do not extend to improved general brain function in a broad manner. ‘So you become very good at sudoku, but it does not help you to do calculus. Or you become very good at a memory game, but you still forget where you put your keys and forget people’s names within two seconds of being introduced.’ So does that mean you should ditch your sudoku, toss out your crossword book and delete all your brain boosting apps from your phone? Only if you don’t enjoy them.

It’s worth noting that these types of activities are not completely without benefit. ‘Playing games like puzzles, crosswords or digital brain games instead of, say, watching TV, is great for mental maintenance or even small improvements – just like taking the stairs instead of the elevator will keep you healthier and even help you lose a few kilograms,’ says Dalena van der Westhuizen from BrainRx South Africa, the local branch of the largest international personal brain-training organisation in the world.

BrainRx offers various intensive one-on-one brain-training programmes to improve cognitive function and is backed by various published controlled trials, various clinical trials currently in progress or being submitted for peer review, as well as a randomised controlled study on the effectiveness of their programmes, published in the journal Applied Cognitive Psychology in 2016.

‘If you would like to lightly “exercise your brain” from time to time, games, puzzles and online brain gaming apps are what you’re looking for. However, if you’re looking for ways to improve your ability to think on your feet, remember details, reason and negotiate better – the type of training that will give you an edge in a competitive work environment or industry or that will permanently enhance the way your brain processes, stores and recalls information – you need cognitive training.’

She likens brain training – which is more intensive and sophisticated than anything you would experience using an app – to an intense workout, and much like learning any new skill. ‘For example, brain-training exercises need to be done in a particular sequence. When done in the right order, brain training triggers the brain’s ability to physically change in order to handle increasingly demanding tasks. As the brain is forced to recruit additional neurons to handle increasingly complex tasks, it becomes better, faster and smarter,’ says Van der Westhuizen. She explains that in order for the effects to become permanent, skills acquired during brain training need to be embedded using a technique called loading. Loading involves multitasking, which makes the brain ‘fire up’ multiple connections. All this activity forces the brain to automate more familiar tasks so it can focus on newer, less familiar tasks. ‘This is a fast-track method of taking a new skill and making it a more permanent part of the brain.’ 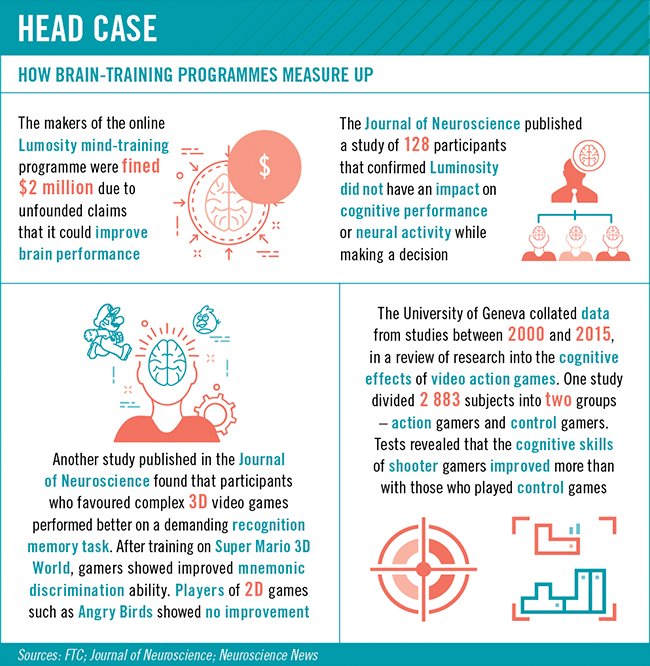 According to the BrainRx formula, if you’re giving your brain an intense workout that includes practising, sequencing and loading, you’ve created the perfect environment for maximum, lasting changes in your brain. You certainly don’t want to practise, reinforce and embed a mistake. This is why immediate feedback is critical. Without a doubt, the most effective way to create the kind of mental workout described above is to work one-on-one with a certified personal cognitive trainer. This is the fastest way to get an intense mental workout that incorporates practising the right cognitive development exercises in the right order, multitasking and immediate feedback.

It’s worth noting that there is no industry body in SA that certifies or reviews brain-training programmes. BrainRx is in the process of establishing and monitoring the standard for effective cognitive training in SA, says Van der Westhuizen. ‘We’re at a critical stage of getting a recognised reviewing and certification body or system in place for cognitive training in South Africa.’

So what if you’re after something less intense than one-on-one brain training, but more effective than sudoku? Unsurprisingly, the same advice for achieving longevity applies to staying mentally fit. In fact, you should make sure you’ve got the basics covered before even considering embarking on an intensive brain-training programme.

‘What we have learnt from neurological rehabilitation is that activities that are personally meaningful to the individual, promote brain function in a broad fashion and can be applied in the real world, tend to be helpful,’ says Ormond-Brown. ‘In other words, rather than playing games, learn a new skill.
‘This can be anything from learning to play a musical instrument, learning another language, taking a course in electrical engineering, learning to programme computers and so on. If it is not meaningful to the person, then it is not going to help to improve brain function.’

In conclusion, it seems an almost farcical irony that – in a working world obsessed with hyperfunctionality yet plagued by stress and being overwhelmed – the prescription for the ‘braininess’ we imagine will give us a competitive edge is also the prescription for a good life: eat well, rest well, get the blood moving, don’t let stress get the better of you, find out what fulfils you and engage in meaningful challenges. How clever is that?