‘Conventional mining methods are no longer a profitable manner to operate mines in South Africa, which is exacerbated by the current low commodity prices,’ Frik Fourie, head of mining at Anglo American Platinum (Amplats) recently told delegates at the Southern African Institute of Mining and Metallurgy’s 2016 Mining for the Future conference. If they are to remain relevant, mines must substantially change how they operate, he added.

One way of doing this, according to the SA Chamber of Mines (CoM), is to mechanise as well as modernise, as this will see the industry evolve to not merely replace people with machines but instead upskill the workforce and equip them with the knowledge necessary to operate this machinery. As CoM senior executive of modernisation and safety Sietse van der Woude puts it, people are at the centre of modernisation – and with this, an increased need for focus on skills development.

In a CoM report on the modernisation of mines, the chamber says this includes ‘turning to account South Africa’s mineral resources in the safest, most efficient, cost-effective and sustainable manner possible’ and ‘recognising that people are at the heart of our industry, with focus on improving skills, health, quality of life and fulfilment of employees’, among other things.

However, the CoM also acknowledges that the dynamic nature of the labour market means the sector will always face difficulties where education and skills development are concerned. The various challenges include developing the skills needed for mining, including a legacy of poor educational opportunities, along with employees having little or low levels of literacy and numeracy.

According to Declan Vogt, director of Wits’ Centre for Mechanised Mining Systems, the escalating use of mechanisation in mines affects the type of skills the mining sector needs – particularly where technical skills are required. ‘The aim of mechanisation is to take away muscle effort from people, so it makes the job more attractive and less physically demanding,’ he says. 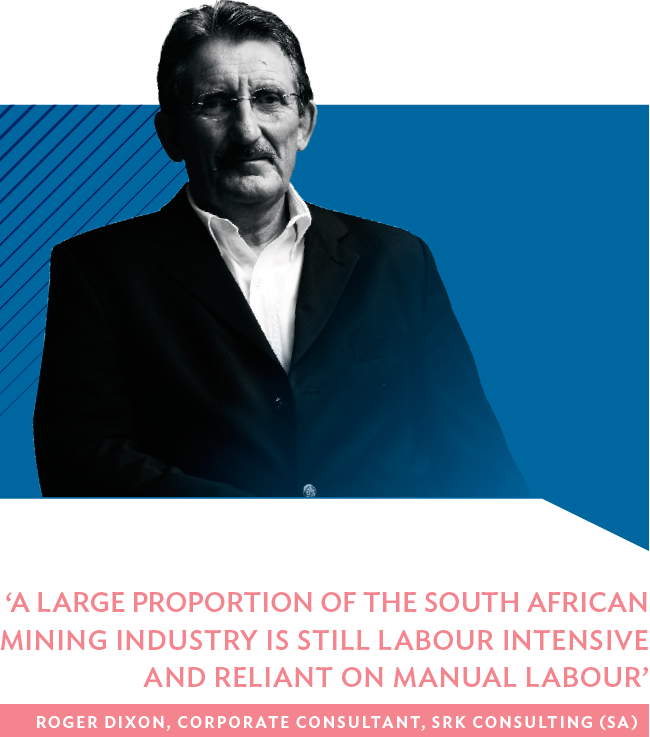 ‘Another gain of mechanisation pertains to safety – mechanised operations are safer because people are less exposed to risk.’ Vogt adds that the uptake of mechanisation in SA has been ‘slow and steady’ but is adamant that mechanisation ‘is the way to go’.

Roger Dixon, SRK Consulting (SA) corporate consultant, does not believe that current skill levels in SA mining have increased or changed to any great degree in recent years. ‘A large proportion of the South African mining industry is still labour intensive and reliant on manual labour,’ he says. ‘Skill levels increase with the advent of mechanisation and automation – areas in which we have not seen any real progress.’ He adds that education and experience are among the best ways to build skills.

According to Dixon, the skills shortage is primarily being felt at artisan level, as youths of today are not interested in learning a trade at a technical college but would rather obtain a degree from a university institution. ‘In addition to artisan skills, we have to develop the technical skills to take advantage of the electronic age that we live in,’ he says.

‘More and more of the activities in mining are going to be automated and monitored by electronic devices. The level of information available to the manager of a mining operation is going to grow exponentially, and we will require technicians to develop and operate these systems. And, of course, the engineers and managers of the future will need to have the skills to understand and act on the available information.’

Vogt shares this sentiment. ‘There’s a shortage of skills at all levels but an acute shortage at artisan level,’ he says. ‘This is going to be a problem for a while. There’s a new scheme coming for artisans but it’s too early to say if this will make a change.’ Many of SA’s unskilled workers are functionally illiterate, he adds, making it difficult to train them for a highly technical career.

Niel McCoy, key account manager at Sandvik Mining and Rock Technology, says major mining companies are investigating mechanisation opportunities, with some ‘aggressively pursuing’ this. ‘All new mining projects that Sandvik has been involved in are being designed as fully mechanised mines, as it is easier to design a mine in a particular way from the start. So yes, there is certainly an increase in interest for mechanisation.’

Among the many drivers for increased mechanisation is a shortage of labour, he adds. ‘The skills pool for handheld rock drill operators is dwindling at a rapid rate, with most mines stating average ages for these operators at between 45 and 55 years old. Young people coming out of school are no longer interested in doing hard, physical labour. These points are forcing companies to look at alternate ways of mining involving less manual labour, which by implication is mechanisation.’

In 2015, Sibanye Gold spent R385 million on human capital development, with employees undergoing a total 7.93 million hours of training. Mbali Magudulela, vice-president of human capital development at Sibanye Gold, says that all novices who join the mine are taught a skill to start their career. ‘As they progress through the ranks, there are more opportunities for further development to complement the experience gained and enable employees to cope with their new work demands.’

Sibanye focuses on providing adult education and training, learnerships, skills programmes, portable skills training, coaching and mentorship, as well as internships and bursaries, in an effort to maintain a skills pipeline. The company also runs its own training facility in Westonaria – the Sibanye Gold Academy – which is fully accredited by the Mining Qualifications Authority. The academy manages several satellite campuses, located at each operation. Gold Fields’ South Deep mine is one of the world’s leading deep-level mechanised mining operations. Crucial to this was the upskilling of mine workers and engineers. To train its staff, South Deep runs a high-tech mechanised training centre that can accommodate 60 students across four lecture rooms and a large engineering workshop. The mine holds classroom and similar training to allow operators to familiarise themselves with the equipment before going underground.

According to Sven Lunsche, vice-president of corporate affairs at Gold Fields, poor literacy and numeracy levels pose significant difficulties as far as upskilling workers is concerned. Despite this, intensive on-the-job training, supervision and mentorship can enable some workers to improve on their current skills level, he says.

During 2015, Impala Platinum (Implats) invested 6.2% of its payroll (R456 million) in skills development across its local operations, providing an average of 86.9 hours of training per employee. In the same year, Implats’ local operations had 49 full-time bursary holders studying engineering and mining-related disciplines at university, while an additional 391 individuals benefited from apprenticeships and learnership programmes.

Implats has also seen continual improvement in its employees’ level of basic literacy. During 2015, 433 employees enrolled in adult basic education and training for part-time and full-time classes.

Dixon reiterates the importance of education with regard to improving skills. ‘South Africa has to match its primary, secondary and tertiary education curricula with the skills requirements that will be necessary 10 to 20 years from now. Education will be the driver of economic growth,’ he says.

Vogt agrees, adding that when it comes to education, government should lead the charge: ‘Education is really a role of government, and it would be good if government delivered. However, more and more often, we are finding that mining companies are addressing the problem directly by investing in colleges and the curriculum in general.’