In October 2015, the Socially Responsible Investment Index was replaced with the FTSE/JSE Responsible Investment Index Series. Corli le Roux, JSE Head of Sustainability, Capital Markets Division, says the exchange applies the FTSE Russell ESG Ratings methodology to determine which companies qualify for the responsible investment indices. These consist of a benchmark index and a Top 30 index for top performers, she says.

It enables the JSE to form part of a global universe of corporates whose disclosure practices are assessed against cutting-edge ESG factors, according to Le Roux. This will offer investors expanded opportunities to integrate sustainability considerations into their investments.

Le Roux points out that mining companies have traditionally performed well in the JSE’s sustainability index despite having to deal with the many challenges inherent to sustainability, such as those that relate to the environment, community and labour, as part of their licence to operate.

‘As a result, it has not been uncommon to see the sector stand out in its achievements in sustainability reporting. With the advent of integrated reporting, the trend seems to have continued, demonstrating that mining companies often have a clear grasp of how the various capitals interrelate.

‘Considering what steps are required to effectively manage sustainability challenges in different operational areas of the mining sector, miners need to have a clear understanding of all the risks, impacts and opportunities through risk, impact and opportunity assessments and stakeholder engagement. This is a prerequisite to operate a mine on a sustainable basis. Management also needs to devise appropriate policy approaches with clear objectives and targets, and monitor and measure compliance with policies.

‘An ongoing task to ensure the mine remains on a sustainable footing is to regularly measure progress against set objectives and targets. It is an imperative to align operations with best practice standards in terms of disclosure,’ she says.

‘The quality of integrated reports has significantly improved over the five years since King III came into force. The EY Excellence in Integrated Reporting Awards 2016 have found, among other things, improved connectedness of information and evidence of innovation in layout and structure. The articulation of business models had improved, as well as the necessary focus placed on how governance structures promote value creation. There was also a trend towards greater conciseness.’ 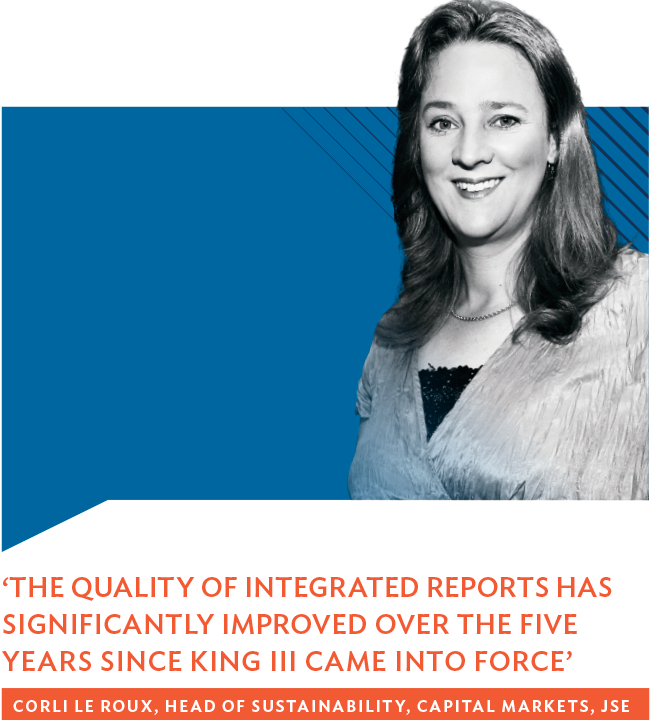 However, says Le Roux, EY also found that there was still too much emphasis on financial performance and not enough on strategy and value creation, with a lack of meaningful KPIs and a tendency to focus on compliance and positive issues rather than more balanced reporting.

SA, Chile and Australia are set to emerge as global leaders in the mining sector’s shift to embrace renewable energy as a cost-cutting, environmentally friendly power source, although getting there would be challenging for the three countries due to the remote location of their mines as well as having to operate with unreliable or insufficient grid systems.

In SA, power supply remained a key challenge for miners. Sibanye Gold, for instance, noted in a 2015 report that electricity costs increased by 13%, largely due to state-owned power utility Eskom’s annual 12.7% electricity increase, according to BMI.

The JSE is actively working on expanding its responsible investment product offering, and the strides being made by the mining industry in this regard will enable opportunities for investors in this space.