Bessie Mogale has a strong entrepreneurial gene. As a youngster, she turned a profit selling oranges given to her by her mother. Fast forward a few decades and – first with the help of a spaza shop, then a larger store, and then a mini supermarket – she provided a home for her three sons and put them through university.

Mogale is the first to admit it wasn’t just her innate flair for business that got her here. The Coca-Cola Company’s (TCCC) 5by20 skills initiative helped her navigate the formal business world after its workshop was brought to her attention by a representative of the local Coca-Cola bottler. Mogale benefited from the workshop some years back, learning basic business skills such as how to invest her money, balance budgets and manage stock inventory.

She is just one of hundreds of thousands of women profiting from 5by20, Coca-Cola’s commitment to empower 5 million women through its value chain by 2020. It’s transformed the lives of women, rural and urban, immeasurably in SA and globally.

The question is why is this is such a critical focus area for one of the world’s giant multinationals, which has fingers in many CSR pies. ‘Women face numerous barriers to establishing viable, sustainable businesses, especially in rural areas. This includes not only access to finance and markets but business skills too,’ says Camilla Osborne, communications head at Coca-Cola Southern and East Africa.

Because the DNA of TCCC is entrepreneurial, she says, ‘many of our programmes support women to run their own businesses – ultimately increasing the resilience of vulnerable communities’.

By supporting projects that economically empower women and allow them to participate in decision-making structures in society, TCCC hopes these women will become leaders in their communities. ‘We hope that by addressing issues such as financial inclusion and access to safe water [the time spent on water collection, for example, significantly impacts women’s employment opportunities], we will not only contribute to development and the provision of basic human rights but will also have a direct impact on inclusive growth, governance and security.’

Coca-Cola is in good company, with hundreds of NGOs and corporates in SA and globally homing in on this sector of society for its key role in eradicating poverty and hunger, and growing economies around the world. For obvious reason. Empowering women has the potential to transform individual lives and society overall, which is why it’s a key part of the UN’s 2030 Agenda for Sustainable Development and its Sustainable Development Goals (SDGs). Empowering women and girls is the focus of SDG 5, ‘achieving gender equality’, but it also ties into all the other SDGs, particularly the aim to improve access to skills and employment.

Research continues to show the strong correlation between gender equality and economic growth, including women’s access to education, employment and healthcare, which reduces the likelihood of household poverty. Rural women in particular are seen as key agents for development. They play, what the World Bank calls ‘a catalytic role towards achievement of transformational economic, environmental and social changes required for sustainable development’.

But this sector of society faces limited access to credit, healthcare and education among many other challenges. ‘Empowering them is essential, not only for the well-being of individuals, families and rural communities, but also for overall economic productivity, given women’s large presence in the agricultural workforce worldwide,’ according to the World Bank.

There are many knock-on effects from the subjugation of women in rural areas. Because the poverty rate is higher in rural areas, for example, girls in these areas face a greater risk of forced and early marriage. Breaking with child marriage in rural areas, where traditional authority and cultural practices are still strong, is a challenge to overcome but critical to achieve.

While gender inequality is played out in many ways, and the problem is multifaceted, one solution is to empower rural and marginalised women with skills training. ‘The importance of training rural women cannot be over-stressed,’ says Elize Bezuidenhout, deputy CEO of Business Skills for South Africa (BSSA), which aims to provide business and entrepreneurial skills to previously disadvantaged communities in order to create jobs and increase wealth.

Skills provision is in short supply in rural SA, and the current issue of rampant unemployment levels adds another layer of misery to this bleak reality. Bezuidenhout points out that with many men now working in urban areas, women are still often left behind in rural areas to care for the elderly and children. ‘Given the present challenging economic circumstances, the numbers of unemployed people is extremely high. This means that many families, especially in rural areas, are dependent for survival on the income-generating activities of women,’ she says.

The BSSA has for the past 25 years trained SMEs and business advisers in business skills, with much of this training having taken place in rural areas of Gauteng, Limpopo, Mpumalanga, North West, KwaZulu-Natal, the Free State, Eastern Cape and Northern Cape. 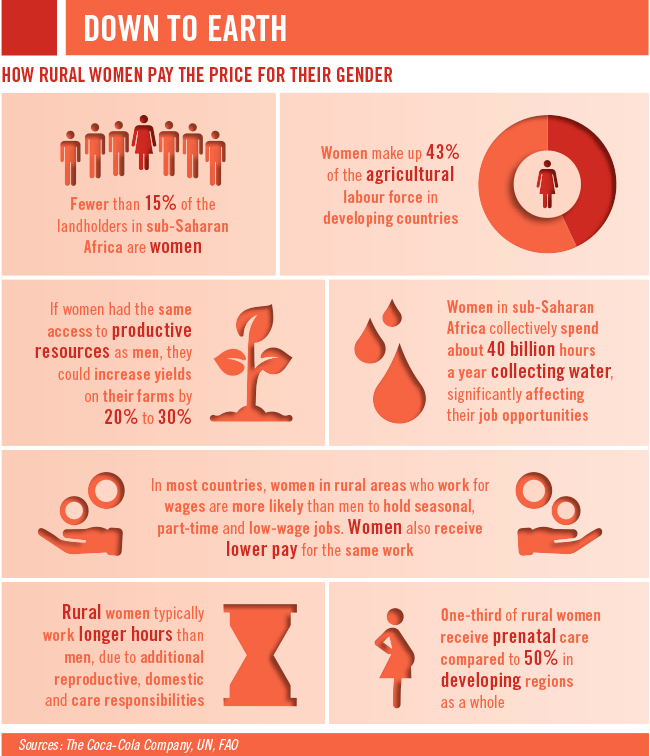 Of the more than 60 000 people that BSSA has trained since 1994, the majority (65% to 70%) have been women, who were mostly from the rural parts of these provinces, according to Bezuidenhout. ‘Over the years BSSA has become increasingly aware of the challenges facing rural women involved in business activities,’ she says. ‘For example, the market for their products or services is often limited and many of them don’t separate their personal and business finances.’

For the organisation, a recurring theme in learner feedback sessions is often that of a lack of understanding of how the market works – resulting in an oversupply of a product or service. BSSA was established by PwC, together with the National Industrial Chamber in 1992. In 2006, PwC then extended this initiative to rural women in business through a project called the Faranani Rural Women Training Initiative. Faranani has evolved to become a standout example of best practice at the vanguard of rural women’s upliftment in SA.

Over the past 12 years, the programme has assisted more than 3 500 women from six regions to improve their small businesses.

Faranani’s founder and national director is Shirley Machaba, who was recently appointed as PwC Southern Africa’s new CEO. Machaba puts Faranani’s mission succinctly: ‘It exists to unlock the business potential of rural women and empower them to generate their own income to finally become meaningful contributors to the South African economy.’

Faranani’s vision is to participate actively in skills development as part of SA’s government strategies and priorities – it’s aligned with the Accelerated and Shared Growth Initiative of South Africa, Joint Initiative on Priority Skills Acquisition, the NDP, the National Growth Path and the Nine Point Plan.

Annually, PwC funds a programme to train rural women in business skills as part of Faranani. It works to assist rural women by giving them training in, for example, management skills and how to grow their businesses. ‘This programme looks to nurture women who have the drive and desire to become business owners by providing them with the necessary know-how to get started. In other words, we seek to promote from survival to SMME status,’ says Machaba.

The training is practical, focusing on fundamental business principles such as developing a business plan; practical pricing and costing; effective financial management skills; and practical marketing.

Another standout corporate is WesBank, which, through its CSI projects, supports development initiatives directed at poverty alleviation and the development of rural communities in SA. Through its Masilimeni programme, it sets out to grow resilient networks of micro-farming households in targeted rural communities.

Empowering rural women is a key preoccupation of the SA government, as evidenced by the many strategic initiatives, as well as many more corporates and NGOs that are quietly going about doing their bit for this marginalised sector of society – and making steady progress.

They must. ‘If there’s anyone left behind, it is women and girls in rural areas,’ says Phumzile Mlambo-Ngcuka, UN Women executive director in an interview with African Renewal Magazine. ‘We want to take those at the back of the line to the front of the line. We are putting their critical issues high on the agenda, looking at different solutions, exchanging and sharing best practices.’

In SA, the collective will to empower rural women is there and government, corporates and NGOs are finding ways to make it happen.