Some 39 recipients were honoured at the 2021 JSE Spire Awards – which, says Udesh Moodley, Head of Bonds, Currencies and Interest Rates Derivatives at the JSE, ‘is a tribute to their fortitude in these difficult and volatile times’, referring specifically to the impacts of COVID and lockdown over the past two years. ‘During the initial onset of COVID-19 in 2020, we had seen significant panic and falls in volume, as well as trading activity, but we are beginning to see a return to normality, with activity reaching pre-pandemic levels’.

The 2021 JSE Spire Awards ceremony celebrated its 20th year on 31 March. Held virtually for the second year, across the broader financial ecosystem, it is considered one of the most successful finance-award ceremonies in SA, recognising accomplishments in the fixed-income and derivatives markets. It is largely acknowledged as the benchmark for SA markets, with votes cast by the largest of institutional investors.

Moodley confirms that the Spire Awards is a significant measure of performance, ‘more so because it gives the candidates an invaluable view of their performance versus that of their competitors’. The awards also form part of traders’ key performance measurements, in terms of their contributions to their relevant organisations. The votes, which are cast online, are verified by research consulting firm Intellidex, which was appointed by the JSE in 2018.

This year the most anticipated award, as it is every year, was that of Best Fixed-Income and Forex House, which was won by Rand Merchant Bank (RMB). ‘It was a very close competition, with RMB narrowly beating its two competitors, Absa CIB and Standard Bank,’ says Moodley. 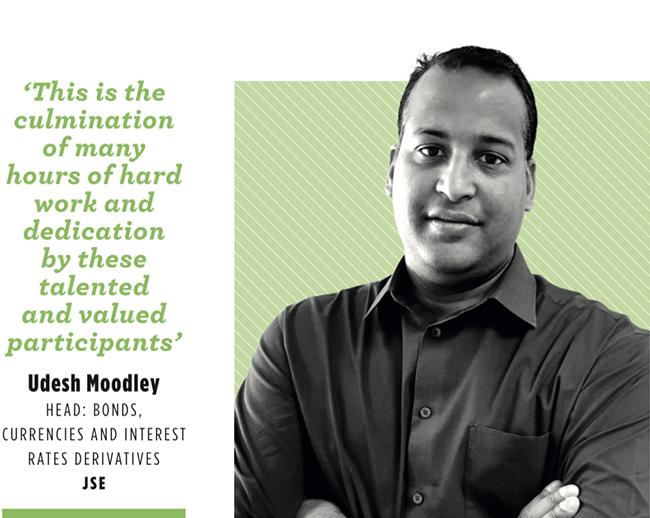 ‘These awards are taken extremely seriously in terms of representing the pinnacle of performance in the capital markets,’ says Moodley. ‘The Spire Awards is well attended by stakeholders, including traders, analysts, treasurers, executives and other senior financial market professionals across the broad financial-services industry, including banks, brokerages, state-owned companies and National Treasury.

‘This is the culmination of many hours of hard work and dedication by these talented and valued participants, who really highlight the key role that capital markets play in our country’s economic development.’