President Cyril Ramaphosa has on many occasions acknowledged the importance of boosting the small-business sector, saying that to achieve economic reconstruction and recovery post-pandemic, SA needs to support the growth of vibrant and sustainable SMEs more effectively.

Collectively, SA’s SMEs account for around 98% of all businesses, according to McKinsey & Co. They also make a significant contribution to the country’s GDP, and are responsible for creating and sustaining several millions of jobs. The Johannesburg Business School at the University of Johannesburg estimates that SMEs provide employment to roughly 47% of SA’s workforce, with their total economic output accounting for around 20% of GDP.

Of particular importance are SMEs in rural areas. By 2030, the NDP intends to ensure that rural communities enjoy better opportunities to participate fully in SA’s economic, social and political life. But we are a still a long way from this ideal.

Jannie Rossouw, a professor at Wits Business School (WBS) at Wits University, calls rural development in SA ‘essential’, as much of the poverty experienced in the country manifests in these areas. As is the case in the rest of SA, rural areas suffer the consequences of load shedding, says Rossouw, though they are particularly hard hit, because residents do not have the same options as people in metropolitan and other urban areas. ‘These are also the areas that suffer the most as a result of state capture and corruption in South Africa, as improvements to and expansion of infrastructure do not take place. Money earmarked for these areas is simply stolen.’ Thus, all initiatives to accelerate rural development must be welcomed and supported, he says. ‘Alleviating rural poverty will support education in those areas, thus helping to alleviate unemployment in the long run.’

Sasol has a strong focus on developing SMEs, as well as supporting black- and women-owned enterprises. The company’s commitment to preferential procurement has seen it exceed the Department of Trade, Industry and Competition’s BEE-compliance targets, spending with 51% black-owned businesses. Sasol’s expenditure with black-owned suppliers amounted to R23.8 billion for the 2021 financial year, two-thirds of which was with black women-owned businesses in its supply chain. 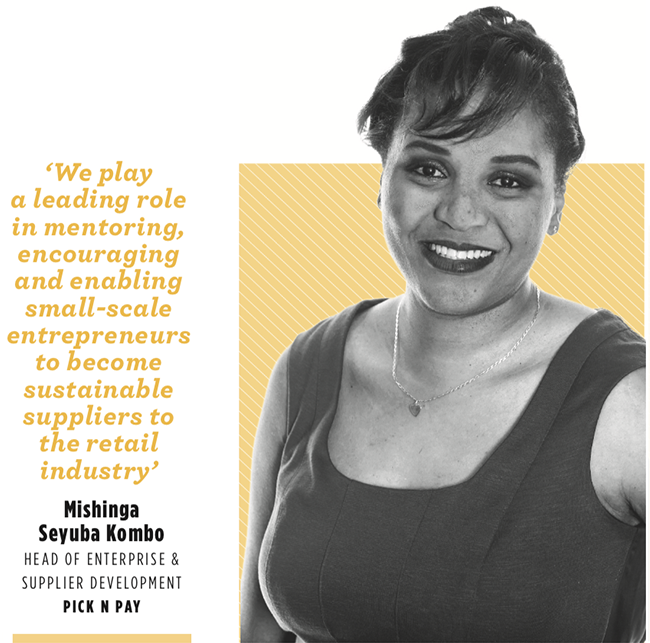 Among Sasol’s successful initiatives is its Small Business Centre in Secunda, established two years ago to support emerging SMEs whose operations are based in the region. The office space, complete with high-speed internet access, provides local SMEs with access to colour printing, copiers and scanners, specialised software for technical requirements – such as industry-specific engineering and design software – and telephone services. SMEs also have access to fully furnished working spaces, a boardroom and meeting rooms.

Phelelani Mbhele, enterprise and supplier development manager at Sasol’s Secunda operation, says the facility delivers a very important function and ‘massive value’ to SMEs in the region. ‘Some of the most common gaps that we have seen start-ups struggle with are effective communication mechanisms, accessing Sasol’s systems and responding to RFQs [requests for quotes], and the office has been designed to address these.’

Sasol has also done extensive work in the agri sector. In collaboration with partners, the company funded the training of 110 young local emerging and subsistence farmers from the Gert Sibande District Municipality to enable them to gain technical, financial and business skills.

They also receive instruction on farm business management, vegetable cultivation, and animal and poultry production. On completion of their training, these emerging farmers are mentored and assisted in setting up farming enterprises of their own.

The fund will allocate R300 million to agricultural development to assist black-owned emerging farming enterprises to upscale their businesses and ensure that they get the opportunity to integrate into the value chain. It will also allocate R100 million to SMEs to provide incubation and technological support to those small businesses that can supply their goods or services to PepsiCo or its partners.

One inaugural project the fund is supporting is the Farmer Development programme run by Grain SA. To date, R17 million (50% from the Kgodiso Development Fund, and 50% from Standard Bank South Africa) has been invested into the project, providing funding for 11 grain farmers, two of whom are female.

Mishinga Seyuba Kombo, head of enterprise and supplier development at Pick n Pay, says that as one of the country’s largest retailers, Pick n Pay has embraced the opportunity to ‘make a real impact in promoting smart, sustainable and inclusive food supply chains’. The retailer procures just more than 95% of its food and groceries locally, supporting many local businesses.

‘Through our ESD initiatives, we play a leading role in mentoring, encouraging and enabling small-scale entrepreneurs to become sustainable suppliers to the retail industry,’ says Kombo.

‘In our last financial year, our spend on SMEs increased by 14% to R5.4 billion. We regularly identify a diverse pool of entrepreneurs with innovative product concepts or start-up enterprises, including rural and women-owned businesses, to bring our customers the very best produce offering. Entrepreneurs in the programme are sup-ported with mentorship to navigate becoming a supplier to a big retailer, and preferential payment terms to assist their cashflow.’

A good example in action can be seen in Magapa Phaweni, owner of Wensleydale Farms. Phaweni joined Pick n Pay as a supplier through its ESD programme in 2017 with just five products, but now supplies the retailer’s stores nationally with 13 products. She is also the largest contributor of organic vegetables to Pick n Pay. ‘By working together with Wensleydale Farms we have been able to offer our customers a growing organic range of vegetables. And, in the process, Magapa has grown her business and created more jobs in the community where her farm is based,’ says Kombo. 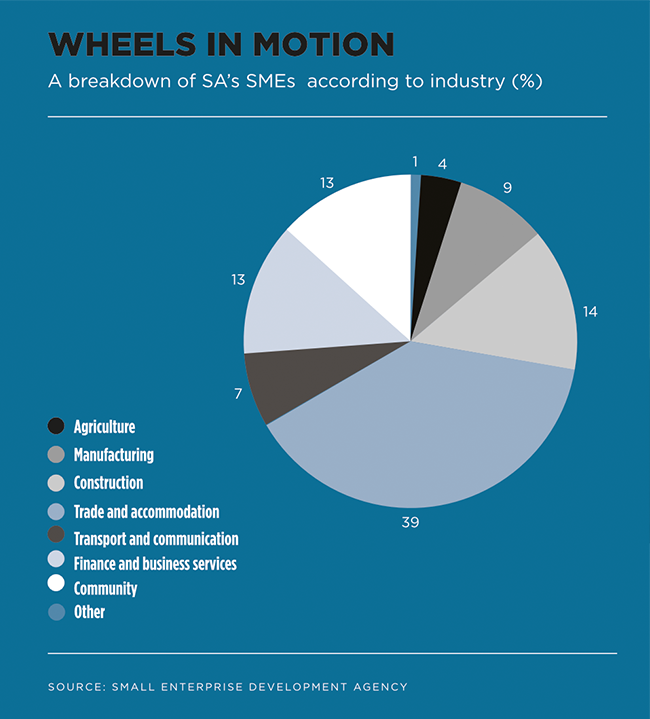 ‘By empowering one entrepreneur, you are effectively equipping a small-business owner to empower more people – through job creation, skills development or community-outreach programmes.’

Another initiative that has seen great success is Pick n Pay’s market store programme, run in conjunction with provincial governments and other funding partners.

These independent township traders benefit from Pick n Pay’s supply chain and systems capability, as well as value-added services and loyalty programme. It is a prime example of entrepreneurial passion and successful public/private sector partnerships in action.

Coca-Cola Beverages South Africa’s (CCBSA) Mintirho Foundation develops historically disadvantaged farmers and small suppliers into sustainable participants in the commercial agriculture value chain. Since its launch in 2018, the foundation has successfully disbursed more than R343 million across 26 beneficiaries. Additionally, more than 1 540 new jobs have been created, with 57% of these employees being black women.

‘In recent years, farmers, particularly black emerging farmers, have faced significant obstacles and we have sought to provide the necessary financial and technical support to ensure they not only remain in business but are successful in the long term,’ says Velaphi Ratshefola, MD of CCBSA.

‘With the right support, women, youth and black farmers can meaningfully participate in high-value agriculture and sophisticated value chains, both locally and internationally,’

Ten of the beneficiaries are women-owned agricultural enterprises, which have received funding to the value of R98.2 million. Most beneficiaries have seen their businesses grow significantly with the foundation’s support. One KwaZulu-Natal beneficiary, who grows sugar cane, vegetables and avocados, has developed its business from a R12 million operation into a R39 million enterprise in only three years. 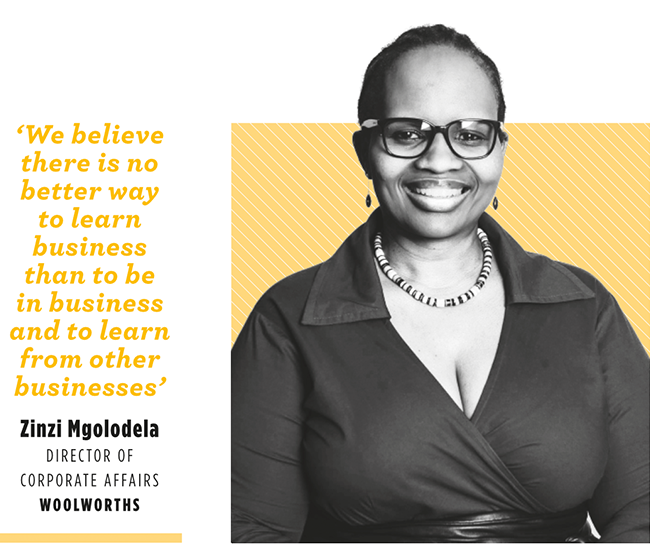 Zinzi Mgolodela, director of corporate affairs at Woolworths, says SMEs are vital to the country’s economy as they create jobs. They are equally important to Woolworths as they provide flexibility, she says, which allows the retailer to ‘continue innovating with quick response to market demands’. Mgolodela adds that it’s a mutually beneficial relationship, the benefit being inclusive growth – a win-win for all. ‘We have the greatest respect for what the entrepreneur already knows, and see technical know-how on the part of the lead entrepreneur as the single-most important success factor in developing an enterprise that can grow from small to medium and then scale to large in a relatively short period of time.’

The support Woolworths offers SMEs is much more than financial. ‘In general, rather than emphasising funding requirements such as capital, we prefer to be flexible, offering financial and other support that makes sense in the specific circumstances,’ says Mgolodela. ‘Sometimes this entails innovative means such as facility sharing, cashflow support or linkages with other enablers such as established suppliers, SME financiers or other like-minded partners.’

In the past financial year, Woolworths contributed more than R2.4 billion towards the revenues of SMEs in its supplier base, some 9.85% of total procurement. Within its ESD programme, Woolworths has a range of black- and black women-owned SMEs as ESD beneficiaries, all in varying stages of growth and development.

One of these is the De Fynne Nursery, founded in 2001 as a ‘backyard’ nursery by agriculturists Elton Jefthas and Jacky Goliath, and which has grown from an operation of just 1 000 plants into a 22 ha farm with more than 600 000 plants. The nursery is 100% black-owned and 50% black women-owned, and has established itself as one of SA’s fynbos and agricultural seedling growing experts. De Fynne Nursery has been supplying Woolworths since 2012 and is a beneficiary of its ESD programme. As part of this, the aim is for it to become one of Woolworths’ major suppliers of ornamental and fruit-bearing plants. Essential infrastructure and a growth plan have been put in place to successfully scale up operations to meet this goal.

Asked why she thinks it is important for large organisations to support SMEs, Mgolodela says that ‘access to market is paramount, and although there is plenty of development being done by large business, we believe there is no better way to learn business than to be in business and to learn from other businesses’. She adds that SMEs need more procurement opportunities set aside for them to help them participate and grow within large supply chains.