Portugal is recovering from the effects of the pandemic faster than many of its European counterparts. With a 98% vaccination rate in the mix as a bonus, its aligned rate of economic recovery has allowed the country to continue growth that was kickstarted in 2014 by deep structural reforms.

Quoting data from the National Institute of Statistics, Reuters reports that the country’s economy grew 2.9% in the third quarter of 2021 from the previous quarter. The Bank of Portugal projects that the economy is expected to grow 5.6% in 2022.

Foreign investment continues to flow into its manufacturing and tourism sectors, while 60% of the country’s power comes from renewables, says Guilherme Lopes, economic and trade counsellor at the Portuguese Trade and Investment Agency. He explains that notable trade agreements between SA and Portugal, as part of larger jurisdictional agreements, include the economic partnership agreement signed between the EU and SADC in 2016. The agreement, according to the European Commission, is ‘development-oriented’, creates ‘improved opportunities for trade in goods’, and also makes provision for ‘geographical indications’.

The EU will, for example, protect brands such as rooibos tea and various wine names from the Stellenbosch and Paarl regions. In return, SA will protect more than 250 EU brand names, including those in food, wine and spirits. ‘Portugal is looking to focus on its machinery, pharmaceuticals and footwear industries to export next year, for exports to South Africa,’ says Lopes. ‘These three sectors in particular show potential for growth.’

Historically, the main exports out of SA to Portugal have been in agricultural commodities. The country was the top southern-European importer in 2020 for fruit and vegetables from SA, says Lopes, accounting for more than 1 300 tons of citrus, and ranking third in the EU, after the Netherlands and Germany, as the biggest point of entry for these exports. 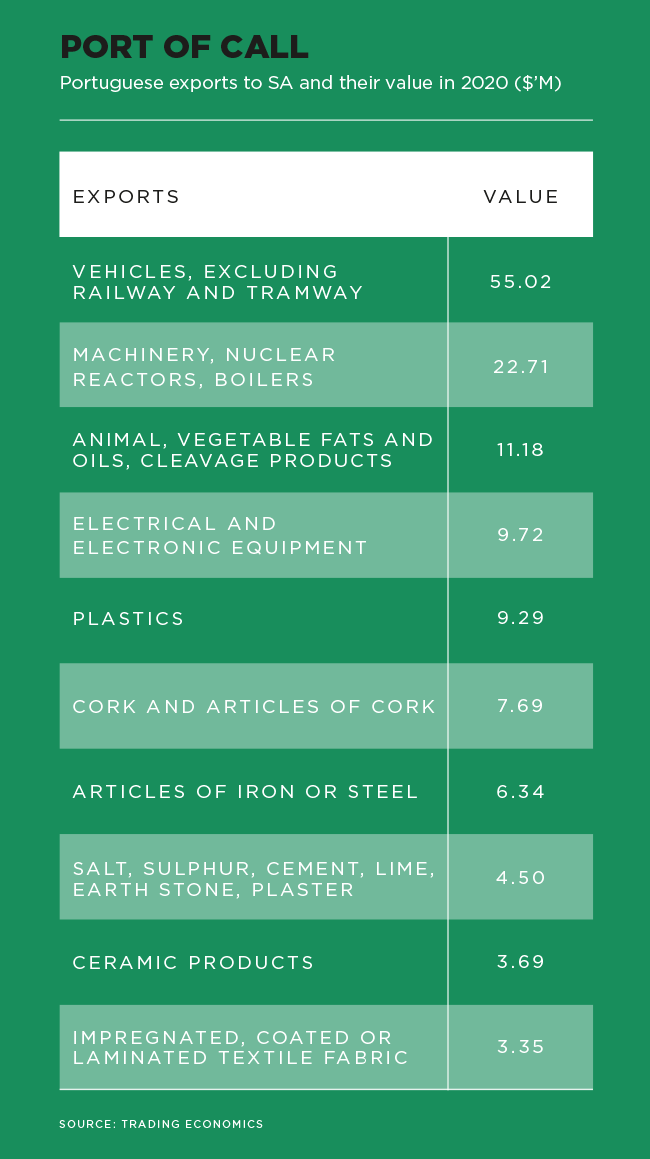 The SA fruit export sector had a tough 2021, mainly due to the global shipping crisis, costly phytosanitary measures required by the EU, and operational challenges in the country’s ports, says Paul Hardman, acting CEO of the Citrus Growers’ Association of Southern Africa in a media release. Despite these challenges, the industry managed to increase exports globally by 18.6 million cartons of citrus compared to the year before.

‘South African citrus exports reach Europe mainly through the Netherlands and ports in Portugal,’ says Lopes. ‘From there, the fruit is exported to other countries in the EU.’ He believes there’s an opportunity for both nations to develop the logistical value chains in these regions. ‘It will make Portugal one of the biggest re-exporters of fruit, also adding value to these commodities exported from South Africa,’ he says. ‘It’s something we’re working on.’

Notable vehicles coming out of Portugal are the Toyota Land Cruiser 70 series and Hilux models. According to figures by Caixa Bank, a Spanish multinational financial services company, the automotive sector in Portugal accounted for 8.5% of GDP in 2019, and for 0.7% of total employment in the country. ‘Currently, the Toyota [Ovar] plant has around 200 employees, and with an assembly line dedicated to the production of the Toyota Land Cruiser 70 series, which is exported to the South African market, having finished last February with the cumulative production of 300 175 units,’ according to Toyota’s website.

‘Portugal doesn’t have many mining companies,’ says Lopes, with the exception of Mota-Engil. The company recently signed a €240 million with Black Mountain Mining for preparation, excavation and transport at the Gamsberg zinc mine in SA’s Northern Cape, as reported in International Mining. The project started in April 2021 and has a maximum duration of 96 months. The Gamsberg project sits on one of the largest known undeveloped zinc orebodies in the world. ‘With this new contract in an area of increasing importance for the group – mining services – Mota-Engil Africa sees its order book strengthened to a record level, supporting a level of sustainability of the group in this period of major challenges for companies due to the global economic context,’ according to the contractor.

Other notable Portuguese companies in SA include Amorim Cork in Stellenbosch, CR Moulds in Gqeberha, and global logistics provider Rangel in Johannesburg.

Before the latest COVID-19 developments, the OECD was upbeat about Portugal’s future prospects, noting that consumption would strengthen and lockdown measures would continue to be relaxed. A bustling manufacturing sector and the absorption of EU funds would also support investment and exports. ‘Tourism and contact-intensive services will recover only gradually until the pandemic is fully under control,’ it states.

Lopes says one of the most remarkable investment streams coming from SA has not necessarily been through private institutions but from SA individuals pushing their money into the country through visa investment schemes. ‘It’s very interesting to see that investments from South Africa are not represented by huge companies but by many individuals that want to be invested in Portugal.’

Andrew Rissik, international director at Sable International, says it’s been a record year for the Golden Visa programme. ‘Many of our clients have bought more property, and many of them have physically relocated, while others have invested in businesses or are looking to set up a business in Portugal,’ he says. 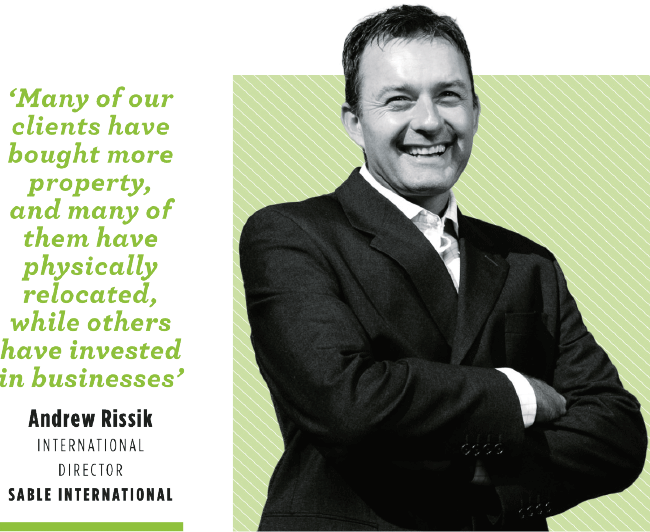 Portugal’s Golden Visa gives holders the right to residency in the country for themselves and their families at any time, even while living abroad. Rissik says his company has assisted close to 300 South Africans in this investment residency programme; the real-estate investment option being the most popular. Property investments have typically shown returns between 2.5% and 5%, but it’s heavily dependent on various factors, says Rissik. ‘There’s no sign that the market is cooling off at the moment but it may start flattening over the next year.’

Investors who seek access to residency in this way have to hold onto their investment for a minimum of five years, but Sable advises that clients hold on until they are granted nationality. The programme enables dual citizenship, meaning investors can hold both SA and Portuguese passports, while retaining their tax residency in SA.

Among EU nations, Portugal is one of the most dependent on tourism, with the sector representing 17% of its entire economy, as reported by Bloomberg. In September 2021, Secretary of State for Tourism Rita Marques told the publication she expected tourism revenue to bounce back to pre-pandemic levels by 2023.

Its tourism industry showed an 11.9% surge in international tourist arrivals between 2014 and 2018, and a 7.5% increase between 2017 and 2018, according to the OECD’s Tourism Trends and Policies 2020 report. Lopes says Portugal saw an increase in tourists from SA, pre-lockdown, adding that ‘the two countries have a lot in common when it comes to tourist attractions, especially the Western Cape in South Africa’.

The regulatory decisions that affect inter-EU and US travel will decide the extent of the impact of the fourth wave of COVID-19. But the fact that the Portuguese population is among the most vaccinated in the world already puts the country in good stead to weather the next storm, and, in doing so, to continue its strong trading partnership with SA.