Crayfish over an open braai, super-saturated white beaches, wind-worn fisher cottages … and that lagoon. And inland, ochre crags and hidden valleys. Clichés, no question, though happily most of them are still relevant today. Now the region is seeing an uptick in cutting-edge design, notable cuisine and a burgeoning wine culture, all driving a gradual, careful evolution. And the trajectory is upwards.

Much of the Cape West Coast – from north of Melkbosstrand to Strandfontein and inland to the Cederberg – remains a rare treat; small communities that relish their status as partially forgotten. But it’s also 2022’s region to watch, suggest the trend forecasters. 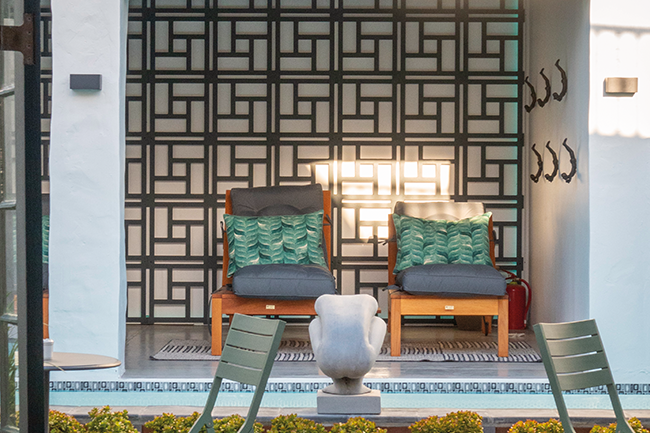 Abalone Hotel and the Beach House Zonnestraal, Paternoster
Paternoster is the de facto trendy capital of the West Coast. Capital only in reputation though – for all its fame it remains a fishing village where nothing’s open after 5 pm and traditional life is just under the whitewashed surface. Wolfgat, Kobus van der Merwe’s celebrated 20-seater restaurant, is responsible for much of the recent notoriety, his sustainable menu drawing visitors from far and wide.

Two very different properties recommend themselves in Paternoster. Abalone Hotel and Spa, on the beachfront, is large but hardly cookie cutter; intriguing and unexpected touches abound in the recently refurbished, spacious, thoughtfully designed suites. And for those who can’t face the cold Atlantic, the central poolside courtyard is a boon, and always popular in summer. Equally relaxing is the Healing Earth Spa offering a fusion of African and Eastern treatments.

Further down the shore, Beach House Zonnestraal marches to an entirely different drum. Designed to marry traditional West Coast fisher cottage and contemporary expectations, the space is a master class in creative harmony. Self-catering certainly, but in the best Masterchef tradition of open plan, friends-friendly flow. Kitchen, living area and a patio leading on to the beach all integrate so foodie evenings are a joy of coming and going, wine in hand. Zonnestraal accommodates eight, with the option of another two at a push. Sublime.

Indigo Blue Beach House and the Boat House, Langebaan
Langebaan’s attractions are legend – houseboats, octopi and sunburnt memories in the lagoon, the historic cottages of Churchhaven and the West Coast National Park. And serving all this is a rich array of accommodation, from budget to 5-star. Chief among the luxury offerings is Indigo Blue, a three-bedroomed beachfront house that’s hugely popular with the Gauteng glitterati.

Understandably so – the two huge living areas invite summer flop-and-drop sessions, and the wind-protected courtyard begs to be used for endless braai evenings. And all the time there’s that lagoon view, a stretch of water good for safe wading, paddling, kayaking and carefree floating.

Slightly further inland is the Boat House, close to the yacht club in the old part of town. It’s a larger property, seven en-suite bedrooms, ideal for large family or friend getaways. The design is contemporary chic, and central to the Boat House’s appeal is the sheltered pool area, beautifully designed, complete with wood-fired hot tub and sun loungers. 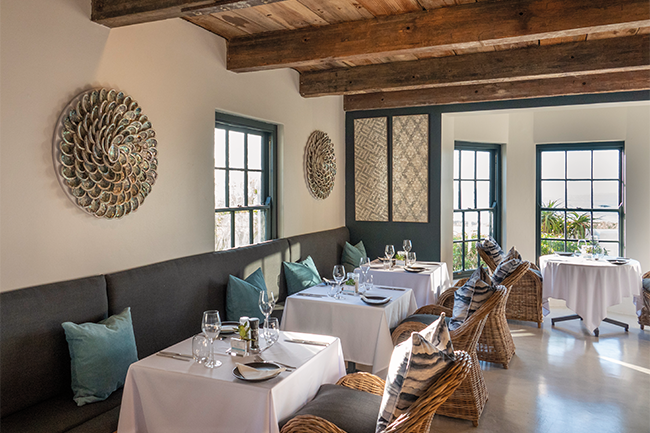 The Lighthouse, Yzerfontein
Yzerfontein’s appeal is its proximity to Cape Town, just 90 km up the coast. Sixteen Mile Beach, the West Coast National Park, Dassen Island and the short drive to Pieter-Dirk Uys’ hometown of Darling also recommend it. The town effectively has two coastlines, the harbour inlet area, which is calm and protected, and the wilder southern beach towards Schaap Island.

The Lighthouse is on this wilder stretch, an intriguingly designed five-bedroomed house on the beach which brings to mind the Cape Cod clapboard homes of the Pacific North East.

Grotto Bay Beach House, Grotto Bay
The only West Coast community further south than Yzerfontein is Grotto Bay, a tiny collection of remote houses next to the Grotto Bay Private Nature Reserve, mostly used for holiday lets. Grotto Bay Beach House is the most luxurious of these – beachfront accommodation par-excellence with its wrap-around stoep, outdoor pool, hot tub and private beach. It’s big; seven bedrooms and seven bathrooms mean a large group of friends or family can stay the weekend without getting in each other’s way.

Cederberg Ridge Wilderness Lodge, Clanwilliam
Owner Kate Bergh’s careful curation of Cederberg Ridge exemplifies this move upmarket: contemporary design, excellent cuisine, world-class service and a sense of exclusivity that’s hard to beat out here. It’s on the outskirts of Clanwilliam, before the Pakhuis Pass, traditionally the start of the Cederberg. The lodge, perched on the top of its namesake ridge, has beautiful views across to the pass and the towering peaks beyond.

Suites are strung out from the strongly contemporary main building in the mountain fynbos and combine the best of international design and the archaic majesty of the views.

Cederberg Ridge is owned by 10th-generation locals, meaning their knowledge of drives, walks, the town of Clanwilliam and the wider area is first class. Guided or solo cycling is popular, as is the spa. The fine-cuisine restaurant is open to the public for dinner. Some come for the cutting-edge contemporary design, some for the pampering, others for the food. Many, however, come for the natural abundance – spend an afternoon walking or riding through the fynbos (guided or not) and the soul of the Cederberg reveals itself. Quite the most relaxing outing imaginable.

Bushmans Kloof Wilderness Nature Reserve, Cederberg
Down the same road as Cederberg Ridge, deep into the Cederberg region, is the grande dame of the area – the Tollman family’s wilderness reserve, synonymous with luxury, quiet and gracious living. It’s difficult to believe it has been around for more than 30 years, but the enormous fig tree over the breakfast deck bears testament to a good few decades of careful curatorship.

Bushmans Kloof is internationally renowned, but the owners work hard to keep the local market part of the family. Regular specials attract Capetonians and others keen to escape and indulge in a spot of archaic pampering.

A quick refresher: the property sits in the middle of a private 7 500 ha Cederberg reserve and is known for its spacious villas, rock art, spa and farm-to-table kitchen.

Most exclusive of the accommodation options is Cederberg House, once the Tollmans’ private residence – expansive, private, gloriously situated with views from the patio down the valley, towards the distant ochre rock faces. There’s a choice of butler service, meals in your villa or even a private chef. It’s not uncommon for guests to check in and not be seen for the rest of the weekend. Getting out is a good idea though. The wilderness a treasure trove of rock art, botanical diversity and hidden histories. One such history has been cleverly moulded into an evening out – the Kadoro Dinner is a trip to a beautiful stone shepherd’s cottage on the reserve, all lit up with hundreds of candles. Stories of the cottage and the shepherds are told around the campfire as the sun sets.

The cooking happens outside and in a separate kitchen, food then served in the candlelight, a fusion of traditional Cape cooking, new ideas and plenty of the West Coast’s finest wines. And after dinner the stargazing is extraordinary, experts revealing the southern sky in all its majesty. 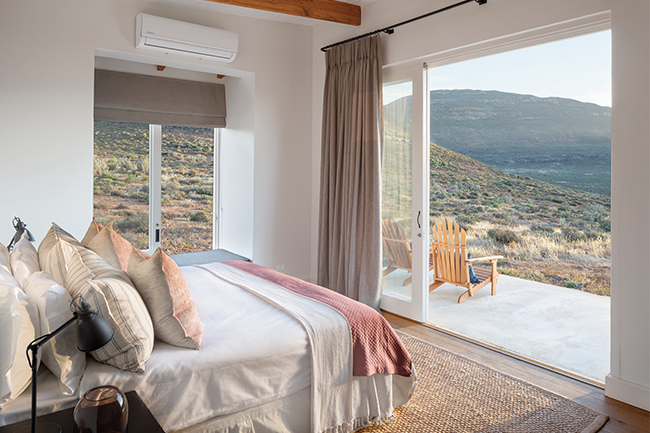 Petersfield Mountain Cottages, Citrusdal
Hedley Peter is something of a legend up the West Coast. The long-time owner of Petersfield, he’s overseen the integration of a successful accommodation business into his family’s larger citrus farm. The idea is simple – high up in the mountains and in the kloofs where fruit trees cannot grow, he has built four wholly independent, off-the-grid cottages that offer luxurious, entirely private escapes.

Each cottage is fully equipped, sensitively decorated and angled so that it can’t be seen by the other units. Of the four remote houses, Die Veepos is the stand-out, a beautifully designed three-bedroom unit with a wide veranda, pool and exquisite views of the surrounding fynbos and red-rock koppies.

The Manor House, Kleinkloof Farm, Piketberg
Further south, towards Cape Town, Piketberg is one of the West Coast’s most picturesque towns, set as it is on the slopes of Piketberg mountain with views across the valley to the Winterhoek mountains. Just outside town, towards Eendekuil, is Kleinkloof, one of the region’s historic olive farms, recently revamped and now offering five cosy cottages for weekend visits. The units are repurposed worker’s cottages, each with its own garden and pool. But the heart of Kleinkloof is the four-bedroomed Manor House, also available to rent. What a home. The views are spectacular, the design a breath of fresh air – the owners are committed mid-century modernists – and the sense is of a voluminous, intelligently curated family seat. Magnificent.